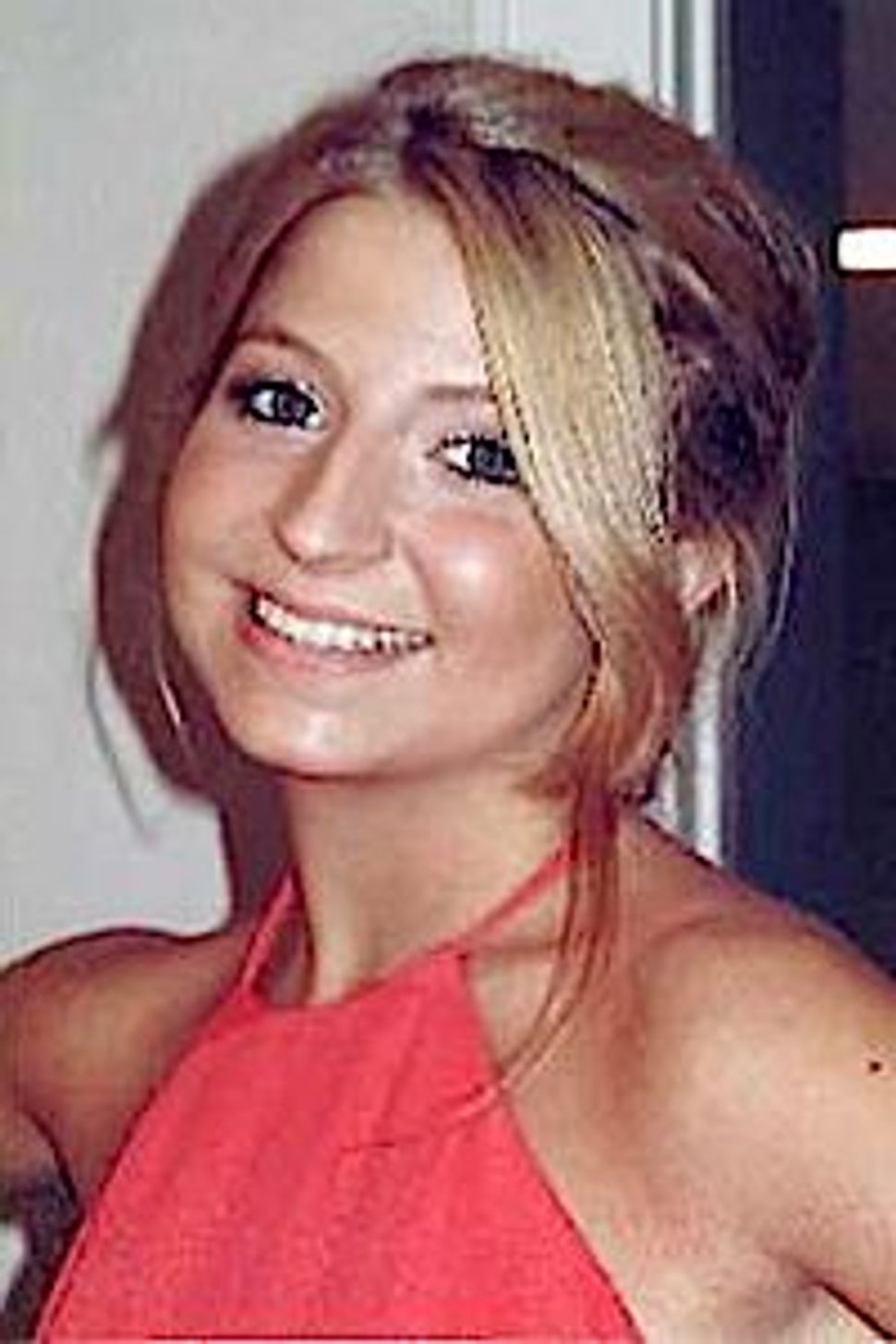 The synagogue where Lauren Spierer became a bat mitzvah, and the Jewish campus center that she frequented are among the groups leading the effort to find the Indiana University sophomore, who has been missing for nearly two weeks.

Police say that the 20-year-old Spierer was last seen walking home from a friend’s apartment in the early morning hours of Friday, June 3, following a night out with friends; she was reported missing about 12 hours later. Her parents arrived the following day, telling the Bloomington, Ind. police department that Spierer had a heart condition that necessitates daily medication.

Within two days of Spierer’s disappearance, the Hillel Center at Indiana University was organizing search efforts on behalf of the Scarsdale, N.Y., native.

“The Jewish community has played an important role in helping to organize searches and other activities to support the family,” Harold Goldsmith, Indiana University’s Dean of Students, told the Forward.

Spierer has long been an active member of the Jewish community. Her family belongs to Scarsdale Synagogue — Temples Tremont and Emanu-El, a Reform congregation in Westchester County. At college, Spierer attended gatherings at the campus Hillel, and she spent spring break this year planting trees in Israel on behalf of the Jewish National Fund.

Rabbi Susan Silberberg, Hillel’s executive director, is overseeing twice-daily searches, conducted by Hillel staffers and Indiana University students. The Hillel groups, which provide maps and supplies to the hundreds of people who join the search each day, are working closely with Bloomington, Ind., police to determine which areas to target.

The police say they have no major leads, but suspect foul play.

Local businesses are also contributing to the search: The Smallwood Plaza apartment complex, where Spierer lives, is loaning Hillel a vacant coffee shop to use as the search headquarters; a copy center is printing maps of the area and missing person flyers free of charge, and local restaurants are donating food and water to the volunteers.

The National Center for Missing & Exploited Children and Equusearch, two nonprofits devoted to finding missing persons, have joined the search at the request of Bloomington police, and are coordinating with Hillel.

“There’s been an outpouring of support. Everyone just wants to find her and wants to help,” Silberberg said. Avi Katz, an Indiana University student who is active in Hillel, helped the Spierer family create a website, Facebook page and Twitter account devoted to raising awareness about Spierer’s case.

The Twitter hashtag identifying tweets about Spierer, #FindLauren, is trending all over the country, thanks in part to re-tweets by celebrities, such as reality television star Kim Kardashian and newsman Anderson Cooper.

This buzz has helped generate nearly 1,000 tips and attract mainstream media attention to her disappearance. The case was featured on the television show “America’s Most Wanted” on Saturday, and Spierer’s parents, Robert and Charlene, have appeared on local and national television news programs to ask the public for help and to offer a $100,000 reward for information leading to her discovery.

“If the person who has Lauren is out there, we ask you to please let her go,” Robert Spierer pleaded during a recent interview on NBC’s “Today” program. “Let her come home. We love her. She’s our baby and we want to get her back.”

The family spends much of its time at the search headquarters working with volunteers and surrounded by friends. Many of these friends are members of the Scarsdale Jewish community. The family’s rabbi, Stephen Klein, arrived Monday, after hosting prayer vigils at the Scarsdale Synagogue — Temples Tremont and Emanu-El.

“We’re doing whatever we can to help,” he said. “Lauren is very important to us. Just a sweet person to share with, to speak with, to be with.”

Additional support has come from members of the Indiana University Chabad House, who have been helping with the search and delivering Sabbath meals and candles to the Spierers. “I make sure to go there and show my face and see if they need anything,” said Zlata Chincholker, the director of the Chabad House. “But mostly I pray for Lauren.”