Jewish Athletes Reach for the Gold

As the world gears up for the 2008 Summer Olympics, the Forward has taken note of a handful of remarkable Jewish men and women who will compete in Beijing. Our roundup reflects the diversity of Jews from around the world participating in the games from August 8 through August 24. 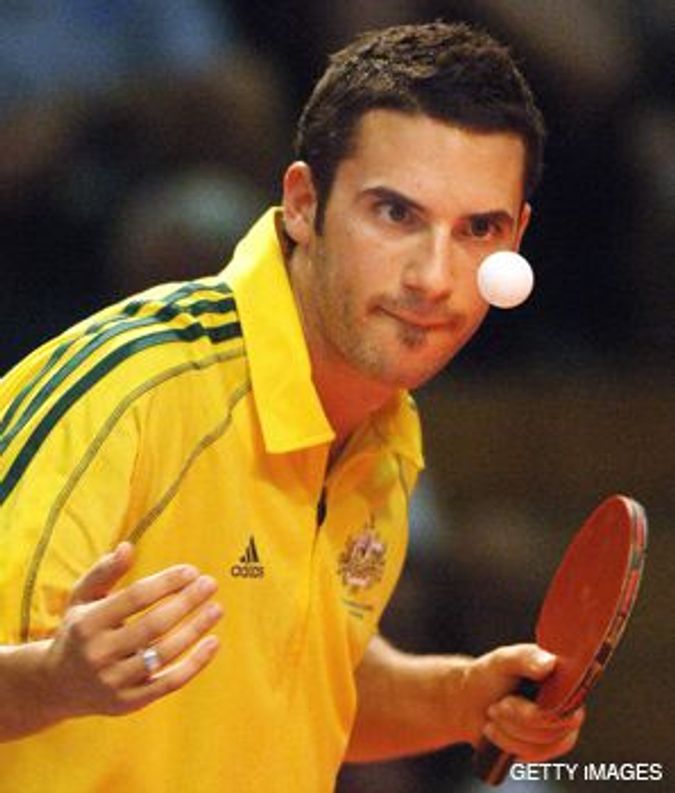 For a typical medical student, balancing schoolwork with extracurricular activities is a difficult feat. For 27-year-old David Zalcberg, who will receive his medical degree this year, it means leaving time in his busy schedule to train for the Beijing Olympics. As a rising table tennis star in his native Melbourne, Australia, Zalcberg is excited to play in a country where table tennis is a popular sport.

“To go to the Olympics where you are playing the premier sport, it’s what you always dream about as a kid,” he told Australia’s Herald Sun in July. “That’s why for me, qualifying for Beijing was so important.” Zalcberg will compete in the singles and doubles competitions in Beijing.

At the 2004 Olympic Games, Zalcberg finished 17th in the doubles competition and was a gold medalist in Oceania’s 2004 games. His highest international ranking came at the World Teams Championship in 2004, where he placed 37th. In 2007, he was ranked Australia’s fourth best male table tennis player.

Zalcberg is a graduate of Mount Scopus Memorial College, the first co-educational Jewish day school in Melbourne, and was named Maccabi Australia’s 2007 sportsman of the year.

Deena Kastor, an American marathon runner who took home the bronze in 2004, will be competing this summer in Beijing. It’s her third time at the Olympics and her second Olympic marathon. She is described as a “record wrecker” on NBC’s Olympics Web site, and she is America’s top female marathon runner.

Kastor, who grew up in Agoura Hills, Calif., and ran for the University of Arkansas, has recently focused on distance running and has won marathons in Chicago in 2005 and London in 2006. She set the record for the United States in London, where she ran the 26.2-mile race in two hours, 19 minutes and 36 seconds. In 2006, Track & Field News magazine selected Kastor, 35, as the world’s top women’s marathoner.

Two-time Olympic gold medalist Nicolás Massú earned his nickname, Vampiro (Spanish for vampire), for his intensity on the tennis court. Sure enough, this Chilean-born 28-year-old tennis player is nothing but a fighter.

Born and raised in Viña del Mar, Chile, Massú made history by giving his country its first ever gold medal in the 2004 Olympic Games with his doubles partner, Fernando Gonzales. The following day, he captured his second gold medal in the singles competition.
Though Massú’s ranking of 131st was too low to qualify him for an Olympic seat, the tennis player was one of 12 athletes awarded special places by the International Tennis Federation to participate in the singles competition in Beijing.

Introduced to tennis when he was 5 by his grandfather, he became a competitive junior tennis player and entered the professional circuit in 1997, at the age of 18. Raised Jewish, Massú competed in the Maccabi Games in Israel in 2001.

For someone who started running at the age of 36, an Olympic bid does not seem like a plausible option. But 53-year-old Haile Satayin, a native of Ethiopia, will be one of the oldest athletes to compete in the Beijing Olympics in August.

Though he took up running only after he was airlifted to Israel during a humanitarian mission in 1991, he has since won dozens of Israeli national titles and competes regularly on the European circuit. In 2003, he recorded his best marathon time at a competition in Venice, where he finished in two hours, 14 minutes and 21 seconds. In 2004, Satayin traveled to Athens to compete in the Olympic marathon race, where he finished 20th.

In a June interview with NPR, Satayin told Israel correspondent Linda Gradstein that living in Israel made him gain weight, so he took up running as a way to slim down. But according to his running partner, Satayin is a natural. A father of eight, Satayin resides with his family in the Israeli town of Hadera.

At a towering 6 feet, 9 inches, rower Josh West, 31, has two World Championship silver medals and one bronze medal to his name. This month, West will compete at the Olympics as part of Great Britain’s eight-man rowing team.

Born in Santa Fe to a British man and an American woman, West had not touched an oar until his freshman year at Yale, when he was persuaded by the coach to join the team. After graduating in 1998, West continued his studies at Cambridge, where he received his doctorate in geochemistry while earning a spot each year to compete against Oxford University. During those years, he raced in the pair competition in the World Cups of Eton, Munich and Lucerne before joining the eight-man boat that went on to place fifth in the 2005 World Championships. In 2004, West competed in the Athens Olympic Games, where his team finished ninth in the men’s eights.

Though his father comes from an observant Jewish household and his mother is not Jewish, West grew up celebrating Jewish holidays and Christmas. While proud of his roots, West said that his identity is much more defined by his rowing than by his religion.

When not training for the Olympics, West holds a teaching and research post at Oxford in the department of earth sciences.

The dynamic duo of Andy Ram and Jonathan Erlich — known as AndiYoni — is sweeping its way to success. The Israeli tennis players have a long history of record-setting moves. Most recently, they won the Men’s Doubles Championship at the 2008 Australian Open, earning Israel’s very first Grand Slam trophy in Men’s Doubles. Ram and Erlich reached the quarterfinals at the 2004 Olympics, and they’ll be back again this year, hoping to do some damage in Beijing.

Dara Torres, the famed 41-year-old swimmer from Parkland, Fla., has made a lifestyle out of setting (and breaking) records. The soon-to-be five-time Olympic contender has won nine medals, including four golds, and seems to get better each year. Having set the American record in the 50-meter freestyle at the tender age of 15, Torres broke her own record last year and is still going strong.

Torres will compete at the Beijing Olympics in the 50-meter freestyle, 400-medley relay and 400-freestyle relay.

This summer, baseball player Adam Stern will represent Canada in the Olympics for the second time. The former Red Sox and Orioles player will play outfield for the team, which won fourth place at the 2004 Olympics in Athens.

While playing for the Red Sox on August 8, 2005, Stern took to the field in the ninth inning with Kevin Youkilis and Gabe Kapler, setting the American League “record” for the most Jewish players on the field simultaneously, according to Canada’s Jewish Tribune. It was the most in Major League Baseball history since four Jews played together in a 1941 New York Giants game.

Ariel “Arik” Ze’evi was a bronze medalist in judo at the 2004 Athens Games. Ze’evi has battled injuries in recent years, but has continued to earn medals at World Championships.

The 31-year-old Israeli is a three-time European champion of men’s judo. In 2001, Ze’evi was awarded the Israel Ministry of Education prize for competitive sport, and in 2003, the daily newspaper Maariv named him the Israeli sportsman of the year.

Jewish Athletes Reach for the Gold