A Gay-Friendly Israel Is Complicated for Jewish LGBT Congregations 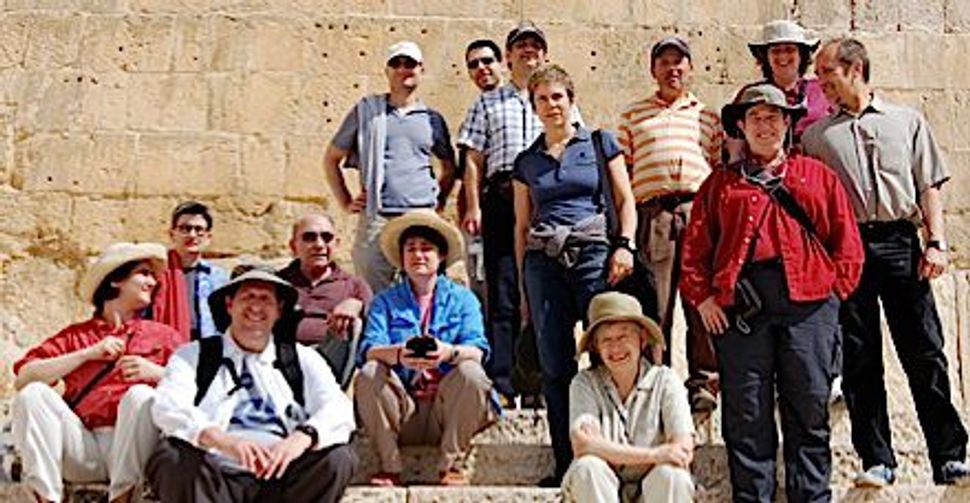 Connecting, With a Difference: Members of Beth Chayim Chadashim, an LGBT congregation in Los Angeles, visit Hulda Gate at Jerusalem?s Temple Mount during a 2007 mission to Israel. Image by Sylvia Sukop

Like many synagogues, Congregation Beit Simchat Torah — New York’s only lesbian, gay, bisexual and transgender synagogue — takes its members on a mission to Israel.

Many other American synagogue missions focus on the Jewish state’s political and security challenges, and spend significant time touring Israel’s holy sites. But the recent two-week trip of CBST instead highlighted the country’s social justice challenges and focused particularly on meeting Israel’s LGBT community. A meeting at Jerusalem Open House, a prominent LGBT organization, was one of the trip’s highlights. Participants also met with Palestinians in the West Bank and spent time with members of Israel’s Ethiopian and Bedouin populations.

CBST’s itinerary reflects the principal difference between how America’s LGBT and mainstream congregations address Israel in their respective programs. While mainstream synagogues aim to encourage solidarity with Israel and to assist in advocating for its policies, most LGBT congregations — if they address Israel at all — focus on its social justice challenges and on forging connections with its gay and lesbian community. They eschew advocacy-based programming.

In recent years, Israeli public diplomacy has been highlighting the benefits and rights that Israeli law affords its LGBT citizens — among them, recognition of same-sex civil unions performed abroad, tax deductions for cohabitating same-sex couples and official embrace since 1993 of gay and lesbian soldiers serving openly in the military. From a legal standpoint, these policies make Israel more liberal on gay and lesbian rights than the United States, and immeasurably more liberal than its Arab neighbors — the latter point being one made by none other than Prime Minister Benjamin Netanyahu in his May 24 speech before Congress.

“Mel Brooks said it best. ‘When you got it, flaunt it!’” Israel’s New York consulate proclaimed over Twitter recently when asked why Israel was talking so much about being gay-friendly, “Branding,” Israel’s New York consul general, Ido Aharoni, told the Forward, “means that it is just as important for Israel to be attractive as it is to be right.”

But if Israeli officials have been hoping for LGBT political solidarity in response, what they are getting is something more complex. Some congregations host open-ended discussions on Israeli society and Israeli policies that include dissenting voices. Others focus their programming narrowly on Israel’s LGBT community. There is a notable absence, generally, of a conventional pro-Israel agenda.

CBST Rabbi Sharon Kleinbaum noted that recent speakers at her congregation have included an activist from Ir Amim, which fights for the rights of Palestinian residents in Jerusalem, and representatives from the Palestinian gay community. The congregation is currently planning a program on the application of the word “apartheid” to Israel that will “include pro-Israel speakers and speakers critical of Israel,” she said.

“CBST has been very committed to examining the issues related to Israel, and I’m not afraid of any of them,” Kleinbaum said. “I’m all for people debating the tough issues of our day. Israel is not a one-issue state.”

Some LGBT congregational leaders said that the conventional communal consensus on Israel is less relevant for their mostly denominationally unaffiliated congregations than it is for mainstream synagogues. And the issue of pluralism, they stressed, is central to their own bedrock identity as gay religious communities.

“As people who are part of a marginalized group, [members] are particularly aware of the special role we can play working toward bigger peace,” said Felicia Park-Rogers, executive director of Beth Chayim Chadashim, Los Angeles’s LGBT synagogue. “People are very aware of civil rights issues because of their own experiences, and that makes them more conscious about civil rights or human rights issues in Israel.”

The Israel programming at Beth Chayim Chadashim has one of two focuses, she said: Israel’s LGBT community, or building peace between Israel and its neighbors. She acknowledged that overall, the synagogue does not prioritize Israel among the myriad programs it offers.

Support for Israel came under debate in the greater LGBT community recently, when New York City’s Lesbian, Gay, Bisexual & Transgender Community Center agreed at the end of May to lease space to Queers Against Israeli Apartheid, an LGBT group strongly critical of Israel. The decision led Michael Lucas, a pro-Israel, gay pornography producer who is a major contributor to the center, to call for a donor boycott of the center. On June 2, citing “divisiveness, protest and heated rhetoric,” the center announced a moratorium on “renting space to groups that organize around the Israeli-Palestinian conflict.”

“The community center should be a place where all different points of view in the gay community have a chance to be heard,” Kleinbaum said. “I’m against censorship. I believe in the power of ideas to be debated openly and vigorously.” This attitude, while typical, does not mean that gay and lesbian groups will not express solidarity with Israel if asked. Like CBST, Beth Chayim Chadashim has led trips to Israel, and Nehirim is co-sponsoring a trip with Keshet, another national Jewish LGBT group. Michael Hopkins, Nehirim’s executive director, said that Israel’s “track record is one of a progressive society, whether it’s service in the military or personal freedoms.”

Other, smaller LGBT Jewish groups — particularly those affiliated with larger synagogues — advertise the synagogues’ Israel programming to their members instead of creating it themselves. The Gay and Lesbian Inclusion Committee of Temple Beth El, in Great Neck, N.Y., occasionally hosts a film about LGBT Israelis and encourages members to attend the synagogue’s Israel events. John Hirsch, chair of GLIC, said that regardless of LGBT issues, Jews “have an obligation to be supportive of Israel, to present to the larger community as good a face as we can in support of Israel.”

Park-Rogers said that the concern for Israel that members of Chayim Chadashim feel, along with their LGBT identity, drive them to seek to improve conditions for Israel’s LGBT community just as they campaign for LGBT rights in the United States. “They feel an added responsibility to work for LGBT rights here. They feel the same responsibility there,” Park-Rogers said. “It’s all wrapped up in the same package. You can’t separate the different parts of your identity.”

A Gay-Friendly Israel Is Complicated for Jewish LGBT Congregations