Modest Styles on the Catwalk 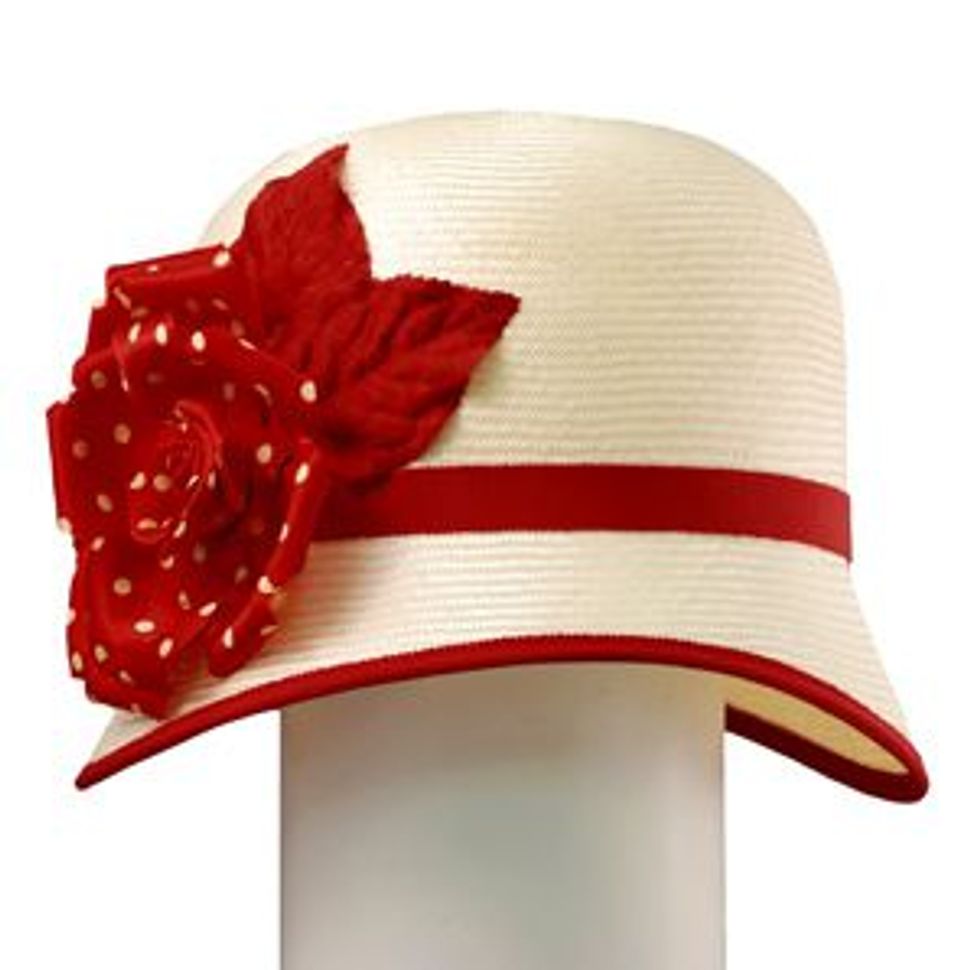 OVER-THE-TOP: A hat offered on FunkyFrum.com.

My friend Margaret, who has been known to wear tiny velvet minidresses, bustiers, fishnets and 14-hole Doc Martens, is a little embarrassed of her current fashion predilections. “I’m getting kind of obsessed with the dresses worn by the FLDS [Fundamentalist Church of Jesus Christ of Latter Day Saints] women and girls,” she told me. “I’m googling like crazy for that long-sleeved, high-necked, sober ankle-grazing look. Would it be rude or disrespectful to wear those dresses just as — gulp — fashion? I don’t want to mock anyone’s beliefs! But I like them!” 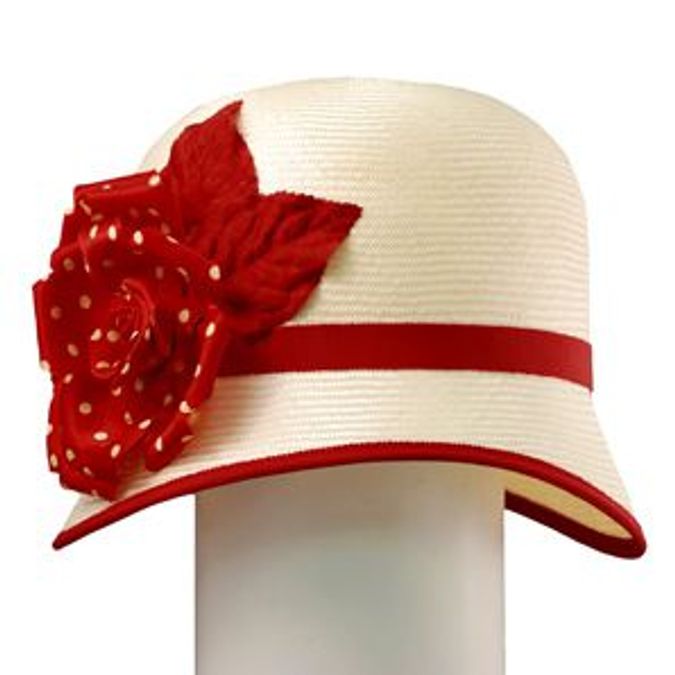 OVER-THE-TOP: A hat offered on FunkyFrum.com.

She’s not alone. A lot of women seem transfixed by images of the women and girls from that compound in Texas, in their full-skirted, leg-o-mutton-sleeved dresses, with their strangely swooped-up-and-sprayed-down braided hair.

Are we hypnotized because the women seem so different from us? Because we see them as sorry victims of their male leaders, or of a clueless overstepping government? Because their inner lives seem so unknowable? Or because we really like the outfits?

Perhaps the dropping hemlines and sober palette are a response to our economic woes; conventional wisdom’s “hemline theory of economics” has always said that skirts get longer in hard times (the ’30s, the ’70s, the grunge-era early ’90s) and shorter in flush times (the ’20s, ’60s, the recent boom years). Maybe designers are simply bored with the babydolls and trapeze dresses they’ve been showing for the last few seasons.

I’m no fashion historian, but something’s in the air. Chloe Sevigny, long a fashion icon among 20- and 30-somethings, plays a sister-wife in an unnamed breakaway Mormon sect in the HBO cult hit “Big Love.” Fashionistas are obsessed with her outfits on the show and jonesing for the series to return from hiatus. (Another friend of mine, Elizabeth, is growing her cropped hair long so she can braid it like Sevigny’s “Big Love” ’do and like the FLDS women’s on the news.)

Of course, a titillating sartorial trend among fickle fashion types is simply real life to a lot of religious folks. Women of different faiths — Evangelical Christian, Orthodox Jewish, Muslim, Mormon — choose to dress in ways that seem strange or repressive to outsiders. A 2007 survey by the Pew Research Center found that 43% of Muslim-American women say they wear the hijab (modest garb, often defined as a head-covering but sometimes also as flowing garments) all or most of the time. There are no reliable numbers for how many Jews dress in a tzniyusdik (modest) manner — and definitions of modesty differ among observant Jews — but most surveys find that the percentage of American Jews who self-identify as Orthodox is growing. And it makes sense that the market for modest clothing would be growing too.

Web sites that sell covered-up clothing are proliferating. Among the dozens that market to religious women: SunnahStyle.com and IslamicOutfitters.com are aimed at Muslims; DressingForHisGlory.com and LiliesoftheField.com target Christians; Tznius.com and ModestClothing.com target Orthodox Jews. Many of the companies are run by women. The FLDS Texas sect’s women members themselves started a factory and an online clothing business (fldsdress.com) at the Yearning for Zion ranch while fighting to regain custody of their children. While they were separated, the mothers didn’t want their kids to wear what they call “gentile” outfits.

Rachel Lubchansky, 30, is the founder and president of Funky Frum (funkyfrum.com), one of the chicest modest clothing sites. A native Midwesterner, she studied at the Fashion Institute of Technology in New York City and worked in the garment biz, dressing like most young, urban career women — in short skirts and cleavage-revealing shirts and the like. But she started feeling spiritual hunger and moved back to St. Louis to be near her family. She spent a lot of time with her grandfather, a Holocaust survivor, from whom she learned “humility and balance.” Then he died, and within a week, Lubchansky met her husband-to-be at her grandfather’s synagogue. “A week after that, I started keeping kosher and keeping Shabbes,” she said. “These choices were about rediscovering my self-respect and re-defining who I was.”

Three years ago, Lubchansky decided to merge her personal and professional lives by starting FunkyFrum.com. She often networks with modest-clothing retailers of different faiths. “We’re all after the same mission,” she said, “promoting the idea that the way you present yourself on the outside reflects the way you see yourself on the inside. While some people come to us from a purely religious perspective, other clients find us because this concept resonates with them. Different sites have different standards — they may sell bathing suits and short sleeves and pants; we sell items that cover the elbows and knees, but there are so many commonalities between us. There’s no competitiveness. We’re mostly women-owned businesses. We share ideas and collaborate.”

Lubchansky attends fashion trade shows — in New York City, Los Angeles, Las Vegas and Chicago — throughout the year. “We cull through hundreds of lines to find a few pieces to add to our collection. We do the work for our customers so they don’t have to dash in and out of boutiques or paw through department store racks looking for something that works for them.” On her blog, “In Our Modest Opinion” (hyuk, hyuk), Lubchansky offers modest makeovers of top designers’ current runway looks.

Although she started her business thinking she’d cater almost exclusively to the Orthodox community, Lubchansky realized within weeks that her customers were hailing from a wide variety of backgrounds. At first she relied on word of mouth to bring in business, but now has a staff of five, a marketing campaign, print ads, an affiliate program, Web advertising on sites like OnlySimchas.com, an e-mail list and a network of observant bloggers to cultivate. She plays her current sales figures close to the (well-tailored) vest, but allows that “our sales have increased an average of 70% yearly over the last three years and we’re still in a growth period.”

For the site’s third anniversary this month, Lubchansky decided to combine fashion with tzedakah. “In the past I’ve strugged with eating disorders,” she said, “so we decided to partner with the National Eating Disorders Association to raise money and awareness.” The site will sell an exclusive Funky Frum necklace by Diane Katzman (a jewelry designer whose work is sold at Saks and Neiman Marcus) and donate a portion of the proceeds to NEDA.

Fashion is often dismissed as frivolous, but as Lubchansky points out, “It’s an expression of identity and a source of art and pleasure.” Whether modest dress is a current trend — one that will be quickly superseded by bondage gear or Gaultier-like Hasidic chic or spaceman outfits — or whether it reveals a longstanding religious and spiritual choice to cover up the body, we should pay attention.

Modest Styles on the Catwalk