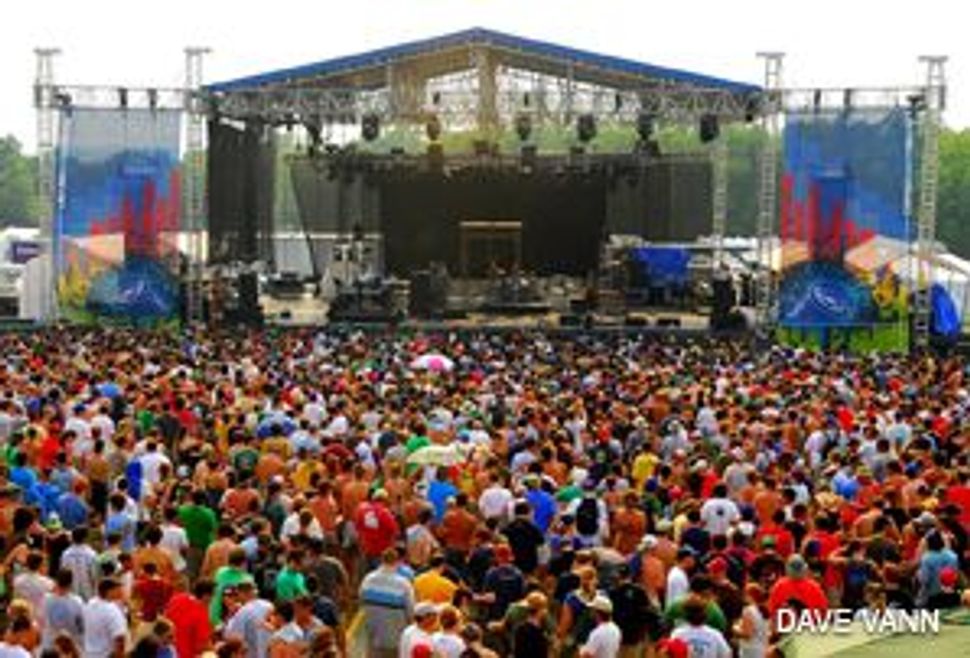 SOUNDS OF SUMMER: A crowd gathers at Camp Bisco, a two-day music-and-camping festival that took place in July in Mariaville, N.Y.

In the searing heat of a recent Saturday afternoon in July, three young men were disassembling a tent, cleaning out their cooler and packing up their car. After two days at Camp Bisco, a music-and-camping festival organized and headlined by the Disco Biscuits (“Bisco,” for short), the trio were hoping to beat the traffic out of the Indian Lookout Country Club in Mariaville, N.Y., about 20 minutes north of Albany. 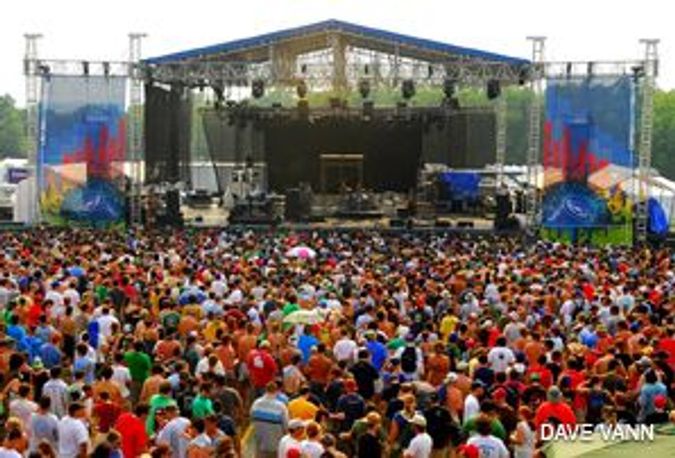 SOUNDS OF SUMMER: A crowd gathers at Camp Bisco, a two-day music-and-camping festival that took place in July in Mariaville, N.Y.

As they slammed the trunk, another young man approached, wearing a white button-down shirt tucked into black slacks.

“Hey, don’t I know you from Brooklyn?” he asked one of them.

“Well, we need yarmulkes, hats, whatever you’ve got, for people to wear at a minyan.”

Another shrug. “Sorry, we’ve got nothing. Good luck, though.”

“Have a good Shabbes,” he said, walking away.

In recent years, summer festivals like Bonnaroo, Wakarusa, All-Good and Camp Bisco have become landmark events for young Jewish men and women. Camp Bisco (campbisco.net) is particularly popular with Jews in the Northeast, since it’s never more than a few hours’ drive away (previous locations include Hunter Mountain), and because the Disco Biscuits are from Philadelphia and perform extensively around New York and New Jersey.

“We don’t do any sort of data recording of what peoples’ religious affiliation is, but there does seem to be a very strong Jewish following to the Disco Biscuits,” said Biscuits keyboardist Aron Magner.

That’s where Magner went to elementary school in Philadelphia — later, he spent a summer at the Alexander Muss Institute for Israel Education. The Institute, about five miles north of Tel Aviv in Hod HaSharon, teaches Israel studies to English-speaking students.

Magner, who is one of two Jewish Biscuits (bassist Marc “Brownie” Brownstein is the other), attended the summer program during high school.

“It was definitely an experience that changed my life — I identify more with my Jewish roots. It’s one of those things that changes the perspective of who you are,” he said.

The original Disco Biscuits — Brownstein, guitarist Jon “Barber” Gutwillig, drummer Sam Altman and keyboardist Ben Hayflick — coalesced at the University of Pennsylvania in the mid-1990s. Magner replaced Hayflick in 1995, and the band spent their incipient days doing what most bands do: switching names, playing college parties and attracting local attention.

After years on the summer festival circuit, the Biscuits opted to create an event of their own. While it may not attract the same level of corporate sponsorship as Bonnaroo and other large-scale gatherings, Camp Bisco did manage to draw Snoop Dogg, who played a headline-length set on this year’s main stage. The rap star fit seamlessly into the festival’s collection of trance groups, jambands and DJs — other performers of note included Shpongle, an ambient electronica artist, and The New Deal, a Canadian house-and-breakbeats trio.

“Since Camp Bisco’s inception, the concept was to make a festival where we hand-picked the bands,” Magner said. “We wanted to put together a festival of bands that we admire and we respect.”