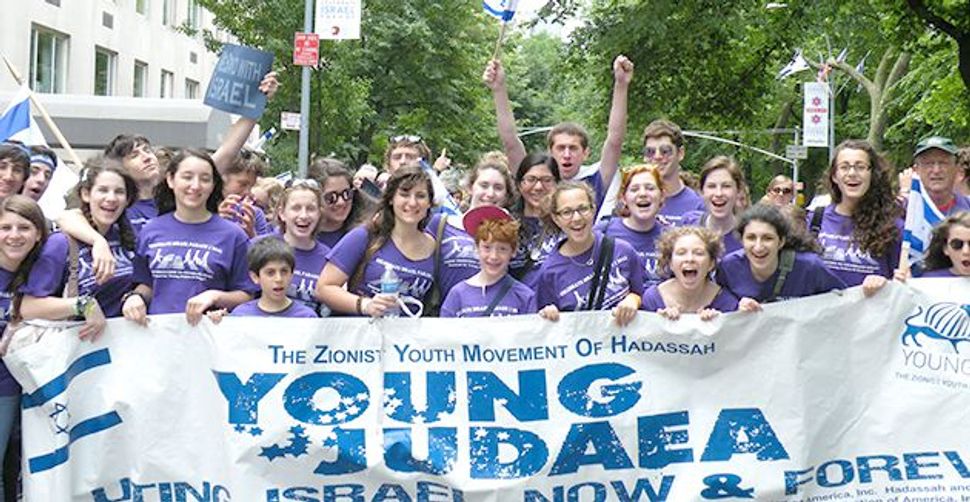 Change: After 44 years under Hadassah, Young Judaea will become an independent organization. Image by COURTESY OF YOUNG JUDAEA

WASHINGTON — Hadassah, the storied women’s Zionist organization, has shut down offices throughout the country and plans to spin off Young Judaea, its affiliated Zionist youth group, in part to offset recent financial setbacks, including a $45 million payment to the federal government related to its unwitting participation in Bernard Madoff’s Ponzi scheme.

Hadassah officials say that the moves stem from not just financial considerations, but also from a broad reform and restructuring drive that predate its Madoff liabilities.

“Of course it hurts, but we planned for it and were prepared,” said Nancy Falchuk, Hadassah’s outgoing national president. She explained that in the two years since the Madoff scandal broke, the group set aside funds so that it would be prepared to face the Madoff settlement. This need for cash, she added, sped up several processes that had already been under way and that were aimed at making Hadassah more efficient.

For the past two years, the group has been engaged in a delicate balancing act, trying, on the one hand, to cope with financial losses in a tough economic environment, and on the other, attempting to grow its membership base and maintain its activity. The results on the ground reflect this mixed goal: large staff layoffs and a scaled-back physical presence, but at the same time, a hike in membership and on-schedule progress in building its largest ever project in Jerusalem’s Hadassah hospital.

As part of a settlement with Madoff’s trustees, Hadassah was obliged to pay back $45 million of the profits it gained on its investments with Madoff, a sum that will go toward compensation to other investors that had lost money in the scam.

The most recent and dramatic of the group’s restructuring moves is the decision by Hadassah to turn Young Judaea into an independent organization. Hadassah has been the youth movement’s sole sponsor for the past 44 years, but the group began discussing Young Judaea’s future more than five years ago, officials said, seeking ways to reinvigorate the 102-year-old movement.

The surprising outcome of those discussions, announced late June, was the emergence of a group of alumni who have come back to form the founding board of a new, independent Young Judaea, which will now fund itself.

“It was like a gift,” Falchuk said of the group of former young leaders agreeing to take over the movement. But it will also relieve cash-strapped Hadassah of the need to fund the program. Hadassah would not provide the dollar amount of the funding that would be saved, but officials of the group made clear that it will continue sponsoring the movement during the transitional period. “We didn’t desert Young Judaea,” Falchuk said, stressing that the decision to send the movement off to independence was “not financial, but mission driven.”

Another money-saving process that has been accelerated because of Hadassah’s cash flow troubles is the restructuring of the group’s U.S. operations, which included closing 16 offices nationwide and consolidating the work of five others. Since 2009, Hadassah has fired 80 workers, one-quarter of the organization’s staff.

But as the group prepares for its 100th anniversary, which comes next year, its leaders are stressing that despite financial hurdles, Hadassah is about more than just cutbacks and downsizing. The group, which retains a sizable endowment, is still on target in building its $300 million hospital tower in Jerusalem, one of the largest philanthropic projects taking place in Israel. It also registered 28,000 new members since January as part of its centennial drive, and hundreds of its members enrolled in the anniversary mission to Israel. “Looking at all this,” Falchuk concluded, “I have the feeling that the glass is half full.”

CORRECTION: In an earlier version of this story, Hadassah is improperly characterized at the top of the story as having terminated its relationship with Young Judaea. As the story noted later, the transition will take place in stages. Also, an earlier version of the headline incorrectly suggested that Hadassah’s cutbacks were wholly attributable to its Madoff investments. In fact, the cutbacks have multiple causes. And a photo caption incorrectly reported the length of the relationship between the two groups. Hadassah had been the sole support of Young Judaea for 44 years, not 102 years.