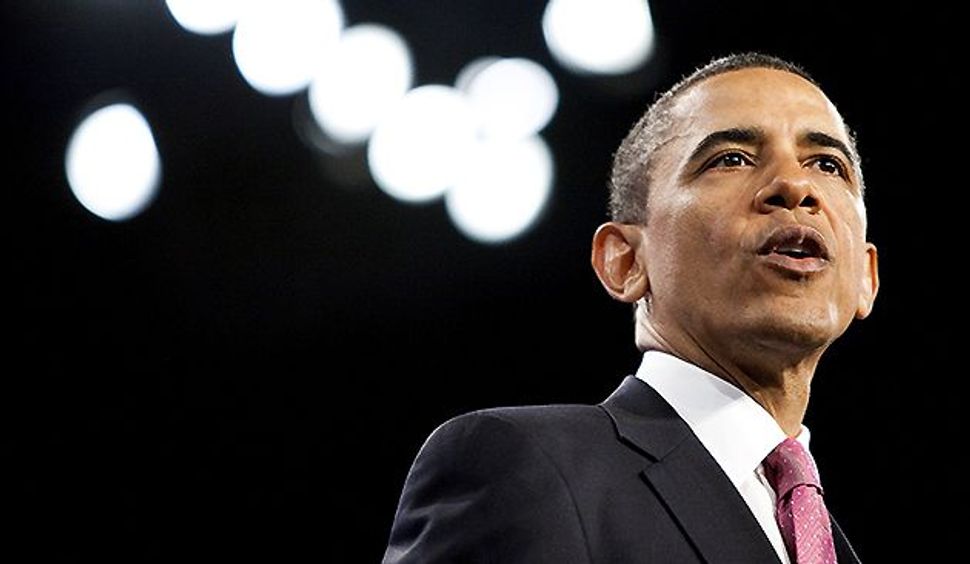 It may be early in the presidential election cycle, but President Obama’s newly established re-election campaign is moving quickly to address Jewish concerns following the president’s clash in May with Israeli leader Benjamin Netanyahu.

So far, despite the fireworks between the two leaders, the Democrats are pleased with the results of their approach. Based on their own internal polling and on lessons from the 2010 midterm elections, Democrats believe that the issue of Israel will not play out significantly with Jewish voters. And pointing to a glitzy pro-Israel Washington donor event with Obama held on June 20 that raised more than $1.5 million, supporters of the president believe that the important constituency of Jewish donors is safe.

Susan Turnbull, former vice chair of the Democratic National Committee, said, “I’ve worked in many campaigns, and it is always the same.” Despite repeated claims that Democratic candidates are weak on Israel, she said, the Jewish community continues to support them both in votes and in money. “I’m sure this is what we will see again in 2012,” said Turnbull, who is now chair of Jewish Women International.

Democrats admit that the Middle East issue has caused some disquiet among Jewish funders, but they see it as no more than a snag in the road that has now been addressed. Moving forward, the Obama campaign will shift back to issues that have traditionally rallied Jewish donors: economic policies, health care and education.

The picture was far less rosy back in May. A “listening tour” conducted by White House advisers among key Jewish donors found real concern over Obama’s relations with Israel. White House senior adviser Valerie Jarrett, campaign manager Jim Messina and Obama’s 2008 finance chair, Penny Pritzker, heard Jewish donors complain that they did not understand the president’s policy toward Israel or his plans for advancing the stalled Middle East peace process. Among these donors was Miami real estate developer Michael Adler, a key Obama “bundler” who helped raise significant sums from Southern Florida Obama supporters in 2008. “Good friends tell you how you can improve,” Adler said in a Wall Street Journal article published May 19.

Officials with Obama’s 2012 re-election campaign, which just began operating officially with the May opening of its offices in downtown Chicago, view Jewish donors as one among several constituencies that will require some special attention in the upcoming months. (Wall Street financiers and members of the gay and lesbian community are the others.)

David Harris, president and CEO of the National Jewish Democratic Council, acknowledged that “due to an organized effort by those on the right to exploit any misunderstanding on the Israel issue for partisan gain,” Obama’s relations with Israel had become a campaign issue. “Certainly more questions have been raised this time around,” he said.

“There was a need to address the Israel issue,” added a Democratic operative, who asked not to be identified.

For Obama, this meant both talking to the larger Jewish community, as he did in his May 22 speech at the annual meeting of the American Israel Public Affairs Committee, and speaking directly to Jewish pro-Israel donors.

One such donor event took place at Adler’s Miami home. Democrats in the campaign pointed to this as a sign that even those who had concerns are back on board.

The main event, however, was the June 20 Washington fundraiser. Billed as an evening of “Americans in support of a strong U.S.-Israel relationship,” the dinner with Obama cost attendees from $25,000 per couple to the maximum allowed contribution of $35,800 per person. Organizers say registration exceeded plans by more than 50%, as did the net donation income from the evening, which ended up reaching $1.5 million.

Obama spoke at length from the podium, focusing heavily on the issue of Israel. He promised his steadfast support for the state, while acknowledging the possibility of “tactical disagreements” with the Netanyahu government. After the speech, the president stayed for a closed-door session in which he answered questions about his policy on Israel for another hour.

Afterward, Democrats made sure to circulate Obama’s speech to the press and to Jewish activists. A Democratic source said that this fundraiser was twice as long as any of the other donor events the president has held in the past several months.

Obama’s backers believe that paying this kind of attention to donors, coupled with his address at the AIPAC conference, has calmed potential donor anxiety over issues relating to Israel. From here, they hope to move on to a business-as-usual mode with Jewish campaign funders. “It is a pivot strategy,” a Democratic activist said. “You answer any questions that come up about Israel, and then pivot to take on any other issue under the sun that donors can come up with.”

But Republican Jewish fundraiser Fred Zeidman argued that Democrats are not in the clear yet. While acknowledging that there aren’t “tremendous amounts of money coming our way yet,” Zeidman, a Houston businessman who is close to former president George W. Bush, said he does believe that Democrats are having a harder time energizing Jewish donors and fundraisers. The effort put into the June 20 event with Obama shows that “there is more concern on their side than in previous elections,” he said.

Jewish donors make up, according to estimates, more than half of the list of large contributors to Democratic candidates. It is this disproportionate role they play that makes them a key target for any political candidate on the Democratic side. “They are very significant,” Turnbull said. She added that throughout her work with the DNC, she did not see any shift of Jewish contributions to the Republican side, and said that donors to Republican candidates are committed Republicans and not disgruntled Democrats.

Although Jewish donors and Jewish voters are seen as important constituencies, the Obama campaign has yet to announce a point person for the community. Currently, relations with donors are maintained by Sarah Bard, a DNC official with fundraising experience, and on the White House level by several key staffers — Jarrett, Danielle Borrin from the office of public engagement and, increasingly, chief of staff William Daley.

Zeidman noted that Jewish supporters of the Republican Party are still waiting to see who their presidential candidate will be before putting their dollars forward. He added that almost all major Jewish fundraisers on the Republican side, himself included, are raising money for only one candidate — Mitt Romney.