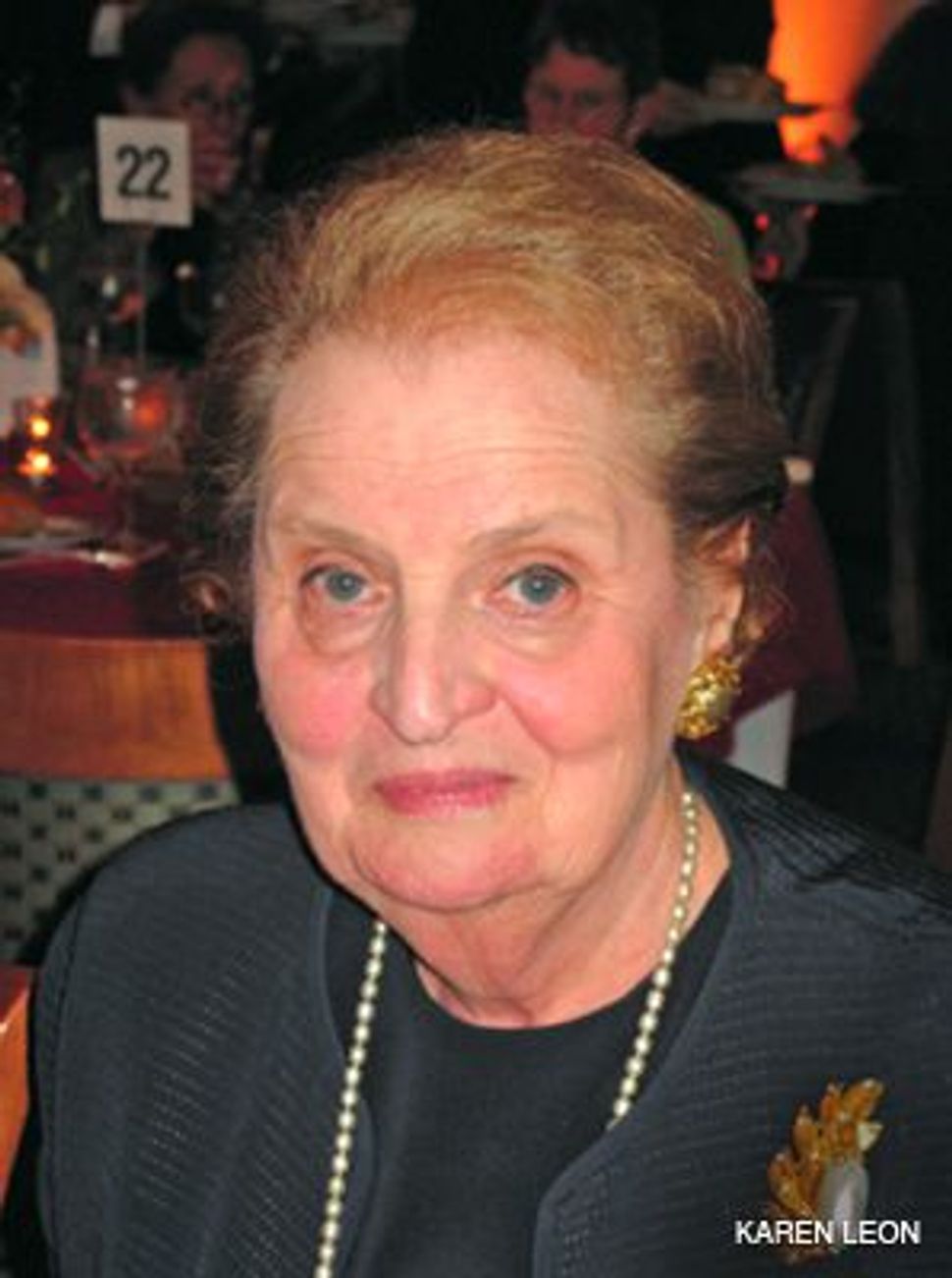 HATS OFF: Madeleine Albright was honored at the event. 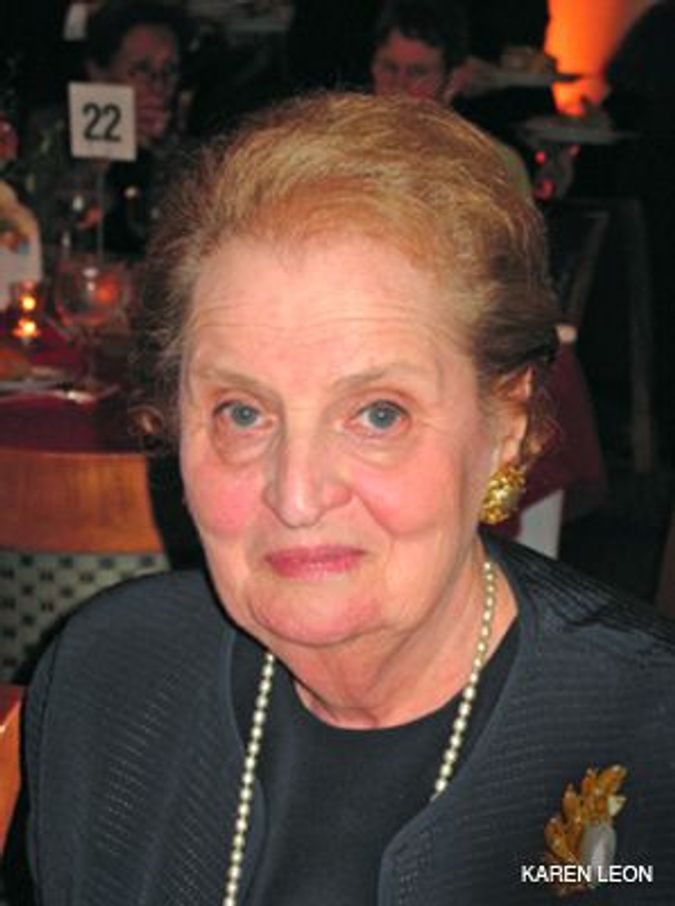 HATS OFF: Madeleine Albright was honored at the event.

The July 17 “Israel at 60 Concert of Remembrance & Celebration,” held at Usdan Center for the Creative and Performing Arts, provides reassurance that the children who perished in the Holocaust will be remembered in a positive context by younger generations. The program included excerpts from the children’s opera “Brundibar,” performed by 150 Usdan children ages 8 to 12. First performed in the Therienstadt concentration camp by children who were later shipped to the gas ovens of Auschwitz, “Brundibar” has continually played in Israel since World War II. Caroline Stoessinger, an authority on Holocaust music, explained that “Brundibar,” written by Czechoslovakian Jewish composer Hans Krasa, “was the name of a monster. It was a code name for Hitler. The Nazis never figured out it was about them.”

Eight high-school students performed a scene adapted for the stage from “The Diary of Anne Frank.” Among the 1,000 attending the sold-out event at Usdan’s on-site McKinley Amphitheatre were 30 top executives from UJA-Federation of New York, including John Ruskay.

Stoessinger, a noted concert pianist, informed that “Hatikvah,” Israel’s national anthem performed by Usdan’s junior chorus and junior orchestra, “was based on a Czech folk song” and is very similar to the famous “Moldau” by Bedrich Smetana, inspired by a Czech folk song. Usdan Center for the Creative Art and Performing Arts (a UJA agency) is America’s premier summer arts day camp. Each year, 1,600 students, ages 6 to 18, come to its 250-acre spread in Long Island to enjoy a curriculum that includes music, writing, art, chess, dance and theater arts, and programs in nature, ecology and design. Usdan’s motto: “where you can lose yourself for a summer and find yourself for a lifetime.”

“I was raised a Roman Catholic, became an Episcopalian and, 11 years ago, discovered I was Jewish,” said Madeleine Albright, an honoree at the Tanenbaum Center for Interreligious Understanding awards gala, held June 4 at United Nations Headquarters. “So if you ever hear me talking to myself, I am involved in an inter-religious dialogue.” America’s first woman secretary of state from 1997 through 2001 noted: “Diplomats of my generation were taught to keep religion out of the foreign policy discussions. We were trained to believe that affairs of state were determined solely by national interest…. This… mindset was often appropriate, but not always, and the exceptions were costly…. Faith has much to do with how we distinguish right from wrong, how we view history… what we are willing to sacrifice for — and to kill for.” She cited Rabbi Abraham Heschel: “The purpose of inter-religious cooperation is ‘neither to flatter nor refute one another [but] to purify minds from contempt, suspicion and hatred.’” Also honored were John Whitehead, who’s America’s former deputy secretary of state, and Ann Curry, co-anchor of “Dateline NBC” and an anchor on the “Today” show.

Albright, a principal in the global strategy firm The Albright Group LLC, is famous for the brooches she wears at social and diplomatic events. In 2004, when Albright was honored at the Gem Awards Gala at Cipriani 42nd Street, Deborah Norville, who served as the evening’s mistress of ceremonies, noted that Albright had a tendency of telegraphing her negotiating stance by means of her lapel jewelry — be it “a dove pin, a gift from Leah Rabin” or a “military pin combining the emblems of all the U.S. services.” Norville joshed: “When she wears an eagle with claws, it’s, ‘We mean business.’ Called ‘a snake’ by the Iraqi government, she subsequently sported a snake pin at the United Nations debate on Iraq.” Albright told the Gem Awards guests: “When devious, I wear a spider; when ready to sting, a bee.” At the Tanenbaum Awards ceremony I mentioned to Albright, who was wearing an American eagle brooch, that I was aware of the silent messages her pins telegraph. She turned to me and, with a conspiratorial smile, said: “Just wait for my book. I explain all my pins.” Forgot to ask the name of the publisher, but no doubt the book will be prominently displayed in the window of Cartier’s, which has designed several of her brooches.

Georgette Bennett, founder and president of the Tanenbaum Center for Interreligious Understanding, noted, “When my husband, Rabbi Marc Tanenbaum, died 16 years ago, he left me with a great legacy and a profound vision — one of activism.” In her journal message, Bennett noted: “Today, Tanenbaum is an internationally recognized non-sectarian and secular force for addressing the power of religion as a stimulus for conflict as well as a resource for resolving it…. In each area of our work, Tanenbaum… finds solutions to one of the most intractable issues of our time — religious intolerance, hatred and violence.”

“The honor you bestow on me tonight belongs to the Warsaw Ghetto fighters and to all others who fought the Nazis,” said Richard Sonnenfeldt, honoree at the May 13 American Friends of the Ghetto Fighters’ Museum Gala, held at the Pierre. Born in Germany, Sonnenfeldt was 20, a newly minted American citizen who fought in the Battle of the Bulge, when he became chief interpreter for Justice Robert Jackson’s legal team at the 1945 Nuremberg Trial of major Nazi war criminals. Among those whom he interrogated were Herman Goering and Rudolf Hoess, commander of Auschwitz. Sonnenfeldt recalled: “I found a report, ‘The Warsaw Ghetto is no more,’ by SS General Stroop, who described in gruesome detail how killers liquidated over 13,000 Jews and sent 52,000 to Treblinka to be exterminated.” “Justice came too late for the victims, but not the perpetrators,” said Sonnenfeldt, a renowned scientist and inventor (35 patents). He is a principal developer of color TV and computer technology for the NASA Moon shots. “Now we need to teach our children and grandchildren about the Holocaust and make sure that they learn the dangers of prejudice, racism and antisemitism…. [They] must learn the value of freedom and tolerance.”

Honorary dinner chair Vladka Meed, who was a courier between the Polish underground and the Warsaw Ghetto fighters, smuggling weapons into the ghetto, said: “Will history do justice to our Jewish world that is no more? Will myths or denials prevail? Will the young only learn historical facts, frightening numbers of dead, or will they be able to see beyond the statistics, to see the victims as people, as individuals? Will they be able to see in the ghetto children their own peers?”

“What is the difference between an academic lecture and a military order? One is long, and the others short,” stated guest speaker Benjamin Gantz, Israel Defense and Armed Forces attaché to the United States and Canada. “After hearing the stories of Mrs. Meed and the amazing stories of Mr. Sonnenfeldt, why bring an active military general to this event?” Gantz said. He touted the Ghetto Fighters’ Museum as an educational center that “not only explains the past… [but] the moral justice of Israel’s existence as a national home of the Jewish communities forever…. Whether we were a second generation or not, on 9/11 the Third World War had started.” He cited a multitude of challenges facing Israel’s future, and at the top was “Ahmadinejad,… the modern Hitler.”

The dinner, which honors educators of Holocaust studies, presented its annual Janusz Korczak Teaching Award to Wendy Lindner of Freeport High School in Freeport, N.Y. “Teaching the Holocaust studies has been both my professional and spiritual mission for the past 16 years,” said Lindner, who has participated in the International Book Sharing Project at her school, and who received a fellowship to travel to Poland and Israel as part of Bladka Meed’s Holocaust and Jewish Resistance Summer Fellowship Program. “It is said that for each of us there is a place we can call home… other than where we presently live,” Lindner said. “At the Ghetto Fighters’ Museum in Israel, on a poster board, I found names of schools connecting Israeli and American students in a program called the ‘The International Book Sharing Project.’ At that moment, I knew it was my spiritual destiny to take this project with me.” Deja Grant, one of Lindner’s students, expressed thanks for Lindner’s commitment. “My peers… from the other schools [the Israeli high school Amal Zair, and Aquinas High School ins Rochester, N.Y.] taught me new ways to look at situations,” Grant said. “For example, looking at Elie [Wiesel’s] decisions from a Jewish perspective instead of a Christian perspective.” Janusz Korczak was an internationally renowned educator, pediatrician and writer who founded children’s orphanages. He managed to save, feed and care for nearly 100 orphans in the Warsaw Ghetto until August 5, 1942, when, as Meed described the scene: “Korczak and his orphans were led on their last march to the Umschlagplatz to be deported to Treblinka. The Germans offered to let Korczak go, but he insisted on staying with his children and rode with them to Treblinka. Among the 17,000 memorial stones at Treblinka inscribed with cities, towns and villages, there is a single stone with the name of a solitary individual — Janusz Korczak.”