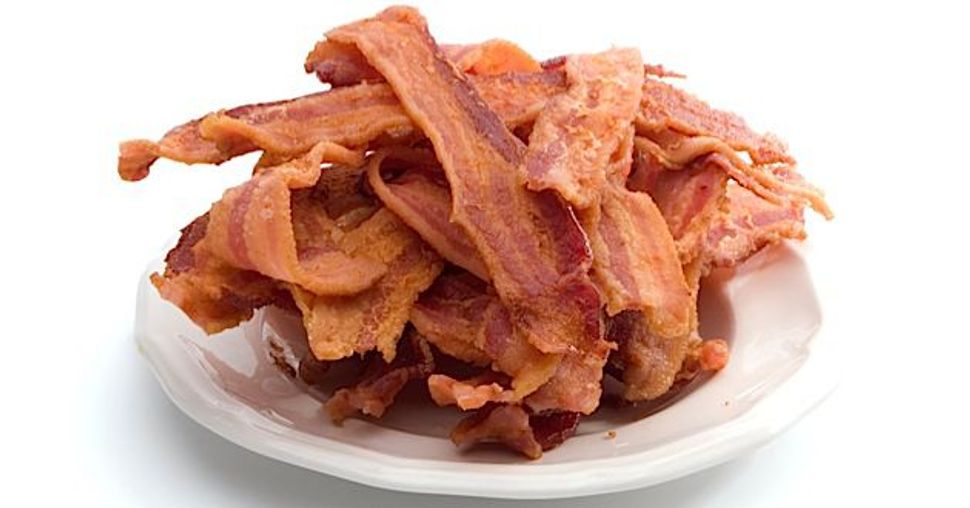 Forbidden Meat: From fruit salad to sundaes, bacon can be found on just about everything these days. Some Jews are finding it hard to resist the food as its popularity grows. Image by istock photo

This is a tough moment to be a Jew. Not because of the sex scandals involving members of our tribe. Not because of calls for Israel’s withdrawal from this or that strip of land. (What else is new?) Not because of anti-Semitism here or abroad. No, it’s because we are living through an unprecedented Bacon Boom.

As you may have noticed, bacon has become the Snooki of snacks — a glistening, guilty pleasure that’s become ubiquitous. It’s on sundaes. In fruit salad. Baked into brownies. You can find the hipster ham in pretty much every food that has ever existed, with the possible exception of hamantaschen. And that’s not to mention the novelties! There’s bacon-flavored lip balm and bacon-flavored toothpicks and even bacon-scented floss, for folks trying to get that flavor stuck between their teeth. As you may have read right here, there have recently been sightings of burlesque beauties twirling real bacon tassels. And then there’s us Jews, looking on.

Jews and bacon go together like Samson and Delilah: We know we’re supposed to resist, but the flesh is weak. Heck, even the cartilage is kaput. Once the nose sniffs that sizzling scent of sin, all bets are off.

“Even now, I have to force myself not to order bacon, because I love the smell,” Manhattan media consultant Lonnie Soury admitted. Soury tries to avoid it more for health reasons than for religious ones, but even so, he is not unaware of bacon’s inherent symbolism. “It’s like, oh boy — touch that bacon, you’ll eat anything! It’s the gateway drug to total assimilation.” “It’s the forbidden fruit,” said Seth Leavitt, president of Abeles & Heymann, a Hillside, N.J., kosher company that sells, among other delights, kosher bacon. Actually, the official term is “beef fry,” kosher bacon being an oxymoron along the lines of “jolly splinter.” Or “uncomplicated Jewish identity.” Beef fry is kosher beef treated to taste as treyf as possible — not that the life-long kosher-keepers would know. (To counter the inevitable curiosity, the company’s slogan is, “We taste better.”)

As a gal who used to dabble in BLTs but has since returned to the fold, all I can say is, thank God for a tasty alternative to Oscar Mayer. Because the pull of cured pork can be almost overwhelming.

How come? “I think it’s one of the most compelling flavors in the world, when done right,” said Al Marcus, a Houston Jew whose company, The Grateful Bread & Other Good Things, ships his homemade gourmet bacon across the country (but began by making ONLY challah). “I’ve become convinced that there is something in the human genetic makeup that favors food flavored with smoke. Maybe it’s a vestige of our cave-dweller ancestors.”

Or maybe it’s a vestige of our smoked fish eating uncles. Whatever, Marcus claims that his rabbi gave him his implicit blessing by noting that “many people in the community have done very well by bacon” — meaning that other local Jews who engaged in pork production were philanthropic with their profits.

But sometimes, the help that bacon can provide the Jews is even more direct. “During the depression,” Dallas dietitian Jessica Setnick said, “my Aunt Frances was diagnosed with rickets, and the doctor said she had to drink milk. She did not want to drink milk. His suggestion was for her mother to cook bacon and let her smell it cooking and tell her she could have it — if she drank her milk. So my Grandma Dora, who kept a kosher house, asked a neighbor to cook bacon with the window open for little Frances to be tempted by the aroma.”

And it worked! Frances drank her milk, cured her rickets and got to eat bacon as her reward.

Other times, God — or fate — is not as forgiving. Thirty-something Barbara Sanchez recalls, regarding the eating of bacon: “Oy! We were not permitted, ever.” But did that stop her? “Suffice to say, when our folks went on vacation for their 25th anniversary and my sister came home from college with her roommate (I was 14 years old), we tempted fate and bought bacon. Loved it! Bought a ham, too, and every time someone came in the door that week, we said, ‘Eat ham!’”

Then one day, they went to the Bronx to visit their aunt and uncle “and, to make a long story short, the car was stolen,” Sanchez said. “Did we take my sister’s crappy car? Noooo. We took my mom’s very nice Dodge Coronet that was probably turned into a cab. Needless to say, things didn’t go very well with the folks on their return. To this day, my sister and I swear the car was stolen because of bacon!”

Maybe she’s right. Maybe the laws of kashrut are hard and fast, and bacon exists for the same reason as Eve’s serpent. Clearly, the tension between pork and piousness has yet to be resolved, as Rocco Loosbrock can attest. Loosbrock is the owner of the upscale bacon purveyor Bacon Freak, in Ventura County, Calif. While he is not Jewish, he noticed something right away when he started shipping bacon gift baskets four years ago. “We read the gift messages that we get, and a whole lot of them end with one word. Can you guess what it is?” Loosbrock asked.

Nope, Loosbrock says: “Mazel tov!” (Actually that’s two words, but how would a guy named Rocco know?) Someone somewhere is laughing. Who gets the last laugh, we do not know.