Settlers Appear To Be Ramping Up Violence in West Bank 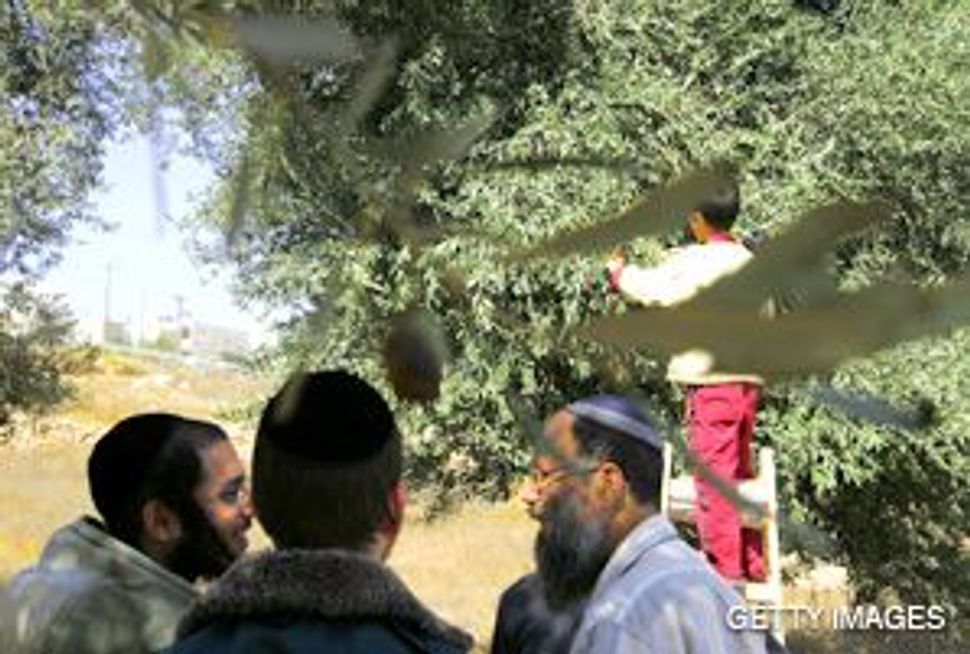 STANDING BY: In a more peaceful moment, Jewish settlers in the

Tel Aviv — Incidents of Israeli settler violence against Palestinians in the West Bank have surged in recent weeks, according to several new reports, prompting unusually sharp complaints from senior Israeli army field commanders as well as from villagers and human-rights groups. 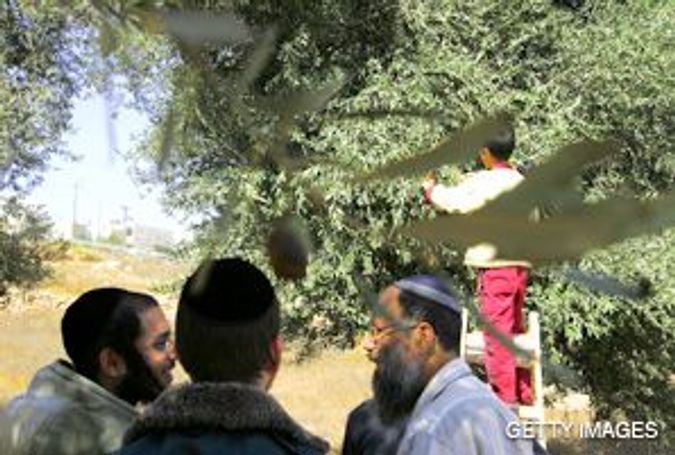 STANDING BY: In a more peaceful moment, Jewish settlers in the

Settler leaders told the Forward that the incidents are part of a new campaign intended to disrupt evacuations of illegal settlement outposts, which have accelerated recently as part of Prime Minister Ehud Olmert’s peace effort.

Reported incidents include rock-throwing, gunfire, physical assaults, stolen livestock, property damage and burning of fields, according to a statement by B’Tselem, an Israeli human-rights organization. Most of the incidents have occurred near a group of settlements outside Nablus in the northern West Bank, and in another cluster south of Hebron, B’Tselem said. The organization is currently investigating 12 reported incidents occurring between July 29 and August 4.

In a sign of the military’s alarm, the outgoing commander of the army’s Samaria Brigade in the northern West Bank, Amir Baram, met with senior brass and with state prosecutors in late June and urged authorities to try to “deal with provocateurs” among settlement leaders, according to a report in the daily Haaretz. Baram reportedly named specific figures, including one of the settlement movement’s most prominent leaders, Daniella Weiss, who is the former mayor of Kedumim, a settlement southwest of Nablus.

Other news reports quote unnamed officers charging that the violence is part of a deliberate campaign by settlement leaders to disrupt army efforts at dismantling illegal outposts. Officers reportedly complained that the police, courts and political leadership were failing to respond seriously to the violence.

Weiss confirmed to the Forward that settler organizations have prepared a deliberate campaign to disrupt evacuations by pinning down troops in scattered locations. “It keeps them busy,” Weiss said, referring to the troops. “How many times will they mobilize thousands of soldiers to overcome this local agitation?”

Israeli human rights organizations say it is difficult to quantify an increase in violence with any precision, since most incidents go unreported by Palestinians who say they expect little response from Israeli authorities. But statistics from the United Nations coordinator of humanitarian affairs show that reported incidents increased 46% from June to July.

Some of the most publicized recent incidents appear unrelated to the new settler campaign. In an East Jerusalem neighborhood that Israel considers part of Israel proper, a mob of Haredi Jews attacked two Arab passers-by July 22 and stabbed a Jew who tried to shelter the victims. In Hebron, where settler violence against Palestinians is said to be commonplace, an individual tried to attack a carload of British diplomats August 7. Spokesmen for the Hebron Jewish community say that any violence by settlers is in self-defense against Palestinian assaults.

By contrast, the new anti-evacuation campaign, called either Mutual Responsibility or Price Tag, was initiated by several organizations on the right wing of the settler movement and has been publicized through notices posted on settlement boards and in local newspapers. The groups include Youth for the Land of Israel, which claims to have 10,000 members, as well as the Samaria Settlers’ Committee and the Binyamin Settlers’ Committee. The campaign is not endorsed by the largest settler organization, the Council of Jewish Communities in Judea and Samaria.

Until recently, when security forces arrived to evacuate an illegal outpost, settlers from across the West Bank gathered to try to hinder the operation; however, many arrived too late to participate. Now, activist committees are calling for all settlers, including those who cannot make it to an evacuation in time, to help wreak havoc throughout the West Bank. Recommended methods include arson and road-blocking to force troops to abandon the evacuation and deal with the protesters’ actions.

Hebrew University political scientist Mordechai Nisan, an expert on the settler movement, said that “this is action based on what are seen as the lessons of the failure to ‘save’ Gush Katif, which are giving rise to a more militant activist approach.”

The new plan means that settlers now aim to turn every evacuation into “a day of chaos” so that security forces “can’t come, do the evacuation and then go,” Itai Zer, a founder of the 20-family Havat Gilad outpost near Kedumim, told the Forward. The outpost is named for Zer’s brother Gilad, who was killed in a Palestinian terrorist incident. “The first instruction is to come to the outpost as quickly as people can,” Weiss said. But if they look unlikely to arrive in time, “people should block the traffic and prevent any kind of transportation along the road” wherever they are. Burning tires is a favored method, she said. Others include holding mass marches in forbidden areas and setting fields aflame.

The tactic is a response to the speeding up of evacuations by security forces. “The methodology of security forces is a quick arrival at an outpost and a quick destruction before protestors arrive,” said an advertisement placed by the Samaria and Binyamin committees in the Kedumim community newsletter when the strategy was launched in June. “It is time to change the way we approach the struggle.”

This strategy has been used three times as of yet, twice in June and once in July, though so far the disruptions have been close to the evacuation sites. The real test is expected to come if the government pushes ahead with plans to end the long-running saga of Migron near Jerusalem and, after concluding current negotiations with the Council of Jewish Communities in Judea and Samaria, removes the outpost, which occupies private Palestinian-owned land.

While Weiss insists that the new settlers’ strategy does not harm Palestinians or their property and that only empty fields are burned, Palestinians and human rights groups claim otherwise.

Citing testimonies from Palestinians, the volunteer human rights group Yesh Din claims that on July 24, during the evacuation of a bus from the Adi-Ad outpost south of Nablus, near Yitzhar — considered a stronghold of Kahanists and Chabad messianists — settlers attacked farmers in the nearby village of Burin, damaging property and torching crops. Elsewhere during the two-day Adi-Ad protests, the army reported two incidents: one in which a settler seized a soldier’s weapon and fired it in the air, and another in which a settler held a knife to a soldier’s throat. Yitzhar leaders denied both incidents and threatened to sue the army for libel.

This followed an earlier incident close by on June 19, when tires and fields burned near the outpost Havat Shaked after security forces arrived to remove a mobile home. Settlers prevented them from doing so — injuring five police officers in the process — and in the end the trailer was bulldozed. According to Yesh Din, settlers also threw stones at villagers in Burin and set fire to Palestinian-owned wheat fields, burning 75 acres.

A week after this incident, the Samaria Settlers’ Committee placed in the Kedumim paper an advertisement that made reference to the “many fires,” declaring: “This is an example of how the boundaries of the struggle are being determined by the settlers.”

Zer admitted it was “possible” that fields with crops are burned as part of the tactic.

Police spokesman Micky Rosenfeld declined to comment on the new settler strategy, and said in a brief statement to the Forward: “Police will continue to examine and carry out the security issues in Judea and Samaria as takes place in the other five districts around the country.”

Sarit Michaeli, spokeswoman for B’Tselem — which recently distributed 100 cameras for Palestinians to record incidents in a bid to crack down on settler violence — noted the “irony” that “Israel is adhering to the peace process by evacuating settlements, but the dismantling of one caravan is causing huge damage to Palestinians.”

Settlers Appear To Be Ramping Up Violence in West Bank