Georgia on Their Mind: Expats Forced To Juggle Dueling Identities 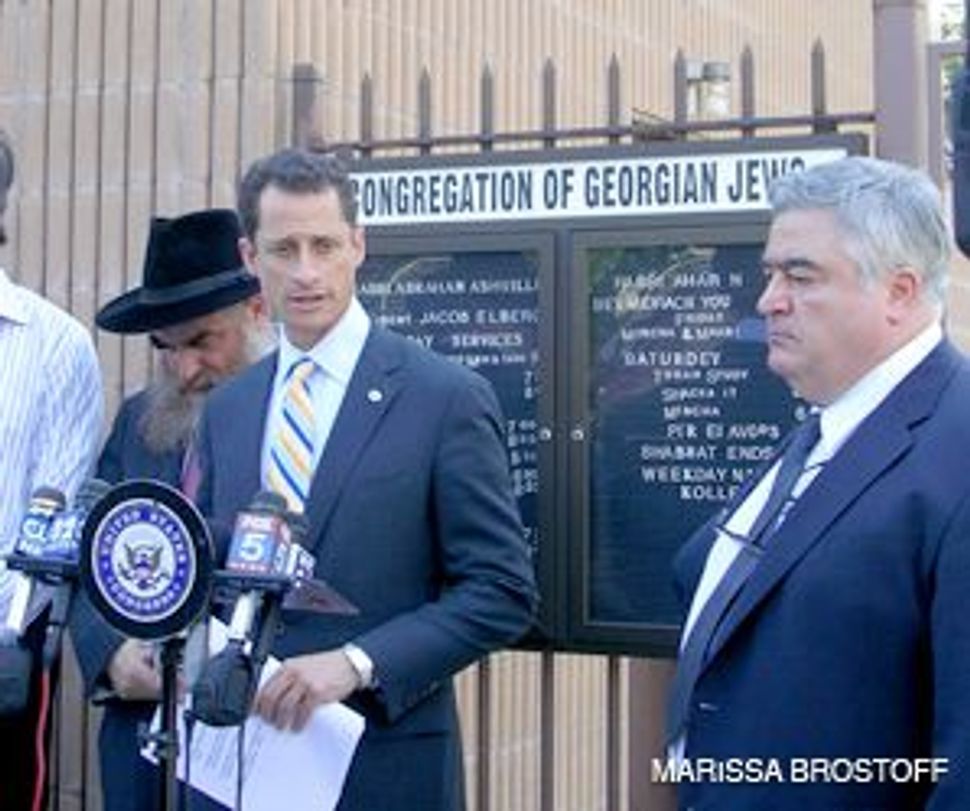 When U.S. Rep. Anthony Weiner organized an emergency meeting for the Georgian community in New York, he didn’t hold it at a community center, church or school auditorium, but at an ornate synagogue on a residential block in Queens. 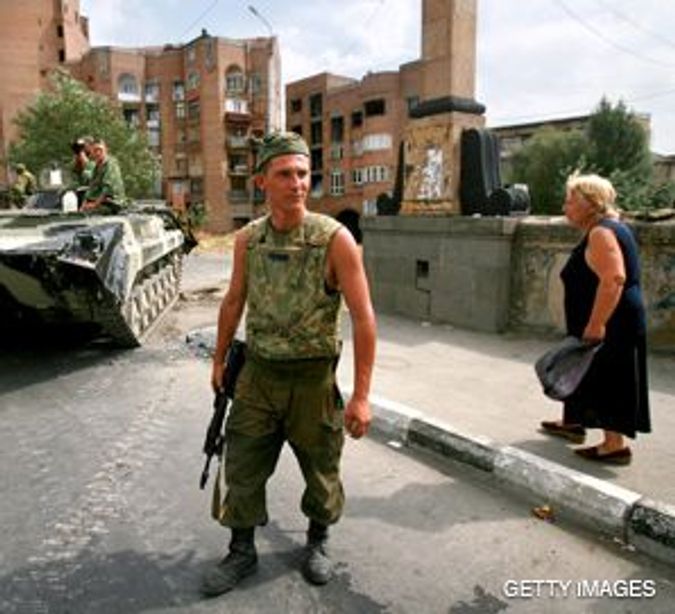 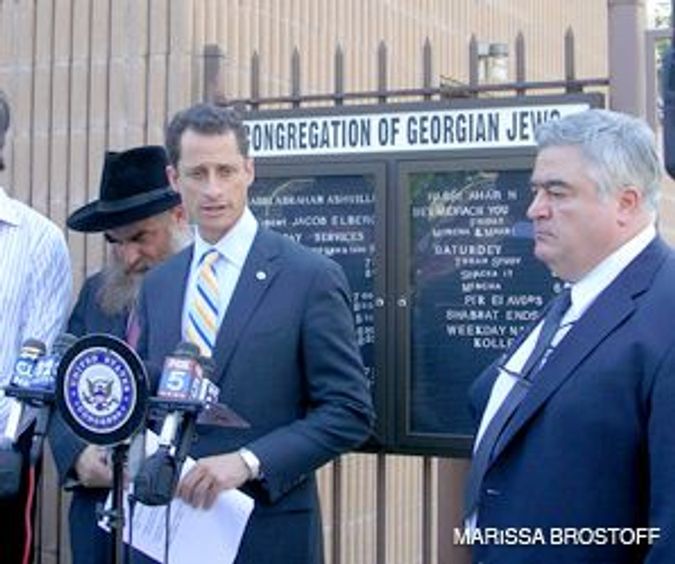 Of the 5,000 or so Georgians who live in the New York area, at least 3,000 are Jewish, and the Congregation of Georgian Jews may be the most permanent community structure that the Georgian émigré population here has. Indeed, the synagogue’s shiny black doorway has been opened to the entire Georgian community on many happier occasions before the grim meeting with Weiner on August 13, while Russian tanks rumbled through the streets of major Georgian cities.

The congregation’s willingness to act as a de facto Georgian cultural center underscores the comfort that many Georgian Jews feel with their national identity. Though accustomed to being a tiny minority — in Georgia, a country of four and a half million, Jews now number around 10,000 — the position of centrality suits them well. To a degree perhaps unusual among Jews who came to the United States and Israel from the former Soviet Union, they speak of their country of origin as a homeland.

“Georgia is like Israel,” said Mikhail Roketlishvili, who was a professor of economics in Georgia before coming to the United States and still has family in the old country. “She was attacked many times by different countries and she always stays alive.”

Despite that conviction, Roketlishvili said that he is deeply worried about Georgia.

Other community members echoed his concerns at the meeting with Weiner, who represents a chunk of Queens where many Georgian Jews live, and among themselves during a lively and sometimes heated discussion over bagels, instant Israeli coffee and vodka at the synagogue the morning before the meeting.

On the most pressing level, they worried about loved ones still in Georgia, some of them unreachable since Russia invaded Georgia over the breakaway region of South Ossetia last week. But the fear of Russian dominance over the region, as well as concerns about Georgia’s relationship with Israel, an important ally, also loomed large.

“War is complicated, you cannot say one side is right,” said Otar Sepiashvili, a film critic and television personality in Tbilisi before he moved to New York in 1996. “But Georgia is an independent country, and South Ossetia is part of the Georgian republic.”

On occasion, their concern for their families and their nation seemed to come into conflict. “At first I thought, maybe Israel should send their aircrafts to bring the Jews for free,” said Abraham Ashville, a rabbi at the Congregation of Georgian Jews. “But then I thought that would not be nice to our Georgian brothers.”

The Georgian Jewish community in New York is extremely tight-knit, with most of its population living within a few blocks in Forest Hills, a neighborhood in Queens. The breakfast at the synagogue, in fact, was a daily occurrence that follows the morning prayer services, Ashville said. Jews in Georgia under the Soviet regime experienced greater religious freedom than their co-religionists in Russia, and Georgian Jews in the United States remain more observant, by and large, than their Russian equivalents.

According to legend, Georgian Jewish roots in the Central Asian country stretch back as far as the Babylonian captivity in the 6th century BCE. Asked his opinion of Georgian president Mikheil Saakashvili, Ashville replied with instinctive national pride.

“Our hearts go out to him because we spent 26 centuries in Georgia since the destruction of the First Temple,” Ashville said.

In an essay on Georgian Jewry,historian Valery Dymshits suggested that this perspective is not unusual within the community.

“Georgian Jews are more integrated into the culture of their surroundings than their counterparts in any other community,” Dymshits wrote in an essay accompanying an exhibit in a Russian museum. “Remarkably, Georgian Gentiles and Jews both boast that anti-Semitism has never existed in Georgia, although historical facts attest to the contrary.”

That sense of rootedness, as well as religiosity, differentiates the Georgian Jewish community in the United States from the Russian community here. Russian Jews under Josef Stalin (himself a Georgian) “washed out God from their hearts,” Ashville said. His community in Queens has a closer relationship with the Bukharan community of Jews from Uzbekistan and Tajikistan, he added, noting that Bukharans in the neighborhood attend the synagogue.

Leah Moses, a correspondent for the Russian-language newspaper Russkaya Reklama who writes about Soviet Jewish émigré communities, said that Georgians and Russians, along with other Jews from the former Soviet Union, do in fact interact. “They consider themselves one community, in general,” Moses said.

As to how relations between Russian and Georgian Jews would fare in light of the escalating conflict in Georgia, Moses said that opinion among Soviet émigrés seemed to be forming along ideological rather than national lines, with some favoring Russia and some favoring a turn toward the West.

Georgia on Their Mind: Expats Forced To Juggle Dueling Identities