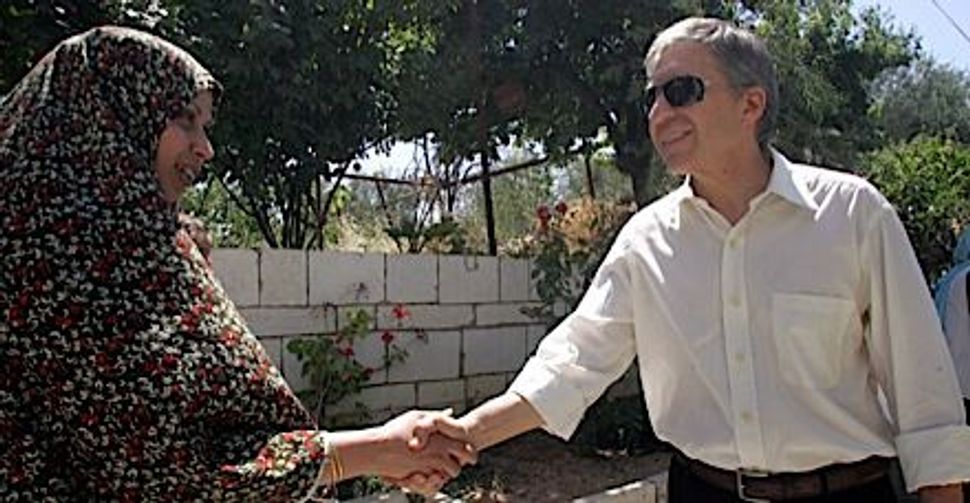 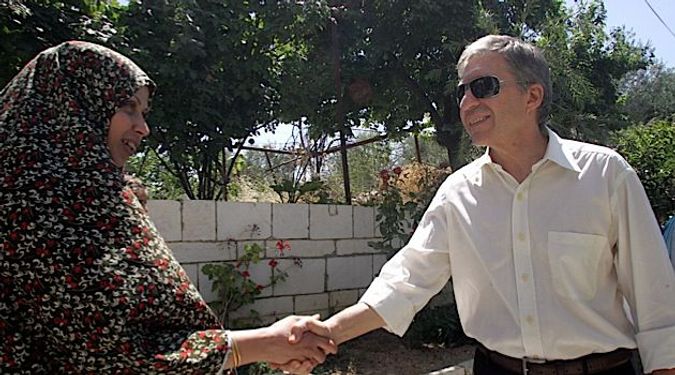 Fading Hope: Peace activist Yossi Beilin, right, was among those who attended a two-day International Media Seminar on Peace in the Middle East, in Budapest. Above, Beilin, during a visit to Hebron, in 2008. Image by getty images

On the boat sailing along the Danube River, Israeli and Palestinian peace activists seemed closer than ever. Sipping Hungarian wine on deck and sharing laughs, diplomats, prominent activists and journalists from both sides formed a close pact, joking over their own roles in what is widely known as the peace industry.

But while the industry remains vibrant, peace has never seemed further away.

The Budapest seminar kicked off only hours after members of the Quartet on Middle East Peace — made up of representatives from the U.S., U.N., European Union and Russia — failed to come up with any plan for resuming Israeli/Palestinian peace talks. The Quartet’s July 11 gathering in Washington was seen as a last chance for reviving the peace process and for potentially convincing Palestinians to give up their U.N. bid.

“They failed because they couldn’t deliver Israel to accept Obama’s speech,” said seminar participant Riyad Mansour, who heads the Palestinian mission to the U.N.

“It’s a catastrophe,” agreed conference member Yossi Beilin, a former Israeli politician and cabinet member who spent the ’90s in the peace trenches. “The world doesn’t know what to do with us anymore. They are saying, ‘Let them bleed.’”

Gloomy Israeli activists spoke of there being little chance for any movement on either side, and Palestinians, disappointed with Israeli refusal to compromise, and with what they view as American impotence, embraced the move for achieving statehood through the U.N. General Assembly as their last resort. Negotiations, both sides agreed, are not in the cards.

The discussions, taking place in formal meeting rooms as well as in impromptu hallway gatherings, were part of the two-day International Media Seminar on Peace in the Middle East, which convened in Budapest on July 12.

To some extent the gathering, sponsored by the U.N. and hosted by the Hungarian Foreign Ministry, could be seen as a dress rehearsal for the upcoming U.N. General Assembly meeting in September: Both sides polished their arguments, went over the pros and cons of declaring independence time and again and returned to their homes with just as much self-conviction as they had upon arrival.

Setting the tone for the Israeli malaise was Beilin, famous as a key player in pushing forward the 1993 Oslo Accords and making the case, both when in power and as the opposition, for urgent action on a two-state solution.

“We tried our best, and we failed,” admitted Beilin as he spoke to the small group of Israelis, Palestinians and international mediators convened in Budapest. “In Israel, we have a right-wing government, and you, the Palestinians, have the Hamas in Gaza.” The otherwise soft-spoken Beilin raised his voice when scolding the audience, and himself, too, for maintaining a business-as-usual attitude at a time when the peace process is in its last throes. “This is not the ’90s, when the sides wanted to solve the problem,” he exclaimed. “Now, there is nothing. Are we blind?”

Ron Pundak, another household name in the peace process industry, later weighed in, saying he is “even more pessimistic than Yossi Beilin.” Pundak, who recently resigned his post as director of the Peres Center for Peace in Tel Aviv, pinned his hopes on Israelis taking to the streets following a U.N. vote on Palestinian statehood, demanding change from their own government.

Absent were any representatives of the Israeli government or individuals supporting Benjamin Netanyahu’s approach to the Israeli/Palestinian conflict. Israel views these U.N.-sponsored gatherings as being biased in favor of the Palestinian side and routinely votes in the U.N. against funding such projects.

But as Israeli peace activists despaired over prospects of seeing their dream of a two-state solution ever coming true, Palestinians seemed emboldened and energized by their exciting new adventure, which is expected to take place at the U.N. in September.

“Our independence is not an issue for negotiations,” declared Mansour, the Palestinian U.N. mission chief. Over the past year, Mansour has been the driving force behind Palestinian attempts to gain support for statehood in the U.N. He keeps a close watch on the tally of supportive countries, stating that, come September, at least 130 U.N. members will raise their hands in favor of Palestinian statehood, ensuring an easy approval of the resolution.

In the friendly debate with Israelis that — as is often the case with Middle East gatherings — spilled over from the formal discussion room to the smoking corner, Mansur gladly took on any challenge to the idea of obtaining statehood through the U.N. “It is not unilateral,” he stressed, trying to fight off the notion that has already became an acronym in the world of pro-Israel advocacy – UDI – Unilateral Declaration of Independence. Mansur was also ready to respond to any practical obstacle that could derail the Palestinian move.

To those who claim the process is lengthy and requires early registration on the U.N. agenda, he points to South Sudan, which was accepted as a member state in less than a week. When faced with the argument that joining the U.N. would require a Security Council resolution, which will surely be vetoed by the U.S., Mansour smiled and pulled out his winning card: Israel, back in 1947, achieved U.N. recognition without going through the Security Council. He checked the records.

The idea of going on their own or, as Mansour put it, “deciding that our destiny is in our own hands,” appeared to be the force injecting enthusiasm into the Palestinian camp. Defiance, as it relates to the U.S. and its Western partners, is the new name of the game.

“We had become unreasonably reasonable in taking into consideration the views of the international community,” argued Afif Safieh, a veteran Palestinian diplomat who has served in Washington and Moscow. Safieh, an eloquent public speaker who easily weaves Shakespeare and George Bernard Shaw into his pro-Palestinian advocacy rhetoric, rushed from the seminar in Budapest to East Asia, part of the Palestinian diplomatic barrage in the run-up to the U.N. vote.

Disillusionment with the international community could be the only common thread Palestinians and Israelis still share.