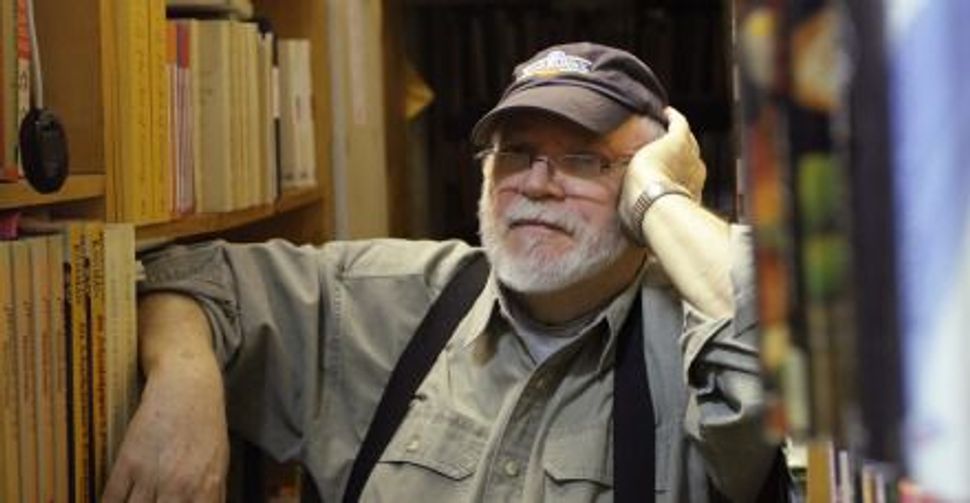 In the quiet moments before Kitchen Arts & Letters opens for the day, owner Nach Waxman unlocks the door for a visitor and apologizes.

“I’m sorry for the disarray,” Waxman says, his white-bearded face smiling wryly beneath a Blue Bunny ice cream cap, his trademark suspenders secured in the fashion of a man at work among his wares. A wall of 75 large boxes snakes behind him like a labyrinth among the already snug aisles of this storefront on Manhattan’s Upper East Side. “What you are looking at is the big story of the food world this year,” he explains.

No, the most renowned culinary bookstore in America — maybe the world — is not packing up to close in the face of 21st-century Internet competition. Quite the contrary. The “big story” is inside those 47-pound boxes: Each contains the new 2,400-page masterwork called “Modernist Cuisine” from Nathan Myhrvold, former chief technology officer of Microsoft. And Waxman’s Lexington Avenue store, known among literary gastronomes for the past 28 years as the go-to merchant for hard-to-find food titles, is bristling with orders. Every one of these boxes is spoken for, waiting for a label to ship out the door.

“Nach, there’s a note here from Alfred Portale,” longtime store manager Matt Sartwell calls from the register, referring to the famous chef of Gotham Bar and Grill. “He wants his ‘Modernist’ sent over.”

At $525 for each five-volume set, brisk interest in the much talked-about project has been an obvious financial boost for this independent bookstore.

“But a book like this means so much more to us than the dollars,” says Waxman, whose nickname (pronounced “Knock”) is short for the first name Nahum. “This is a major, major work, with new approaches and new methods on everything from kitchen basics to molecular physics. Nobody’s going to be able to do another book like this for a long, long time.”

The intellectual passion that flashes in Waxman’s eyes when he talks in raspy-voiced rapture about Myhrvold’s french fry scholarship or the book’s striking cross-section photography is very much at the heart of what has long made this store so special. The inventory of 13,000-plus titles is one of the most comprehensive food-writing collections for sale around, but Waxman chooses to sell only a quarter of the books he’s shown. Just a portion of those have actual recipes, like the latest Joan Nathan title on Jewish cooking in France, “Quiches, Kugels and Couscous” (“a fine piece of cultural study,” Waxman says), the recently translation of Jan Hedh’s “Swedish Breads and Pastry,” or a coveted foreign-language title like “Terroir Parisien” from three-star French chef Yannick Alleno. Others are just as much books on history, culture, memoir or literature as they are about what to make for dinner, whether a work is about Japanese fish markets, food styling, the role of cuisine in the plays of Molière or a tome of Roman food poems (“we don’t kid around here.”)

“Recipes are a dime a dozen. Anybody can get recipes off the Internet,” he says. “But recipes aren’t the whole story. We want books that show how it all fits together — that show every aspect of how food impacts our life…. We carry books here you didn’t know existed until you came — and that’s the kind of serendipity you still can’t find online. We don’t sell any books here without a conversation.”

That combination of scholarship and personable curiosity comes naturally to Waxman, 74, who spent an “indecent amount of time” as a graduate student in anthropology and South Asian studies at the University of Chicago and at Harvard before abandoning academia for an 18-year career in book editing, including a dozen years at Harper & Row, where he edited food books among other subjects. Since he founded the store, in 1983, that spirit remains part of what has made it a magnet for amateur enthusiasts and food professionals alike, many of whom come to browse for a dose of inspiration.

“Nach and Matt offer the kind of advice you just don’t get at Barnes & Noble,” says Portale, who visits several times a year to buy a shopping bag full of books. “That’s how I get into a creative place.”

Waxman is no chef, but he has inspired a fair share of cooks with at least one original dish: a brisket recipe distilled from both his mother and grandmother and first made famous in “The New Basics Cookbook” by Julee Rosso and Sheila Lukins. Heavy on the onions — “without a drop of water!” — it also boasts a novel technique (slicing partway through cooking, then tilting the meat slightly, like a deck of cards, to maximize edge exposure) that accentuates deeper browning on every slice. (“That’s why people always want the edges, right?”)

Author Stephanie Pierson, who includes a chapter on cooking with Waxman in her ode to the meat, “The Brisket Book: A Love Story With Recipes,” coming in October from Andrews McMeel Publishing, gives his recipe her stamp of certified brisket stardom: “I can’t prove it, but I think it’s the most popular brisket recipe on the Web. Also, was Nach’s the brisket served at the first Obama Seder? An article in The Huffington Post never quite says it, but implies that it might be.”

It is perhaps not surprising that food should offer a public window into Waxman’s Jewish heritage. But Judaism figures prominently in Waxman’s private life, too. His son, Joshua Waxman, is a rabbi at Or Hadash — a Reconstructionist Congregation, in Fort Washington, Pa., near Philadelphia. His wife, Maron, also a former editor, is on the board at Ansche Chesed, the Upper West Side Conservative congregation where Nach also sings bass in the chorus. Their daughter, Sarah, is a lawyer in Chicago.

Named for his grandfather, Nahun M. Waxman, a Romanian Jew who abandoned his attempt at homesteading the Dakota territories in the late 1880s to sell optical supplies on the East Coast, Waxman grew up in a kosher home in the agricultural community of Vineland, N.J. The son of Minnie and Jerome, his father sold real estate insurance to the Jewish-owned poultry farms in the area. He watched during the 1930s and ‘40s as waves of immigration shifted the origin of those farmers to Eastern Europe from Germany (“they went from ‘Wimpfheimer’ to ‘Vishniak’”), and those farms served as agricultural training grounds for Zionists who’d soon become the kibbutzniks of Israel.

“Jews made up a substantial part of Vineland’s population by that time,” Waxman says. “You could walk down Landis Avenue and see [concentration camp] tattoos on every third person on the street.”

Even so, Waxman’s parents decided he needed to commute to Philadelphia to attend a Jewish day school. So Waxman took the 6:53 train each morning to the new Akiba Hebrew Academy in the Strawberry Mansion neighborhood, returning to Vineland each night, nearly 12 hours later. The school has since moved multiple times, most recently to Bryn Mawr, Pa., where it was renamed the Jack M. Barrack Hebrew Academy in 2007, after a $5 million gift.

“A lot of us are still pissed off as hell about [the name change],” Waxman says grumbling, “but that’s the way of the world, right?”

The Hebrew education nonetheless left a lasting mark on Waxman, who for the past 20 years has been part of a tight-knit Sunday reading group that analyzes Hebrew texts with an academic eye, considering everything from the translations and etymology of words to the archaeology behind the stories.

“In fact, we just finished the book of Joel — my middle name — yesterday,” he says. “He was an extremely fine poet, and the Hebrew just sounds terrific to read…. The group is intellectually challenging, and if we can’t get together for a session, we’re really distraught.”

Waxman rises from his stool amid the front room and its stacks of “Modernists,” and decides to take his tour of Kitchen Arts & Letters down to the basement, descending gingerly down a steep staircase to a rambling catacomb of shelves stuffed with more books.

“Welcome to the belly of the beast,” he says, “this is where the store really begins.”

While the upstairs is stocked with largely available current titles, this is the area where Kitchen Arts houses its rarest treasures — extensive collections of culinary journals, historic tomes and final copies of books that Waxman deems “significant contributions in their field,” as well as out-of-print editions that Waxman is saving until that right client comes along.

He offers an example: “They might come in and say, ‘I’m looking for a special signed boxed-edition of Richard Olney’s ‘The French Menu Cookbook.’ Yeah, we can do that.”

But how to choose which customers are worthy of such special consideration? The opinionated Waxman is as skilled at curating his clientele as he is at managing the store’s catalog.

“This book would be gone in 15 minutes if I put it out on the floor upstairs,” he says, pointing to a high corner shelf where a hardbound first edition of “White Heat,” by British bad boy chef Marco Pierre White, sits in pristine condition. “I don’t want to sell it to someone who’s going to put it on their shelf like a bowling trophy, but perhaps to someone who’s interested in post-World War II English cooking, to whom this would mean something.”

Before the tour is complete, Waxman heads to an even smaller back corner of the basement, a tiny vault of a closet that used to be the walk-in refrigerator when this address was a butcher shop. The shelves here contain what seems a perfect cross-section of his personal and professional interests — a collection of vintage Jewish cookbooks. There, one can find a 1960s stuffed cabbage recipe from the sisterhood of Congregation Brith Emeth near Pepper Pike, Ohio. In a Manischewitz book from the early 1930s, meanwhile, there are recipes for “farfel pudding No. 2,” “matzo schalet” and “vaffels” written with instructions in both English and Yiddish.

“These are suddenly in demand, now that people are rediscovering Yiddish,” Waxman says with the matter-of-fact tone of a sage who knew all along that such a resurgence would occur. But, of course, those new Yiddish scholars will have to travel to the Upper East Side and pay a visit to Waxman himself: “These,” he says, “these are not for sale.”

Craig LaBan is the restaurant critic and drink columnist for the Philadelphia Inquirer.