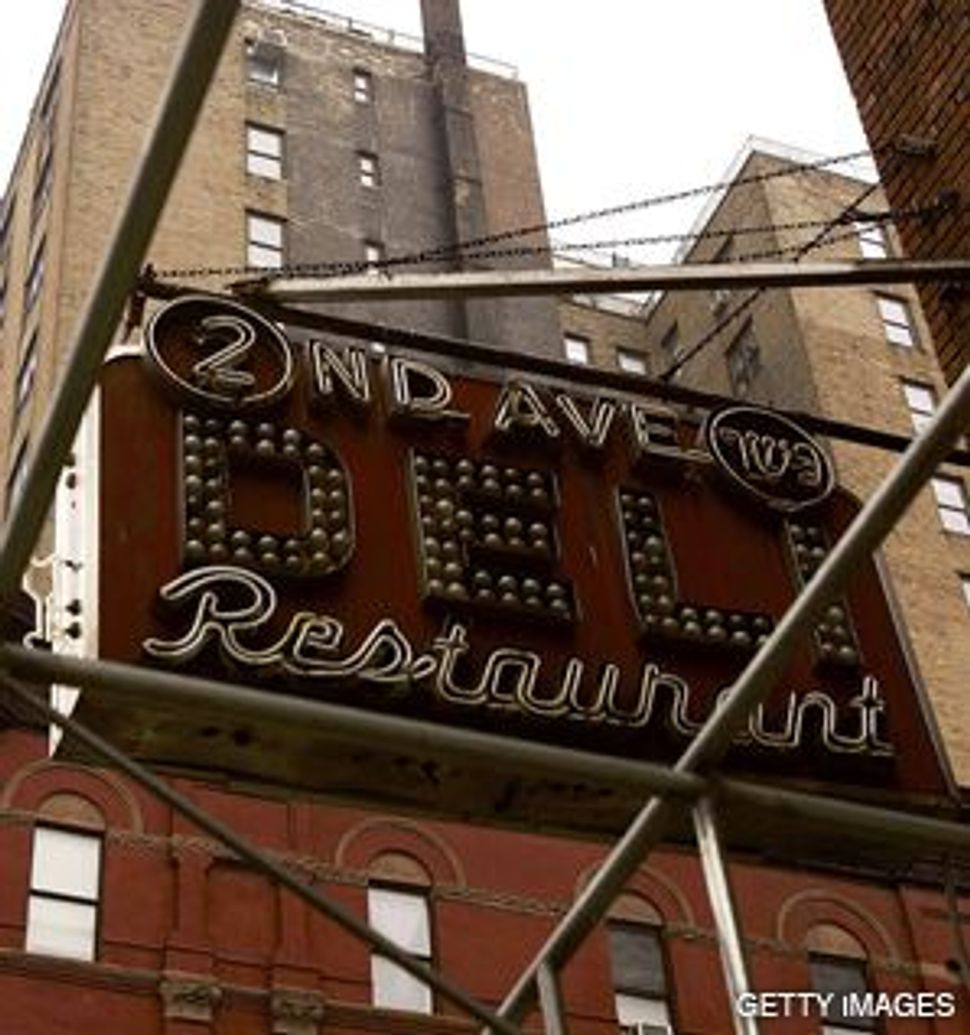 TWIN DOUBLES: The Mamele ate her last meal before giving birth to Josie at the original location of the legendary 2nd Avenue Deli. The restaurant recently reopened on East 33rd Street. 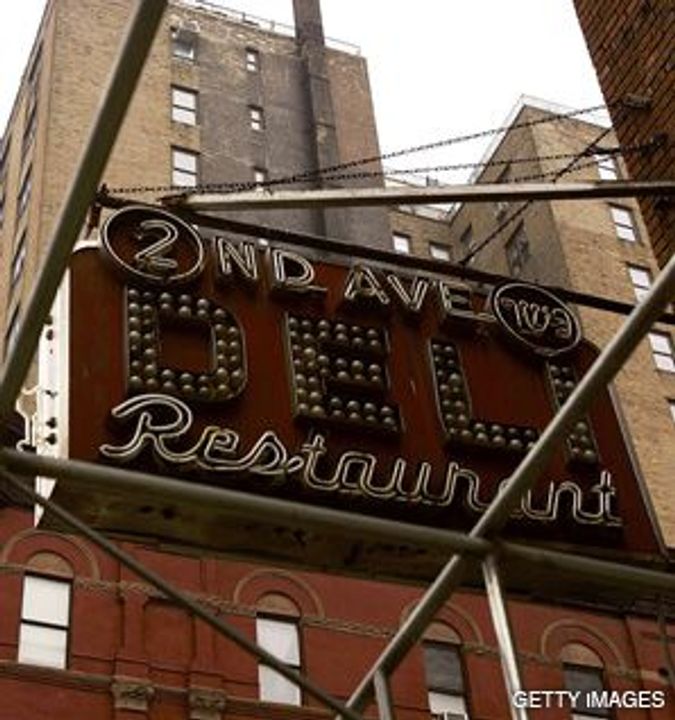 TWIN DOUBLES: The Mamele ate her last meal before giving birth to Josie at the original location of the legendary 2nd Avenue Deli. The restaurant recently reopened on East 33rd Street.

Everyone knows the story. The 2nd Avenue Deli opened in 1954. The pastrami and corned beef were sublime. The place shut in 2005 after a rent dispute. Last year, when the long-shuttered building finally reopened as a Chase bank, the entire East Village scowled: One more neighborhood institution replaced by an emblem of soulless corporate suburbanization.

And then joy! Rapture! The deli’s reopening on 33rd and 3rd! (I’m not making a toity-toid and toid joke. You’re welcome to, though.) I finally visited, and nearly did a hora on the table. The meat was as good as in its glory years. The pasty was perfectly salty and tangy and peppery; the corned beef had the perfect amount of fat. The matzoh ball soup has never floated my matzoh ball; it is, as it ever was, full of dill, the devil’s own herb. Feh. But it has its passionate fans, people who like dill and are therefore delusional. And I am told the matzoh balls require tiny anchors, lest they fly right up out of the dilly broth in their impossibly airy lightness.

Like many New Yorkers, I have my own 2nd Avenue Deli story. The old location was a few blocks from my apartment, and it was our go-to restaurant when my parents were in town. My dad, olav hashalom, adored it and its oft-sullen elderly waitstaff. We all rhapsodized about the chopped liver, the perfect pickles, the Cel-Ray, the pictures of Molly Picon on the walls.

And it was the scene of my last pre-Josie meal. I was a week overdue. I’d battled for a hippie low-intervention pregnancy in a midwifery practice that turned out to be not so hippie-friendly. I was feeling over-tested, over-prodded. Each test seemed to indicate a possible problem, causing me to panic, until subsequent, more detailed tests indicated no problem. Then the sonogram doc at St. Vincent’s Hospital announced that all my amniotic fluid was gone and the fetus was in danger and I had to be induced immediately. As I started to whimper, Jonathan stepped in. Could we go home and get a sandwich first? Grudgingly, the sonogram guy agreed. We had two hours.

We went right to the deli. I sat at the table and wept, mourning my dream of patchouli-granola mystical drug-free non-medicalized labor and delivery. (Yes, I’m a drama queen. I own it.) When Jonathan explained our time constraints and my snuffling, the brusque waitresses with spun-sugar dyed hair immediately began buzzing around, sweet and solicitous. “It doesn’t matter how you have the baby!” one told me. “What matters is you’re gonna have a baby!” They showered us with free chopped liver. Jonathan ate his Twin Doubles (two bulkie rolls, one with corned beef and one with pastrami); I nibbled on my corned beef sandwich. When we left to get our bags and race back to the hospital, they pressed free rugalach into our hands.

As I’d predicted, the birth was not the om-shakti feel-the-surge experience I’d wanted. But Jonathan draped the room in little white fairy lights, and I focused on them. And eventually I found myself holding a 9 pound, 10 ounce baby, kissing her fat pink cheeks and cooing to her. The sonogram doc had confidently predicted that she’d be around 8 pounds. The hospital pediatrician, seeing her, announced, “That’s not a baby, that’s a Volkswagen!” After I called my parents, my dad immediately posted an update to his Web page: “At least a pound of her is corned beef.”

And as I cuddled her, in the room filled with fairy lights, my husband by my side, I ate the rest of my sandwich from the day before. It was delicious.

A few days later, Jonathan and I went out to dinner with our daughter for the very first time. Nu, where else would we go? We sat in front of our stainless-steel bowl of pickles, looking around like Martians, astonished at the world. At last we spotted the waitress who’d given us such wise birth advice; she was working in the Molly Picon room. I’d wondered whether she’d remember us, but the moment she saw us she shrieked, “Ach! Mazel tov! Mazel tov!” She bustled over. “Oh my God,” she said, in the strongest possible New York Jewish accent. “That is the most beautiful baby who has ever been in this restaurant!”

But time does its inexorable marching business. The 2nd Avenue Deli went away. I had another baby. The granite plaques commemorating the stars of the Yiddish theater, still embedded in the sidewalk in front of the Chase bank, have gotten harder and harder to read. Maxine, now 3, likes to leap from one to another, insisting she’s playing hopscotch or pretending she’s leaping from stone to stone across a river.

A couple of years ago, New York magazine lamented the death of Jewish food in New York City. Most of the appetizing stores, kosher delis, egg-cream vendors, and Roumanian schmaltz-parlors are gone. The magazine noted the ascendance of “Bar-B-Jews” — tribe members who run palaces of pulled pork: Men like Danny Meyer (Blue Smoke), Adam Perry Lang (Daisy Mae), Andrew Fischel (R.U.B.) and Mark Glosserman (Hill Country). But now, the 2nd Avenue Deli is bringing Jewy back. The restaurant is currently being run by 20-something nephews of the original proprietor. Josie’s zayde is gone; he never got to meet Maxie. The Lebewohl family, which owns the 2nd Avenue Deli, has suffered its own losses. But the Deli abides, and it is better than ever. When I bit into my corned beef sandwich, tears sprang to my eyes, mightily amusing my lunch partners.

I can’t wait to bring the kids.