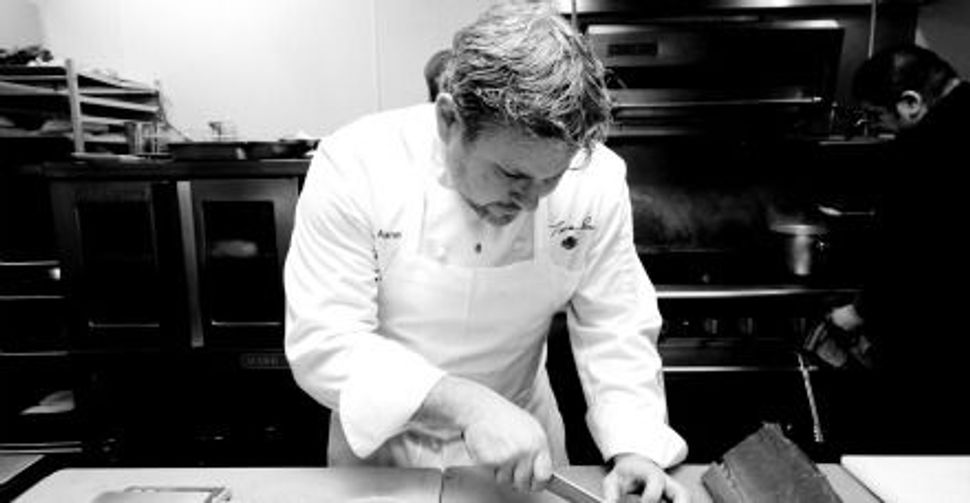 Duck leg confit served with white bean cassoulet. House-made lamb bacon. Mexican-inflected California cuisine. Not the offerings you would have expected at a kosher restaurant 20 years ago, perhaps not even a decade ago. But a handful of high end, innovative kosher restaurants, primarily in the gastronomic capitals of New York and California, have sprouted in the past decade, immutably changing the kosher dining landscape. 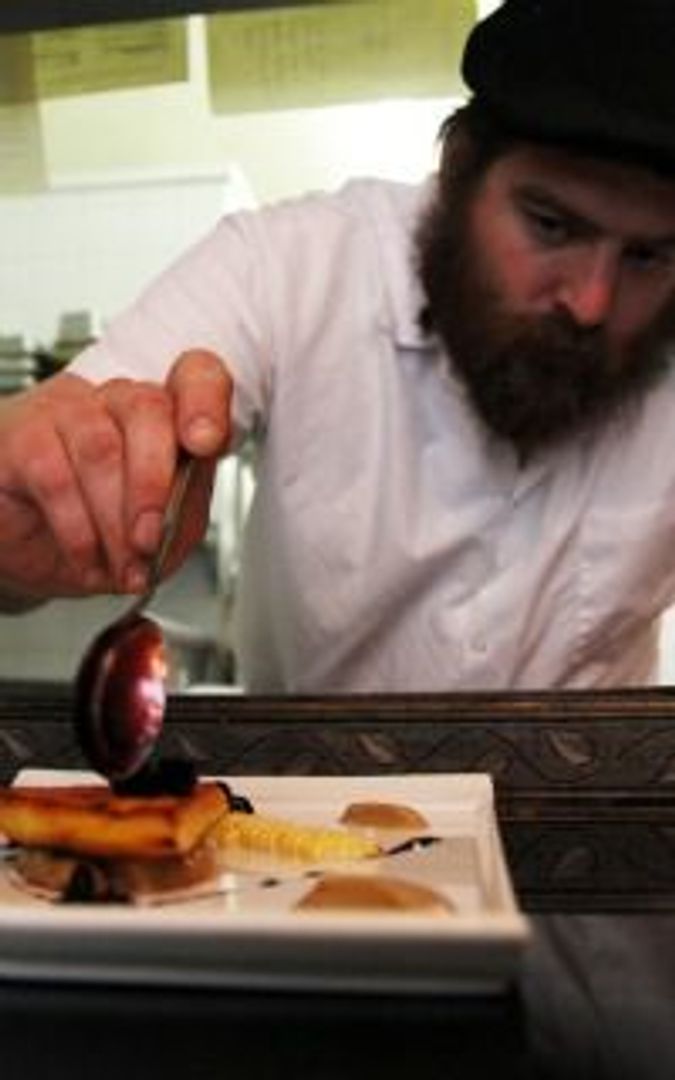 Deliciously Kosher: Moshe Wendel puts the finishing touches on a dish at Pardes, his restaurant in Brooklyn. Image by Saul Sudin

Much of this change has been propelled by baalei teshuvah chefs and diners, those who were raised in the religious world, left an observant life and returned, or those who became more observant later in life. “They’re driving the revolution” said Sue Fishkoff, author of “Kosher Nation: Why More and More of America’s Food Answers to a Higher Authority.” “Look at the chefs and the winemakers and the cookbook writers… so many of them are baalei teshuvah. They’ve come from the world of non-kosher food; they know it, appreciate it and are bringing it into the world of kosher.”

This small band of chefs has led the way in kosher dining, with restaurants that rival their local non-kosher competition. Pardes and Basil in Brooklyn, The Kitchen Table in Silicon Valley, Mosaica in Northern New Jersey, Tierra Sur at the Herzog Wine Cellars in Oxnard, Calif., and Moise in Jerusalem are all either run by or were opened by American chefs who spent considerable amounts of time eating and/or cooking non-kosher food. There’s a “small amount of us who have seen the other side and who are bringing it to the kosher side,” said Todd Aarons, founding chef of Mosaica and executive chef of Tierra Sur.

These chefs have brought their attention to detail, service and quality of ingredients, and even a sense of balanced food textures and colors to their kosher restaurants. And for the most part, they haven’t complained about the restrictions of the Jewish dietary laws, which prohibit some foods altogether and regulate the way others can be prepared and eaten.

“I never look at kosher as a set of limitations. I look at it as a set of flavors to work in,” said Josh Massin, a baal teshuvah chef and former chef de cuisine at Mike’s Bistro in New York.

“I’m not into imitation anything,” said Chaim Davids, a partner at The Kitchen Table in California, and a chef at Jerusalem’s Moise, about his kosher food. “Without certain ingredients, you just need to be more clever and resourceful than the next guy, building skills that ultimately will make you a better chef.”

While ditching pork and shellfish, and not mixing milk and meat, hasn’t proven difficult, finding ingredients of the same caliber that they were accustomed to, that are kosher, is a constant challenge for these chefs.

Many of these chefs credit Levana Kirschenbaum, former co-owner and chef of the Levana restaurant, as the main force for the past 30 years behind high-quality and elegant kosher food. “Levana was a game changer,” said Moshe Wendel, a baal teshuvah chef in Brooklyn.

Now, Aarons is considered by some to be this generation’s patriarch. In the mid 1990’s, while Aarons was cooking at Peter Hoffman’s legendary market-driven restaurant, Savoy, he began to search for something spiritual, dabbling in Buddhism and ultimately returning to Judaism. “I was working in a climate where everyone was looking for some spirituality,” he recalled. After attending lectures and seminars at local yeshivas, Aarons quit his job and moved to Israel. He returned a year and a half later observing Shabbat and kashrut. “It was a strange thing,” he recalled. “I had trained my whole career to cook one way, so the whole kosher thing was something I had to rectify in my mind.”

Aarons pondered how to cook the way he was trained. He tried working in non-kosher restaurants, cooking from memory and having other chefs taste his food. “I still made a good pork chop…. But I couldn’t enjoy it,” he commented. He later turned to kosher catering, where he was frustrated by what he found to be an unimaginative cuisine. “I knew kosher food didn’t have to be this way. The way I learned to cook in the non-kosher world, there was no reason those dishes couldn’t be kosher,” he said.

Aarons credits his background in Mediterranean cuisine, which contains many dishes that don’t mix milk and meat and relies heavily on olive oil instead of butter or animal fat, with providing a bridge to kosher food. His approach to food remained unchanged by his religiosity. “The whole mission is to have something taste good no matter what you have. Every day. That’s every chef’s job,” he said.

In 2002, Aarons opened Mosaica, a small kosher French-style bistro in Vauxhall, New Jersey. The restaurant was a hit, surprising a reviewer for The New York Times, who suggested that diners need not be Jewish to love the food. Aarons referred to the restaurant as “coincidentally kosher…. It’s just good food; it just happens to be kosher, too.”

Three years later, Herzog Wine Cellars approached him to open a restaurant at its California winery. Aarons opened Tierra Sur in Southern Calif., in 2005, serving local cuisine inflected with such Mexican flavors as homemade organic corn tortillas filled with achiote-marinated fish and served with tomatillo and mango salsa. Aarons has staffed his kitchen with a mix of local Mexican-born and Jewish chefs, some of whom trained outside the kosher restaurant community.

Davids was among these chefs, and later he went on to help open The Kitchen Table, the only high-end kosher meat restaurant in Northern California, known for its updated Jewish fare and local cuisine. Davids, who trained in a non-kosher culinary school while becoming more religious, developed a passion for charcuterie (meat curing) and learned the importance of balancing texture and color on the plate. “You go out to [non-kosher] restaurants, there’s crispy, crunchy food. You realize there’s a whole array of ingredients. You learn that the food’s a lot more colorful,” he said. At Moise, he brings his sensibility about local food to the menu with items like his constantly changing shuk, or market, salad, made with whatever vegetables and greens are freshest in the market, and lamb bacon and cured sardines, which are made in-house.

Wendel brought to the kosher world his emphasis on the quality of ingredients, that he learned while cooking in France and at two of Philadelphia’s top restaurants. When he became more traditionally observant, he moved to New York to seek cooking opportunities at a kosher restaurant. He worked at Mosaica for two years (though after Aarons had left), and in 2010 he helped open Brooklyn’s Basil Pizza & Wine Bar, the latter serves artisanal pizza and Italian dishes, like white asparagus saffron risotto, and is frequented by both Jewish and non-Jewish diners. A year later, he broke away to open his own Brooklyn restaurant called Pardes, which, he said, serves “progressive seasonal French food.”

Today, it’s now not enough for a restaurant just to be kosher in order to succeed: for a mainstream restaurant to last, good service is crucial. Massin, who will soon become a chef at an upscale New Jersey restaurant, commented: “Polite, efficient, quiet service…. I knew the types of experiences I wanted customers to have.”

The work of these chefs didn’t come without challenges. While most have relished their deeper observance, each vocalized a struggle with the ingredients available. “Ingredient issues can be really infuriating,” Wendel said. West Coast chefs have worked hard to find the quality and variety of kosher meat they want. Organic vegetables, which can be laden with small bugs, rendering them unkosher, have also proved difficult to work with. Aarons said that he’s consistently “battling product quality, but it’s coming around. It’s a constant search…. [I’m] left with the decision to serve sub-par food or not serve it.” He, like the rest of these chefs, refuses to compromise — on his religious practices or on the food he serves.