Rehab Programs Counter Substance Abuse With an Infusion of Judaism 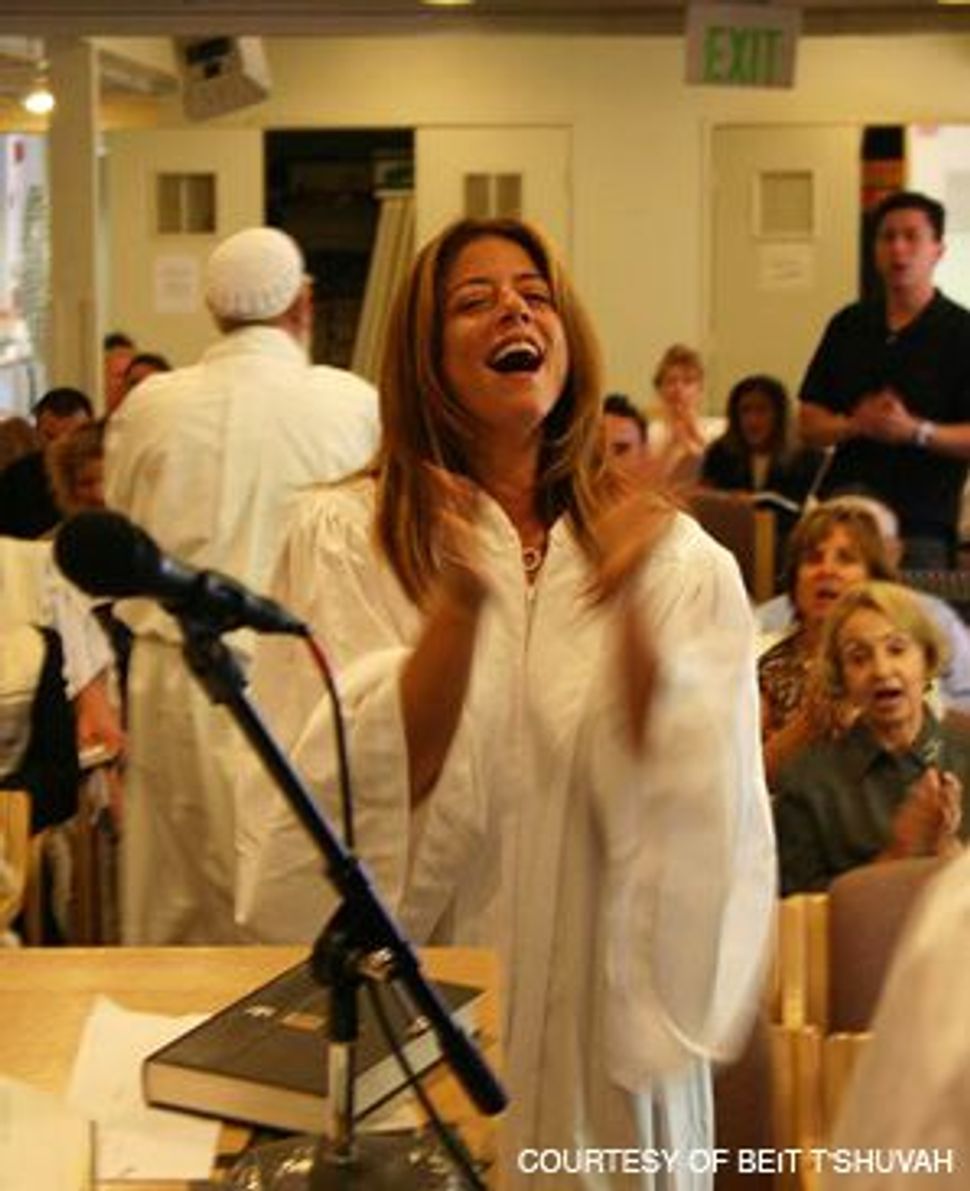 Los Angeles — Four recovering addicts celebrated their sobriety “birthdays” on a recent Friday, in keeping with an Alcoholics Anonymous tradition. But the celebration occurred during a Sabbath service, and the prayer expressing gratitude for recovery from addiction was recited alongside the Shema. 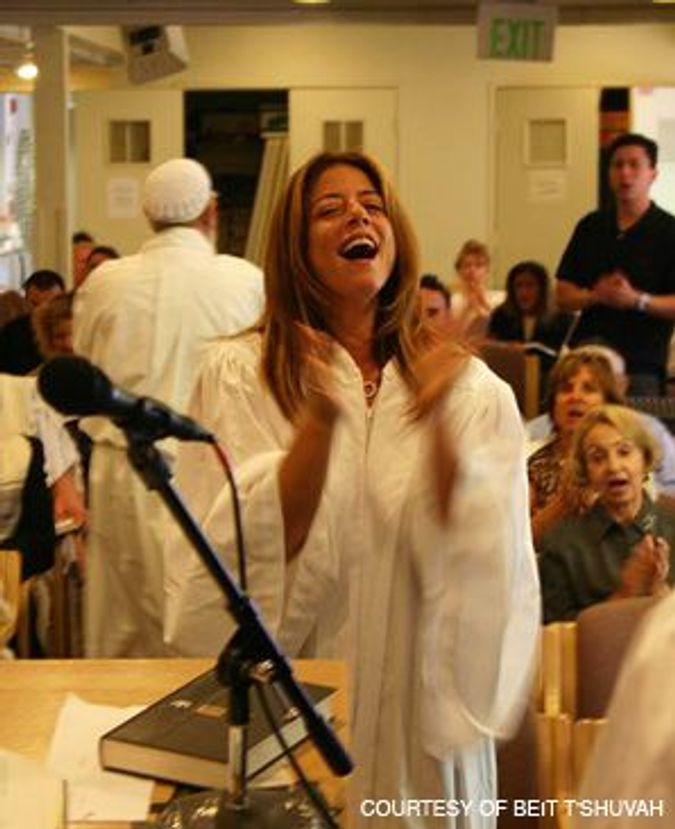 The venue was Beit T’Shuvah, so far the country’s only Jewish residential treatment center for drug and alcohol addiction, located on the west side of this sprawling city. Beit T’Shuvah, Hebrew for “Home of Return,” has long offered a unique blend of Judaism and the Twelve Steps — an A.A. model of treatment — that now is becoming a model for other recovery programs nationwide. From Minneapolis to Seattle, Jewish addicts and communal institutions alike are taking a cue from Beit T’Shuvah and beginning to recognize the demand for more Jewishly focused recovery programs.

Such efforts defy the popular — and, Jewish addicts say, destructive — myth that Jews do not suffer from alcohol- and chemical-dependency issues. “Even while I was drinking, the idea that I was an alcoholic was not possible, because Jews were not alcoholics in my mind,” said Barb Adelman, a Minneapolis native in recovery. “It was just not talked about.”

Adelman, 27, is part of a small group of Minneapolis Jews who have undergone treatment for addiction and are looking for ways to connect with other Jews facing down the same demons. Adelman, who grew up spending summers at Camp Ramah in Wisconsin, said that after a stay at Hazelden — a world-renowned drug- and alcohol-treatment center in Center City, Minn. — she would have liked some kind of follow-up in her local Jewish community.

In 2004, as she began to connect with God during her recovery, she returned to Judaism. But finding other Jews she could turn to for support proved challenging. “It’s very common,” Adelman said, “that if you’re a Jew in recovery, you feel like you’re the only one.”

In response, Adelman teamed up with a fellow Jew in recovery, and the two are now in the early stages of conceiving of a privately funded Minneapolis aftercare center, where Jews struggling to stay sober can congregate.

On her search for fellow Jewish addicts in recovery, Adelman wound up in New York at a retreat sponsored by JACS: Jewish Alcoholics, Chemically Dependent Persons, and Significant Others. A program of New York’s Jewish Board of Family and Children’s Services, JACS was founded in 1979 by New York’s UJA-Federation. Like Beit T’Shuvah, JACS has been addressing addiction in the Jewish community for decades, even as the broader Jewish community showed little interest in the issue.

“It could be Friday night, saying Kiddush, or on holidays, or even the habit that many people have of gathering to study together and having a bottle of wine or schnapps to say a ‘L’chaim,’” Katz said. “If there’s not an awareness about the risks that aspects of these events can pose for vulnerable members of the community, it’s really a problem.”

In Seattle, another Jewish communal agency recently began its own program to address chemical dependency. Jewish Family Service, with grant monies that include $75,000 from the Jewish Federation of Greater Seattle, in April started “Alternatives to Addiction.” The program, led by Eve Ruff, a 53-year-old addiction counselor who is herself a recovering alcoholic, was conceived several years ago as JFS started receiving an increasing number of requests for help.

“The rampant denial wasn’t matching up with the calls we were getting,” Ruff said.

In fact, Seattle’s JFS estimated that at least 3,000 local Jews — including family members affected by their loved ones’ addictions — could benefit from a program.

The resulting initiative includes the first A.A. meeting in the Seattle area that does not take place in a church. A.A.’s trademark Twelve Step treatment program takes a spiritual approach to recovery, one that is often injected with strands of Christianity. Recitation of the Lord’s Prayer, for example, is a typical way to close an A.A. meeting.

As a result, Jews can sometimes feel uncomfortable in such settings. “I have people who wouldn’t go to A.A. meetings before, people who are looking for a Jewish space,” Ruff said. The JFS meeting now draws about 25 people a week, and about 90% of its participants are Jewish.

While Seattle JFS received a grant from its local federation, Jewish communal organizations do not typically sink large amounts of money into addiction programs. Beit T’Shuvah opened in 1987 with a loan from the Jewish Community Foundation of Los Angeles, but today only a small percentage of the house’s budget comes from Jewish institutions. A mere $120,000 of the house’s $4 million operating budget comes from the Jewish Federation of Greater Los Angeles.

“Had we waited for the organized Jewish world to get to it,” said Beit T’Shuvah’s founder and director, Harriet Rossetto, “we’d still be waiting.”

Rossetto, a Jewish social worker, initially opened Beit T’Shuvah to house Jewish inmates upon their release from prison. Her mission expanded, and the house — which moved in 1999 to the West Side from downtown L.A. — now treats some 2,500 Jewish addicts a year, with most staying for nine-month periods. Between 60% and 65% of those who enter the program stay sober for at least five years. That statistic is higher than a similar statistic for Hazelden, where 53% to 56% of those who undergo treatment stay sober for a year.

Rossetto — whose husband, Mark Borovitz, is an ex-con who now serves as Beit T’Shuvah’s rabbi — credits much of her success to her unique blend of Jewish spirituality and the Twelve Steps. Residents rise at 7 each morning for Torah study and attend weekly Friday night and Saturday services, which are far more loose and lively than a typical Sabbath service. Residents also get a full range of therapies, which include pottery, theater, music and, seeing as the house is in Southern California, surf therapy.

Beit T’Shuvah, which garners about half of its operating costs from private donations, does not accept government funding. If it did, Rossetto explained, the house would not be allowed to mandate religious services. And it is those services, Rossetto said, that not only help people stay sober but also help them stay Jewish.

“For many residents, the idea that Judaism has relevance to their lives is a revelation,” she said. “But they get turned on to it here.”

Rehab Programs Counter Substance Abuse With an Infusion of Judaism