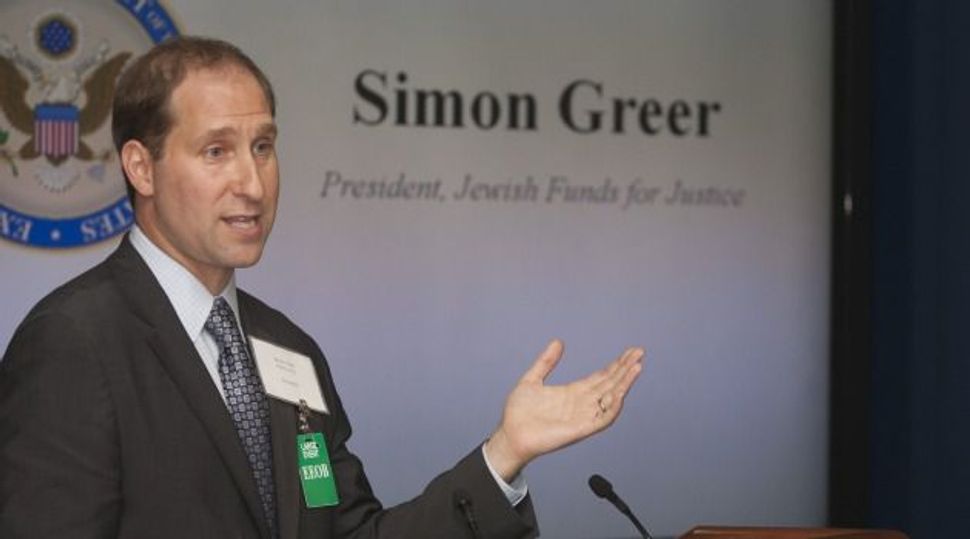 Moving Ahead: Simon Greer is leaving his post as head of Jewish Funds for Justice. The group says it has no plans to change course. Image by Kristian Whipple

The Jewish Funds for Justice, a leading American Jewish organization focused on domestic economic and social policy, is losing three of its top executives just as it works to broaden its public profile.

Despite the departure of CEO Simon Greer and two key aides, the group insists it will push ahead with ambitious expansion plans.

Greer will leave in January to become president of the Nathan Cummings Foundation, a Manhattan-based family philanthropy with $440 million in assets that is a major funder of innovative projects in areas including the environment, health care, the arts and Jewish life.

Jeremy Burton, JFSJ’s vice president of philanthropic initiatives, has been appointed the new executive director of the Jewish Community Relations Council of Greater Boston. Mik Moore, JFSJ’s chief strategy officer, left as a staff member in July. After a summer-long sabbatical Moore will work as a part-time consultant to the new organization, Greer said.

The staff exodus came just weeks after JFSJ merged with the Progressive Jewish Alliance, a California-based group, in June. The new, merged group will announce a new name around the High Holy Days, Greer said in an interview.

The Progressive Jewish Alliance was a 12-year-old group based in Los Angeles with a focus on economic and social justice, leadership development and grass-roots community organizing. The JFSJ, based in New York, was an organization focusing on advocacy, grant making, direct service work and investing for community development in low-income areas around issues of poverty and housing.

The merger gives PJA national reach and the JFSJ a way to develop a regional structure, said Barrett.

A search will soon begin for a new CEO for the merged organization. Barrett and Stosh Cotler, JFSJ’s executive vice president, will stay on as senior leaders.

Mergers are nothing new to JFSJ. It was founded in 1984 to develop synagogue-based community organizing and ameliorate American poverty through strategic Jewish grant funding. In 2006, soon after Greer was appointed to run JFJ, it merged with the Shefa Fund, which had been focused on using investments to achieve the same goal.

The following year, JFSJ absorbed Spark, a group established by philanthropists in Baltimore in 2000 to emphasize service work as part of Jewish identity. It also absorbed the Seminary Leadership Program, a social justice training course for rabbinical students across the denominations, and the Selah Leadership Program, a management training course for Jews working in any organization focused on social justice.

Other projects in which the organization is involved include investing in an anti-foreclosure mortgage product to help those at risk of losing their homes in the Boston area and micro-lending to small businesses in the hurricane-ravaged Gulf Coast region.

“Our view was always that it’s about building a sector. Three mergers later, part of it has been about consolidating organizations and part trying to make some order in the sector,” Greer said. “Now I’ll be running the organization that is the biggest funder of this sector.”

As for the executive staff changes at JFSJ, it is simply happenstance that the three senior leaders are leaving the organization at about the same time, they say.

“I’d be happy being here for many more years but sometimes opportunities come along with non-fortuitous timing,” said Burton, who will start in his new job in October and says he is the first openly gay, multi-ethnic Jew to be hired to run a mainstream Jewish organization. Burton’s mother is Mexican-American, he said.

“We built a very strong organization. The programs here and work we do is on solid footing, and while there is plenty I could do if staying, the team we built is the right one to keep moving forward,” Burton said. “If I felt it wasn’t, I wouldn’t leave.”

The changes are happening just as JFSJ is developing its widest influence yet.

Starting in 2010, Greer and JFSJ spearheaded an effort to get conspiracy theory-touting Fox News pundit Glenn Beck fired for his repeated invoking of the Holocaust and Nazis while describing the impact of President Barack Obama and those involved with the political left, including activist-philanthropist George Soros. Beck’s daily talk show on Fox ended on June 30.

Leaders of PJA-JFSJ, along with 167 other representatives of Jewish social justice groups, spent the day at the White House on July 29, as part of the Jewish Social Justice Roundtable meeting with senior members of the Obama administration.

“It’s never happened that 20 Jewish organizations came to spend a day at the White House and the topic wasn’t Israel,” Greer told The Forward. “There’s this perception that you only have to deal with the Jewish community on Israel, and this kind of set the record straight.”

The Roundtable was started by the Cummings Foundation in 2009 to bring together representatives of 20 aligned Jewish social justice advocacy groups. Along with PJA and JFSJ, other groups at the roundtable include the American Jewish World Service, Mazon, Repair the World, and the Reform and Conservative movements.

At the meeting issues including preserving the social security safety net and immigration reform were discussed, said some who attended.

Barrett said the meeting made clear to the president’s senior staff that “standing by social and economic justice policies is a priority for the Jewish social justice movement.”