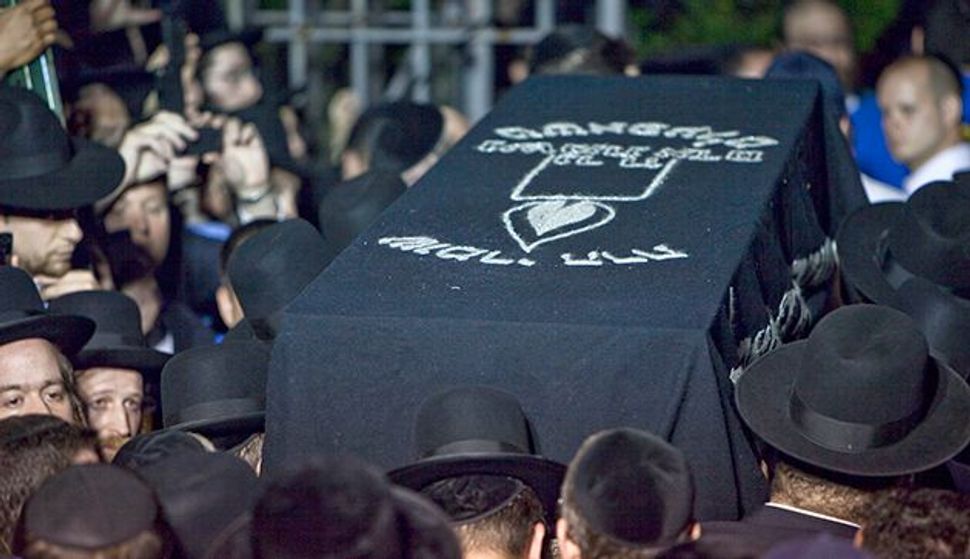 Tough Lessons: Jewish groups are focusing on child safety following the murder of Leiby Kletzky, whose funeral was held on July 13. Image by Getty Images

A number of child-safety proposals have been floated in the wake of the murder of 8-year-old Leiby Kletzky in Brooklyn’s Boro Park neighborhood.

One proposal might stand out to New York State residents as a commonsense initiative: mandatory background checks and fingerprinting for private school employees.

The checks would not have prevented the murder of Kletzky. Accused killer Levi Aron, also a Jew from Boro Park, abducted the boy off the street in July as the child walked home from a neighborhood summer camp. But advocates contend that such regulation would codify one lesson of the murder: that Orthodox communities can no longer place blind trust in their own.

“The point that we bring to the table is that we Jews can’t do it ourselves,” said Elliot Pasik, president of the Jewish Board of Advocates for Children. “We can’t self-govern. We can’t police ourselves. We need laws for child safety.”

Only one Jewish private school out of hundreds in the state has opted into a program to fingerprint prospective employees, state records show.

Pasik’s organization has set forth a legislative agenda to apply public school safety measures to yeshivas and, by extension, to all private schools in New York State. In addition to mandatory fingerprint testing and criminal background checks for all religious school employees, Pasik has called for laws that would force private school officials to report in-school abuse to secular authorities and to register teachers with the State Education Department. Pasik’s plan would also force them to create school safety plans and to place defibrillators in each institution, among other mandates.

“The religious school world is a legal no-man’s-land,” Pasik said. “The child protection laws that we are proposing are totally neutral. They don’t affect the religion clause of the First Amendment. They are as neutral as a building code or clean bathrooms or anything else.”

Even so, Pasik and other child advocates have not yet brought these proposals to pass. Pasik’s most recent call for legislation, — which he sent to six New York State senators and Assembly members, including Senate Majority Leader Dean Skelos and Assembly Speaker Sheldon Silver, in the wake of the Kletzky murder — is only the latest act in a decadelong crusade to regulate Jewish private schools.

In 2000, the New York State Assembly passed the Safe Schools Against Violence in Education Act, known as Project Save. Partially a response to the Columbine High School massacre, which had occurred the previous year, Project Save put into place a series of regulations to protect students and teachers. It also mandated background checks and fingerprinting for new public school employees, and forced teachers and school officials to report any abuse that they suspect is taking place on school grounds.

According to Pasik, religious organizations successfully fought to exempt private schools from the law.

In a telephone interview with the Forward, Rabbi David Zwiebel, executive vice president of the Orthodox umbrella organization Agudath Israel of America, said that he did not recall whether his group weighed in on the bill at the time.

“We might have said — not necessarily to the legislature — that we appreciate when the state allows us to do things voluntarily rather than forces us to do something,” Zwiebel said.

In 2006, Agudath Israel voiced its support for a bill passed by the legislature that allowed — but did not order — religious schools to opt into the state’s fingerprinting program.

The organization took no official position on a subsequent proposal that would have made fingerprinting mandatory for private schools. This bill, which was sponsored by Assemblyman Harvey Weisenberg, a Democrat from Long Beach, and Assemblyman Dov Hikind, a Democrat serving Boro Park, among other lawmakers, failed to pass the legislature in 2009.

Last year, Pasik filed a Freedom of Information request with the State Education Department, and found that just 17 private schools — out of a total of about 1,900 — enrolled in the fingerprint program. Only one school on the list was a Jewish private school: the North Shore Hebrew Academy High School.

This came as no surprise to Ben Hirsch, president of Survivors for Justice, a child-safety advocacy organization and support group for victims of abuse in the Orthodox community.

“For decades, our community’s leadership has been protecting pedophiles,” Hirsch said. “This is going to sound shocking, but the safest place for a sex offender to reside is within the Hasidic and strictly Orthodox community, employed as a teacher.”

Though Orthodox communities are finally showing signs of confronting the issue of abuse, Jewish education groups reject the notion that yeshivas are soft targets for pedophiles.

“We are aware of abuse. It is a serious issue not just for the Jewish communities, but for all communities” said Rabbi Martin Schloss of the Jewish Education Project, which advocates on behalf of 370 Jewish private schools. “We are working with organizations that teach children about appropriate and inappropriate touch, and we consider our teachers the frontline defense systems for picking up signs of abuse.”

Even so, Hikind said it is high time that the mandatory fingerprint law, which he plans to sponsor again next year, is passed. The Kletzky murder, he suspects, might even propel the community of Boro Park and the broader Hasidic leadership to back him this time.

Zwiebel, for his part, said that Agudath Israel is going to take a wait-and-see approach. “I am pretty sure we will not oppose it and we will discuss internally as to whether we will affirmatively encourage it,” he said.