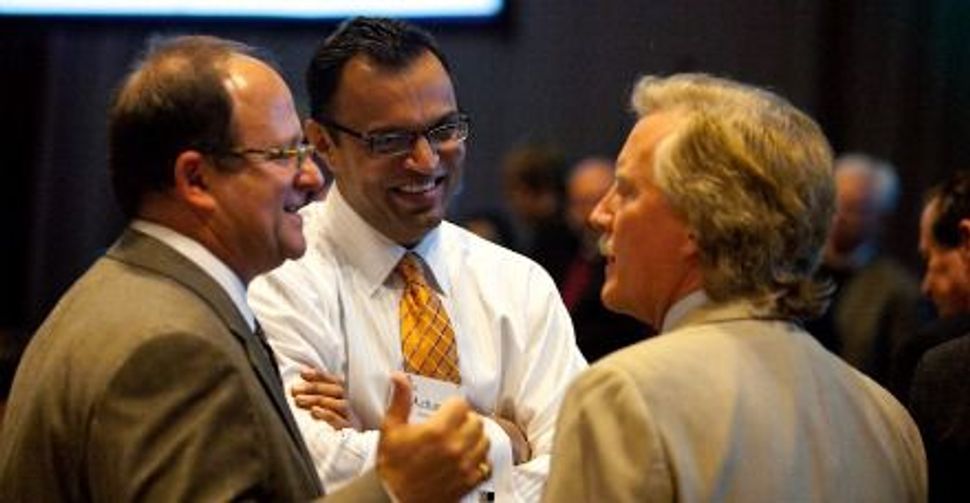 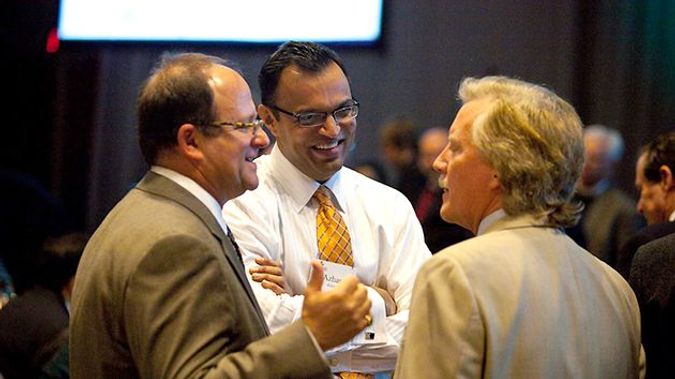 Deep in America’s heartland, a Reform synagogue, a nondenominational mosque and an Episcopalian church are all putting down roots on a 37-acre tract of land that once belonged to a Jewish country club. A body of water called Hell Creek runs through the development, over which the faith groups plan to build “Heaven’s Bridge.”

Fantastical as it sounds, this interfaith campus is currently in the works in Omaha, Neb. Slated for completion in 2014, the Tri-Faith Initiative is an experiment in religious coexistence in a city better known as a hub of corn-fed conservatism.

“The only other place where such a thing exists is Jerusalem,” said Dr. Syed Mohiuddin, chairman of the Creighton University School of Medicine. Mohiuddin’s organization, the American Institute of Islamic Studies and Culture, is building a mosque on the campus. “Jerusalem is so important to these three faiths. We are sort of reproducing that model.”

If the experiment works, the city of Omaha — with a metropolitan area population of about 900,000, including 5,500 Jews, 6,000 Muslims and 4,500 Episcopalians — will become a beacon of cooperation in a world of interreligious strife. But before that can happen, the three groups still need to navigate fears, stereotypes and bureaucratic hang-ups.

The story of the Tri-Faith Initiative began with a simple quest for a parking lot. Temple Israel, the largest synagogue in Omaha, is located in the city’s congested downtown district. On the High Holy Days, the Reform congregation borrows parking space from its two neighbors, the Omaha Community Playhouse and the First United Methodist Church. When Temple Israel’s leaders decided to relocate the congregation to West Omaha, where many of the synagogue’s members now live, they reached out to Mohiuddin, who was planning a nondenominational mosque in the same neighborhood.

“It wasn’t a directive from the rabbi to say, ‘Go get with this group of Muslims,’” said Jon Meyers, a board member at Temple Israel. “Having said that, we realized: ‘Hey, this is a really cool thing. Why don’t we look at exploring this?’”

After an unsuccessful bid to the Catholic Church in Omaha, the two groups found a willing third partner in the Episcopal Diocese of Nebraska. In 2006, they drafted a Memorandum of Understanding, committing to a shared campus with an additional interfaith building, for which they formed a separate 501(c)(3) called the Tri-Faith Initiative. Each faith group is responsible for purchasing its own parcel of land and building its own facility. The Tri-Faith Initiative will construct the fourth building.

“It’s been a remarkable journey,” said Nancy Kirk, executive director of the Tri-Faith Initiative. “I am so impressed by the relationships that have been built and the level of trust.”

This year, after an arduous five years scouting for land, the groups finally settled on the 37-acre property in West Omaha. The tract is part of a larger mixed-use development called Sterling Ridge, the former site of the Highland Country Club golf course built for Jews who were once disallowed from the city’s mainstream golf clubs. All three faith groups, plus the Tri-Faith Initiative, are under contract with Sterling Ridge’s developer for their respective land purchases. Temple Israel, which has raised money for both the land and the synagogue, will likely break ground first, opening a new facility in 2013.

“Our challenge is to pick up and move an entire congregation without making any of our decisions divisive,” Meyer said. “Our decision to move to the new Sterling Ridge site was extremely well accepted.”

Still, Meyer said, some members of Temple Israel have expressed concerns that the campus might be a target of Muslim terrorism, or that the AIISC’S mosque itself could give rise to a “terrorist cell.”

“Some people have a concern that our proximity to the mosque and the fact that we would be in a neighborhood and in an initiative together would by association put us in jeopardy,” he said. “Pick a percentage, whatever percentage of the United States has that feeling [of fear of Muslims], and I am sure that there is something equal to that among our congregation.”

In order to allay these fears, Temple Israel’s leaders reached out to Alan Potash, director of Omaha’s Anti-Defamation League, and to a federal law-enforcement official, both of whom assured them that they were not putting the congregation at risk by moving to the new location.

“You have to be realistic about it,” Meyers said. “Everyone has to be in charge of their own safety. It is not like it is going to be a walled or gated community. This is still Omaha.”

When asked how he felt knowing that members of the Jewish community harbored fears of Muslim extremism, Mohiuddin said that his community shared the same concerns. “I don’t personally take offense, because I recognize that a small, tiny minority of Muslims have caused people to fear, and the press in the United States has not helped,” he said. “We think the best way to combat that is to let people get to know us and not be afraid.”

For both the Muslims and the Episcopalians, constructing facilities at the Tri-Faith campus will entail building congregations from the ground up. While the Rev. Ernesto Medina said that there are plenty of Episcopalians to fill the pews in a West Omaha church, this task could prove particularly challenging for the AIISC, a new not-for-profit devoted to countering the image of violent Islam in American society. “Not many people know about the organization,” said Fa’iz Rab, the spokesman for the Islamic Center of Omaha, the city’s largest mosque.

“From the very beginning, we have made an intense effort to keep the Muslim community informed of what this organization is about and to make it a success,” said Mohiuddin, who added that outreach efforts will ramp up once the mosque is built. “Current facilities in Omaha are not big enough or sufficient enough to do all we want to do.”

The Tri-Faith Campus has also stirred up a concern that cuts across faith lines: the prospect that coexistence could lead to romantic commingling, and even intermarriage, among Jews, Muslims and Christians. Some Muslims, Mohiuddin said, also wonder if the Tri-Faith campus could give rise to a fourth religion, one that incorporates elements of Judaism, Islam and Christianity.

“We believe — and this has been our experience — that understanding other faiths actually makes your own faith stronger,” Mohiuddin said he tells his doubters. “I am a better Muslim and have a much better understanding of Islam. And the other faiths have the exact same impression. Their own beliefs have become stronger because they understand the religion better.”

Though Meyer, Mohiuddin and Medina have had to work to win over their respective constituents, each one speaks of a deep commitment to his partners in the Tri-Faith Initiative. The lengthy search for a West Omaha location for the campus turned out to be a blessing in disguise, providing the faith leaders with ample time to get to know one another and their respective communities.

In 2009, the three groups hosted an event called Dinner in Abraham’s Tent, an hour-long panel discussion with national religious leaders from the three faiths at Omaha’s Qwest Center. More than 1,000 people attended. In April, the Tri-Faith Initiative sponsored a Passover Seder at St. Martha’s Episcopal Church, where Medina is the rector.

“We had to start really late because people kept coming,” Medina said. “We ate really well, and we sang and we experienced something with integrity. If fear was a factor, we would not have known it.”

But there also have been moments of tension, such as when the Jewish Federation of Omaha’s newspaper, the Jewish Press, publicized the fact that Naser Z. Alsharif, an American of Palestinian descent who serves on the Tri-Faith board, signed on to a boycott of Israeli academic and cultural institutions. In the Jewish Press article, Temple Israel’s senior rabbi, Aryeh Azriel, an Israeli, said that he would continue sitting on the board with Alsharif, even though the revelation “pain[ed]” him.

“We have decided at this point that the AIISC and the Tri-Faith Initiative, or, for that matter, the temple or the diocese, have no political positions and if the individuals want to express their political views, that is their own purview,” Mohiuddin said.

The topic of Israel also came up at the group’s January 2009 board meeting after Operation Cast Lead in Gaza. Kirk said that she approached the meeting with dread, wondering if the entire project would implode. But what might have rent asunder a weaker group actually strengthened the bonds between the members of the Tri-Faith Initiative.

“Dr. Mohiuddin came into the meeting, and he said, ‘My people are in great pain.’ Immediately, that allowed everyone else to share that sense of pain,” Kirk said. “You know, there was no, ‘You’re wrong, we’re right.’ It wasn’t about that. It was about the shared humanity.”