Israeli Protests Galvanize the Public. But for What Goal? 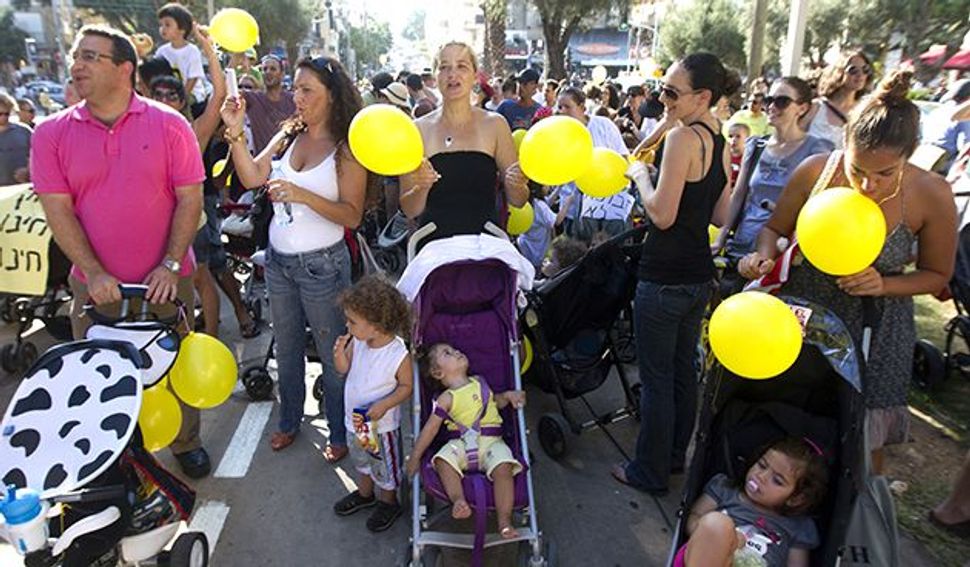 Stroller March: At a July 28 demonstration, parents in Tel Aviv protest against the high cost of living. Image by Getty Images

The masses marching down the streets on the muggy night of July 30 were a mixed crowd. There were students from the “tent city” set up on Tel Aviv’s Rothschild Boulevard to protest high housing costs. Then came young couples who joined the march pushing strollers or carrying toddlers on their shoulders, crying out against a government that had left them struggling to make a living.

Despite the varying backgrounds, the 150,000 protesters participating in what is now seen as Israel’s biggest social protest in decades share a common thread: They are all part of Israel’s middle class, a sector now raising its head after being ignored for decades by successive Israeli governments.

The large show of force, coupled with local protests across the country, marked the transition of Israel’s 3-week-old social protest from a matter of curiosity to a real force capable of dominating the nation’s agenda. This transition has brought the protest movement to a crossroads, even though it has no official leader, no institutional backing and no formal name.

It has asserted its power. Now the movement is expected to deliver, and it is not at all clear whether this avowedly post-partisan outpouring will translate into genuine political change.

On August 2, after being criticized by the otherwise friendly media for not articulating its agenda, the protest movement came up with an initial list of demands. It included a call for lowering the Value Added Tax, for investing tax revenue surplus in programs benefiting the citizens, increasing housing assistance, providing free education from the age of three-months and increasing medical staff in hospitals.

“We love Israel, and all we want is to build a better society, a society that will be more just,” said Itzik Shmuli, one of the protest organizers, as he presented the joint list of demands.

The manifest provided a first glimpse into the movement’s ideology and could easily be viewed as leaning toward a European social democratic model. But in fact, it still comfortably accommodates a broad array of angry Israelis, from right to left. This emerging ideology, while aiming to repair Israel’s torn social network and to pull the country back to the social vision of its founding fathers, is far from revolutionary. Its focus remains on concerns of the middle class, which is made up of Jewish, secular, educated, urban families.

This limited vision has its detractors. “It is the hypocrisy of people who limit the discussion to costs and benefits but don’t ask the real questions about the entire value system that has taken over the Israeli society,” Oz Almog, a sociologist at Haifa University, wrote in his blog.

Social frustration became apparent when Israelis first took action earlier this summer against the rising prices of cottage cheese, a favorite Israeli staple. Then came the housing demonstrations, as well as a nationwide doctors’ strike, several marches by area mothers and a widespread student protest.

All this revealed the bleak reality of Israel’s middle class. It is a generation raised on the promise that good education and hard work would move them closer to a local version of the American dream: a home of their own, a decent lifestyle, savings for the future.

Israel’s booming economy and its relatively low unemployment rates gave these hopes a boost. But years of privatization and growing influence of the few economic tycoons had an opposite effect. The social safety net became insufficient, and middle-class aspirations went unmet.

Notably absent from the protest movement are the truly disenfranchised members of the Israeli society: the Israeli Arabs who populate the lower socioeconomic strata, the ultra-Orthodox living in poverty, the unemployed and immigrant laborers living on the sidelines of Israeli cities. A yarmulke is a rare sighting in the tent cities, and Arabic is not heard in demonstrations.

The movement’s homogenous nature has made it susceptible to criticism from government circles attempting to tar protesters as spoiled lefties whose sole purpose is to bring down the Likud party government led by Prime Minister Benjamin Netanyahu. A Likud official was quoted as saying in a closed-door party consultation that protesters huddling in the tent city are no more than “sushi-eating, hookah-smoking” students.

Aware of this potential vulnerability, protesters tried to highlight a more inclusive impression. They hosted visits by settlers’ leaders and reached out to neighborhood organizers who have been working for years on behalf of Israel’s poor, many of whom come from a Sephardic background.

The protesters’ insistence on remaining above party politics is what has made them so unique in the Israeli partisan landscape. Israel lacks a tradition of massive social demonstrations. The most notable protests were all over issues of war and peace: the protest against Golda Meir’s government following the traumatic 1973 war; the 400,000-strong demonstration after the massacre in the Lebanese refugee camps of Sabra and Shatila, and the public outcry in the days following the assassination of Yitzhak Rabin.

Marching on July 30 in central Tel Aviv, protesters passed by a huge sign portraying Netanyahu smoking a cigar. Below was a two-word slogan: “You’re Fired.” But only few adopted this message, and while “Bibi, go home” chants were heard in the crowd, for the most part, organizers and protesters steered clear of adding any specific political flavor to their protest.

This strategy proved to be tricky, as protesters struggled to maintain their big tent policy and to fend off claims that they are no more than a veiled left-wing anti-Likud movement.

A small tent city in Ariel, one of Israel’s largest Jewish settlements in the West Bank, attracted much media attention. One of the activists there told reporters that he was more afraid of his bank manager than of Hezbollah leader Hassan Nasrallah. The movement has deliberately avoided making an overt linkage, seen by some as obvious, between government spending on settlements and the lack of social spending for Israelis.

The problem with translating the protest into political change, political commentator Yaron Deckel said, is the failure of opposition parties to harness the movement.

“None of the parties has been successful in riding this wave,” said Deckel, who hosts a popular daytime radio show. “After all, what difference is there between Kadima and Likud when it comes to social issues?”

And if a political leader or party is to harness this, it will have to connect with someone like Dorit Shimoni, 44, a Jerusalemite who explained the reasons for this outburst by stating, “People just reached a point where they cannot continue anymore.”

Shimoni was among the organizers of a local protest against the hike in costs of the day care that her daughter attends. An academic earning an average salary from a government agency, she noted that continuous increases in costs of living have eroded the middle class’s ability to make ends meet. In turn, their trust in Israeli leadership has diminished.

“You get the feeling that everyone is cheating you,” Shimoni said. “It doesn’t make sense that the government has money for everything it needs, but no money to help its citizens.”

Israeli Protests Galvanize the Public. But for What Goal?