Dems Wonder What Happened to Their Good Jewish Boy 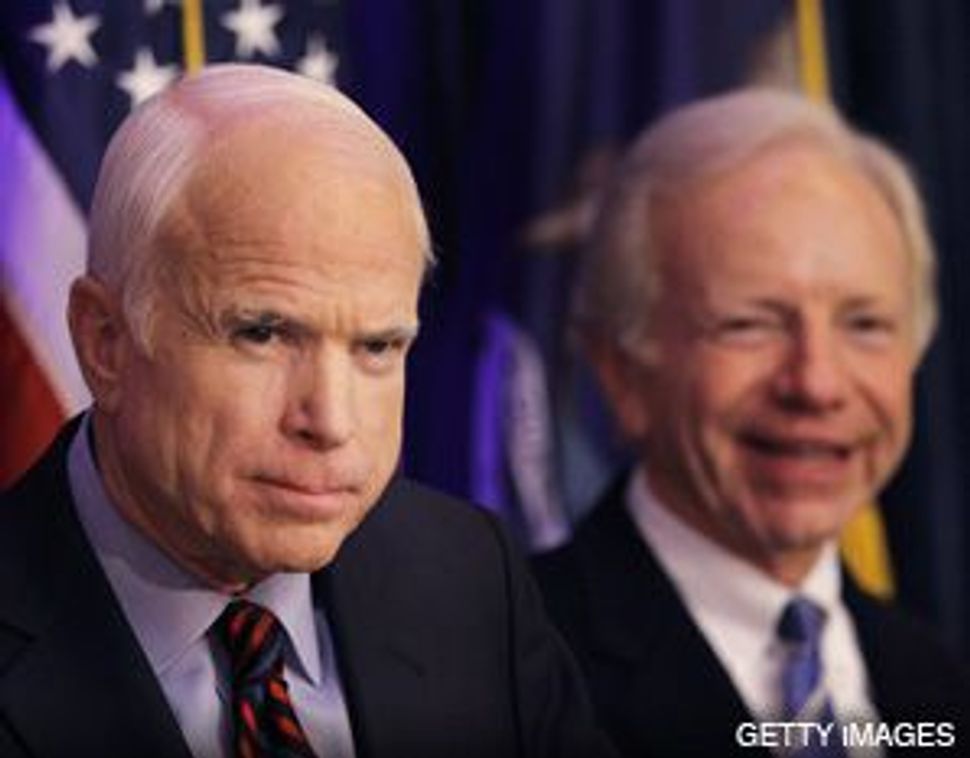 JOHN AND JOE: Senators McCain and Lieberman appeared together at an August 13 press conference.

Denver — Jewish voters had much to be proud of in 2000. So did the state of Connecticut. The state’s senator, Joe Lieberman, the first American Jew nominated to a major political party’s presidential ticket, stood up at Los Angeles’s Staples Center and spoke of a “new frontier” in American politics. 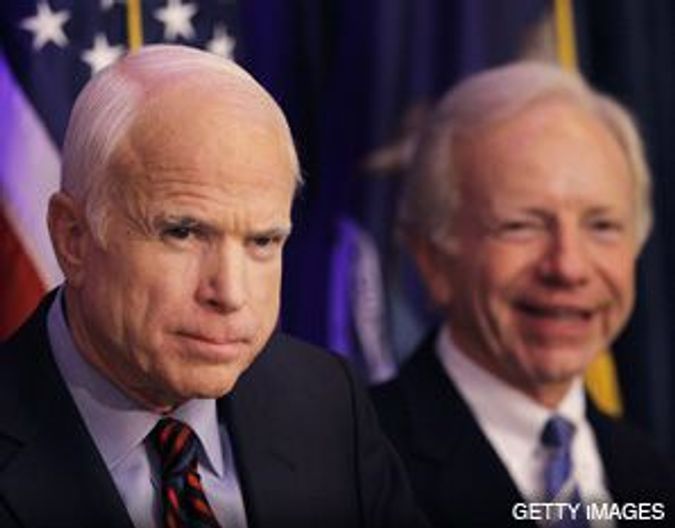 JOHN AND JOE: Senators McCain and Lieberman appeared together at an August 13 press conference.

“We had front-row seats,” recalled Connecticut Democratic Party chairwoman Nancy DiNardo, whose delegates were invited to visit the set of the now defunct NBC television show “The West Wing” and hang out with Lieberman backstage after the Connecticut senator gave his convention speech.

“It was a fun time,” agreed Ira Forman, executive director of the National Jewish Democratic Council. There were Gore-Lieberman signs in Hebrew, yarmulkes and campaign buttons that incorporated a Jewish star into the logo.

The Connecticut senator remains a force in Jewish and national politics, and perhaps a deciding factor in the outcome of this year’s presidential election, particularly if soon-to-be Republican nominee John McCain should choose him as his running mate. But for many Jews, the euphoria of eight years ago has been replaced with frustration and even anger by a political journey that has alienated the Democratic base and could make Lieberman this year’s Zell Miller, the former Democratic senator from Georgia whose vocal criticism of John Kerry in 2004 made him a GOP poster boy and a featured speaker at that year’s Republican convention.

As Democrats converged on this sprawling city, Lieberman was vacationing far away and preparing for another moment in the convention spotlight: as a featured speaker during the opening night program of the Republican National Convention in St. Paul, Minn. Lieberman’s journey from one-time Democratic vice presidential candidate to one of the most staunch supporters of McCain’s White House bid has made him a pariah in Democratic circles and a key McCain surrogate reaching out to Jews, Independents and moderate voters.

“When I see what Joe Lieberman is doing, I feel let down, I feel like I got kicked in the stomach,” said Florida Rep. Debbie Wasserman Schultz at a reception for Jewish members of Congress, hosted by the NJDC on Sunday, August 24, at the Golda Meir House.

Yet Lieberman remains a popular figure among many Jewish voters, which serves only to further vex Democratic leaders frustrated by what they say is Lieberman’s fueling of misinformation over Obama’s support for Israel, the Iraq War and foreign policy matters, including how he would confront the Iranian threat.

While Lieberman’s appeal is greatest in the Orthodox community, support for the senator runs the political and religious spectrum. Democrat Steven Geller, the Florida Senate minority leader, for example, noted that upward of 600 people showed up at his liberal reform synagogue in South Florida recently to hear Lieberman speak.

Lieberman has drawn on that popularity during a series of recent town hall meetings, and through visits to synagogues and other venues in such battleground states as Ohio, Pennsylvania and Florida to deliver the message to Democrats and Independents that McCain is the only leader who can break the partisan gridlock in Washington.

Democrats such as New York Senator Charles Schumer say they can respect Lieberman’s decision to support McCain, a friend. They are less accepting of Lieberman’s recent remarks that Obama is willing to lose the Iraq War to win an election.

“Nobody faults him for his beliefs on Iraq, but it’s when Joe goes out of the way to criticize Obama and Democrats that people take umbrage,” Schumer said.

That is certainly not helping Democrats build support for Obama within the Jewish community, where the Illinois senator’s supporters say they are facing hostile audiences, primarily among older residents who live in condominium communities, and the more religiously conservative who have bought into Internet-spread rumors raising doubts about Obama’s support for Israel and into false reports that he is Muslim.

How great an impact Lieberman could have on the election is a source of much debate.

A June 29- July 3 poll conducted for J Street, a liberal pro-Israel lobbying group, found only 37% of 800 Jewish respondents had a favorable opinion of Lieberman. Now, two years after Lieberman was re-elected as an Independent following his loss of the Democratic primary to an anti-war political newcomer, his approval rating at home tanks the more he becomes outspoken on McCain’s behalf. Only 45% of Connecticut voters — a 7% drop since March — approved of his job performance in a late June Quinnipiac University poll that represented his lowest approval rating in the 14 years since the school began polling. Among Democrats, nearly two-thirds gave him low marks.

Other Democrats, such as Geller, say he remains popular among Jews. “We probably don’t have anybody of that stature that’s down touring,” he said. “If we could get Senator Obama, that would make a major change. Maybe Senator [Joseph] Biden, but I don’t even think Senator Biden has the same stature in the Jewish community that Senator Lieberman does.”

What is clear is that Democrats have to be nice to Lieberman, who caucuses with them — for now, anyway. They can’t risk alienating him, because his vote for majority leader could shift control of the Senate to the Republicans.

That could change in a few months if Democrats pick up enough seats to give them a sound Senate majority. While this looks increasingly likely, they still may have to hold their tongues if they don’t win a filibuster-proof 60-vote majority.

Dems Wonder What Happened to Their Good Jewish Boy