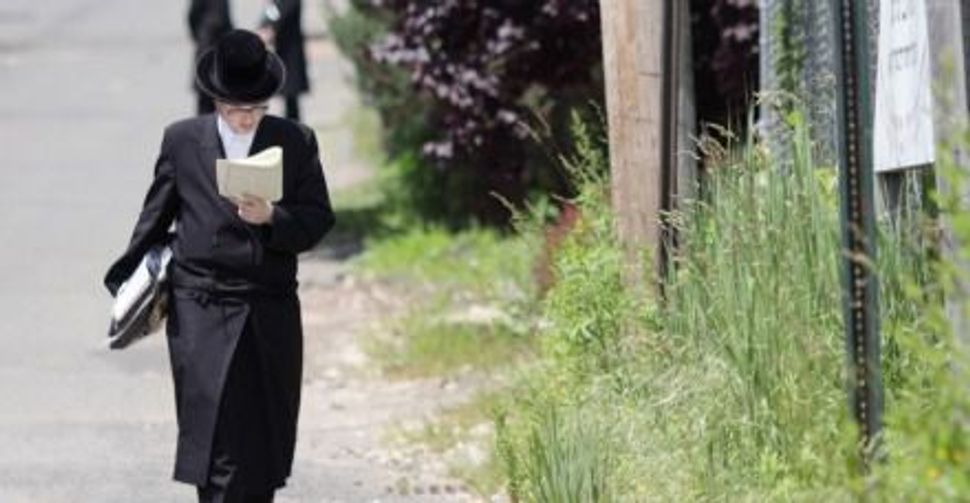 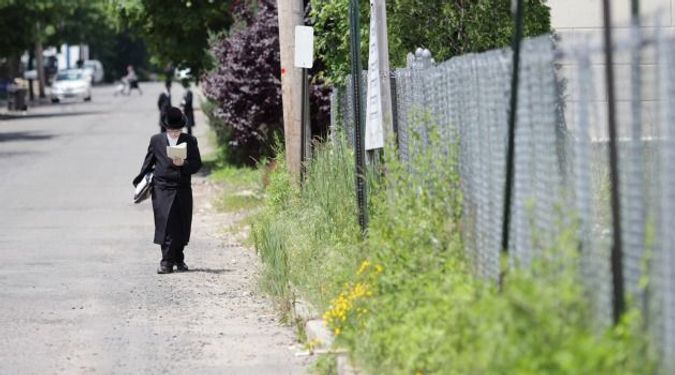 With some of the hottest days of summer still ahead, New Square, a Hasidic village of the Skverer sect in upstate New York, is a catastrophe waiting to happen, local fire officials say. It is a fear that they have faced each summer for many years. Most of the buildings in the village violate the municipal and state fire codes, they say, posing a serious threat to residents and volunteer firefighters there.

“At least 60% of the structures in New Square have serious code violations,” said Kim Weppler, who retired in April as chief of the fire department responsible for New Square. “It’s only a matter of time before someone gets killed.”

Fire officials say that while New Square began building to code several years ago, potentially deadly problems with previous construction remain unaddressed. State officials have not taken action, some local officials and residents say, because they do not want to lose the village’s bloc vote.

“New Square has a lot of power to deliver votes in elections,” said Joe Meyers, a legislator in Rockland County, where the village of New Square is located. “Officials who otherwise do their jobs fall down when it comes to New Square.”

The village of New Square is among the poorest and fastest-growing communities in the country, according to U.S. Census Bureau data. Between 2000 and 2010, its population grew to nearly 7,000, up from 5,000. Property is so scarce, residents of New Square say, that village leaders let young people buy homes in the village only if they are married and both partners have parents living there. At the same time, the average family income in New Square is just $20,000 a year, while the average household size is almost six people.

In an effort to use limited funds to meet the growing demand for housing and schools, local developers have sometimes cut corners when it comes to construction, say local dissidents and fire officials from the Moleston Fire District and the Hillcrest Fire Department, which partner to provide volunteer firefighting service to the village of New Square and to a handful of surrounding municipalities.

Many buildings are too close together, lack sprinkler systems and have unsafe or obstructed exits, fire officials say. Most important, they say, many homes are being used as businesses.

“We’ll go into a building and find a second family living in the attic and a factory running out of the basement,” said Chris Kear, a former chief of the Hillcrest Fire Department who is now its public information officer. “It’s incredibly dangerous for us and for them.”

New Square is not the only Hasidic community that has been charged with flouting codes over the years. The nearby hamlet of Monsey, N.Y., and the Satmar Hasidic sect in Brooklyn’s South Williamsburg both have histories of unsafe building practices. And in July, a dissident faction of the Satmar Hasidic community in the village of Kiryas Joel filed a lawsuit charging that the village “does not properly or seriously enforce its building code.” The lawsuit, which requests the dissolution of the village because “it is a theocracy,” includes allegations that it keeps poor building department records, does not file required annual building code reports and has a completely unqualified building inspector.

Attempts to reach representatives of Kiryas Joel, which has yet to respond to the suit, were unsuccessful.

Under normal circumstances, municipal officials would step in to enforce compliance with local and state safety codes. But Hasidic leaders, like their communities, are generally averse to secular influence and often indifferent to secular regulation, residents and observers of these communities say. This is particularly true in New Square, which was founded in 1954 as a Hasidic haven from secular influences.

“The Hasidic population doesn’t relate to civil codes or civil laws in a very serious way,” said Shulem Deen, a former resident of New Square whose family still lives in the village. “There’s a kind of resentment that they’re so much under the spotlight.”

When municipalities fail to enforce codes themselves, the state is supposed to step in. But state officials avoid crossing New Square because of its political clout, officials in New Square and Rockland County say.

“We’ve spoken to people in government agencies for years, said Rich Bihler, a longtime member of the Hillcrest Fire Department. “Nobody, including the mayor, wants to touch this.”

The key to New Square’s influence is its disciplined voting as a single bloc, local officials say. Election records show that nearly all of the village’s 2,000 votes have gone one way for years.

This discipline is enabled by the community’s obedience to its grand rabbi, David Twersky, according to residents and observers of New Square, and makes both local and state officials wary of challenging New Square’s leaders.

The village is also perceived to be part of the state’s broader Hasidic community. No one knows exactly how many Hasidic voters there are in New York State, but demographers estimate that the number is somewhere between 70,000 and 80,000 depending on the election —and it’s growing.

Perhaps because of this, even politicians seeking statewide and national office court New Square. In the midst of his intense presidential campaign in 2000, Al Gore, then vice president, paid a visit to the out-of-the-way enclave in February for a photo-op sit-down with Twersky. In August of that same year, then first lady Hillary Rodham Clinton stopped in at the height of her campaign for the U.S. Senate.

“It’s hard to find many communities in the country that vote as a real bloc,” said Steve Rabinowitz, a political consultant for such Democrats as Bill Clinton and Gore. “Politicians pay particular attention to a place like New Square, which is not only persuadable but persuadable in its entirety.”

Efforts to obtain comment from New Square Deputy Mayor Israel Spitzer, who usually speaks for the New Square community, were unsuccessful. But Hank Sheinkopf, a high-profile public relations consultant who has been hired by a group of New Square residents, rejects the idea that New Square has undue influence that its deploys to stave off enforcement of safety codes. “Where’s the evidence?” he said. “It’s opinion and it is unsubstantiated.”

Fire officials say that for as long as they can remember, they have been trying and mostly failing to get state officials to enforce the fire code in New Square. Their claims are supported by a trail of letters and meeting minutes going back more than 50 years.

At a meeting of the Moleston Fire District’s Board of Commissioners on January 4, 1960 — six years after a group of Eastern European Holocaust survivors founded the village — the fire district’s attorney “reported on poor fire safety conditions in [New Square] and was instructed to confer with the County Fire Coordinator as to the proper action to be taken,” according to minutes preserved from that long-ago meeting, obtained by the Forward.

More than four decades later, when state safety code enforcement official Roy Scott paid a rare visit to New Square in November 2003, he discovered that the village had not even adopted a state-approved fire code or filed for an exemption, as required by law.

“The violations in the Village of New Square are probably the worst example in our state’s history of noncompliance with state codes,” he said then in a letter to the commissioners of the fire district responsible for New Square.

Privately, Scott attributed New Square’s ability to ignore the law for so long to its political influence. According to minutes obtained by the Forward of a November 23, 2003, meeting with local politicians and fire officials hosted by the Moleston Fire District, after conducting his inspection, “Mr. Scott said he can go to any village or town in New York State to inspect structures, but he needs permission to go to New Square.”

The minutes related that “Mr. Scott said that Dorothy Harris, the Deputy Secretary of State, knows about the situation with the Village of New Square. New Square has made it known that it has connections with the Governor’s Office.”

Scott is now retired and could not be located for comment. Neither Harris, who was Scott’s boss, nor then governor Eliot Spitzer responded to repeated requests for comment regarding Scott’s assertion, as related in the official minutes.

On February 12, 2007, the Moleston Fire District commissioners petitioned the Town of Ramapo to remove the village of New Square from their jurisdiction. It was at least the second time they had done so. In the resolution, they stated that serving the village had become too dangerous because of “repeated instances of abuse and violence to volunteer firefighters at alarm scenes, and serious hazards to volunteer firefighters as a result of mixed industrial and residential uses involving the storage of hazardous materials.”

In a follow-up meeting at the Hillcrest Firehouse on March 29, 2007, officials described these and other fire code violations to town and state officials. Hillcrest Fire Chief Tim Wren said, “The buildings in New Square are death traps,” according to the minutes. Fire officials also mentioned that New Square residents were reporting fires to an unauthorized and untrained village fire brigade rather than to the Hillcrest Fire Department, an issue that became public in 2009.

At the March 2007 meeting, several members of the department complained that town, county and state authorities had not responded to their repeated requests for help over the years. Ramapo Town Supervisor Christopher St. Lawrence said that he, too, “fears that we are going to have a death there if things are not changed,” the meeting minutes reported. But he said he had limited authority in the situation.

Like Scott, St. Lawrence blamed Spitzer for his inability to get state authorities to enforce New Square’s compliance with state building codes. “There is no question that the second floor of the Governor’s Office pulled the plug on this,” he said, according to the March 2007 meeting minutes. He promised to speak to then attorney general Andrew Cuomo about empowering the Town of Ramapo to enforce changes in New Square. Neither St. Lawrence nor Cuomo returned several calls from the Forward seeking information on follow-up actions.

The 2007 meeting led to some improvements, including the appointment of Manny Carmona as the New Square building and fire inspector that year, fire officials say. Since then, new buildings have mostly been built to code, they say, but existing structures remain dangerously out of compliance and a threat to life. Politics, the officials say, continue to take precedence over safety.

“It’s not a matter of if, but when catastrophe is going to strike,” Weppler said. “And when it does, all this is going to come out in the papers.”