Newspaper Article Transforms Lives of Holocaust Survivors, Not Once But Twice 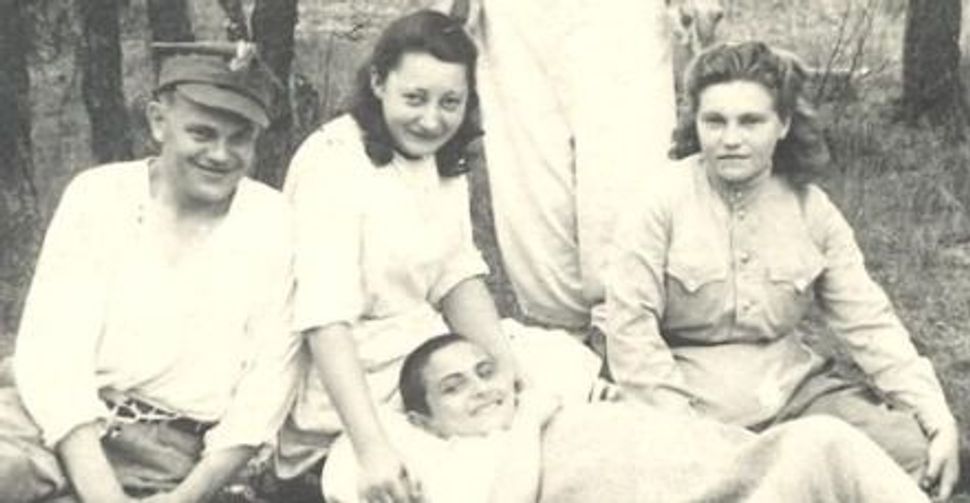 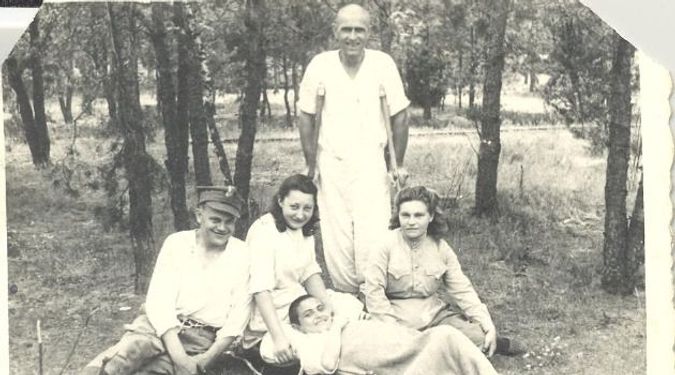 Aid at Last: Wacek Zalcberg, whose leg was broken during the Warsaw Uprising and healed abnormally while he was in hiding, underwent surgery at a Russian military hospital in 1945 in Otwock, Poland.

As an archivist at the YIVO Institute for Jewish Research, it’s not unusual for me to hear from people who, six decades after World War II, are still searching for information about their relatives.

I try to help, but most of the queries end up in dead ends. A recent request, however, turned out differently because of a single article in the Forverts that — not once, but twice — had an extraordinary impact on several lives. And in the latter case, I was one of those caught up in an amazing circle of fate.

The story begins with George Saltzberg of Toronto, who called me with an inquiry but had only the sketchiest of details. He was hoping to find a story about a Polish orphanage that had appeared shortly after World War II in a New York Yiddish newspaper. According to family lore, the article mentioned his father, a child Holocaust survivor, who was cared for after the war in the children’s home in Otwock, outside Warsaw. 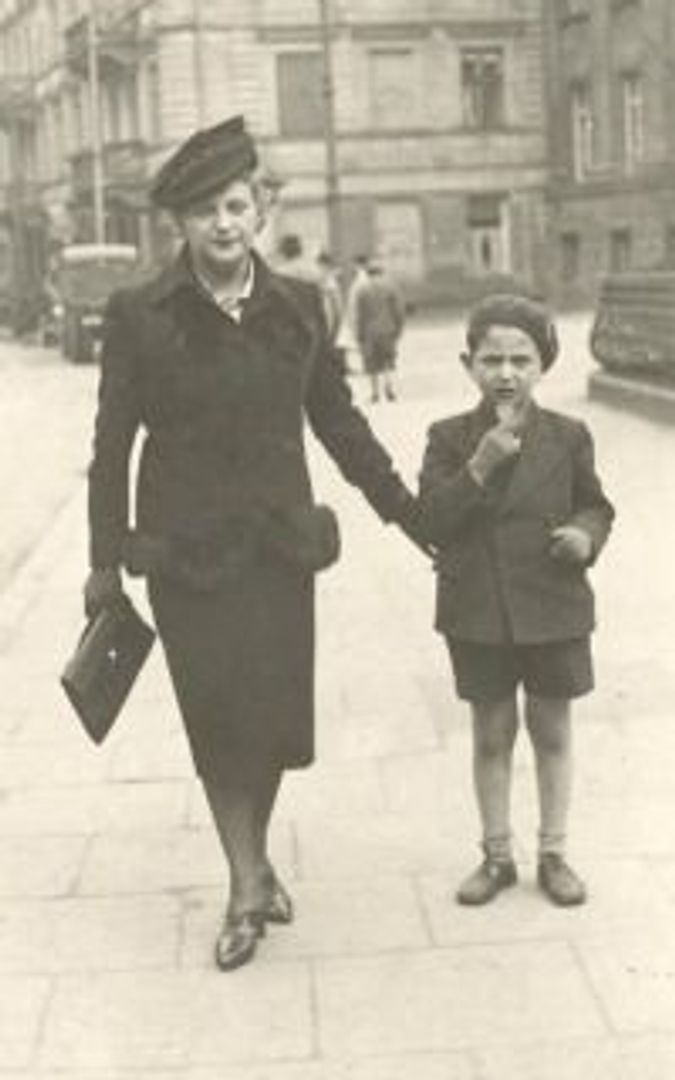 Before the Worst: Wacek Zalcberg (right) walks in Warsaw with his mother.

I was familiar with the Otwock orphanage, one of several children’s homes run by the Central Committee of Jews in Poland, because my grandmother, a Holocaust survivor herself, had worked there after her liberation in May 1945. And just by chance, a few months prior, I had run across an article in the Forverts, dated January 24, 1946, about children living there.

I remember spotting the piece and fixating on the headline staring back at me from the microfilm reader. It read: “Tsvishn di geratevete kinder in Otwock” or “Among the rescued children in Otwock.” I quickly began to search for my grandmother’s name, which at that time was Tola Pszenica. Even before finishing the article, I hit the print button. Instinctively, I felt that this article could be important — if not for me, then for someone else. I took the copy home, stuck it between the pages of a Yiddish book resting on my kitchen table and promptly forgot about it.

That is, until Saltzberg’s call in late May. I went home that night and took the article out of the book. Much to my delight, I saw that it included a segment on his father, born Wacek Zalcberg, who today goes by the name of Walter Saltzberg, and lives in Winnipeg, Canada. I promptly e-mailed George Saltzberg the good news, along with a brief summary of what the article said about his father. 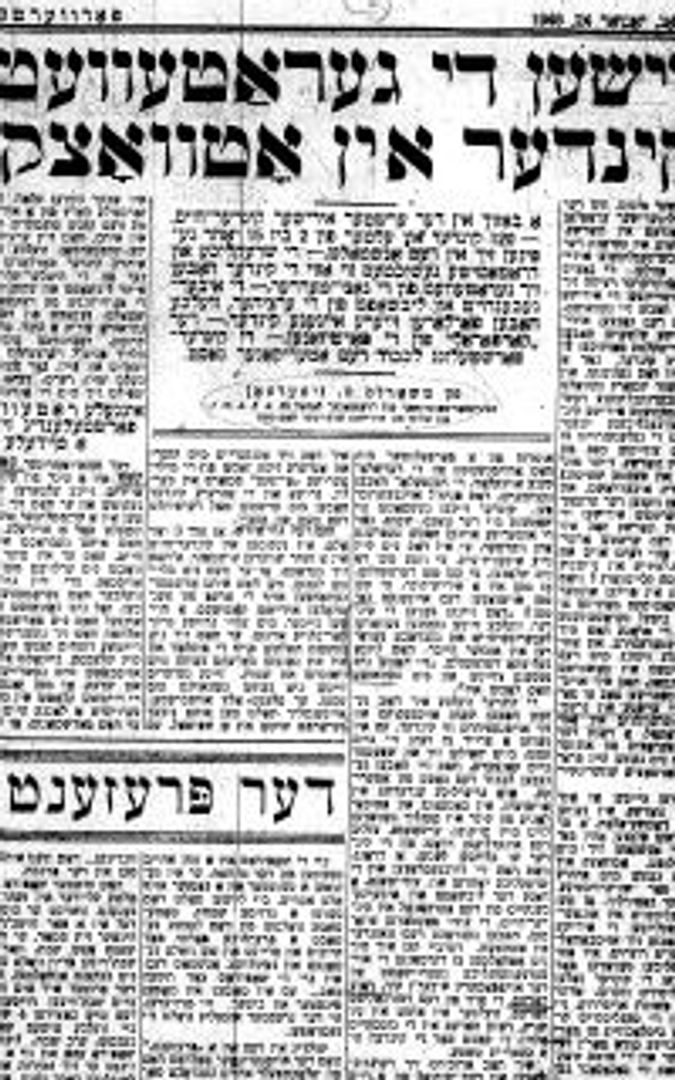 Power of Print: An article in the Forverts twice led to powerful connections.

I was jubilant about the discovery, and the next time I was at the YIVO office, I scanned the entire article and e-mailed it to George Saltzberg. Later that day, he called to express his gratitude. He told me that upon receiving the article, he had phoned his father to tell him about it, too. His father, who had been driving at the time, had had to pull over to the side of the road because he was so overcome with emotion, and so grateful to know that the article had been found.

It was not the first time that this newspaper story had had a big impact. Sixty five years earlier, it had played a pivotal role in Walter Saltzberg’s life, as I learned from several exchanges with George and his father.

Wacek Zalcberg was born into an upper- middle-class family in Warsaw in 1931. His family’s apartment was on Leszno Street, which nine years later fell within the borders of the Warsaw Ghetto. Wacek’s parents and his brother, Jerzyk, acquired papers that allowed them to work in a German factory. But Wacek was too young to work, and he spent his days in hiding. In the spring of 1942, a family friend and a member of the Polish underground, Dr. Kazimierz Weckowski, smuggled Wacek out of the ghetto and hid him in his apartment. Wacek was never to see his parents or brother again, and to this day, their exact fate remains a mystery.

Wacek remained hidden in the apartment for two years, but during the 1944 Warsaw Uprising, Weckowski’s apartment was bombed, prompting Wacek, then 13, to flee to a nearby building. There he found other Jews in hiding, including a young man 10 years his senior who went by the Polish pseudonym Piotr Jabłoński. Soon bombs hit this building, too, leaving only Wacek and Piotr as survivors. Wacek was buried up to his head in rubble and had suffered a badly cut and broken leg. Piotr dug him out, and from that moment on, the two were inseparable. Piotr led Wacek to a new hiding place and did his best to tend to the boy’s wounds. He also protected Wacek from the few other Jews who were concealed in this underground space, and who wanted to kill him rather than risk discovery from the boy’s involuntary cries of pain because of his broken leg.

Wacek and Piotr remained in the tight crawlspace until January 1945, subsisting on little more than some water and a bag of rotten onions found in the ruins of another building. Wacek finally got medical treatment for his leg in May 1945, nine months after being injured. By that time, his leg had healed abnormally and was badly twisted and shortened. When the war ended, Piotr placed Wacek in the care of the Otwock Jewish orphanage.

And this is where the Forverts article played its first pivotal role in the Saltzberg family story. The Yiddish newspaper article described in detail what had happened to Wacek when he was hiding in a “hole in the ground” just above a sewer, badly injured and shielded by Piotr. The story also said that Wacek, who was being cared for at the Otwock orphanage, was expected to go to Stockholm for a follow-up operation, with the help of the Swedish Red Cross.

Shortly after the Forverts article appeared, Meyer Shwartzapel, a friend of the Zalcberg family, was walking along a New York City street with a friend, who handed him a copy of the paper. Shwartzapel, who did not read the paper regularly, graciously accepted it. There, much to his astonishment, he spotted Wacek’s name in the article about the Otwock orphanage. Until then, he had assumed that the entire Zalcberg family had perished. Thanks to this new information, Shwartzapel quickly arranged for Wacek ­­— now Walter Saltzberg ­— to join distant relatives in Winnipeg in 1947.

Ultimately, Walter Saltzberg’s drive to learn, and overcome the hardships of his early life led him to marry, raise a family and become a well-respected civil engineer, specializing in bridges. He recently shared his thoughts with me by telephone: “For many survivors, the Holocaust ended up consuming them, but I did not want to let it consume me.” This is clearly the motto by which he has lived his entire life.

After surviving life in two ghettos and two concentration camps, Piotr Jabłoński — later Peter Jablonski — also moved to Canada, settling in Toronto in 1953. Before he died, on July 17 at age 90, he translated the Yiddish article into English for the Saltzberg father and son. His obituary in the Toronto Star noted that Peter, born in Lublin, Poland, lost his parents and a sister in the Holocaust. At the same time, “Peter’s selfless acts of kindness, generosity and bravery” the obituary said, “led him to save the lives of many during the war,” among them Walter Saltzberg. Over the years, Walter Saltzberg had made a yearly trip to Toronto to visit Jablonski, and George Saltzberg, and his partner, Tim, had helped care for Jablonski and his wife, Sabina.

As for me, I cannot help but marvel at what this simple inquiry and a set of unusual coincidences brought me: friendship and the warmth of family. As George Saltzberg has conveyed to me more than once, it is difficult to believe that we have known each other only a short time and have never met, and yet we have become “a virtual family.”

Although my grandmother — who passed away in 1999 — was not mentioned in the Forverts article, I cannot help but think that, in some small way, she played a role in this story. As I recently learned, Walter Saltzberg and my grandmother overlapped at the orphanage. I only wish that my grandmother were still alive, so that I could ask her more questions about her days spent tending to the young Holocaust survivors, and put her on the phone with Walter.

Newspaper Article Transforms Lives of Holocaust Survivors, Not Once But Twice