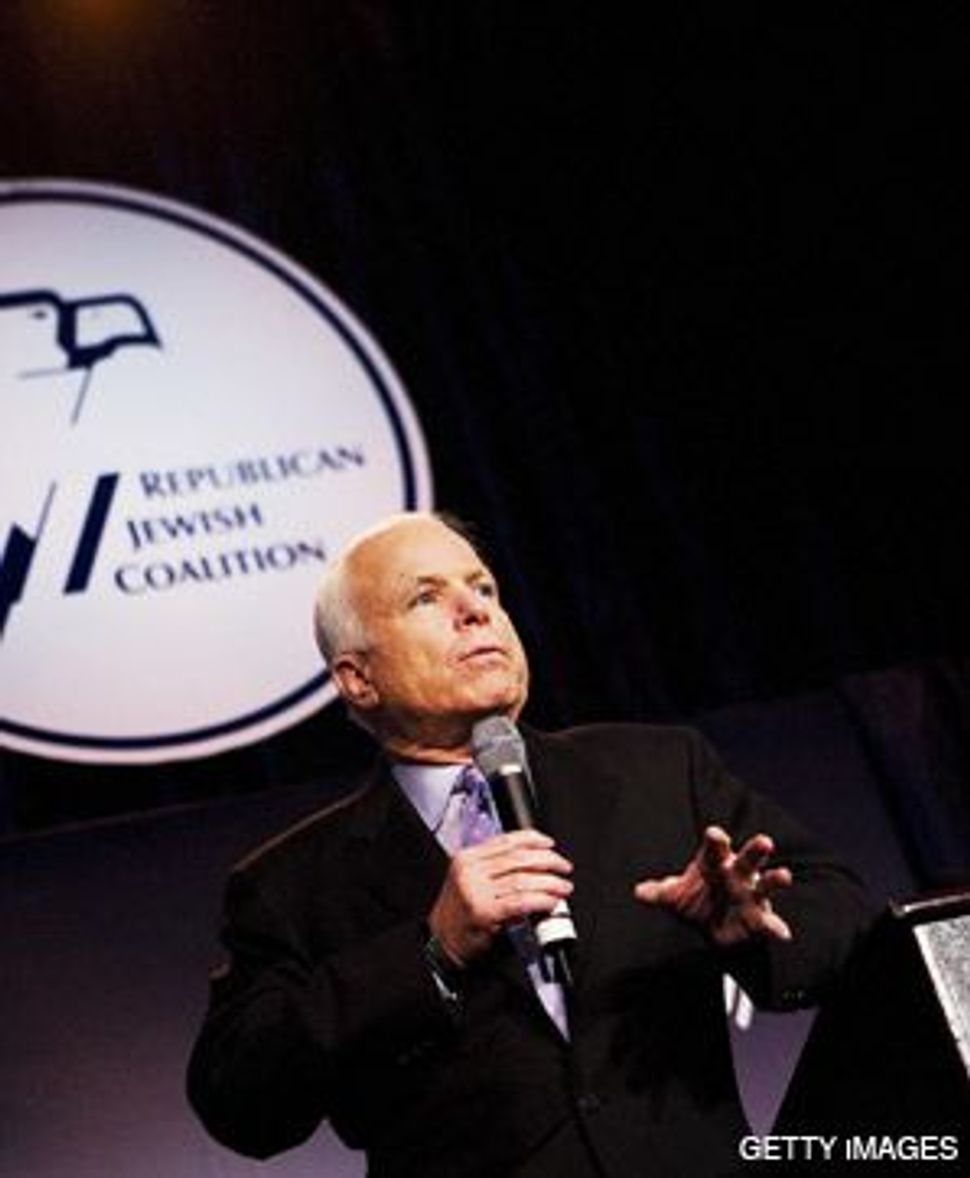 BUILDING THE BASE: Republican Jews hope that John McCain, shown above at an RJC event, can poll a record share of the Jewish vote.

Minneapolis – Long considered an oxymoron, Jewish Republicans, who represent 15% to 25% of Jewish voters, are suddenly feeling a little less lonely. 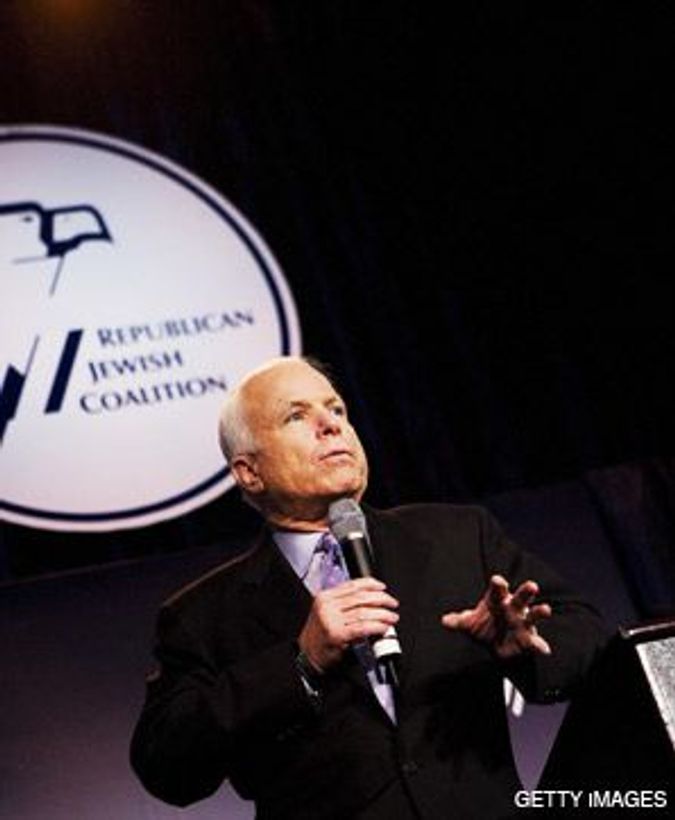 BUILDING THE BASE: Republican Jews hope that John McCain, shown above at an RJC event, can poll a record share of the Jewish vote.

More than 400 Republican Jews and their supporters packed a reception that the Republican Jewish Coalition hosted to salute governors at the Republican National Convention. The event also drew Sallai Meridor, Israel’s ambassador to the United States; state lawmakers, and major donors.

Some, however, say Brooks’s assessment may be a little too rosy.

“That’s just factually incorrect,” Democratic pollster Mark Mellman said of suggestions that the GOP share of the Jewish vote has been growing. “It’s a small minority of the Jewish community that votes Republican.”

In 2006, when Democrats rode a wave of frustration with President Bush and the Iraq War to regain control of Congress and win races across the country, Mellman noted that Democrats won 87% of the Jewish vote.

In 2004, Bush won 22% of the Jewish vote, while John Kerry garnered 78%, according to estimates from an analysis by Mellman and other pollsters that were compiled by the Solomon Project. The RJC cites other surveys that put the GOP share of the Jewish vote as high as 25% in 2004.

What is incontrovertible is the major effort that both parties are making to win over Jewish voters. The RJC’s chairman, David Flaum, was included in the line-up of speakers scheduled to address the GOP convention the night of September 4. Democrats included a record seven rabbis in their national convention program in Denver.

Since the 1930s, American Jews have overwhelmingly cast their support for Democrats in the range of 60% to 90%. The only recent exception to that was in 1980, when Jimmy Carter polled only 45% of the Jewish vote against Reagan in 1980 (with independent John Anderson pulling some 17% of Jewish votes).

The fact is, however, that both Mellman and Brooks may be right. The Republican share of the Jewish vote may not be growing as much as Brooks contends, but there are signs that the party’s numbers could grow and that Jewish voters may be more open to Republican positions this year than in recent history.

So who are Jewish Republicans?

“Republican Jews are all sizes, shapes, genders, ages, backgrounds,” said Cheryl Halpern, a former national chair of the Republican Jewish Coalition whom President Bush appointed to the board of the Corporation for Public Broadcasting in 2002.

“We are not single-issue people,” said Halpern, who hails from New Jersey and became chairwoman of the broadcasting corporation’s board in 2005.

But following the peak of the Democratic share of the Jewish vote in 2000, at close to 80%, Republicans have seen some incremental gains — thanks, in large part, to Orthodox and Russian Jews. Together these two groups may account for as many as 1 million of the estimated 6 million Jews living in the United States and represent the lion’s share of reliable Republican voters among Jews, according to pollsters, analysts and those who have studied the Jewish vote.

“Over time, there is hope in the Republican Party that this could become a significant voting block,” said Jonathan Sarna, a professor of American Jewish history at Brandeis University.

Orthodox Jews’ support for Republicans mirrors the greater support that the GOP has found among the more religious.

“What we are seeing is, there is a huge gap between the religious and the nonreligious,” Sarna said. “Orthodox voters, I think, are voting Republican for many of the same reasons evangelicals are: They just feel at home with them.”

According to the American Jewish Committee’s 2007 survey of national Jewish opinion, completed last November, 43% of American Jews consider themselves liberal, 31% describe themselves as moderate and 25% identify as conservative.

Only 15% described themselves as Republican, 58% as Democrats and 26% as Independents.

Compared with the general public, Jewish voters who were surveyed placed a greater emphasis on the importance of such issues as terrorism and the Iraq War, and a lesser emphasis on the economy. But since the AJCommittee poll was conducted in late 2007, overall public sentiment has shifted along with the economy, which now dominates most public-opinion surveys.

Republicans are encouraged this year by Obama’s support — in the 60% range, according to several polls — among Jewish voters, which places him in a position of low historical Jewish support for Democratic candidates. Democrats say it’s early and predict that Obama’s numbers will return to the normal range of Jewish support. But Republican John McCain’s popularity with some Jewish voters, questions about Obama’s foreign policy and his positions on Iran, and discredited Internet rumors that suggest Obama is Muslim have softened his support, according to Republican and Democratic Jewish leaders and pollsters.

Lending credence to Republicans’ optimism about growing their Jewish support is that Orthodox and Russian Jews’ top concerns — Israel, foreign policy and national security — are issues with which the GOP has historically found more support among voters of all faiths.

While Orthodox Jews tend to have larger families than less observant Jews and represent the fastest- growing segment of the American Jewish community, many family members are too young to vote. Many Russian Jews, who often oppose “anything that smacks to them of socialism or things that remind them of the USSR,” are more inclined to support a candidate such as McCain, but often these people are not citizens and therefore are ineligible to vote, Sarna notes.

According to political analyst Stuart Rothenberg, Jewish voters, of course, are not monolithic.

“Jews are like everybody else,” he said. “There are some who have a conservative temperament to government and finance and foreign policy and even cultural issues. But there are also more who are liberal.”

The RJC is a lobbying group that many Jewish Republicans credit for their growing ranks. Its leadership has enjoyed a seat at the table with top GOP leaders, including President Bush, and the RJC has become an influential fundraising and organizing entity.

Founded as the National Jewish Coalition by Jewish leaders with ties to the Reagan administration as a way to gain a singular voice, the RJC has grown into a force that greatly exceeds the number of its members and the influence of its rival, the National Jewish Democratic Council.

“For the most part, when Republican Jews are engaged, they are wearing an RJC hat or a Jewish yarmulke,” one Jewish leader said. “It’s just not that way with the NJDC, because there are so many more avenues for Democrats…. It’s so much more diffuse.”

That concentration of power, fundraising and organizing ability is what drew a large number of non-Jewish governors, including those from states with small Jewish populations, to the recent reception.