Israel and Syria Keep Talking Indirectly, Now With Paris at the Helm 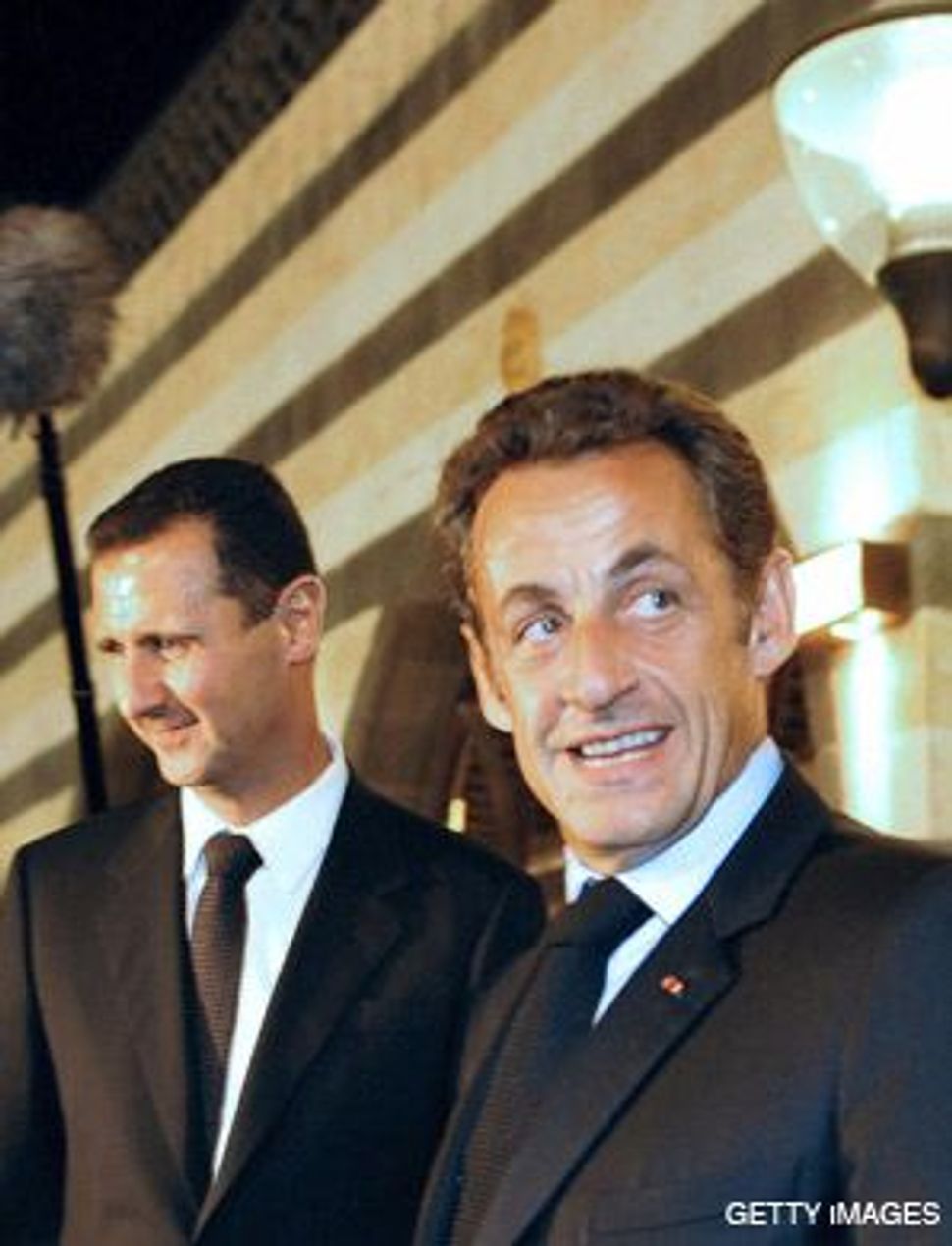 LOOKING FOR PROGRESS: French President Nicolas Sarkozy, above, recently traveled to Damascus in the hopes of pushing forward the latest round of peace talks between Israel and Syria.

Earlier this month, French President Nicolas Sarkozy became the first Western head of state in at least three years to visit Damascus, a symbolically significant step in Syria’s reintegration into the international community. 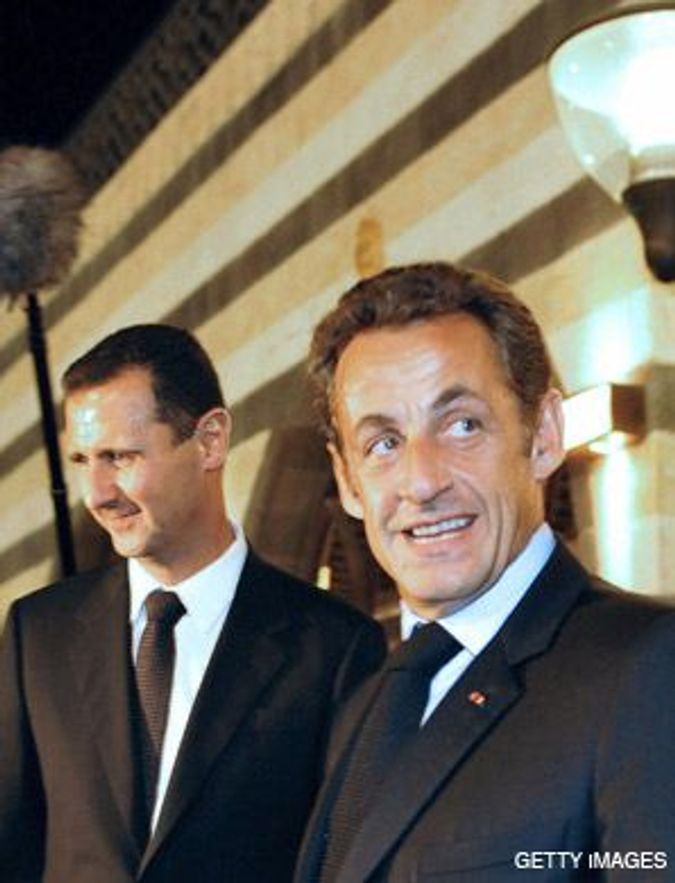 LOOKING FOR PROGRESS: French President Nicolas Sarkozy, above, recently traveled to Damascus in the hopes of pushing forward the latest round of peace talks between Israel and Syria.

Filling the diplomatic vacuum created by the Bush administration’s reluctance to engage with Syria, Sarkozy offered to sponsor direct peace talks between Damascus and Jerusalem in an effort to bolster ongoing indirect negotiations.

Both Syria and Israel have indicated recently that their indirect talks, which have been mediated by Turkey, are making progress. In the past week, reports of a willingness to compromise on several particularly thorny issues, including the presence of Hamas leadership in the Syrian capital and disputed territory on the Israeli-Lebanese border, have also surfaced.

“There is the French outreach effort, and the indirect talks with Israel are doing quite well,” said a Syrian official, on condition of anonymity. “But we still need to get to direct negotiations with Israel, and we don’t see this happening for now,” the official added, arguing that support from Washington for the diplomatic efforts was not enough for real progress.

The Bush administration has not indicated whether it would be ready to join France’s diplomatic efforts. Alongside President Bush’s soon-to-end time in office, the prospects of a diplomatic breakthrough between Jerusalem and Damascus are clouded by the uncertainty hovering over the future make-up of the Israeli government. The Kadima Party is scheduled to hold primary elections later this month to replace embattled Prime Minister Ehud Olmert, who launched the Turkey-mediated talks last spring.

With diplomatic efforts in Washington and Jerusalem weighed down by domestic concerns, the French have seized the opportunity to regain a primary peacemaking role in the region.

After meeting with Syrian President Bashar al-Assad, Sarkozy said that Paris was ready to sponsor direct Syria-Israel talks. The Syrian leader said he had conveyed through Ankara a proposal for direct talks with Israel.

Relations between Paris and Damascus soured in 2005 after the murder of former Lebanese prime minister Rafik Hariri. France and the United States accused Syria of being behind the assassination, a charge that Damascus has firmly denied.

The Qatari-brokered deal between Hezbollah and the Lebanese government led to a warming of ties between France and Syria. In July, Assad was Sarkozy’s guest in Paris at a summit of Mediterranean countries. At the summit, Syria and Lebanon agreed to open embassies in each other’s capitals for the first time since the 1940s.

French officials have indicated that they are also willing to play a constructive role in talks between Israel and Syria, which have been handled primarily by Turkey since they were officially launched in May. A fifth round of talks is scheduled to begin later this month and will focus on demarcating a future border following an Israeli withdrawal from the Golan Heights.

On September 2, Assad declared in an interview on French television that indirect negotiations with Israel had brought about “the possibility of peace.” He cautioned, however, that “we cannot say that we are close to achieving peace.” He said during Sarkozy’s visit that Syria was awaiting an Israeli response to his direct peace talks proposal.

Earlier this month there appeared to be movement on one of the main sticking points between Israel and Syria: Damascus’s backing of Hezbollah in Lebanon and Hamas in Israel. On September 2, the Kuwaiti newspaper Al-Rai, quoting unnamed Palestinian sources, reported that Khaled Meshal, the Damascus-based head of Hamas’s political wing, had “moved to Sudan from Syria” as a result of the Israel-Syria talks.

Hamas has forcefully denied the allegations. A Syrian official contacted by the Forward said that the report was “highly doubtful.” He added, “We’re not there.”

In recent days, there also appeared to be movement on another obstacle to a peace deal. Israel, Lebanon and the United Nations peacekeeping force in southern Lebanon are reportedly nearing an agreement on an Israeli withdrawal from contested parts of the northern town of Ghajar, which straddles the Israeli-Lebanese border. Both the Israeli daily Haaretz and the Arab daily Asharq Al-Awsat reported that Israel had informed Washington of its readiness to cede control of the northern part of the town.

Bur Mark Regev, a spokesman for the Israeli Foreign Ministry, told Israeli media that “no new decision had been reached yet.” A State Department official, meanwhile, said that Washington had received no official notification from Jerusalem about a decision on Ghajar.

Israel and Syria Keep Talking Indirectly, Now With Paris at the Helm