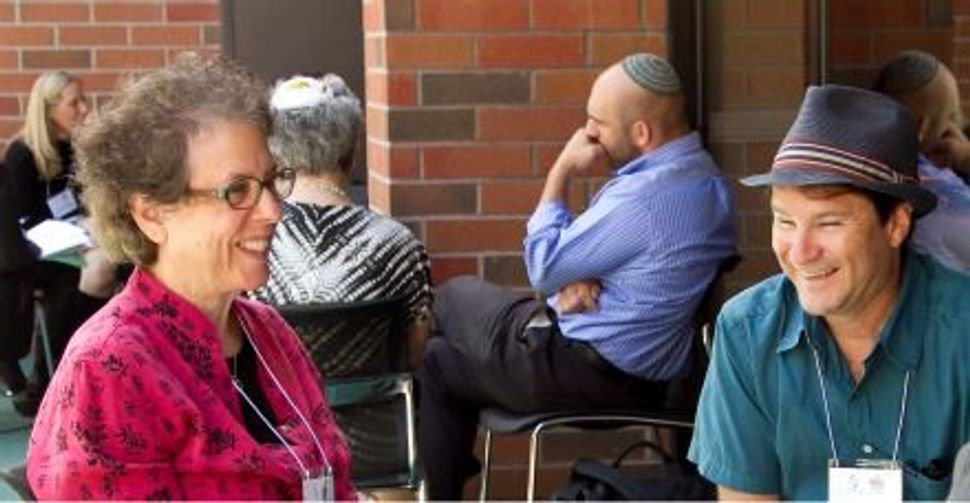 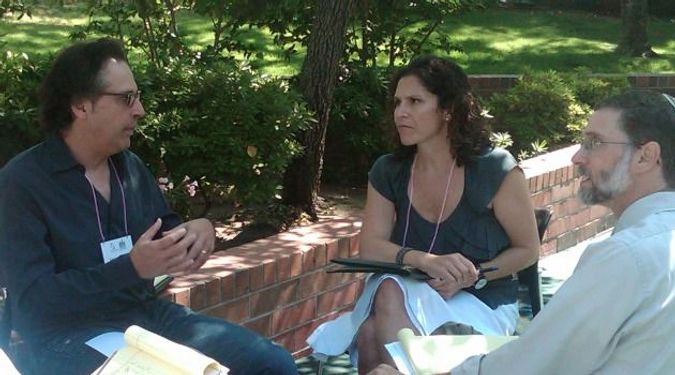 Inspiration From On High: Rabbis met with Hollywood scriptwriters as they sought to create punchier sermons for the High Holy Days. Image by Rex Weiner

Comedy writer Janet Leahy was working on an episode of “The Simpsons” a couple of years ago, when her rabbi asked her for three jokes to punch up his Rosh Hashanah sermon.

With this year’s High Holy Days looming, Leahy sat on the sun-drenched terrace of the Stephen S. Wise Temple and listened attentively to two other rabbis pitching ideas for their biggest sermons of the year.

“It’s about a leap of faith,” said Rabbi Karen Fox of the Wilshire Boulevard Temple. “About accepting what will be…”

“How you let go of fears,” Leahy interjected, taking Fox’s theme and running with it, “so you can move forward and take the journey.”

The veteran writer connected Fox’s premise to a rafting trip she took down the Colorado River. Leahy quickly segued into her own life in the rough-and-tumble entertainment business, and the scariness of “constantly losing our jobs and looking for work.”

“Don’t be afraid,” chimed in Rabbi Jason Weiner, who will be delivering his High Holy Day sermon to staff at Cedars-Sinai hospital. “‘Don’t be afraid’ is the most repeated phrase in the Bible whenever God speaks.”

In Jewish learning, this kind of give-and-take is similar to havrutah, a session in which everyone shares ideas. In Hollywood, it’s called the Writers Room, a fast-paced process where scriptwriters sit around a table and trade ideas under tight deadlines and the pressure to turn out hit shows.

Put the two together, and you get the High Holy Days Seminar, the largest trans-denominational gathering of rabbis on the West Coast. Presented by the Board of Rabbis of Southern California, under the aegis of the Jewish Federation of Greater Los Angeles, this year’s event was reshaped by the board’s executive vice president, Rabbi Mark Diamond, and seminar chair Rabbi Jon Hanish.

“Rabbis want to be on the cutting edge,” said Hanish, who organized the Professional Writers Workshop for the August 16 seminar. Having dabbled in the movie business, Hanish attended the University of Southern California’s film school, sold a few screenplays and ran a postproduction facility before deciding to deliver sermons instead of pitching scripts. “My screenwriting classes taught me more about writing sermons than rabbinical school,” he said.

It was Hanish who had solicited jokes from Leahy, and by drawing on his industry ties pulled together a slew of star writers for the workshop. The impressive roster included Leahy and colleague Lisa Albert, both writers for The AMC series “Mad Men”; Emmy- and Golden Globe-winning television writer/producer David M. Israel of Nickelodeon’s new series “How To Rock,” and Jason Katims (NBC’S “Parenthood” and “Friday Night Lights,” Fox’s “Boston Public”).

“We are all working on something,” Hanish said jokingly at the beginning of the session before directing the writers and rabbis to break into working groups of two and three.

The writers expressed some awe at the task at hand.

“The High Holy Days is like your sweeps,” Albert said, referring to the crucial weeks when TV ratings count most. “It’s like giving doctors advice just because you wrote ‘ER,’” another writer added.

In one session, a rabbi asked if it was possible to make his sermons more personal with examples from real life without intruding or making his congregants uncomfortable.

“People come to me for counseling,” he said, “but they don’t want to wind up in a sermon.” The writer nodded sympathetically, but it looked like he was tucking away that idea away for a future episode.

“Confronting the dark side” was the edgy topic in another group, with allusions to Moses and snakes in the desert. “It leads to healing,” the rabbi said. The writer agreed.

“How do you like the ending?” another rabbi asked writer Dahvi Waller after she had perused a draft of the rabbi’s sermon.

Waller, a veteran of ABC’S “Desperate Housewives,” liked the first draft for earning what TV writers dub “The vomit pass — where we just get it all out there.”

Still, she said the sermon needed a “polish,” with fewer generalities and more details.

“What makes writing fresh is finding specificity,” Waller told the rabbi, advising to sharpen generic terms “like it’s a real story.” “The character wears a certain necklace, or has a lisp.”

David Weiss handed back to a rabbi a sermon whose theme was “This Is the Moment.” Words were circled on the page. He gently advised using more humor — “Top 10 lists, or taking the biblical and transposing it to the modern… you know, Abraham and Sarah on the way to Costco. Cheesy cheap tricks like that.”

The rabbi looked quizzical, but Weiss was undeterred. “TV is… a constant series of riddles,” he observed. “Like Mark Twain said, ‘You have to constantly surprise people with the expected.’”

The session ran well over its allotted hour, and the writers exchanged e-mail addresses with the rabbis, promising to help them with jokes and rewrites. Hanish seemed pleased. “We’re piloting this program,” he said, indicating that if it was picked up next year, it would probably go through a few rewrites.

Along with the Hollywood types, the rabbis got some tips from clergymen who have a knack for lighting a fire under their congregations.

Perhaps the best advice came from the Rev. Cecil “Chip” Murray, the legendary former pastor of L.A.’s First American Methodist Episcopal Church. At 82, he still works the pulpit with the agility of a sanctified James Brown. Murray gave the assembled rabbis a taste of that old-time religion.

“If you hear the people snoring,” Murray declared, cupping a hand to his ear, “you’re violating the 11th Commandment!”