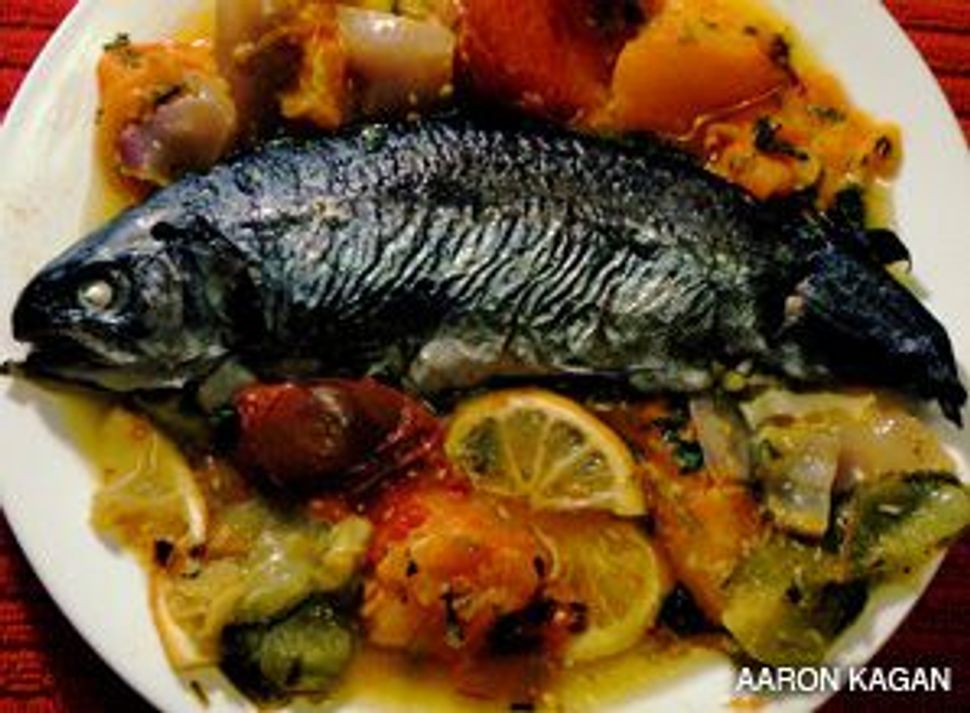 HEAD OF THE YEAR: Moroccans observe the custom of serving a whole fish on Rosh Hashanah. Above, Moroccan baked white fish.

A list of foods served around the world on Rosh Hashanah would contain at least as many items as there are raisins in a round challah. Jews of all nations prepare countless dishes specific to the New Year, perhaps nowhere more so than in Morocco. 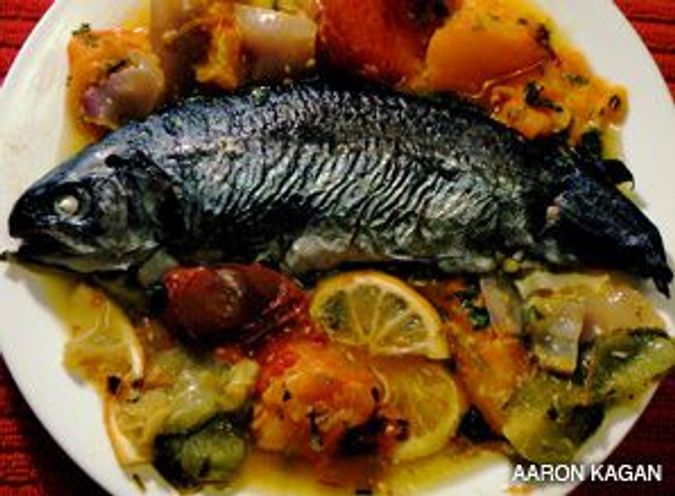 HEAD OF THE YEAR: Moroccans observe the custom of serving a whole fish on Rosh Hashanah. Above, Moroccan baked white fish.

A country renowned for its cuisine, Morocco has Rosh Hashanah food traditions that draw upon regional themes while adding elements of the spiritual and ceremonial. Two things largely influence a Moroccan Rosh Hashanah menu: what one should eat and what one shouldn’t eat. Dark foods, such as prunes and black olives, are considered taboo because they are thought to provide an ominous start to the year. In accordance with Jewish custom, Moroccans hope that sweet foods will set a good tone for the upcoming months, and so they serve even meat and vegetables — such as eggplant — with sugar.

Such pairings might seem unusual to the palates of American Jews accustomed to apples and honey, but these dishes are common throughout the region and are a much anticipated treat on Rosh Hashanah.

“Let’s put it this way,” Jewish food guru Joan Nathan said, “they’re not American tastes. My guess is that they won’t make it to the next generation, though you’ll still find them in France.” After a brief reflective pause, she continued, “There is nothing better than Moroccan food.”

Moroccans also eat foods on Rosh Hashanah that have a similarity to words used in prayers and puns. The lengthy list of such ingredients includes pumpkin, fenugreek, dates, pomegranates, beets and beet greens, leeks and carrots. The Yiddish word for carrot is “meren,” which is the same as that for “increase.” Eating carrots on Rosh Hashanah is therefore thought to promote growth and bounty in the coming year, and in Morocco they are served in an incredibly flavorful cold salad.

Animals such as fish or lamb are sometimes cooked whole, with the head included, in honor of the literal meaning of Rosh Hashanah, the “head of the year.” This custom also reflects the hope that the Jews might serve as a “head” among nations (and not the opposite). The significance of such dishes is driven home by serving the first portion to the head of the table. Dishes made from brains are popular for similar reasons.