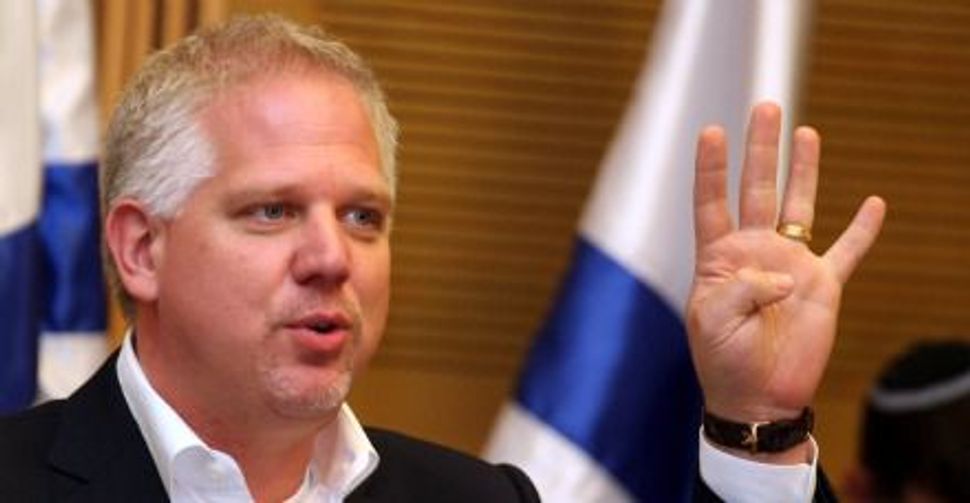 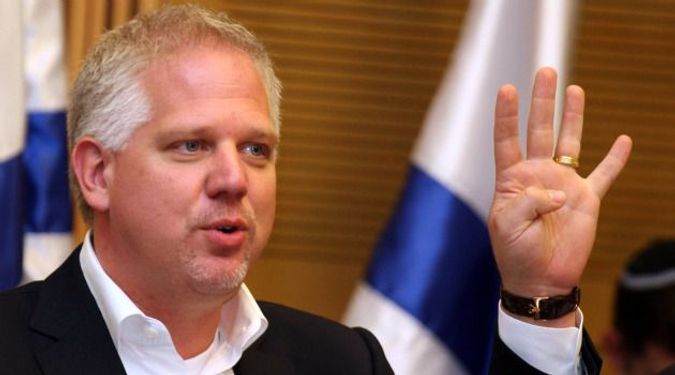 Beck?s Back: Radio talk show host Glenn Beck is back in the news with a provocative trip to Israel. Image by Getty Images

Glenn Beck is in Israel, again. In July, the talk radio host and former Fox News star was invited to the Kensset, where he met “a room full of admirers” — in the words of a Channel 1 report — led by Likud MK Danny Danon. Beck urged Israelis to stand strong; among those shaking his hand was Baruch Marzel, former chairman of the outlawed Kach movement. Yet it seems that this honor wasn’t enough for Beck, who is back for a couple of Israeli rallies this week under the name of “Restoring Courage.”

Americans are by now very familiar with the wild and irresponsible side of politics that Beck represents. Beck stokes hate among ethnic groups and pays little respect to democratic traditions in his own country, let alone in the rest of the world. Many of his comments in recent years have bordered on anti-Semitic. He embraced anti-Semitic writers, and all but one name on his list of “enemies of America and humanity” were Jews. Those were still mild references compared with the language Beck uses against liberals — and Jews are the most liberal group in America. Beck is toxic: Even Fox News got that, and eventually dumped him. If you were representing a company and your product was in trouble, Beck would have been the last public relations man on earth you’d call. Yet this is exactly what Israel has done.

By supporting the right-wing government in Jerusalem, Beck seems to have found new respect in the eyes of many Jews and Israelis. While in Israel, Beck will be meeting with Vice Premier Moshe Ya’alon and a couple of other government ministers, and even with centrist MK Einat Wilf from Ehud Barak’s Atzmaut party.

This is not the kind of help Israel needs. Beck’s religious rhetoric, his radical conservative positions and his fondness for the idea of Armageddon present a real danger to the well-being of Israelis and Palestinians alike, especially given that Beck’s rallies are taking place less then a month before the Palestinian Authority’s United Nations bid. Beck claims to stand by Israel but his views are similar to a small, extreme minority in this country.

Beck places the conflict with the Palestinians within a childish “clash of civilization” context. His belief, shared by many in evangelical circles, is that Israel is the focal point of a worldwide struggle between good and evil. This notion is at odds with the need to see the conflict as a political problem and thus strive for a peaceful and just solution that would allow Palestinians and Jews to live together. Even scarier is the fact that those who push for this ultimate morale showdown between good and evil in the holy land live in a faraway country and would not have to face the terrible consequences of their actions.

Originally, Beck wanted to hold his rally on the Temple Mount. Naturally, Jerusalem’s police department refused; after all, it was a visit by Ariel Sharon, then head of Likud, to the Temple Mount that arguably sparked the second intifada. And while there were other reasons for the outbreak of violence at that particular moment, one couldn’t help but speculate as to how the Middle East’s history would have looked if Sharon had been denied his request to visit the holy site. Yet even Sharon was an Israeli-elected Member of Knesset, representing the real desires of a large portion of the population living here. Beck is not. His rally is nothing but an empty provocation intended to bring fame to a declining conservative loudmouth, at the expense of the very real people living in this country.

Beck’s contempt for many of the Israelis he pretends to support was revealed when he mocked the social-justice protest movement that led hundreds of thousands of Israelis to take to the street and still enjoys more than 80% of the public’s support in national polls. Describing the protest’s demands — which are well rooted in Israel’s history as a welfare state —as nothing but a plot against Prime Minister Benjamin Netanyahu led by communists and Muslims, Beck revealed again his ignorance of the local history and of the political system he chose to invade.

It is not a coincidence that Beck “found” Israel once his political star began to fade. It seems that in their despair, an increasingly isolated Israeli government and a politically alienated fundamentalist Christian movement have created a dangerous bond, one that might prevent Israeli leaders from facing the hard choices they need to make, and one that will serve the American conservatives as an effective vessel for their march on Washington. The more Beck and his army of evangelicals tie themselves to the Israeli case, the more difficult it will be to carry out the complex mission of helping Israelis find a way out of the impasse they are currently in.

Progressive forces in Israel cannot fight this dangerous alliance on their own. Community leaders in the United States were slow to react to Beck’s vicious attacks on Jewish businessmen, but eventually they did denounce them. Yet when it comes to Israel, these voices are not heard, while conservative Jewish groups like the Zionist Organization of America go so far as to congratulate Beck on his “moral clarity.” In these difficult days, Jewish leaders have a special responsibility to make sure that our politics are not hijacked by the likes of Glenn Beck. Before we all pay a dear price for it, it’s time to make it clear to Beck that his help is not welcome.

Noam Sheizaf is an Israeli journalist based in Tel Aviv. He blogs at +972 Magazine.