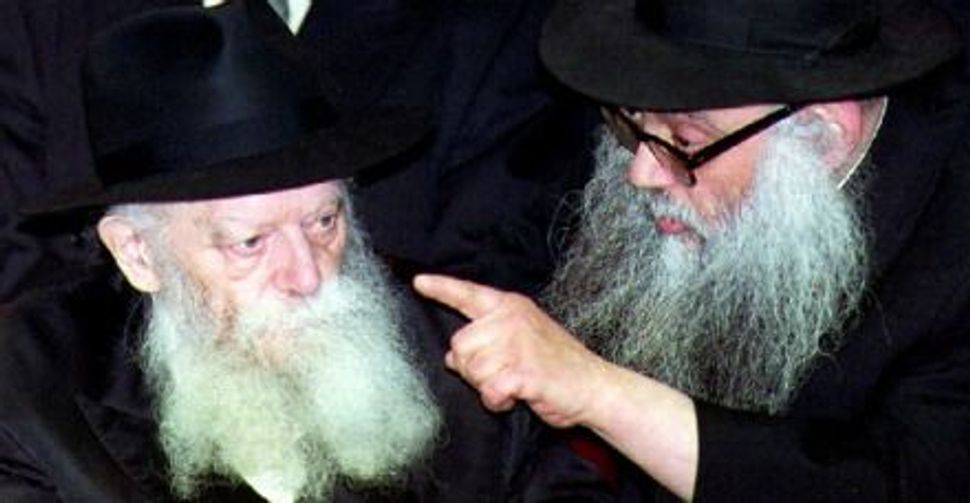 The exchange of art between America and Russia is in a deep freeze because of a legal battle between the Chabad-Lubavitch sect and the Russian government over the Schneerson Collection — almost 40,000 books and manuscripts that Moscow has and Chabad wants.

After failing to secure the collection through the Russian courts, Chabad sued in an American court and won. Now Russia is refusing to loan artworks to American museums, citing fears that they might be seized in retaliation, and American museums are refusing to send their artworks to Russia in a tit-for-tat that could drag on for months, if not years.

But in all the debate over who is the rightful owner of the collection — and whether courts in the United States have jurisdiction over Russian possessions — few people seem to be asking a simple question: Why does the collection have to leave Russia at all?

The YIVO Institute for Jewish Research has been embroiled for about 20 years in a similar battle with the Lithuanian government over some of YIVO’s archives. The Nazis stole a large part of the YIVO archive during World War II. Most of it was discovered in Offenbach, Germany, and returned to YIVO by the U.S. Army. But a substantial collection of materials, including about 8,000 books and many sacks of archival documents, remained in Vilna. YIVO has been seeking to retrieve these items since the fall of the Soviet Union. Then, Jonathan Brent, YIVO’s executive director and CEO, tried a different tack.

“I went to Lithuania a year ago and proposed [the documents] stay there,” Brent said. In return for dropping YIVO’s fight for the archive, Brent said, he asked the Lithuanian government to establish a special room in the National Library of Lithuania for the materials and to call it the “YIVO room.” “It appears we are very close to a deal with the Lithuanian government over that,” he said.

Brent said it is “truly a travesty” that the Schneerson collection, which is divided between two Russian state institutions, is locked away. But he also said that the legal battle appeared to be at a stalemate. “This wrangling reminds me of the prostitutes and the dead baby in the story of Solomon,” he said. “In the end, all you are going to do is tear [the collection] apart.”

If Chabad wanted to follow the YIVO model, there are a number of Russian institutions that could potentially look after the collection. American and Russian-Jewish foundations have poured enormous sums into Russia in recent years to foster and encourage Jewish life there. The result has been a flourishing of Jewish museums and Jewish studies departments at Russian universities.

Meanwhile, Moscow will soon have two Jewish museums. The first opened in May. A second museum, the Russian-Jewish Museum of Tolerance, hailed as the largest Jewish museum in the world, is expected to open soon.

Mark Levin, executive director of the National Conference on Soviet Jewry, based in Washington, told the Forward: “There are all sorts of established and budding institutions in Moscow, Russia and throughout the former Soviet Union that are capable of caring for Judaica.”

Such an outcome, however, seems highly unlikely, given the immense importance that Chabad places on the collection, which consists of two parts, a library and an archive.

The Schneerson Library includes 12,000 books and manuscripts that were collected by the first five Lubavitcher rebbes, up to and including Rabbi Sholom Dovber Schneersohn. The library was seized by the Bolsheviks during the Russian Revolution and now held in the Russian State Library.

The Schneerson archive includes additional books and manuscripts, as well as handwritten documents of the sixth Lubavitcher Rebbe, Rabbi Yosef Yitzchak Schneersohn. The rabbi left these behind in Warsaw when he fled to America in 1939 at the start of World War II. The Nazis seized the archive, then the Red Army captured it and it was shipped to Moscow, where it was stored in the Russian State Military History Archive.

The repatriation of works seized during World War II is a complex and emotional topic for Russians. More than 20 million Soviet citizens are thought to have died during the war. Many Russians perceive the spoils as a form of compensation for the lives lost and hardships incurred.

When the newly formed Russian Federation began repatriating artworks seized by the Nazis during the 1990s, uproar ensued. “Most intellectuals think it was a big mistake,” said Lidia Chakovskaya, a Russian art historian who specializes in early Jewish art. “The Soviet Union suffered so much during the Second World War. But the war ended, and what was kept in the Soviet Union should stay here and that’s it.”

Russian ire over the loss of works was exacerbated by a spate of thefts during the 1990s in which millions of dollars worth of objects, including books and manuscripts, were stolen from major Russian museums, art galleries and libraries.

Even repatriating material to Russian institutions has been highly contentious. Last year, the Russian government passed a law returning religious property nationalized after the 1917 Revolution to religious institutions based in Russia. Chakovskaya said many specialists believe that religious institutions do not have the money or the expertise to care for these buildings, documents and other items. Even Judaica departments are incapable of looking after archives, she said.

“The Judaica department at Moscow State University had a big collection of Jewish studies books,” Chukovskaya said, “and they arranged that this collection will go to the State Library as a collection for students to use, because the university doesn’t have the budget to keep the library.”

She added, “At the moment, we all feel there is a certain guarantee that the object will be well kept only if an object is in the state collection.”

But lawyers for Chabad maintain that the Schneerson Collection has been poorly taken care of by Soviet and by Russian authorities. Seth Gerber of the Los Angeles-based law firm Bingham McCutchen said that the collection was stored for decades in “horrible conditions” and that Russia had failed to catalog the collection despite having years to do so. “They are not being kept with any of the respect such documents deserve,” Gerber said.

He added: “These materials for decades have been boxed up and kept away from the public by the Russian government, and that is a tragedy for all of humankind.”

During the 1990s, Chabad made a number of attempts to retrieve the collection, via Russian courts and through appeals made by presidents George H.W. Bush and Bill Clinton. After these efforts failed, Chabad launched a lawsuit in the United States, in 2004. Last year, a federal judge in Washington ruled that the collection had to be returned to Chabad. But the Russian government refused to recognize the court’s ruling.

Gerber said Chabad had no intent to seize Russian artworks on loan in the United States and that the Russian lending freeze is “a retaliatory gesture by the Russian government in order to put pressure on Chabad to try to paint Chabad as the bad guy.”

“In fact,” Gerber said, “the only issue here is Russian refusal to comply with international law and the court judgment.”

The conflict has baffled some in the art world. “I just think it’s so bizarre,” said Tom Freudenheim, a museum consultant and former assistant secretary for museums of the Smithsonian Institution. “These are two unrelated worlds and they’ve come together.”