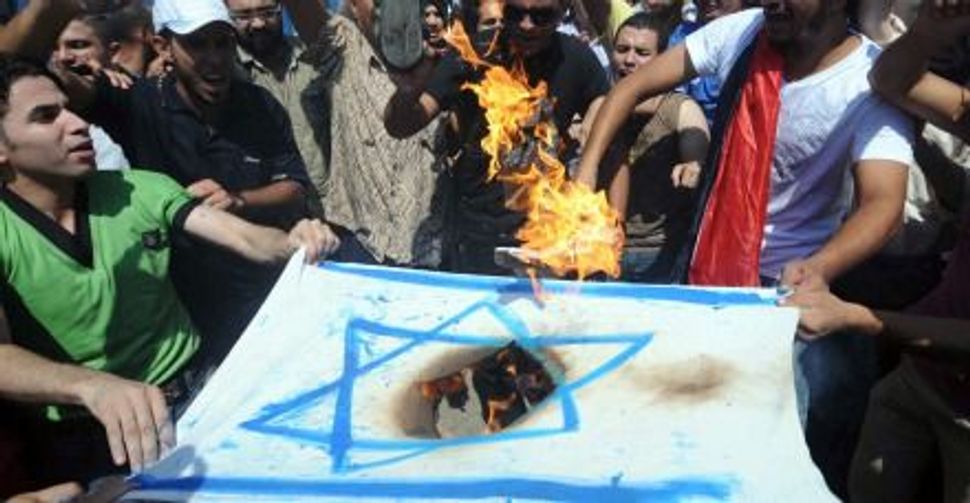 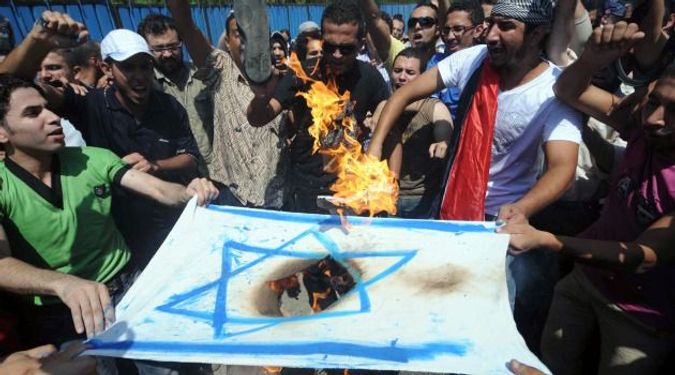 The terrorist attack launched from Egyptian Sinai, just north of Eilat, on August 18, brought Israel into a headlong collision with the problematic fruits of the Egyptian revolution.

In Sinai, 12 militants were able to spend several days reconnoitering Israeli civilian targets along the loosely patrolled Egypt-Israel border, then launch incursions into Israel from alongside an Egyptian border guard emplacement while wearing uniforms similar to the Egyptian army. Israel claims that some of the attackers were Gazans from the Popular Resistance Committees, Islamists who are more radical than Hamas. Egypt has identified three of those involved as being members of an extremist Egyptian Islamist group, one of whom escaped from a Cairo prison during the revolution. To a large extent, these attacks were a consequence of Egypt’s military having lost control over northern Sinai. 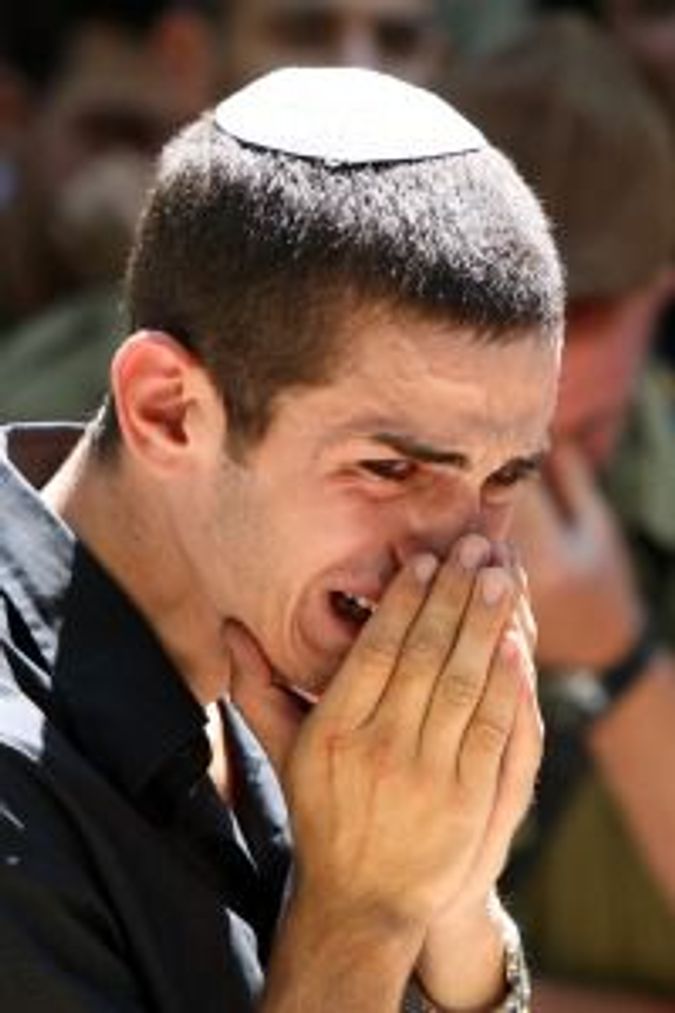 Israeli Sorrow: Man struggles with emotion at funeral for victims of terror attack near Eilat. Image by Getty Images

When Israeli retaliation against the terrorists cost the lives of several Egyptian soldiers, mass demonstrations were held outside the Israel embassy in Cairo, calling upon the junta to break off relations with Israel and cancel the two countries’ 1979 peace treaty. To its credit, the Military Council demurred, but not before calling upon Israel to apologize and threatening to recall Egypt’s ambassador. Unlike its predecessor regime under Hosni Mubarak, the junta could not afford to ignore the new phenomenon of Arab street power.

The decline of Egyptian control in Sinai — an area two and a half times the size of Israel — began under Mubarak, as the aging ruler slowly lost his grip. The northern Sinai Bedouin, some 200,000 strong, have long suffered from economic deprivation and alienation from the main body of 82 million Egyptians. After Egypt recovered Sinai from Israel in 1981, the Bedouin were largely bypassed by efforts to settle Egyptians there; economic development focused on the tourist industry in the southern part of the peninsula. As a result, Bedouins have long turned to weapons smuggling as a main source of income.

The chaos of revolution in Egypt and the military’s preoccupation with maintaining an orderly transition of power have, over the past eight months, led to further collapse of central authority in northern Sinai. Gas export installations linked to Israel and Jordan have been sabotaged five times. Police stations have been overrun at a heavy cost in lives. The arms smuggling to Gaza now begins at Egypt’s distant border with chaotic Libya and traverses the entire Mediterranean coast without interference. 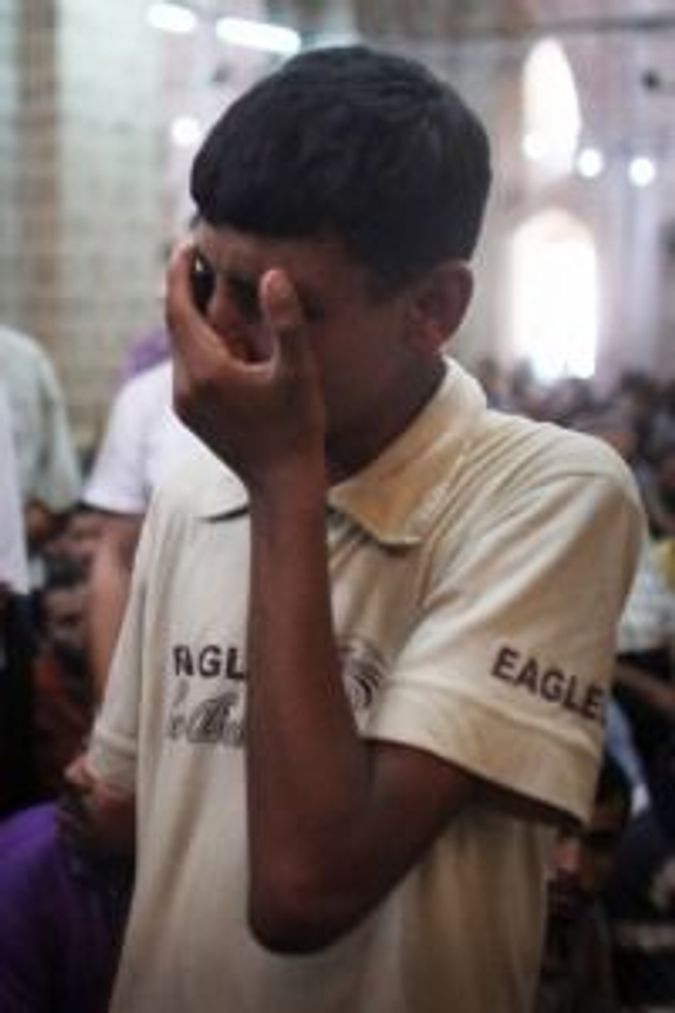 Yet the transition military regime has also sought to maintain cooperative relations with Israel, particularly at the military level. One incentive is the more than $2 billion in annual American aid that is linked to Cairo’s commitment to the peace treaty. The revolution left the Egyptian economy in such bad shape that the junta cannot afford to compromise the American connection. Another incentive is the need to keep Hamas in Gaza sufficiently quarantined to prevent it from interacting too closely with the Egyptian Muslim Brotherhood, its parent organization. Here Cairo’s military rulers walk a delicate tightrope between integrating the Brotherhood into a working constitutional democracy and preventing an Islamist takeover. A third incentive is Cairo’s need to avoid escalation on any of its borders as Egypt emerges from revolutionary transition. A fourth is to profit from being a major energy supplier to Israel.

Israel, too, desperately needs to maintain stable relations with a changing Egypt. The 1979 peace treaty enabled Israel to radically reduce its military outlay and the IDF’s deployment in the Negev, and this in turn constituted a major contribution to Israel’s economic boom. With most of the surrounding Arab world increasingly destabilized and Iran challenging Israel by proxy on the Lebanon and Gaza borders, military deterioration with Egypt would demand a sea change in Israel’s strategic approach to the region. “Losing” Egypt, on top of the deterioration of Israeli-Turkish relations, would leave Israel with virtually no reliable neighbors in the region.

Imagine military tension with Egypt, Gaza, Syria and Lebanon-based Hezbollah all at the same time: We’re back to pre-1967 square one, with militant Islam replacing Nasserism. This is the backdrop to the relatively cautious decisions the Netanyahu government rapidly made over the weekend following the incident north of Eilat. It retaliated in force against targets in Gaza, but rebuffed calls — from, of all parties, the moderate Kadima party opposition! — to send land forces into Gaza and “teach them a lesson.” Instead, it heeded Egypt’s call for a ceasefire.

Israel also honored the Egyptian military regime’s demand for an apology regarding the death of Egyptian troops; in a rare gesture, Defense Minister Ehud Barak expressed his regrets. Ignoring the apparent carelessness or even complicity of Egyptian troops in the terrorist attack, Barak agreed that the two militaries now jointly investigate the fatalities. Further, having already agreed twice in the past half year to the entry into Sinai of additional troops beyond those permitted under the two countries’ peace treaty — in a thus far abortive effort to restore central Egyptian control — Israel now appears poised to consider amending the treaty to allow for a beefed-up permanent Egyptian military presence along the borders with Israel and Gaza. If this happens, Israel will be taking a calculated risk that Islamist-inspired Egyptian troops in Sinai could constitute more of a security asset than a burden.

The situation in Sinai is also now understood to mandate a greater Israeli budgetary outlay for Negev security. This has immediate ramifications for Israel’s widespread social protest movement — itself in part inspired by Egypt’s Tahrir Square protests. Netanyahu had apparently been planning to move several billion shekels from Israel’s defense budget toward relief for the middle class in the form of free pre-school education and more accessible housing. Now, he has to let Barak spend that money on a quickie border fence and more Iron Dome anti-rocket missile batteries. If he tries to take the funds from the most obvious source — entitlements for the ultra-Orthodox and the settlers — his right-religious coalition will be in trouble.

The crisis with Egypt brought on by the Negev terrorist attack reflects Israel’s dilemma in trying to adjust to a rapidly changing Arab world. Today’s solutions could be rendered irrelevant by tomorrow’s events.

But the crisis also highlights one all-too-constant Egypt-related issue — what to do about Gaza? — for which neither Netanyahu nor his predecessors have had any effective strategy at all. Economic siege gave Israel a bad name without dislodging Hamas or getting back Gilad Shalit. Reoccupying the Strip would be too costly in Israeli blood and international condemnation, and there is no obvious exit strategy. An offer to talk directly to Hamas could well be rebuffed by the Palestinian Islamists, who refuse to countenance Israel’s existence, and could alienate the far more moderate West Bank-based PLO, not to mention Washington.

Even assuming Jerusalem does succeed in patching things up with Cairo, the most assistance Egypt’s temporary rulers can offer Israel with Hamas is supporting efforts to maintain a ceasefire.

Yossi Alpher coedits bitterlemons.net. He is former director of the Jaffee Center for Strategic Studies at Tel Aviv University.