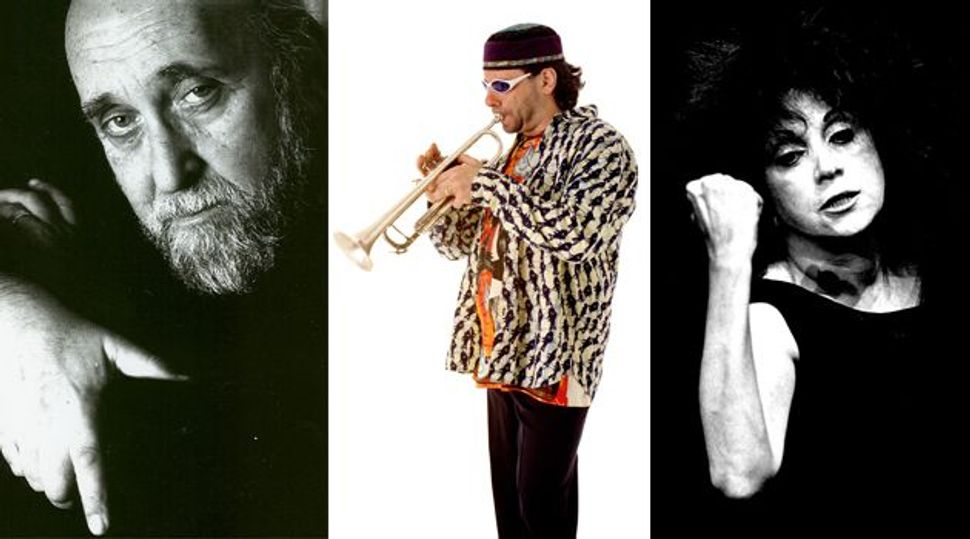 The Jewish Daily Forward presents the fourth installment in a new series of innovative arts programming. “Jewish Art for the New Millennium” showcases cutting-edge Jewish artists and thinkers who represent their identity in the most original, innovative ways. Klezmer superstar Frank London, theater radical Judith Malina and poet extraordinaire Jerome Rothenberg team up for an evening of intellectually provocative words and music as each performs separately and then join forces for a collaborative session and conversation with the audience.

Judith Malina is an actress and co-founder of the legendary Living Theatre. An actress, writer and director Malina was born in Germany, the daughter of Rabbi Max Malina and Rosel Zamora, an aspiring actress and was trained in acting by her mother from an early age. She began attending the New School for Social Research in 1945. Committed to non-violence and anarchism and seeing theatre as a form of political communication, Malina began work in 1951 for The Living Theatre at the Cherry Lane Theatre, where many of its earliest performances were staged. In 1963 Judith appeared in Jack Smith’s Flaming Creatures. She played Al Pacino’s mother in “Dog Day Afternoon,” directed by Sidney Lumet. In 1990 Judith performed opposite Robert DeNiro and Robin Williams in “Awakenings.” She played Granny in “The Addams Family” (1991) and was featured in “Household Saints” (1993). More recently, she was seen in the independent film “Nothing Really Happens” (2003). She has appeared in episodes of “ER” and “The Sopranos.”

Jerome Rothenberg is an internationally known poet, performance artist, translator and anthologist with over eighty books of poetry and ten assemblages of traditional and contemporary poetry such as “Technicians of the Sacred,” “A Big Jewish Book” (a.k.a. “Exiled in the Word”), and “Poems for the Millennium. Poetics & Polemics [essays] 1985-2005.” He was a founding figure of ethnopoetics as a combination of poetic practice and theory, and he has been a longtime practitioner and theorist of poetry performance. “Triptych,” his thirteenth book of poems from New Directions, appeared in 2007, and books of his poetry published in 2010 and 2011 include “Concealments & Caprichos” (Black Widow Press), “Gematria Complete” (Marick Press) and “Retrievals: Uncollected & New Poems 2005-2010” (Junction Press).

Frank London is a Grammy award winning composer and trumpeter. He’s a member of The Klezmatics, and leads his Klezmer Brass Allstars, whose CD “Carnival Conspiracy” was Rolling Stone’s #1 Non-English recording of 2006. His opera about the Soviet Yiddish theater, “Green Violin,” was performed in Amsterdam, St. Petersburg and at New York’s Jewish Museum. He has explored Jewish jazz with Hasidic New Wave, cantorial music on “Hazonos” and “Invocations,” and mystical music on “tsuker-zis,” “Nigunim” and “The Zmiros Project.” Musicologist Joel Ruben called him “the person most responsible for pushing the klezmer revival in the world beat and fusion with rock and jazz.” London has performed with John Zorn, LL Cool J, Itzhak Perlman, Youssou N’dour, Iggy Pop, Mel Tormé, Lester Bowie’s Brass Fantasy, LaMonte Young, They Might Be Giants, David Byrne, Jane Siberry, Ben Folds 5, Mark Ribot and Michael Tilson Thomas. He has been Artistic Director of KlezFest London, guest Artistic Director of Sao Paulo, Brazil’s Kleztival and is currently on the faculty at SUNY Purchase.

The Forward is a legendary name in American journalism and a revered institution in American Jewish life. Launched as a Yiddish-language daily newspaper on April 22, 1897, the Forward entered the din of New York’s immigrant press as a defender of trade unionism and moderate, democratic socialism. The Jewish Daily Forward quickly rose above the crowd, however; under the leadership of its founding editor, the crustily independent Abraham Cahan, the Forward came to be known as the voice of the Jewish immigrant and the conscience of the ghetto. It fought for social justice, helped generations of immigrants to enter American life, broke some of the most significant news stories of the century, and was among the nation’s most eloquent defenders of democracy and Jewish rights.

The Forward family of newspapers continues to carry on the founding vision of Abraham Cahan, serving together as the voice of the American Jew and the conscience of the community.

Read more: The Arty Semite: A Night of Music, Poetry, and a Whole Bunch of Jews

The Jewish Daily Forward presents the third installment in a new series of innovative arts programming. “Jewish Art for the New Millennium” showcases cutting-edge Jewish artists and thinkers who represent their identity in the most original, innovative ways.

Legendary avant-garde guitarist Marc Ribot, multi-instrumentalist Jessica Lurie and writer and poet Ammiel Alcalay team up for an evening of intellectually provocative words and music as each performs separately and then join forces for a collaborative session and conversation with the audience.

Ammiel Alcalay is a poet, writer, critic, translator as well as a professor at the CUNY Graduate Center. He is widely known for exploring the junctions between poetry and politics, especially those pertaining to the Middle East, as well as having a distinctly unique, radical approach to writing that melds together various genres into a single discourse. A world-renowned scholar of Middle-Eastern and Sephardic literatures, Alcalay’s collection of poetry and photography, “Neither Wit Nor Gold” was published by Ugly Duckling Press earlier this year. He also directs “Lost & Found,” the CUNY Poetics Document Initiative, which features correspondence, journals, critical prose and transcripts of talks by influential American poets. Alcalay’s work has appeared in the New York Times Book Review, The New Yorker, Time magazine, The New Republic, Village Voice, Jerusalem Post, Parnassus, and many other publications. Click here for more info.

Jessica Lurie is a virtuoso saxophonist, accordionist and vocalist, as well as a composer, widely known for her “flair suggestive of a Balkan John Coltrane or klezmerized Sonny Rollins” (JamBase). She’s worked with a diverse base of performers including Bill Frisell and The Indigo Girls, Mark Ribot and Sleater Kinney, among many others. In 2000, she started her own label, Zipa! Music. In 2006, Jessica was awarded a Sundance Music Institute Fellowship for film composition. Click here for more info.