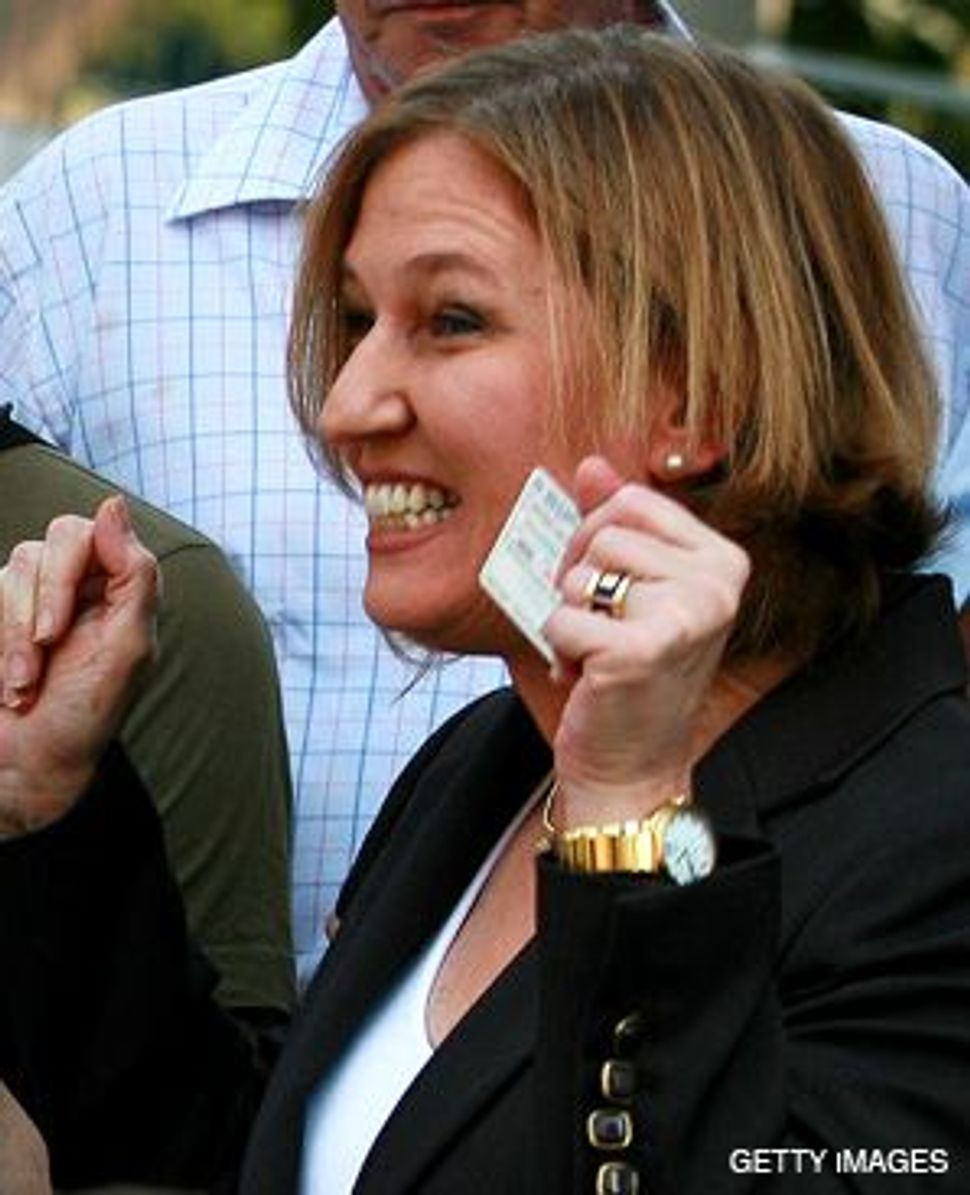 MOVING FORWARD: Tzipi Livni?s successful bid to head her centrist Kadima party raises a political challenge for the Labor party in the next general election.

The election of Tzipi Livni, Israel’s foreign minister, as the new leader of the Kadima party and presumptive prime minister-elect could push the once-mighty Israel Labor Party to the sidelines of Israeli politics, according to numerous observers and political insiders. 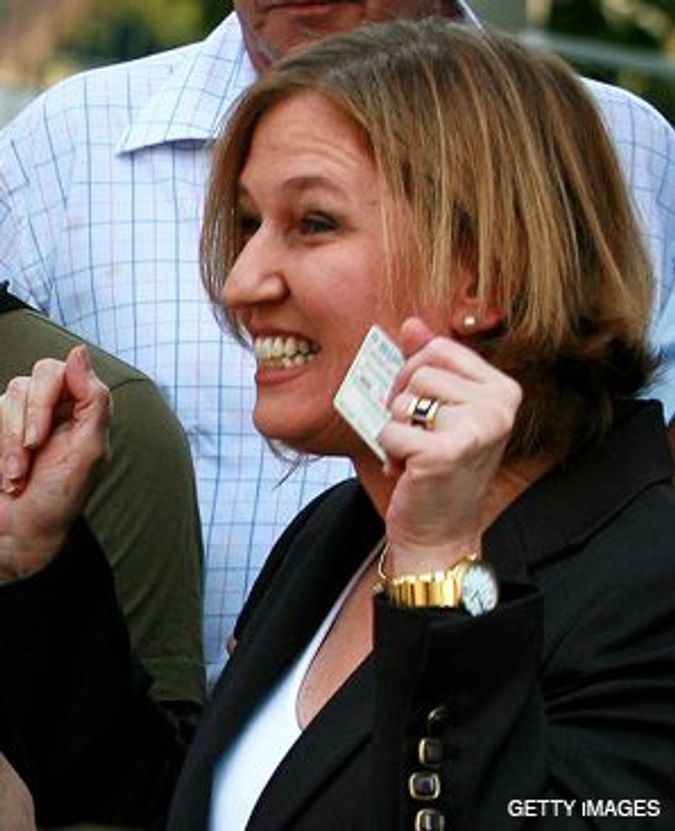 MOVING FORWARD: Tzipi Livni?s successful bid to head her centrist Kadima party raises a political challenge for the Labor party in the next general election.

Livni, who advocates territorial compromise with the Palestinians, was the most dovish candidate in the race leading up to this week’s Kadima primary. She is widely viewed on the left as offering the most realistic chance of peace, and is expected to steal Labor’s thunder in the next general elections.

“Her selection means that Labor will now have to confront somebody too similar to its own opinions, and will not be in a good position to fight the next election,” Haifa University politics professor Eran Vigoda-Gadot, an expert on political behavior, told the Forward.

Livni claimed a narrow victory over her closest rival, the hawkish Shaul Mofaz, in the September 17 primary. Hoping to show her prime ministerial ability before going to a general election, she has already entered talks with possible coalition partners.

Although she could theoretically govern until 2010 without calling elections, few believe her government would be stable enough to survive until then. A general election in six months to a year is widely anticipated. For now, all eyes are on what her election as Kadima’s leader will mean at the ballot box. A survey for Ma’ariv published on September 11 concluded that with Livni heading Kadima, a general election would be a two-horse race between her party and Benjamin Netanyahu‘s Likud. The survey showed Kadima winning 25 seats in the 120 legislature. Likud would win 29.

A Mofaz-Netanyahu contest would be a very different matter, the poll said. Likud would still get 29 seats, but Kadima would trail with just 17.

But the key finding is that against Mofaz, Ehud Barak’s Labor would keep all but one of its current 19 seats. Against Livni, the party stands to win just 14 – a figure that pollsters expect to drop significantly closer to an election.

“Barak is between a rock and a hard place,” said pollster Mitchell Barak (no relation to Ehud Barak), CEO of Keevoon Research, Strategy & Communications. “If Livni is in office, she will have momentum and can probably draw more voters from the left. If she goes to elections — and if this happens, as would be likely, because Labor is holding out and makes it that she can’t put together a coalition — [left-wing] voters are likely to be unforgiving.”

Vigoda-Gadot, the Haifa University political scientist, said he is certain that with Livni leading Kadima, “the real runners will not include Labor — they will be Kadima and Likud.” For traditional Labor supporters, “she’s exactly what they expect in a balanced person, in terms of the regional conflict and economic policy.”

Avraham Brichta, Haifa University professor emeritus who is best known for his research on Israeli elections, said: “Barak is afraid of Livni. As well as her political appeal, she is more likeable than him. Barak is very capable, but is seen as vain and not very appealing. People don’t like him. By contrast, people find Livni likeable.”

But while Livni stands to fare well in elections, her attempts to put together a coalition and govern in the meantime are likely to be marred by questions over where her mandate comes from.

The population of Israel is around 7 million. But only the 74,000 Kadima members y were entitled to vote in this primary. Livni was elected by 43.1 percent of the members who turned out to vote, or 16,936 people. She received just 431 more votes than Mofaz.

Hearing the result, Likud parliamentary whip Gideon Saar called for immediate elections. “Forming a new government based on the votes of 431 Kadima members would be a legal farce,” he said.

Many political experts claim that Livni has actually been chosen by an even smaller group. “The mandate is not even from these members, but from a group of functionaries in Kadima, people who buy and sell votes,” political analyst Gideon Levy of Haaretz told the Forward.

He was referring to the fact that many of the 74,000 party members have been with Kadima for a matter of weeks, recruited by so-called vote contractors tied to candidates. Before talk of primaries, membership was just 30,000.

In rare consensus with the left-wing Levy, considered a voice of the left, the right-wing journalist Caroline Glick, deputy managing editor and columnist with the Jerusalem Post, said: “These voters were, in a sense, fictitious voters. She owes her victory to a dozen or so vote contractors who are not accountable to us. We don’t even know who they are.”

The contractors are famously zealous. Police are investigating how some members were enrolled and did not even know. Many contractors work by targeting a certain community or occupational group to which they are connected.

In the Livni camp, Deputy Foreign Minister Majalli Wahab signed up 7,000 of his fellow Druze.

In the Galilee Arab and Druze town of Ghajar, some 1,001 of the 19,000 residents are Kadima members. Many were encouraged to join by Mofaz supporter Hamda Ganem. An elder of the largest family in the town, Ganem is head of the Transportation Ministry’s licensing department, a job given to him by Mofaz. Signing up new members to vote for their candidate is the way that the “old boys’ network” operates today, said Tel Aviv University political scientist Dani Koren. “Later, they will in a roundabout way be rewarded for their loyalty.”

“Today, you join up to affect a result,” commented Koren. “You are not really a party member. Primaries are destroying parties. They are like pubs — you go in for a drink and then leave.”

Levy said the Kadima primary led to the emergence of “court Arabs,” similar to medieval “court Jews” who won favors from Christian nobles by lending them money. “It’s all personal interests. They will sell anything for a license to build a mall or a scholarship for their kid at university.”

He added that many Kadima members will not vote for the party in general elections. Glick said the same: “You can be absolutely certain that Arab members will not be voting for Kadima — 90% will vote for Arab parties.”

Questions about Livni’s mandate threaten her reputation as the so-called Mrs. Clean, according to pollster Barak. He commented that to reach her potential in the popularity stakes, “if her legitimacy to become prime minister is constantly questioned, it may make sense for her to move straight to elections.”