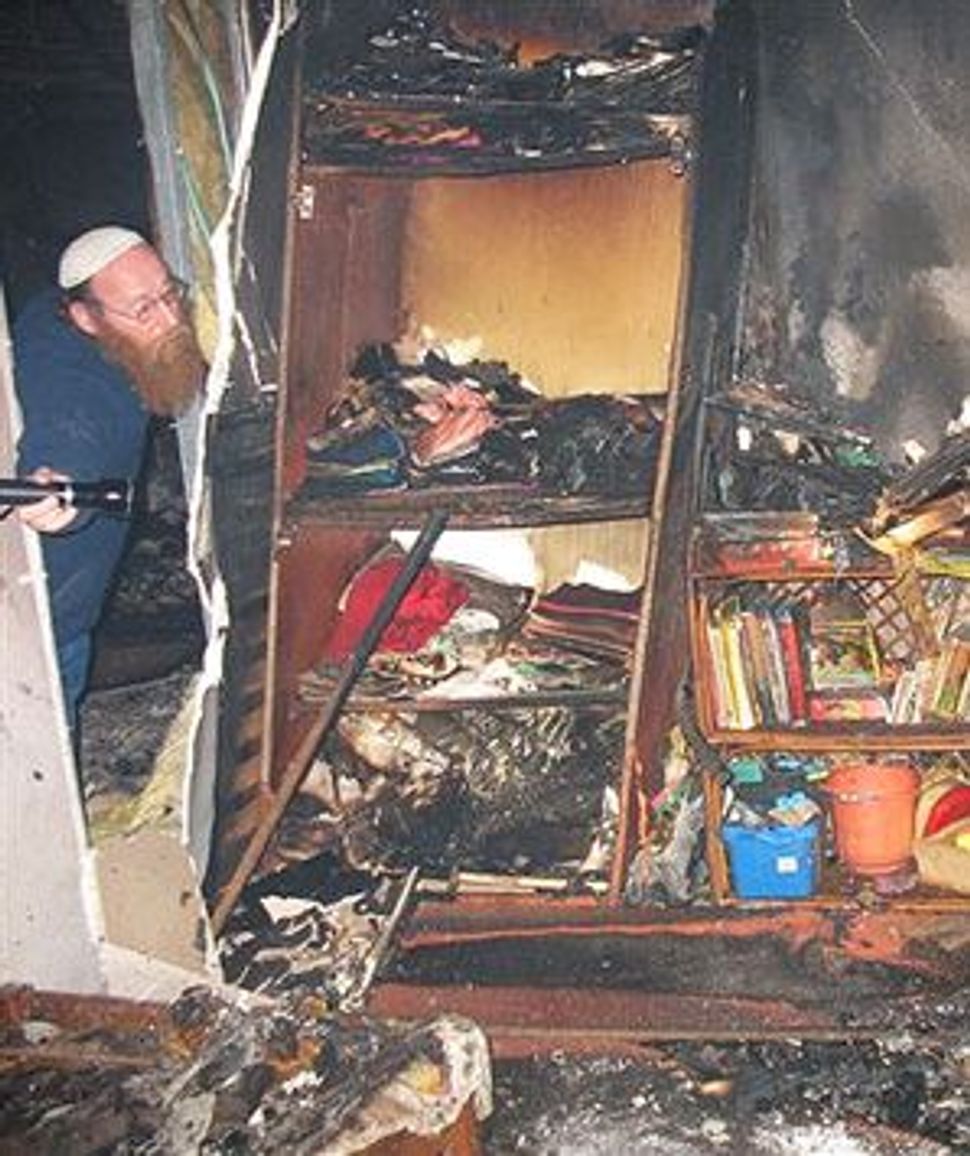 STUDY OF ASHES: A resident of the West Bank settlement of Yitzhar inspects the remains of a house torched by a Palestinian terrorist.

Haifa, Israel — A weekend of violence in the West Bank, igniting what Prime Minister Ehud Olmert likened to an anti-Palestinian “pogrom,” has touched off a public uproar over the state of law enforcement in the territories and the proper role of Israel’s security forces. 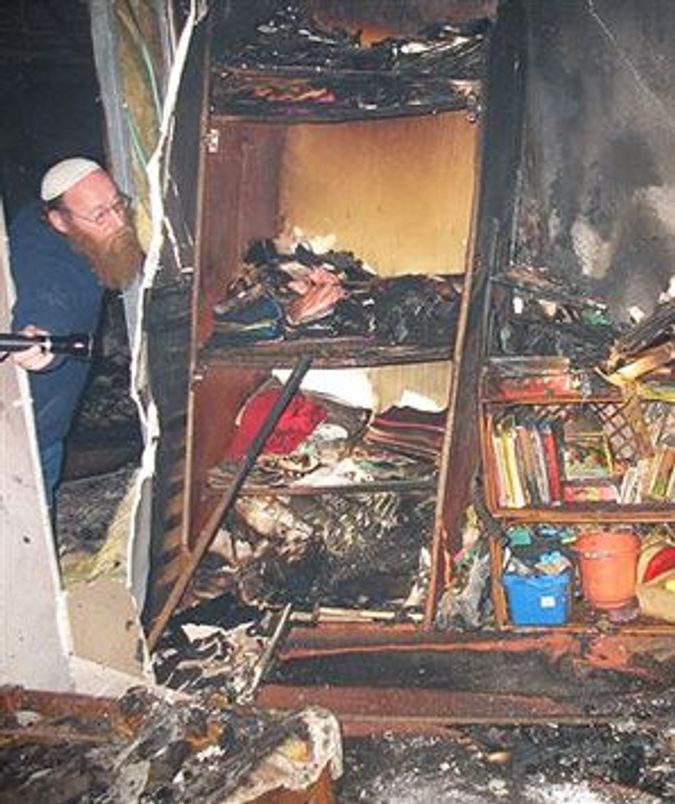 STUDY OF ASHES: A resident of the West Bank settlement of Yitzhar inspects the remains of a house torched by a Palestinian terrorist.

On Saturday morning, September 13, a series of confrontations began when a Palestinian man entered the Jewish settlement of Yitzhar, south of Nablus. He torched a Jewish home that was unoccupied at the time and then stabbed a 9-year-old child. Settlers responded by storming the nearby Arab village where the attacker was presumed to live, reportedly stoning cars and windows and firing at passers-by, several of whom were wounded. A villager captured the rampage on a video that showed Israeli troops looking on without intervening.

The images of Israeli forces failing to protect Palestinians touched off a national debate over settler violence and over the responses by Israeli police and military. Both security services initially disclaimed responsibility and blamed each other for what Olmert likened to a “pogrom.”

“There will be no pogroms against non-Jewish residents in the State of Israel,” Olmert declared at a September 14 Cabinet meeting.

At a stormy meeting of the Knesset’s Internal Affairs Committee on September 15, committee chair Ophir Pines-Paz of Labor said that the West Bank has become “like the Wild West.”

“The picture is one of anarchy,” the lawmaker said.

Among politicians and in the media, there was a strong sense that however reprehensible the settlers’ actions, such attacks are to be expected and should be anticipated by the authorities, given mounting radicalism on both sides.

“According to international law, the one in charge of upholding the law in the West Bank is the army,” said Israel’s leading legal expert on the West Bank, attorney Talia Sasson. “But army soldiers are not interested in enforcing the law among Israelis.” Sasson, a former head of the criminal division of the State Prosecutor’s Office, wrote an important 2005 government report on policy in the territories.

The weekend’s violence began early in the day on September 13 after a terrorist entered the settlement of Yitzhar, considered a stronghold of Kahanists and Chabad messianists. He is thought to have come from the nearby Arab village of Asira el-Kibliyeh.

He broke into the home of the Ben-Shlomo family, who were away. In what Yitzhar residents said was the seventh arson attack by Asira el-Kibliyeh residents in recent months, he burned the home. He tried to break in next door at the home of the Ofer family, but homeowner Roital Ofer shuttered the windows.

When the terrorist then saw 9-year-old Tuvia Shatman walking to the Sabbath morning service at synagogue, he stabbed the child five times and threw him down a ravine. The boy is in now in stable condition at home.

Within two hours of the stabbing, more than two dozen Yitzhar residents entered Asira el-Kibliyeh, reportedly looking for revenge. They allegedly shot into the air and at villagers, smashed windows and destroyed a car. Press reports stated that eight Palestinians were wounded, including two moderately hurt by live fire.

Yitzhar’s community spokesman, Yigal Amitai, admitted in a September 17 interview with the Forward that settlers broke windows and damaged property. “This is correct, natural, moral and shows that Jews are not in galut [exile] but in their homeland,” he remarked.

“We are always prepared to be the attackers, not the victims,” he said.

Police, who as of press time had made no arrests, were not present during the retaliation. Videos filmed by Palestinians on cameras distributed by the human rights organization B’Tselem indicate that soldiers looked on and failed to control the violence.

As most of Israel began to question why the soldiers failed to act, Yitzhar’s settlers launched their own criticism of the army. Their religious leader, Rabbi David Dudkevitch, told Haaretz on September 15 that “the proper and healthy thing” is for “the Israel Defense Forces to be involved not only in apprehending terror suspects, but also in collective punishment, up to the level of reprisals, of the environment that supports terror.”

On the more widespread criticism — that soldiers failed to protect the villagers — the army initially responded to a September 16 Forward query by saying that all matters relating to settlers are under the jurisdiction of the police. But the police claimed that responsibility lies with the army.

Police say the only powers the department has for maintaining law and order in the West Bank devolve to it from the army.

“The authority is the authority of the army,” said police spokesman Micky Rosenfeld. The local press commented that army and police sources blamed each other for failing to control the riot.

A statement later sent to the Forward by the army said that soldiers “successfully drove the settlers out of the Palestinian village” and are always responsible for quelling violence. With 100 soldier complaints against settlers currently under police investigation — though it is not clear what proportion are due to conduct against soldiers and what proportion against Palestinians — “it is baseless to say that IDF soldiers do not take part in the enforcement of laws against public disturbances,” the statement said.

Confusion over who is responsible for controlling settler violence is causing alarm in the Knesset. Extremist settlers “do whatever they want, and no one knows what to do with them, including the establishment,” Meretz lawmaker Yossi Beilin told the Knesset’s Internal Affairs Committee.

Asked who is the “sovereign entity” in the West Bank, Pines-Paz said “the feeling is as though the IDF and the police are playing pingpong, and every side trusts that the other will act in its stead, throwing the responsibility back and forth.”

According to Sasson, the army is shirking its duty to protect Palestinians. It can do so because there is no strong political leadership insisting they be protected.

“The problem is not a legal problem,” she commented. “From a legal point of view, it is clear that the army is obliged to do this. It is a problem of implementation.”

“The change needed is a political change,” Sasson said. “If the government… wanted to bring order in the West Bank, including stopping the violation of law against Palestinians, it could.”

Some human rights activists believe that the problem is simpler to fix. Lior Yavne, spokesman for Yesh Din, said that the military’s upper echelons do accept that the military has a responsibility to protect Palestinians from settler violence. “But we know from being on the ground and from speaking to soldiers that they are just not being briefed on this,” he said.

B’Tselem spokesman Ofir Feuerstein agreed: “Somewhere in the chain of command — I can’t tell you where — this is being lost.”

Others see the problem as more intractable. According to Peace Now general secretary Yariv Oppenheimer, “There is a fear among Israeli soldiers and in the army to confront settlers. They know that settlers can bring more people and more clashes.”

Equally pessimistic was Daniel Schueftan, a Haifa University political scientist who was a senior security adviser to numerous Israeli prime ministers. Schueftan is widely credited with placing disengagement and the separation barrier on the political agenda.

“The army has a problem because it has no authority over Israeli civilians in the West Bank and police is very thin on the ground,” Schueftan said.

But with support for terror strong among Palestinians, and radicalism growing among settlers, “The idea you can do away with it by more law enforcement is too optimistic to be relevant for the Middle East,” Schueftan said. “Maybe if you were talking about Switzerland, it would be different.”

He continued: “This has been happening here for a long time and will continue happening. Little can be done about it. Without a fence and Palestinians on one side and Israelis on the other, this will inevitably, with 100% certainty, continue happening.”