Rift Between Israel and Turkey Puts White House on the Spot 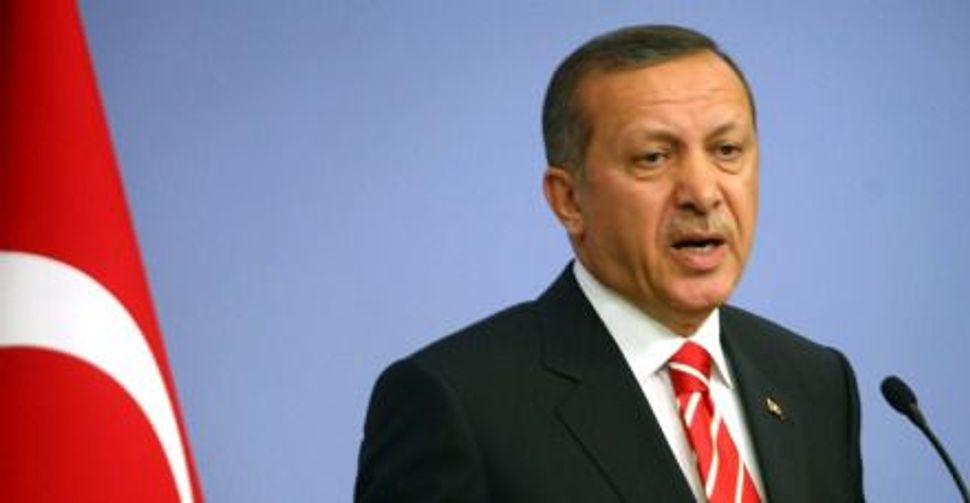 For the Obama administration, no day highlighted the quandary it faces in the downward spiral between Israel and Turkey more than September 2.

In one day, Ankara took a step viewed as crucial to confronting Iran by Washington, and no doubt welcomed by Israel, as well; and a separate step seen as hostile in the extreme by Jerusalem, and hardly less so by Washington.

The move hostile to Jerusalem was, of course, Turkey’s decision to expel Israel’s ambassador. The action came in response to Israel’s refusal to apologize for the killing last year of nine Turkish citizens (including one dual national American citizen) when Israeli commandos met violet resistance during their takeover of the Mavi Marmara, a Turkish ship that was seeking to break Israel’s naval blockade of Gaza.

On the day he announced the Israeli envoy’s expulsion, Turkey’s foreign minister, Ahmet Davutoglu, also declared that his country would appeal to the International Court of Justice to review the legality of Israel’s Gaza blockade.

But for the United States, it was also a day of victory in its relations with Turkey. Celebratory press releases in Washington, Ankara and Brussels announced a new agreement to position a radar system from the United States on Turkish soil as part of a NATO missile shield designed to counter threats from Iran — an interest Israel shares. The radar system will connect to American missile interceptors and is expected to result in the strongest system yet against possible Iranian aggression.

Washington views the radar agreement as but one of a series of Turkish policy decisions that indicate its wish to cooperate with the United States after veering toward Iran in recent years. Relations between Ankara and Tehran have suffered a noticeable chill ever since popular uprisings began in Arab states, and specifically since demonstrations reached Syria. Iran has remained the lone ally of Syrian President Bashar al-Assad, while Turkey, which in the past fostered warm relations with the regime in Damascus, is now openly siding with Syria’s opposition.

Turkey has also revised its policy toward Libya after initially opposing NATO’s operation in support of the Libyan rebels. Now, the Turkish government is fully supportive of the transitional government that has taken over with the fall of Libyan dictator Moammar Qaddafi.

Yet at the same time, Turkish prime minister Recep Tayyip Erdogan has been unremitting in his criticism of the United States for failing to influence its closest Middle East ally and largest aid recipient on how it has dealt with the Mavi Marmara affair. On Sept. 10, Erdogan told the press that in a conversation on the issue with President Obama, he stressed that forensic evidence showed the nine Turks killed on board had been hit by 35 bullets, mostly fired from close range. “I asked President Obama whether the reason he showed no interest in one of his nationals being killed was because [the victim] was [ethnically] Turkish – he didn’t reply,” said Erdogan.

The exchange highlighted the intricate map of interests tying the United States with both Turkey and Israel. And Washington, through open dialogue and back channel diplomacy, has been making a concerted effort to defuse tensions between the two, which have been escalating almost daily.

Among those trying to assist the American effort is Robert Wexler, president of the S. Daniel Abraham Center for Middle East Peace. Wexler has been holding informal talks with representatives of Turkey and Israel in an attempt to reach a solution. Wexler, a former Democratic congressman from Florida, is an ideal candidate for such back channel negotiations. As a key Jewish politician, he established strong ties with Israel’s leaders. As former chairman of the congressional Turkey caucus, Wexler enjoys an open door in Ankara, too.

But his message could sound troubling to Israeli ears, where as the government of Prime Minister Benjamin Netanyahu has turned down calls to apologize to Turkey for the killings on the Mavi Marmara.

Jerusalem is pointing to parts of a long-awaited United Nations report. issued September 1, that set off the latest uptick in Israeli-Turkish tensions. The report found that Israel’s Gaza naval blockade was legal. Further, it supported Israel’s right to enforce the blockade by stopping the Marvi Marmara and other boats that were part of a coordinated flotilla, even though they were was still in international waters. The report also found that when Israeli commandos boarded the Mavi Marmara, they faced “organized and violent resistance” from some passengers and were therefore required to use force for their own protection.

At the same time, Israel has rejected the report’s finding that the force used by Israeli commandos was “excessive and unreasonable.” It has offered no response to the report’s citing of forensic evidence “that most of the deceased were shot multiple times, including in the back, or at close range.” The report also found that the military later abused flotilla passengers that had been taken into custody.

The U.N. report, issued by a special committee chaired by former New Zealand prime minister Geoffrey Palmer, urged Israel to make “an appropriate statement of regret” and pay compensation. It is a recommendation that Israel has rejected — just as Turkey has rejected the report’s conclusions regarding the legality of Israel’s blockade and the violent actions taken by some of the Mavi MaRmara’s passengers.

According to Wexler, in the context of the Palmer report’s approval of Israel’s blockade, an apology from Jerusalem “would not be a sign of weakness, but rather of wisdom and power, since it will lead to an immediate repair of relations.” Wexler stressed the urgency he sees in fixing Israeli-Turkish ties because of the role played by Erdogan, the Turkish leader, in facilitating political change in Syria. “We are on the cusp of dealing a significant blow to Hezbollah and Iran by ending the Assad regime,” he said. “The issue of compensation and apology would be minuscule compared to what is at stake with Syria.”

But pressuring Israel to compromise with Turkey could be difficult for the Obama administration. It was the United States that urged Israel, forcefully, according to senior diplomats, to cooperate with the Palmer committee. Making things more difficult is the last-minute effort, being led by Secretary of State Hillary Rodham Clinton, to thwart a Palestinian move for recognition as an independent state by the U.N. General Assembly. If this effort succeeds, the United States is considered likely to prioritize obtaining Israeli flexibility on the Palestinian front over having Jerusalem compromise on the Turkish issue.

American officials fear that if left to its current trajectory, Turkey’s row with Israel could distract Turkey from its tack toward American positions. Turkish officials even threatened to take the country’s dispute with Israel to sea, as the government of Erdogan decided to beef up its maritime presence in territorial water close to Israel.

“We are concerned,” State Department spokeswoman Victoria Nuland said in a September 6 press briefing. “Our emphasis with both the government of Turkey and the government of Israel is to hope that we can de-escalate, we can defuse.”

But some argue that it would be a mistake to tie Turkish-Israeli relations to the broader policy interests that Washington has with Ankara. “I’m not sure it resounds into other spheres,” said Dan Mariaschin, executive vice president of B’nai B’rith International. Mariaschin is among the Washington Jewish leaders who had close ties with the Turkish government before relations with Israel turned sour. Now, he believes that an Israeli apology could be a dangerous precedent. “If Israel has to issue an apology for all of its security concerns, it will find itself with one hand tied behind its back,” he said.

Rift Between Israel and Turkey Puts White House on the Spot