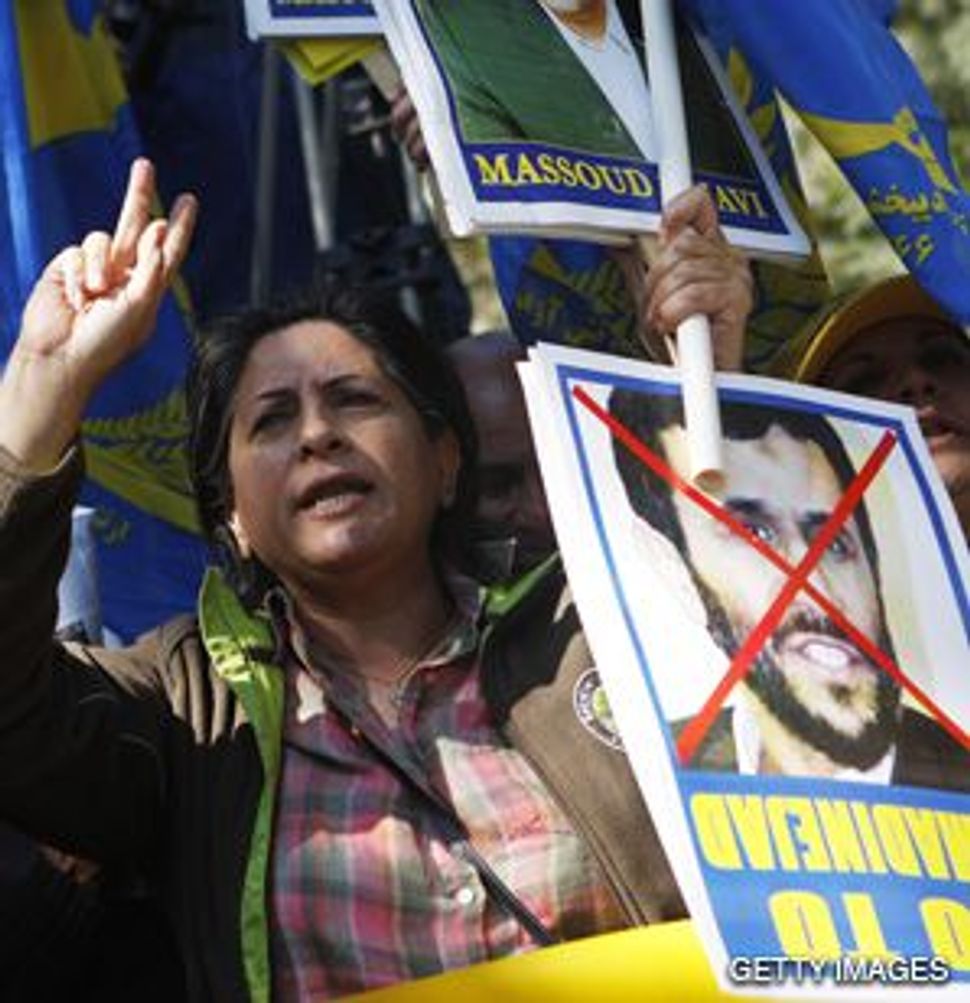 OUTRAGE: Protesters spoke out against Iranian President Mahmoud Ahmadenijad outside the United Nations.

After incurring the wrath of liberal groups for inviting Republican vice presidential nominee Sarah Palin to an anti-Iran rally, Malcolm Hoenlein, longtime leader of the main Jewish umbrella organization in America, is being criticized by right-leaning groups for failing to properly consult them. 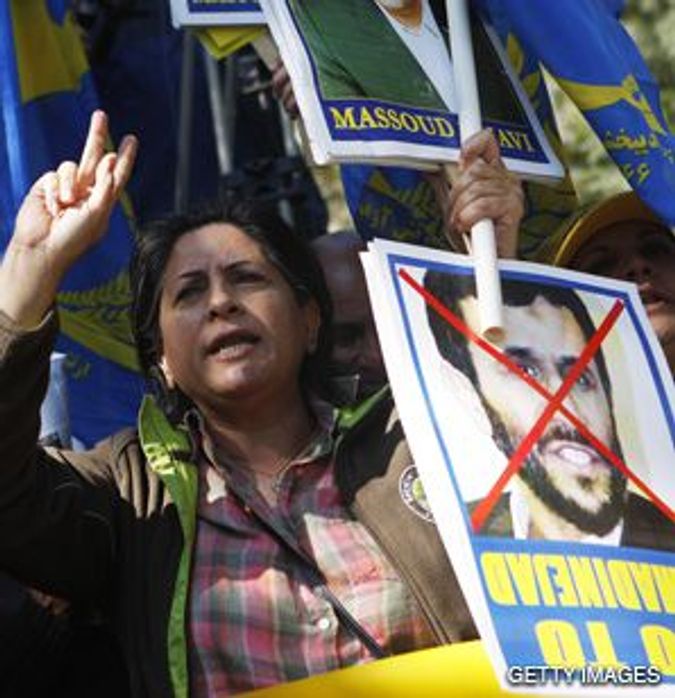 OUTRAGE: Protesters spoke out against Iranian President Mahmoud Ahmadenijad outside the United Nations.

Four hawkish members of the 52-strong Conference of Presidents of Major American Jewish Organizations complained that they had not been asked about the decision to rescind invitations to elected officials from both parties. The invitation to Palin prompted New York Senator Hillary Clinton to pull out of the September 22 rally in New York City and triggered bitter complaints from Democratic activists.

The Presidents Conference organized the protest against the visit by the Iranian president, in coordination with the Jewish Council for Public Affairs, United Jewish Communities, UJA-Federation of New York and the Jewish Community Relations Council.

“There was no emergency call set up to discuss the decision to disinvite Palin,” said Morton Klein, president of the Zionist Organization of America. “I deeply regret that most observers believe the constituent members of the Conference of Presidents agreed to the decision when, in fact, this was not the case.”

Hoenlein did not return queries from the Forward seeking comment.

Over the years, members and outsiders have criticized the Presidents Conference, created in 1956 to provide a common voice to Jewish groups, for its lack of transparency. And Hoenlein, its executive vice chair and de facto leader since 1986, has been the target of many of those attacks.

In addition to the ZOA, the Committee for Accuracy in Middle East Reporting in America, the Jewish Institute for National Security Affairs and the National Council of Young Israel complained about not being consulted over the Palin decision. A former chair of the Presidents Conference who is normally invited to participate in such deliberations told the Forward on condition of anonymity that he had not been consulted.

Other members, however, counter that the Palin issue had been broached during a conference call September 17, a day before the organizers decided to rescind the invitation.

Klein argued that the e-mail he received about the call was just a standard one to discuss the details of the rally.

A copy of the Presidents Conference e-mail announcing the call obtained by the Forward, however, seems to indicate that it was indeed an emergency call, especially given the fact that the controversy around Palin had been swirling publicly already. The subject line of the e-mail sent to members September 17 reads “Urgent notice: rally conference call” in capital letters. The body of the e-mail mentions, in red, “urgent notice.”

Andrea Levine, executive director of Camera, said she had not been on the call and thus not properly consulted. She said her organization had been flooded with an-gry letters protesting the decision to disinvite Palin, and that Camera’s board had asked her to formally request an explanation from the Presidents Conference leader-ship. According to Levin, Hoenlein had told her that the reason for the decision is that the rally’s other organizers had threatened to pull out.

Organizers of the rally tried to dampen reports that it had been on the verge of being canceled before the decision to keep out national politicians was reached. Rabbi Steve Gutow, executive director of the liberal-leaning JCPA, told the Forward that the decision was motivated not by politics but by tax considerations. The organizations feared that having an unbalanced panel of politicians could put their not-for-profit 501(c)(3) status in jeopardy, especially in the final 60 days of the presidential campaign, Gutow explained.

“The tax issue was the most important factor,” he said. “We had lawyers telling us this would violate the tax code. There is no question we would never put our tax status at risk.”

Insiders, however, said that the JCPA and the New York-based organizers had clashed with Hoenlein over his decision to reach out to the McCain campaign without telling Clinton, who had been invited weeks ago, or the Obama campaign. Hoenlein countered that he did so only after Republicans rebuffed his efforts to have a senator attend. Once Palin announced she would be coming and Democratic activists blasted the rally for offering a platform to a candidate running for office, the organizers rushed a letter to the Obama campaign, inviting Democratic vice presidential nominee Joseph Biden to the rally. Biden was not available, and the Obama campaign offered to send Rep. Robert Wexler of Florida as a surrogate. But the organizers felt that this did not provide the proper balance.

“While some misjudgments were made, no one did anything nefarious or wrong on purpose,” Gutow responded. “No one should blame Malcolm in any way.” But for Levine, “it is obvious something went awry and that things should have been done differently.”