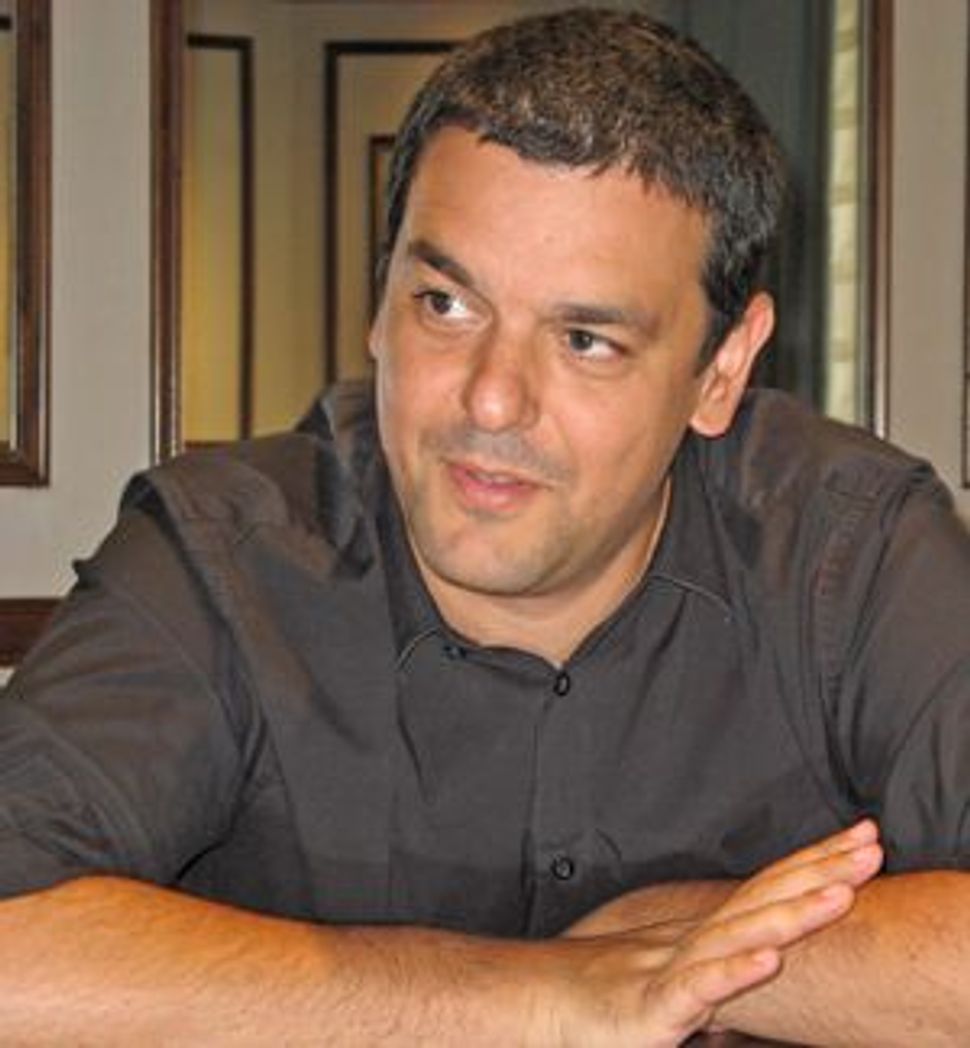 Joann Sfar’s Film “Gainsbourg: A Heroic Life”: An Homage to a French-Jewish Star

French comics artist Sfar, author of “The Rabbi’s Cat” (Pantheon Books, 2005) said, “I was raised by two powerful personalities: my Algerian-born grandfather and Polish-born grandfather. I tried to survive between those two dominant gorillas.” I blinked, and asked him, “Do you mean soldiers or animals?” He replied, “I mean animals.” As a prelude to delving into the underpinnings of Gainsbourg’s film portrayal, by Eric Elmosnino, Sfar recalled, “My grandfather came from Poland in the 1930s, when France needed doctors. He was with the French Resistance. He was to become a rabbi. The family died in the camps, and, by the end of the war he was a nonbeliever. When he died, a master of 10 languages, he [chose to speak] only spoke Hebrew and Yiddish and the only sentence in French was, ‘If God loves you, he does not do this to you.’ 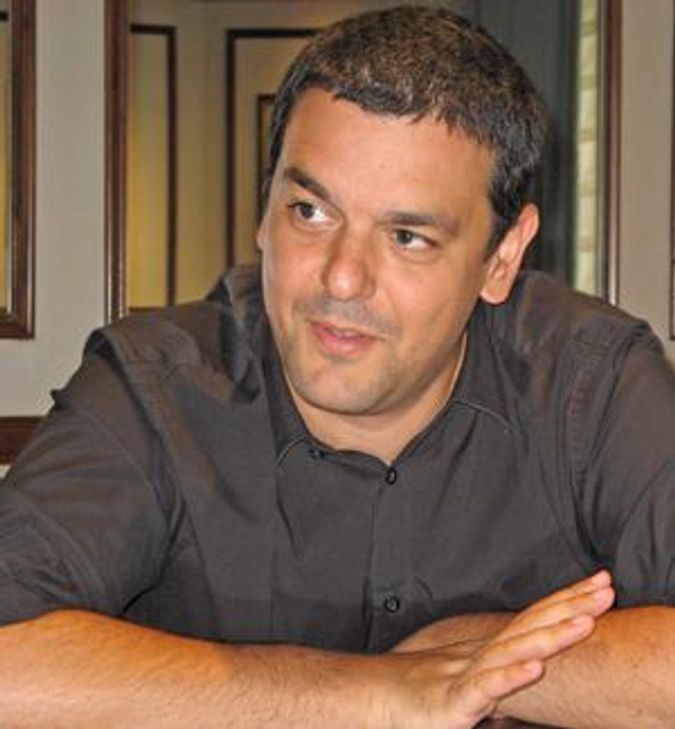 “For two years after my mother died, they told me that she was on a trip and if I behaved, she would return when I was grown up. It taught me that grownups are very good at lying. When they lie to you, it makes you think you are an animal. You belong to the family, but you do not deserve the truth. They took me to the heder, and I became religious just to please my father. If you are with kids who believe in Santa Claus and you don’t want them to be sad, you pretend there is a Santa Claus. That is what ‘The Rabbi and the Cat’ is all about. I never [revolted] against religion, but it never solved any of my issues.”

Returning to the film, Sfar said: “In real life, Gainsbourg said he learned about being Jewish in a very strange way. The [Gainsbourg] family was Russian and poor; was not involved in religion, yet wanted to be more French than the French. When he was 10 years old, the French police caught Serge and gave him a yellow star. He told the French policeman he wanted to be the first one to have it, and the policeman said to him, ‘Are you in such a hurry to get your yellow star?’ and he answered: ‘But sir, this is not mine. It is yours, because you want me to have it.’ And then Serge saw the caricature — a shadow of anti-Semitism brought to life.” Sfar was referring to a poster of a beaked-nosed Jew. Brought to life as an animated character visible to only the audience, it shadows Gainsbourg throughout the film.

“He never fought the cliché; he never fought the caricature,” Sfar said. “On the contrary, he puts this anti-Semitic cliché on his shoulder…. He wanted to be loved. When he seduced ‘sex kitten’ Brigitte Bardot [Laetitia Casta], he wrote his father, ‘You know I am with Bardot.’ It was as if he had been granted a medal of French citizenship…. “Sfar said that he “scandalized the French” when he sang a reggae version of “La Marseillaise.”

I commented that he was able to attract beautiful women., who were portrayed in the film: In addition to Bardot, there was singer Juliette Greco (Ann Mouglalis) and Jane Birkin (Lucy Gordon).” (Birkin, with whom he had a 13-year relationship, is the mother of one of his children. ) Sfar replied: “He was Peter Pan. He had bad manners and was unable to change. He was smart. He was handsome. Today in France he is considered the most French… the most beloved singer!” I told Sfar that by the end of the film I felt as though I had been trapped in a smoke-filled room. “He was forever lighting up Gitanes” Sfar said. “He had been drinking since a child, and could not attend a public show unless he was drunk. He considered his face to be ugly and his hands to be beautiful. [which is why] he kept lighting cigarettes. ‘Smoking will help make me handsome,’ he’d say.” Sfar paused. “France has changed. They are now proud that there was this reggae ‘Marseillaise.’”

At the end of the interview, Sfar joshed, “When I did comic books, my father said, ‘You should go back to the university.’ I said, ‘No, I want to make movies.’ He said: ‘Movies will not last forever. Stick to comic books.’”

“The Hedgehog”: A Piercing Film About the Unpredictability of Love and Life

A catalyst for my seeing the unforgettable, award-winning French film “The Hedgehog” (“Le Herisson”) based on Muriel Barbery’s New York Times bestseller “The Elegance of the Hedgehog” (Europa Editions, 2008), was Prima, an African pigmy hedgehog that my family had as a pet. The film’s epicenter is the riveting Renee Michel (Josiane Balasko), a frumpy, secretive concierge who manifests an emotional defense system akin to that of a hedgehog’s prickly armor. But Renee is transformed by the gentle attention of Kakuro Ozu (Togo Igawa), a Japanese tenant in the upscale building she services. Camcorder in hand, 11-year old Paloma (Garance Le Guillermic) — another tenant — plans on committing suicide once she completes chronicling what she views as her parents’ meaningless lives. During her film explorations, Paloma discovers Renee’s secrets. A shattering ending underscores the well-worn proverb: L’homme propose, Dieu dispose (Man proposes, God disposes).

During my August 27 conversation with “Hedgehog” director Mona Achache, who telephoned me from Guadalupe, she defined the movie’s unexpected ending as “a life for a life,” adding: “For me it was a happy ending — the desire to live. It has to do with how we see and what we make of random events.” When I asked her about Paloma’s detached parents — her mother (Sarah Le Picard), “who talks to plants” and father (Wladimir Yordanoff) “who is just not there”—Paris-born Achache, who told me her grandmother was from Vienna and her grandfather was from Morocco, explained: “In France, a lot of children are distant from their parents…. Paloma’s greatest fear was that she would become like her parents.”