Ritual Ramadan Dinner Becomes an Opportunity for Muslims to Reach Out 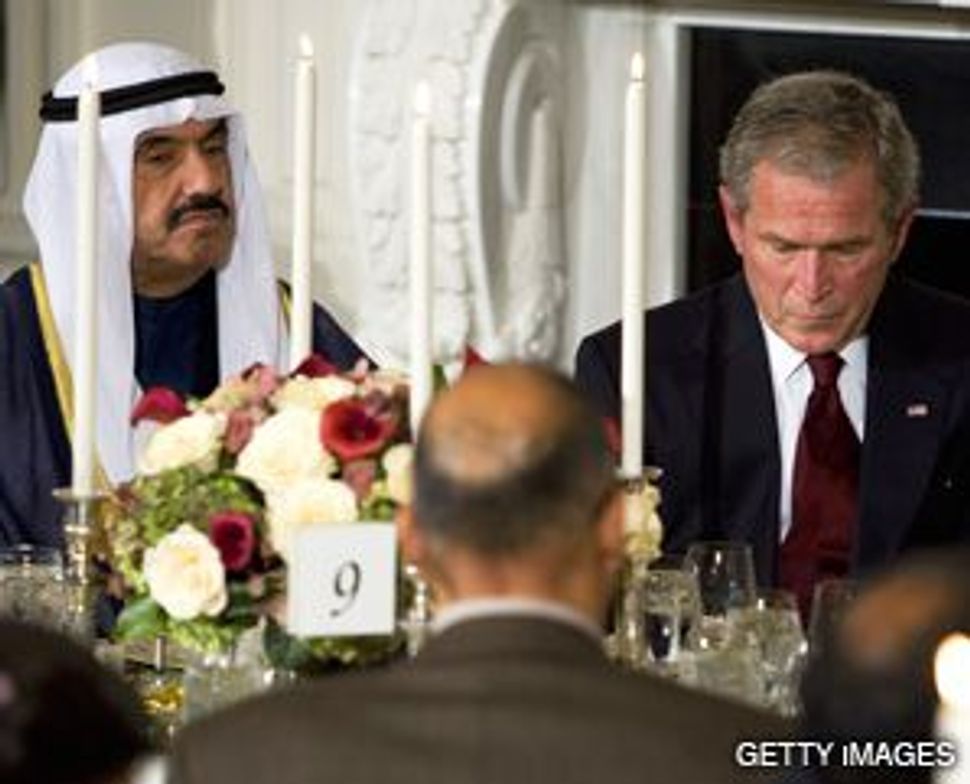 IFTAR: The meal that ends each day of Ramadan fasting provided an opportunity for Muslim leaders to meet with President Bush.

Washington — It has been a busy month for some Muslim Americans. According to Muslim tradition, the holy month of Ramadan is marked by fasting from dawn to dusk, ending each day with a festive meal known as Iftar. According to an emerging American tradition, Iftar is a great opportunity to show respect to the Muslim community. The result: an increasing number of official Iftar dinners held by government agencies, local communities, universities and interfaith groups. 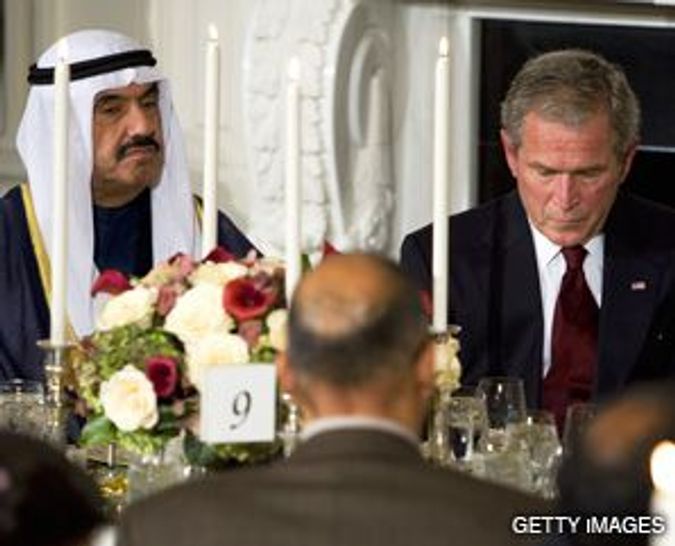 IFTAR: The meal that ends each day of Ramadan fasting provided an opportunity for Muslim leaders to meet with President Bush.

Ziad Asali, who heads the American Task Force on Palestine, has been to three such events already — at the White House, the State Department and the Department of the Treasury. Last year he had to choose between two government Iftar events taking place at the same time.

“It’s become a tradition,” Asali said, “but why not? This country accepts Christmas, it accepts Hanukkah, so why not add Iftar?”

Within less than a decade, Iftar dinners have become a popular way to reach out to the Muslim community at a time when the wars in Afghanistan and Iraq have deepened the need for dialogue. “It’s an easy symbol and a way to show how Muslims are part of the American fabric,” said Marshall Breger, a law professor at The Catholic University of America. “Just as World War II brought the notion of a Judeo-Christian civilization, now we see the emerging notion of the Abrahamic civilization, which includes Christians, Jews and Muslims,” said Breger, who served as an adviser during the Reagan administration.

Official White House Iftar dinners began during the Clinton administration and grew in size during the Bush years. “Over the past eight years, we have made the Iftar dinner an annual tradition here at the White House. And I’m really glad we did,” Bush said when opening this year’s September 17 dinner, even wishing participants a “Ramadan mubarak” — a blessed Ramadan. A week earlier, at the State Department, Secretary of State Condoleezza Rice joked that she had attended several Iftars, even more than one a day.

“Every year there are more events. My calendar is full of Iftar events organized by Americans,” said an Arab diplomat posted in Washington. The diplomat spoke on condition of anonymity to avoid offending American officials. “I’m not sure they know a lot about Ramadan or Islam, but this is a nice attempt,” he added.

“It’s a growing trend, but it hasn’t gotten out of hand,” said David Pollock, a former State Department official who dealt with public diplomacy in the Arab world. Pollock, now a scholar at The Washington Institute for Near East Policy, was among those advocating more engagement with the Muslim world and participated in planning Iftar events at the State Department. In the early years of those Iftars, organizers weren’t sure whom to invite or how to characterize the event. One time, there was even a debate on whether it would be appropriate to decorate the room with photos of women who are not modestly dressed.

Muslim Americans, while somewhat skeptical of this surge in invitations, have welcomed the initiative. “It’s like chicken soup. It can’t hurt,” said Ibrahim Hooper, communications director of the Council on American-Islamic Relations. “Any opportunity for interaction between the Muslim community and government officials is worthwhile, despite its limited scope.”

The Iftar, Hooper noted, does not carry any religious meaning beyond the dinner itself, so it is also a handy platform for interfaith outreach. This has proved controversial at times, as in the Iftar dinner hosted by several church leaders in honor of Iranian President Mahmoud Ahmadinejad.

But more often, Iftar is the impetus for interfaith gatherings that bridge rather than divide, especially on college campuses. At Princeton University, the local Hillel is co-sponsoring a Muslim-Jewish Ramadan Break Fast. Wesleyan University is hosting its second annual Fast-a-Thon and Ramadan Banquet, which is sponsored by several campus groups, including the Jewish students’ organization. And at Duke University, a “Jewish Iftar” took place on the grounds of the Jewish center on campus.

Ritual Ramadan Dinner Becomes an Opportunity for Muslims to Reach Out