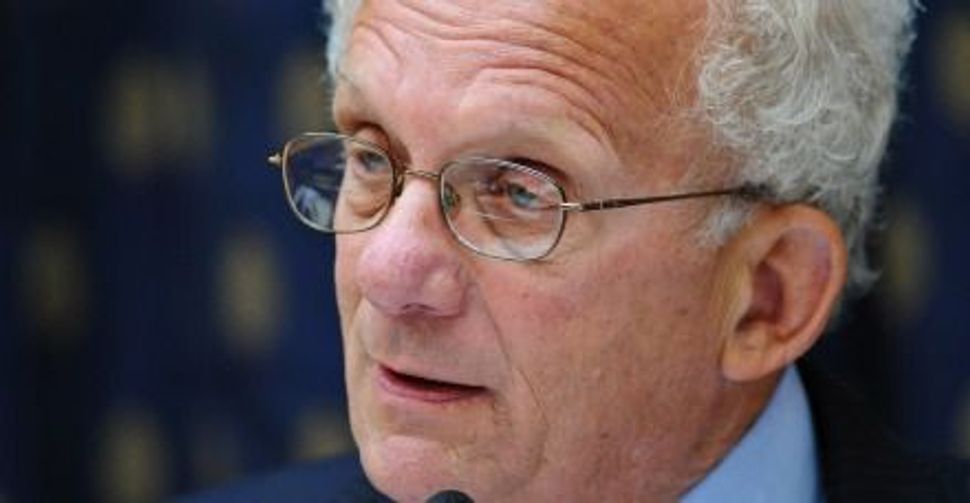 According to one of its contenders, the fight to represent the newly redrawn 30th congressional district in California’s San Fernando Valley may be framed as a peculiarly Los Angeles kind of class struggle: rich Hollywood Jews versus working folks in the Valley. 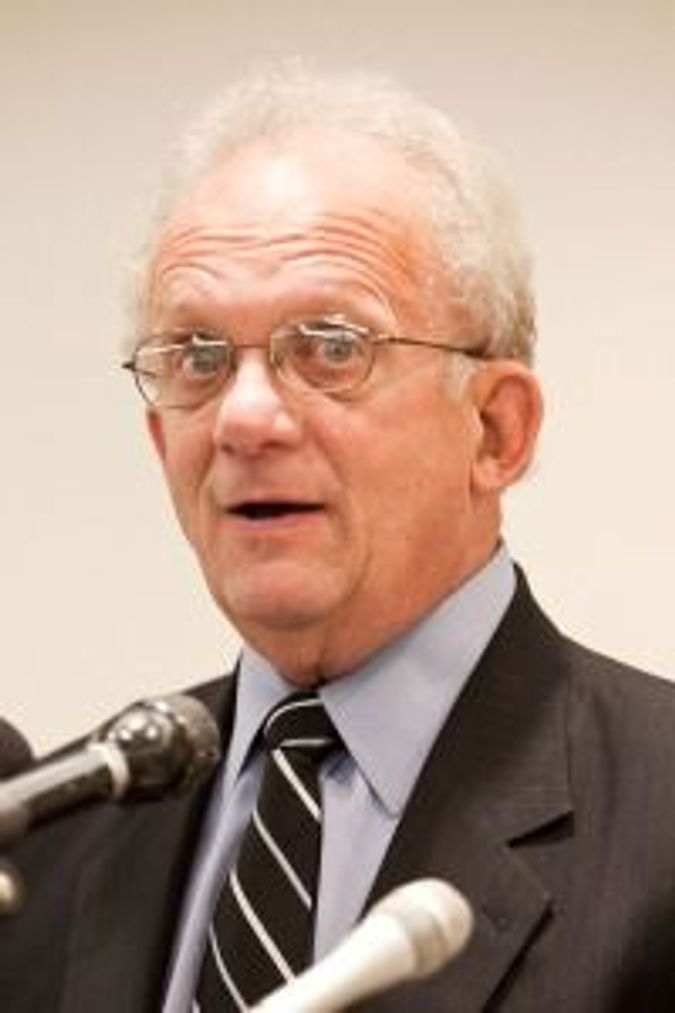 “This whole race is a Valley thing,” Rep. Brad Sherman told the Forward in an interview September 4. “There is a Beverly Hills-centered Jewish community that has a lot of money and power that is less aware of my efforts, because there is a lack of respect for the San Fernando Valley. And the Valley is aware of this.”

In most circumstances, a candidate taking a populist line against wealthy Hollywood Jews would soon be hearing from the Anti-Defamation League. But in this case, Sherman’s phone is unlikely to ring. He is himself seen as one of the most influential Jews in Congress. And so, for that matter, is his opponent, Rep. Howard Berman.

The two Democrat House members are running against one another as a result of the constitutionally required redrawing of congressional districts that takes place once a decade after the completion of the national census. In California, the California Citizens Redistricting Commission, a nonpartisan body, did away with two districts covering different portions of the San Fernando Valley that were represented by Sherman and Berman, respectively.

Now, the two Jewish lawmakers are pitted against each other within the borders of the new 30th, whose redrawn boundaries give the Valley’s increasing Latino demographic a greater voice at the polls. The winner of their Democratic primary, scheduled for June 2012, is considered all but certain to win the November general election, given the district’s heavy Democratic tilt. 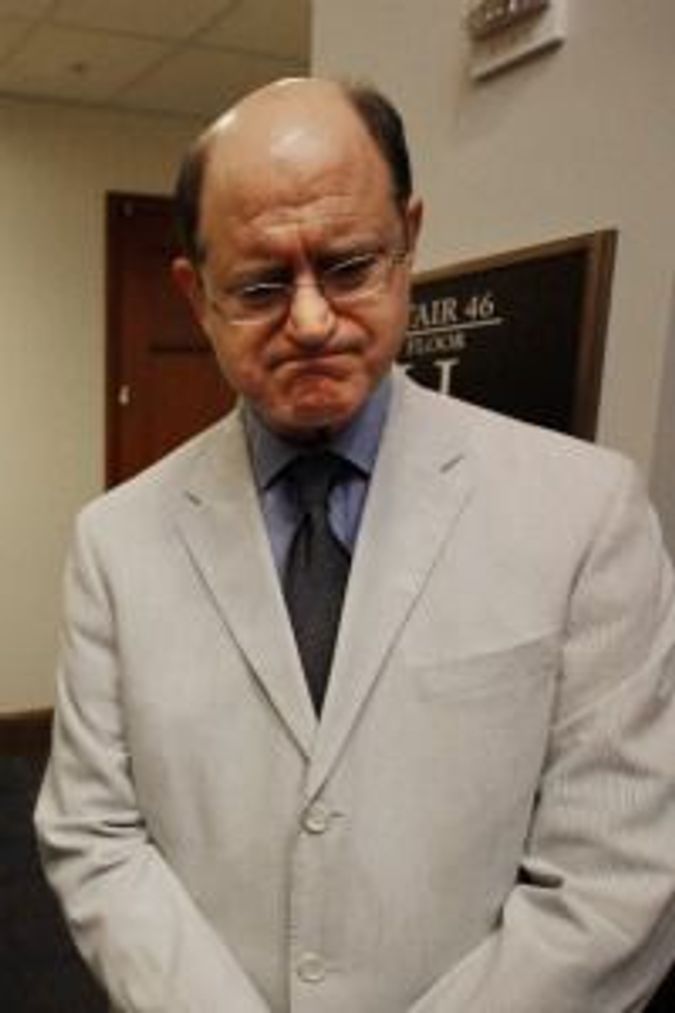 For his part, Berman dismisses his rival’s stab at populism. He is happy to brandish the support he is receiving from such Hollywood luminaries as Jeffrey Katzenberg, David Geffen and Steven Spielberg. Indeed, the DreamWorks Studios triumvirate has announced a fundraiser in November at the Beverly Hilton, at which Berman hopes to raise at least $1million for his campaign. But Berman, the ranking Democrat on the House Committee on Foreign Affairs, believes that his record as a stalwart supporter of Israel, proponent of immigration reform and advocate for intellectual property protection internationally will rally the Jewish, Latino and entertainment industry constituents who make up the majority of voters in the district.

“This is a jobs issue for the San Fernando Valley,” he told the Forward, touting his leadership on intellectual property rights issues, which has endeared him to the Hollywood elite that Sherman seems to scorn. The same issue, he said, will also play well in the Valley, where many residents depend on the film industry for their livelihood.

Sherman, an attorney and CPA, counts real estate interests, as well as law firms and CPAs, naturally, among the major contributors to his campaign. Records show he has raised nearly $1 million during the current election cycle and has about $3.7 million in cash on hand.

Sherman built up much of his war chest over the years, during which his spending on re-election campaigns was minimal. First elected in 1996 in his heavily Democratic district, he has run virtually unopposed until now. His campaign funds include $500,000 in capital gains, the former accountant is proud to point out.

Support from Hollywood is a key strategic element for Berman, who currently trails Sherman badly in campaign funds. Media businesses count heavily among his contributors (Time Warner Inc., Viacom, the Motion Picture Association of America) as well as the labor unions whose members toil in the media business (Directors Guild of America, the International Alliance of Theatrical Stage Employees). As of June 30, when the most recent campaign reports were filed, Berman has about $1.5 million in cash, one-third of it raised in the current cycle. Some observers estimate that the two will spend a total of $10 million by the time the Valley dust settles.

Israel and the nuances of the contenders’ support for the Jewish state will surely play a part in the race. Both men are members of the Foreign Affairs Committee. As committee chairman, Berman has condemned the United Nations-sponsored Goldstone Report, which found that both Israel and Hamas, the group controlling Gaza, committed war crimes in late 2008 and early 2009, when Israel launched a military attack on Gaza in response to Hamas rockets launched into Israel. Berman has also introduced a House resolution opposing a unilateral declaration of Palestinian statehood. But Berman also claims a close relationship with Palestinian Authority Prime Minister Salam Fayyad and met recently with representatives from J Street, the dovish pro-Israel lobby seeking stronger administration involvement in moving the two sides towards a two-state solution.

Sherman met with a local J Street delegation, too, but he has declared, frankly, “I’m an AIPAC guy rather than a J Street guy.”

This statement of support for the American Israel Public Affairs Committee, the mainstream pro-Israel lobby, served to signal voters that he supports Israel with no hint of reservation regarding its policies. He is a firm advocate of the trade boycott of Iran — Israel’s biggest threat, according to Sherman — including blocking General Electric Co.’s bid to repair jet engines in Iran’s commercial jetliner fleet. But as chairman of the House Foreign Affairs Committee until 2010, Berman can also claim credit for having shepherded the Obama administration’s stiff Iran sanctions program through Congress.

Berman, at 70 the elder of the two, has roots in the 1960s. He was, among other things, a delegate to the 1968 Democratic National Convention, where he witnessed the Battle of Chicago. He sees his longtime support of immigration reform, going back to his days on the Judiciary Committee, as counting heavily with Latino voters, who are influential in the new district.

“The vast majority of Latinos who live in the new district live in my present district,” Sherman countered. “They overwhelmingly voted for me in the last five elections, and the polls say I’m extremely popular among them.”

Now 56, Sherman caught the tail end of the civil rights movement, stuffing envelopes for the local open housing candidate at the age of 7.

“If you’re going to say what’s going to decide the race, it’s going to be who spent the most time listening to people in Reseda and Canoga Park and Granada Hills, Sherman Oaks and Woodland Hills,” Sherman said during his interview, reeling off the names of Valley communities. “Nobody in Beverly Hills knows where Reseda is. That’s the horse race.”

Sherman’s endorsements, headlined by Bill Clinton, include California Lieutenant Governor Gavin Newsom; Michigan Congressman John Conyers, and L.A. County Sheriff Lee Baca. He also boasts a list of more than 150 political and community leaders from every corner of the Valley’s disparate demographic — from its large community of Persian-American Jews to Sikhs, from Latinos to the Tarzana Neighborhood Council, not to mention board members of a multitude of Valley shuls. “Ninety-five percent of my endorsers live in the district, and 95% of them you’ve never heard of,” he said.

Berman says he also has the Valley’s welfare at heart. Citing his work on intellectual property issues, he said, “The Valley is where an enormous number of people work in the movie music industry, computer software, video game, all the tangential industries. All of that depends on the protection framework that allows them to benefit from the creativity of those who write, direct, produce films and music. It’s an export issue.”

But even with Hollywood behind him, Berman acknowledged that “if the election were right now, I would not win.” Nevertheless, he added, “I don’t feel like the underdog, because I think I know how this is going to turn out.”

Sherman’s confidence is equally unswerving: “Everybody in Beverly Hills is convinced I’m going to lose this race, and everybody in Reseda knows I’m going to win,” he said.