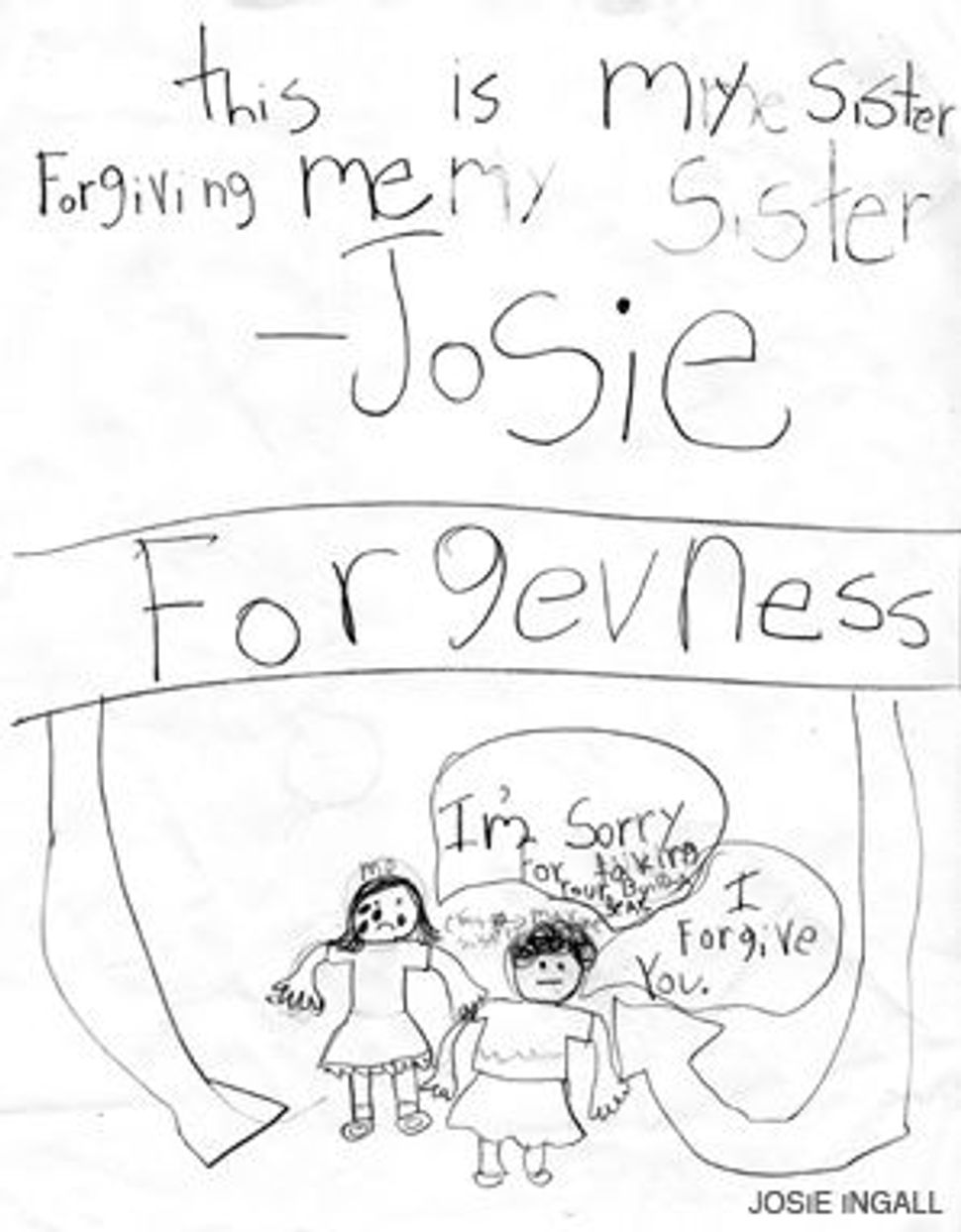 A few days ago, Josie slapped her frenemy. They were playing a board game and there was an Issue about whether the other girl, with whom Josie has the kind of thorny torturous love-hate relationship I didn’t experience with another girl until high school, was cheating. Matters escalated, there was screaming, and Josie hauled off and did a Joan Collins. 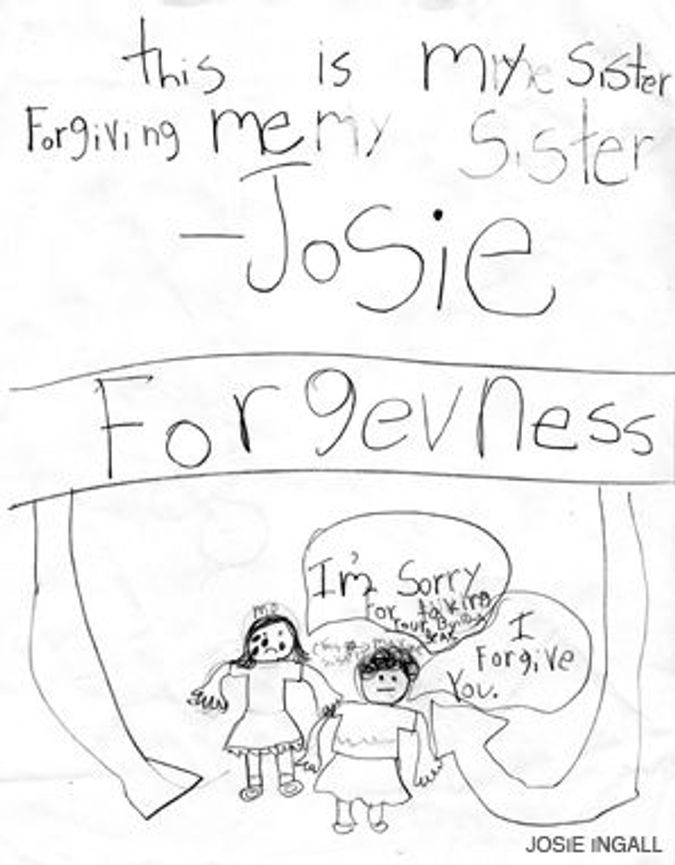 Told by her teacher to write a letter of apology, she wrote, “I am sorry I hit you and I hope I didn’t hurt you SO MUCH. But you cheated. And you never accept apologies anyway. Love, Josie. P.S. You can hit me tomorrow but not too hard.” Her teacher informed her that this was not an acceptable apology; Josie will be having some sessions with the school guidance counselor to help her work on impulse control and anger management.

It seems fitting that as Yom Kippur approaches, Jonathan and I are talking to our 6-year-old about apologies. After the teacher called to fill us in, we sat Josie down and said, “Do you know why we want to have a serious talk?” Eyes huge, she nodded. We told her how disappointed we were, how she needs to work harder at self-control, and how the High Holy Days are our chance to think about what kind of person we want to be and what kind of example we want to set (in her case, for the new first graders in her combined first-second grade class). We talked about turning the other cheek like Martin Luther King, and how to apologize for real, without the “but you deserved it” addendum. Even adults struggle with apologies, we said. (I did not say, because I have such awesome self-control, that Daddy is still working on “I’m sorry” without appending an adjacent dependent clause starting with “but.”) As we spoke, Josie squeezed her eyes shut, turned upside down on the couch, put her fingers gently in her ears and pulled them out, made monkey faces. But she listened.

She comes by her temper honestly: I’m a seether and a stewer; Jonathan’s a yeller. And she’s tightly wound, the way we are. Like us, she’s a perfectionist. She’s obsessed with injustice; she holds herself to an impossible standard until she cracks (and pulls a pint-size Cassius Clay).

That perfectionism is an issue across the board for our Jo. It leads to rigid moralism (the anguished wail of “that’s not faaaair!”), her terror of failure and fury at herself when she’s not the best or when new skills don’t come easily to her. She tends to think she’s only as good as her achievements. And all this stuff ties in with other columns I’ve done on praising kids for effort rather than accomplishment, and the problems that come with labeling kids “gifted.” Voltaire said, “Le mieux est l’ennemi du bien” — the best is the enemy of good. If you’re so freaked out about achieving perfection, you can become paralyzed. You won’t try, because you know you won’t be perfect.

But even our Talmudic heroes are imperfect. Look at Jonah, whose book we read on Yom Kippur, for crying out loud. The guy was so worried about looking bad and being shown to be wrong in front of the Ninevites, he flees from God. Look at Moses, smashing the tablets (and later, a rock) in a rage. In the Jonah story, we see how God forgave the Ninevites for their sins — they weren’t perfect, but they got another chance. In the story of Moses, we see how he shattered the perfect, God-carved Commandments, but was given the opportunity to make another set, himself, with God’s guidance. We learn more when we do something ourselves than when it’s just handed to us. There’s a reason so many great works of literature feature a hero with a tragic flaw. We learn a lot more from, and identify more with, imperfection than perfection.

I recently read a wonderful essay by Susan Handelman, a professor at Bar Ilan University, in an online Chabad magazine called Wellsprings. In the piece, she talked about the difference between perfection and goodness. When God tells Abraham, “Hitalekh lifanai ve’heyeh tamim,” that exhortation can be translated as, “Walk before me and be perfect.” But tam, Handelman writes, doesn’t really mean “perfect.” A better translation might be “innocent, simple, pure, whole-hearted, complete.” God was telling Abraham, “‘Walk before me and be whole.’” Be your elemental self.

I can’t order Josie not to be a perfectionist any more than I can make a scorpion stop stinging the turtle as it’s crossing the river on its back, or however that dang story goes. It’s her nature. But I can, paradoxically, ask her to strive to be her best Josie while accepting that no one is perfect. I can ask her to show patience, tolerance, self-restraint. I can teach her how to apologize, yes, even to people who did wrong, even to people who “never accept apologies.” You still have to do the right thing. (And slugging would be, emphatically, the wrong thing.)

Maxine, incidentally, is not a perfectionist. When she knocks over her milk, writes on the table, smacks Josie, she immediately says, “That’s okay! There’s nothing I could do to make you not love me!” Uh, right. Whenever she wakes up with a wet Pull-Up, she says, “That’s okay! It’s almost dry, and that’s like being dry!” (With this level of self-acceptance, Maxine will be fully toilet-trained by college.) Parenting these two little girls is a lesson in balance. It’s a very High-Holy-Days-reminiscent process of saying, “Hold yourself to high standards” while also saying, “Know that you’re loved no matter what.”

Look, God could have created perfect people and a perfect world, but chose not to. God gave us free will, and God gave us the responsibility of Tikkun Olam, finishing God’s act of creation. As Handelman points out, “Original goodness defines the Jewish conception of humanity — not original sin. We need not convert from being bad to being good, but only return to our innate and original goodness. And that is why ultimately Yom Kippur, though a very serious and reflective day, is also a day of great joy.” We are all possibility.

But of course, that means we have to make conscious choices, all the time. We have to ask for forgiveness and be willing to grant it. To others, and to ourselves.