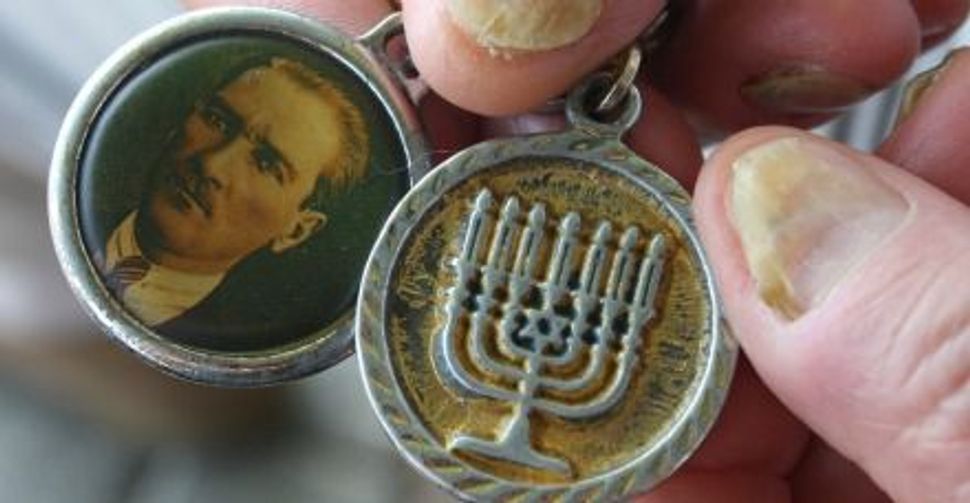 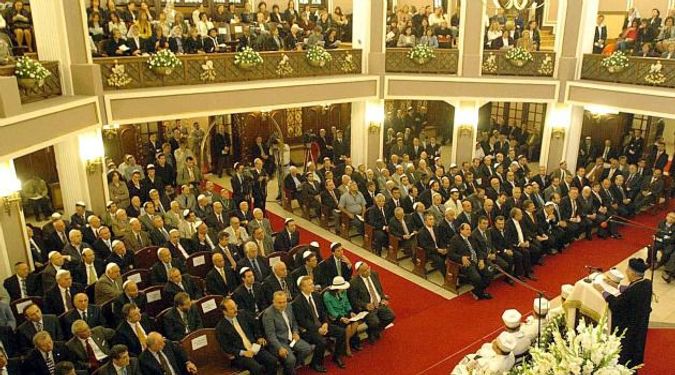 Standing Firm: Turkey?s chief rabbi speaks at Istanbul?s Neve Shalom Synagogue after it was bombed by terrorists. Despite their government?s feud with Israel, Turkish Jews say they still feel welcome in their country. Image by Getty Images

The diplomatic clash between Israel and Turkey may be escalating, but many within Turkey’s 23,000-strong Jewish population insist that it is nothing more than politics for them, with no practical effect on their lives or security.

“In daily life, we don’t fear anything from the Turks,” said Nisya Isman Allovi, manager of the Jewish Museum in Istanbul. But, acknowledging the thick protection her institution and many others in the Jewish community receive, she also said, “Security is, it’s done just to be cautious about everything.”

The targeting of the community over the years by terrorists — albeit by non-Turks — explains the blast-proof doors and X-ray machines found at Turkish synagogues, where outsiders can attend services only after making advanced reservations with the rabbinate. It may also explain the guarded manner in which members of the community responded to questions from the press.

At services held on September 16 at Sicli synagogue, the city’s busiest, one man complained of Turkish anti-Semitism, only to respond that everything was fine in Turkey once he was informed that he was speaking to a journalist. The same scene played out repeatedly: Someone would express apprehension about Turkish attitudes toward Jews, or express no fear whatsoever, while demanding that his or her name not be printed.

One of those Jews, “Haim,” a 76-year-old retiree, said he doesn’t believe that Prime Minister Recep Tayyip Erdogan is an anti-Semite or that he will allow any harm to befall Turkey’s Jews.

“His problem is only with the Israeli government and not the people,” Haim said. “Erdogan won’t let the Jews be hurt, because we’re his citizens, we pay taxes. He’s said this. He just wants to attract Arab support, Arab business and tourism. I don’t believe he hates Jews. It’s politics only.”

Holding a key chain that held a locket with a picture of Mustafa Kemal Ataturk, founder of Turkey as a modern secular state, and a quarter-sized bronze menorah, Haim said that there was nothing for Jews to fear in regard to anti-Semitism in Turkey, but then he asked that his real name not be used. Haim related that his brother was killed in a 1986 terror attack on Congregation Neve Shalom.

Allovi, one of the few Jews willing to speak on the record, said: “The problems between Israel and Turkey are not between the people, they are between the countries. It’s like, if you go to Greece you can drink ouzo and talk to people and be fine, just… don’t talk about politics.”

When asked if young Turkish Jews were inclined to leave the country for Israel or North America once they reach adulthood, Allovi, a 32-year-old Istanbul native, said: “The young Jews usually stay. It’s [Turkey] where I was born, the place I feel the most attached to. It’s also my native language and the food, everything. Most of my friends are Muslim, and I feel that I have more similarities with a Turkish Muslim than, say, a French Jew or a Jew from somewhere else just because they’re Jewish. We grow up together, go to the same schools, watch the same soap operas.”

The Karakoy neighborhood’s Jewish museum, which Allovi administers, traces a narrative of co-existence from the sheltering of Jews expelled from Spain in 1492 through the rule of Ataturk and the founding of the modern Turkish republic. The theme of Turkish tolerance of Jews and Jewish assimilation in Turkey and the Ottoman Empire is highlighted with exhibits that include photos of Jewish soldiers in Ottoman military uniforms, a tallit from 1898 stitched with the crescent and star and a menorah built in the shape of a minaret.

Turkey’s Jewish population has been depleted by decades of immigration to Israel and elsewhere. Today, about 90% of Jews in Turkey live in Istanbul. A small community of about 2,300 Jews resides in Izmir. More than 96% of the community is Sephardi, and Ladino is still spoken widely, especially among the older generation.

The high security at Jewish sites across the country attests to the caution and trauma that remain from several devastating terrorist attacks over the past three decades. On November 15, 2003, trucks carrying explosives slammed into the Neve Shalom and Beth Israel synagogues during Sabbath services, killing 27 people and wounding hundreds. In a previous attack at the Neve Shalom synagogue, in 1986, men from the Abu Nidal terrorist organization gunned down 22 worshippers on a Sabbath morning. Years later, in 1992, a bomb exploded outside the synagogue, causing no casualties.

Taylan Bilgic, a senior editor at the Hurriyet Daily News, the English-language version of the Turkish Daily Hurriyet, spoke of the Palestinian issue as something that stokes strong passions across Turkish society and will continue to be highlighted by players like Erdogan’s ruling Justice and Development party and others who want to enhance their support in the country.

“On the left and right, [from] Muslims to atheists they all have a connection to the Palestinian cause. It’s beyond ideology,” Bilgic said. “You may have primitive Islamists who are trying to utilize this emotional bond for their own purposes, but what politician wouldn’t?”

Bilgic added that he believes that Erdogan and many of his base supporters subscribe to a sort of “primitive anti-Semitism.” It is a sentiment that is not common among Turks generally, he said, but could potentially affect the country’s Jewish community if the tension with Israel worsens.

“If the government manages to make its primitive anti-Semitic ideology take root in society, it could spill over on the Jews here, but I don’t think it will. It depends on Israel and what Israel agrees to do about the Palestinians,” he said.