Cool and Dashing, Paul Newman Was a New Kind of Jewish Star 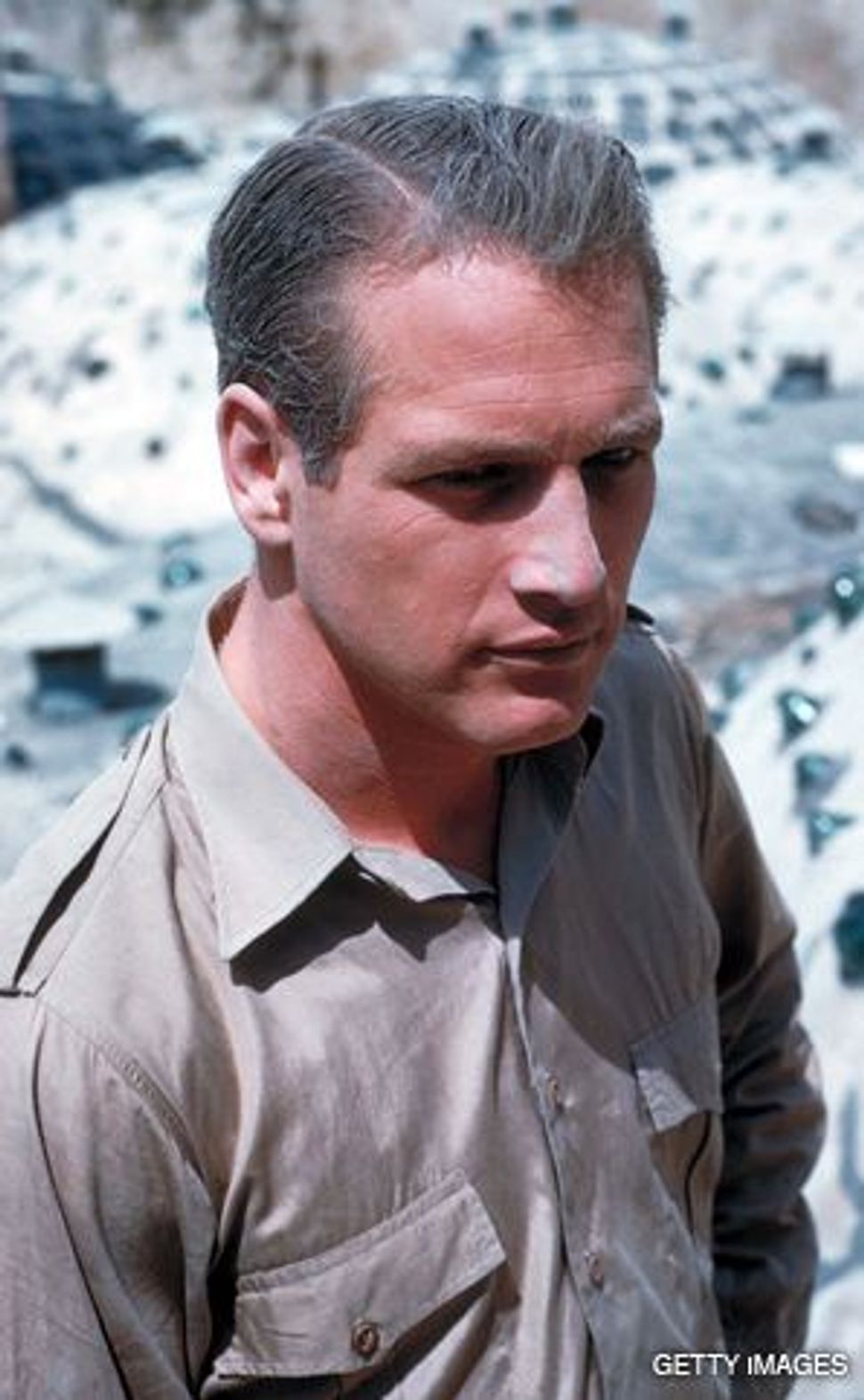 While in high school in the early 1960s, my older brother bore a fleeting, flattering resemblance to Paul Newman. 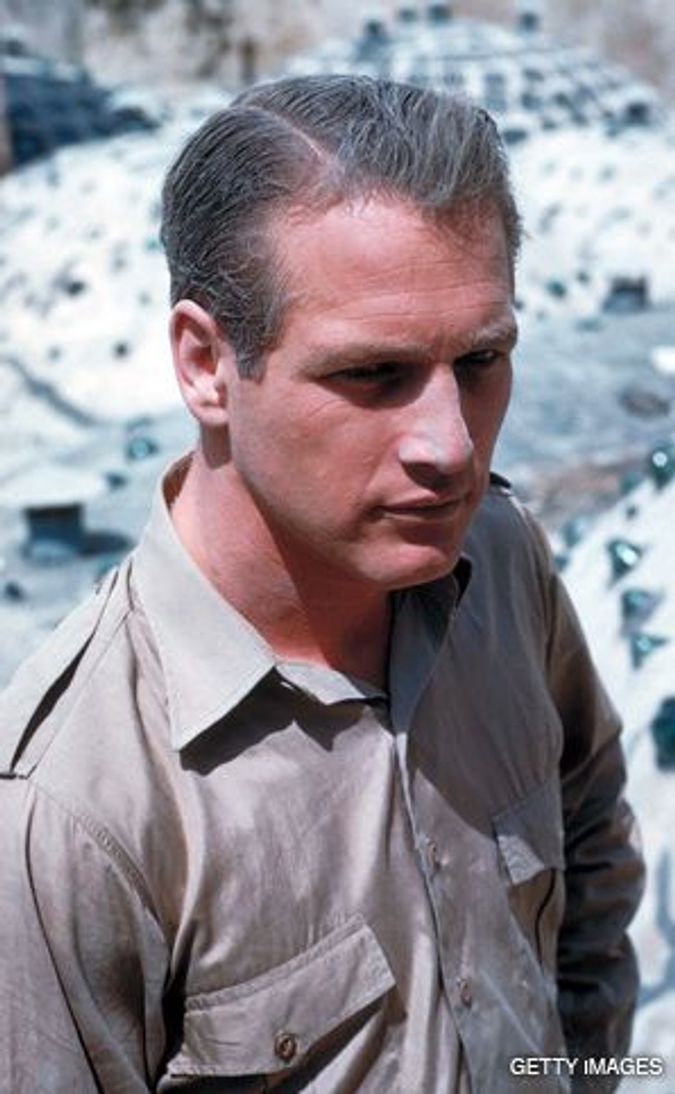 But there was something else, something subliminal, in my own prepubescent idolatry of Newman (and, by extension, of my jazz sax-playing brother).

I grasp it only now, in the wake of Newman’s death September 26, at 83, from cancer. For me, the actor exuded a quintessentially modern, fully assimilated, American male Jewishness — a dashing, misfit bravado, quite unlike the Old World immigrant Yiddishkeit of my Russian and Polish elders, yet familial nonetheless.

Of course, he was a gorgeous hunk whose screen-searing charisma attracted fans worldwide and stoked a 50-year acting career. from his lesser, early films (“Until They Sail”), to his defining, Oscar-nominated roles (“Hud,”

“The Hustler”), to his superbly crafted autumnal turns (“The Verdict” and “Nobody’s Fool”).

It is also true that Newman, unlike my brother and me (but like many of our peers), was technically half-Jewish. His father, a Cleveland storeowner, was a Jew; his mother, a Catholic. Yet, he always identified himself as a Jew because, he once declared wryly, “it’s more of a challenge.”

Indeed it was, in a 1950s and ’60s America still rife with “Gentlemen’s Agreement”-style antisemitism. And it was, as well, in a Hollywood Dream Factory run by studio moguls whose movies often stereotyped their Jewish brethren — or ignored their existence entirely.

Austrian-Jewish director Otto Preminger reportedly cast Newman as a Zionist rebel in “Exodus,” the epic 1960 film based on the popular Leon Uris novel, because he wanted a star of Jewish descent “who didn’t look Jewish.”

He got it wrong. To me, the guy starring as the brave sabra Ari Ben Canaan, who defies the British to smuggle 600 Holocaust survivors into Palestine, was undeniably a member of my tribe. After all, he looked like my brother.

I think Newman’s stint in “Exodus” also helped me (and other baby boomers) cope with the graphic awareness of Nazi butchery that our traumatized, well-meaning Jewish elders drummed into us to ensure that we’d never allow another Holocaust. What were the unintended side effects of those gruesome documentaries about the Nazi death camps I saw at a tender age, in Sunday school? Recurring nightmares of mounds of skeletal Jewish corpses. And my first acrid taste of survivor’s guilt.

No wonder seeing Newman play Ari in “Exodus” felt liberating. Here was a strong, dashing Jewish hero, a modern Technicolor Moses, defying authority with cool aplomb to save his people.

Certainly the film oversimplified historical complexities. But to an impressionable little girl inundated with images of Jewish victimization, Newman’s performance was a blast of righteous vigor and a great rallying cry for the support of Israel.

Newman was none of those. He walked like he owned the earth. He oozed raffish charm. And even if most of the defiant misfits, rebels and outsiders he tended to play were not specifically Jewish, they resonated with my own sense of otherness and estrangement growing up in a Midwestern hotbed of evangelical Christians.

I was also drawn to, and inspired by, Newman’s genuine off-screen commitment to social justice, his own brand of tikkun olam — even if he never called it that.

The 1930s idealism of such earlier Jewish film celebrities as John Garfield was cast under a toxic cloud by the McCarthy era of Hollywood blacklisting. But Newman, with Marlon Brando and other postwar stars, helped shake up American culture in the 1960s by using his fame to promote causes I was passionate about, such as civil rights (Newman marched with Reverend Martin Luther King Jr. in Alabama) and the movement against the Vietnam War (he was a delegate for anti-war candidate Eugene McCarthy at the 1968 Chicago Democratic National Convention).

Surely there was also a large dollop of plain old celebrity idolatry in my attraction to Newman. But as his heartthrob status faded, I continued to admire his ongoing devotion to humanitarian causes. His artistry as an actor, and also as a director (of such films as “Rachel, Rachel”), seemed to be enriched by his mitzvahs, including his stewardship of Newman’s Own, a food empire he founded that has donated $250 million in profits to charity.

With his death, my generation of Jews has lost more than a movie star. I know that I lost a distant member of my extended Jewish family — someone who, in ways he could never have imagined, helped me affirm who I am.

Misha Berson is a theater and arts critic for The Seattle Times and is the author of several books about theater.

Cool and Dashing, Paul Newman Was a New Kind of Jewish Star