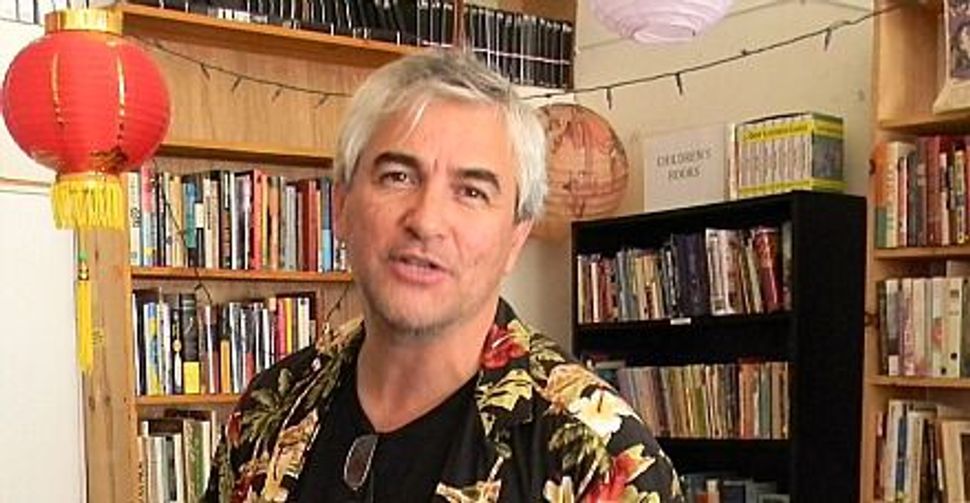 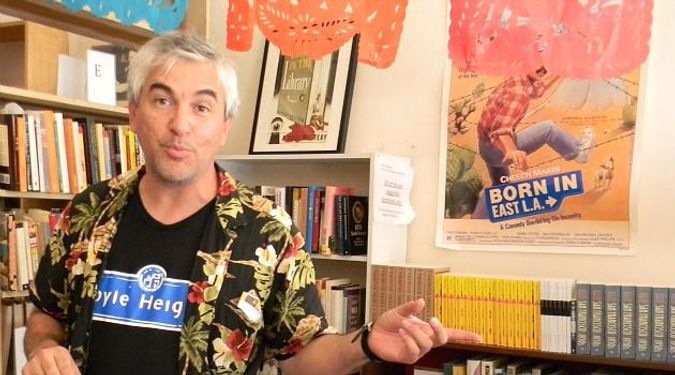 Bookstore, Schnookstore: Owner David Kipen opened his bookstore in an out-of-the-way corner of Los Angeles. He named it Libros Schmibros to symbolize his efforts to bridge Jewish and Latino culture. Image by Gordon Haber

At first glance, the location seems inauspicious — one of those lonely Los Angeles corners, hard by the freeway, where nothing much happens. Actually, many Angelenos feel similarly about the whole neighborhood. They’ll tell you that Boyle Heights is “Mexican,” and that’s the beginning and end of their curiosity.

But David Kipen ⎯ a writer, book critic and former director of literature for the National Endowment for the Arts ⎯ is atypical. For example he’s one of the few Jews in recent memory to move to Boyle Heights, an area better known (among those who know their L.A. history) for the precipitous post-World War II decline of its Jewish population.

In 2009, Kipen’s stint at the NEA was winding down, and he had decided to return to his hometown. He had important decisions ahead of him: where, exactly, to live and what to do next with his professional life.

Then he stumbled onto Boyle Heights. “I rode the Gold Line extension when it opened, because I’m a transit geek,” he said, referring to the project that brought the Metro Rail system to East L.A. “I kept coming back and falling more and more in love with the neighborhood. Then, the branch library posted closing dates for Mondays. And I started thinking, ‘I’ve got thousands of books, and I’m in this neighborhood that’s about to have even less access to books, maybe I could do something.’”

In 2010, Kipen opened Libros Schmibros, a lending-library-slash-bookshop. The store reflects a combination of its founder’s sensibilities and local tastes: It’s packed with books, many in Spanish, and there’s a Californiana section, one of Kipen’s particular interests. There are paper lanterns and a Bob Dylan poster and another of “Born in East L.A.,” Cheech Marin’s 1987 comedy. When I visited on a recent morning, Catherine Fryszczyn, a volunteer, had to cut short our conversation because she was about to be interviewed, by cell phone, for a job in Vilnius, Lithuania.

“What a coincidence,” a visitor said. “That’s exactly what I did this morning.”

In short, the place is charming. And due in no small part to Kipen’s unrelenting boosterism, Libros Schmibros has made its presence known beyond Boyle Heights. One notable example: This fall, Kipen is the artist-in-residence at the Hammer Museum, some 15 miles across town. His project is a Westside outpost of Libros Schmibros that will be at the Hammer until October 9.

The collaboration is meaningful to Kipen for a number of reasons. One is that in Westwood, too, the access to books is declining.

“I was a Westside kid,” he explained. “I am the reader and writer I am because there used to be a half-dozen bookstores within a couple of blocks in Westwood Village. Good ones. Six months ago, they lost their last two.”

His second reason is more complicated. “I’m against the Balkanization of my hometown,” he said. “Yes, mission one of Libros is books. Mission two is creating a kind of crossroads where the Westside and the Eastside can drop their passports. I love this city, and it’s in a world of hurt right now. The bifurcation — partly imposed by traffic and partly by mutual incomprehension and suspicion — is not helping anybody.”

Kipen — who, at 48, still projects a relaxed, West Coast version of boyish enthusiasm — is at his most enthusiastic when discussing how Libros Schmibros can erase these false borders.

“It’s really cool when a neighborhood kid curls up in the corner with a book,” said Kipen. “You hope that you’re seeing a kid become a reader. Or when a friend from Santa Monica comes across town and likes the neighborhood. Then, the other day, a kid came in looking for a book his teacher told him to get, and a little later an older white guy wandered in. I look over and I see them bonding over a copy of Art Spiegelman’s ‘Maus.’”

And what of the name of the store? It’s very Kipenesque, in that it’s a joke that reflects something actually quite complex. Yes, these days, Boyle Heights is predominately Latino. But along with African-Americans and Japanese-Americans, it used to have a significant population of Jews. (In the 1940s and ’50s, new residential developments in the Fairfax district and the San Fernando Valley lured most of the Jews away from Boyle Heights.) Thus, Kipen wanted a name that acknowledged “the Boyle Heights of my grandparents’ generation” as well as the neighborhood that it is now.

“So I thought, libros, Spanish for “books,” and then Yiddish, right? Schmibros.”

Kipen and his store have been received positively. During an early trip to Boyle Heights, he dropped into the office of the local independent newspaper. He was concerned that he might be perceived as “the leading edge of gentrification”; instead, they gave him coffee. When Kipen and I went to lunch, he was greeted warmly by the proprietor of the pet shop across the street, as well as by a customer preparing to bicycle away with a giant bag of bird seed on the handlebars.

Over tacos, Kipen did mention one small spot of discomfort: “Not long after I got here, people would say, ‘He’s the Jewish guy on the corner with the bookstore.’ It’s weird a little to be so identified.” He shrugged. “But what the hell, I’ll take it.”

Kipen also made sure to point out that in Boyle Heights, the ethnic divisions weren’t always so pronounced.

“All the people who couldn’t live west of Western Avenue because of restrictive covenants came here and eventually got to like each other,” he said. “You hear these amazing stories of these Japanese families rounded up and sent to Manzanar [an internment camp for Americans of Japanese descent during World War II] and their Jewish neighbors and Mexican neighbors basically looking after their houses. That’s what this neighborhood means.”

Kipen’s great gift — aside from his tireless promotion of literacy — is his ability to remember such things. And to inspire others to think twice about their city. Later, I would learn that Cesar Chavez Avenue, where we had our lunch, was until 1994 called Brooklyn Avenue — a name chosen in the late 19th century to lure New York Jews to the neighborhood.

But at the moment, I was listening to Kipen.

“The old Boyle Heights could be a kind of emblem of what L.A. could yet be,” he was saying. “I believe that deeply.”