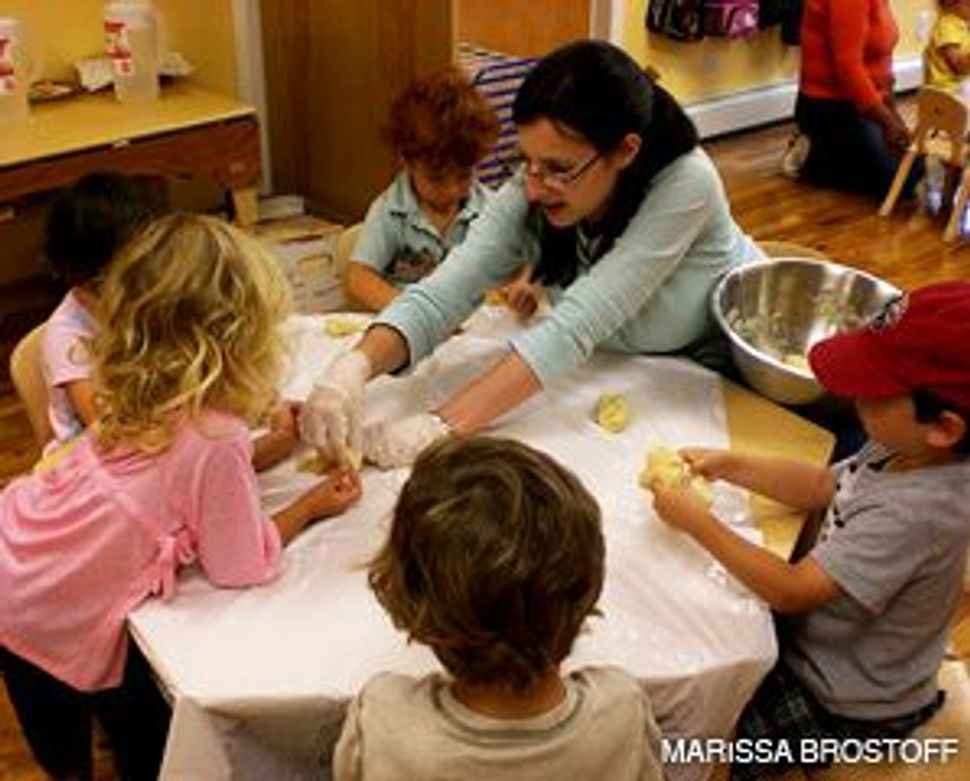 On a recent Friday morning at a new Jewish preschool in Brooklyn, the women in pants handed their children over to the women in long skirts before heading off to their jobs at as documentary filmmakers and Web designers. 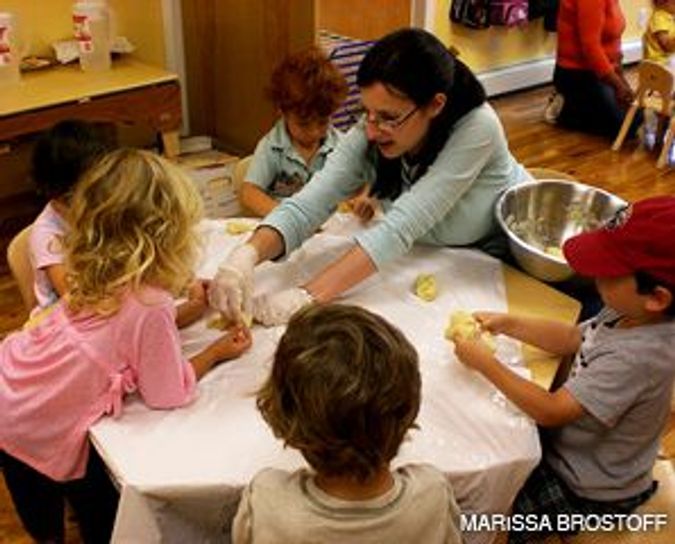 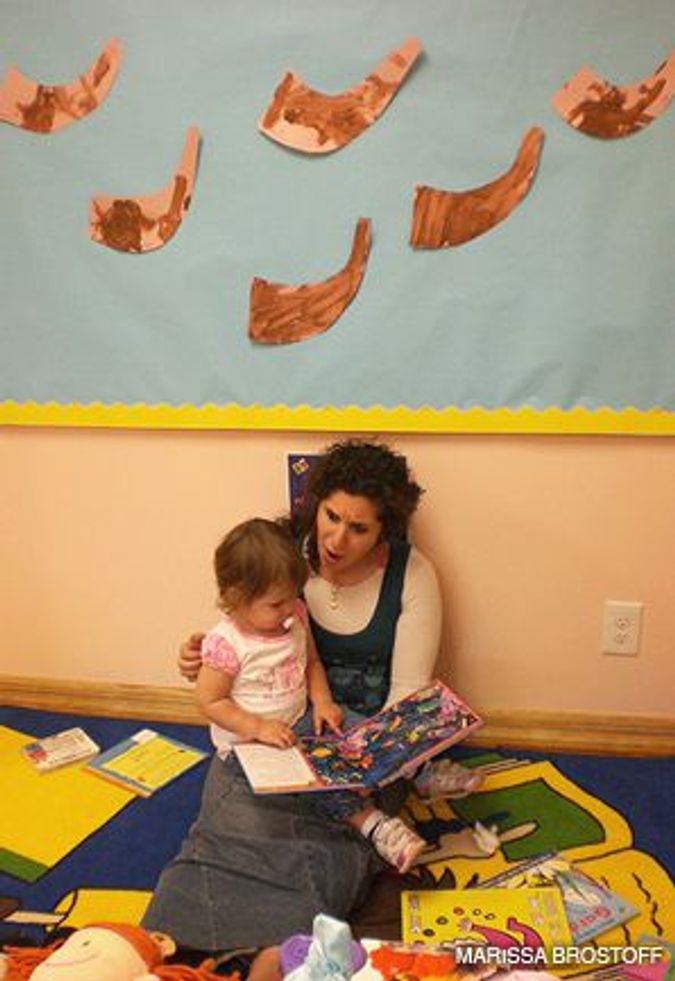 EARLY LESSONS: A teacher at Brooklyn?s new Chabad preschool reads to a student from the neightborhood.

The school, Chai Tots, is run by Chabad Lubavitch, the ultra-Orthodox movement that caters to unaffiliated Jewish families. The divergent clothing choices evident during the morning drop-off were only the most obvious sign of the religious disconnect between Chai Tots’ teachers and the families they serve in the leafy neighborhood of Windsor Terrace.

There are 154 such Chabad preschools nationwide, around 70 of which have opened in the past six years, according to Nachum Kaplan, national director of Chabad’s education arm. These schools epitomize the premise on which Chabad has become an enormous international movement: If you offer cheap, convenient religious and social services, the non-Orthodox Jews will come.

Chabad’s willingness to provide these services coincides with the shortage of preschools in the Brooklyn neighborhoods around Prospect Park, which have rapidly become a hub for young families. But that burgeoning population is also known for its liberalism and secularism, and so Chai Tots’ three campuses provide a kind of Petri dish in which to observe the conversation between the Chabad movement, where the teachers come from, and the secular families who use its services.

“We don’t advertise as Chabad, because there’s a stigma,” said Shimon Hecht, a Chabad rabbi in Park Slope and half of the husband-and-wife team that runs Chai Tots. “People hear ‘Chabad,’ they’re afraid. There’s nothing to be afraid of.”

This stigma may be especially strong among secular families in Brooklyn, because the neighbor-hoods adjacent to Prospect Park abut large, visible ultra-Orthodox communities — including Chabad’s world headquarters in Crown Heights.

“The Brooklyn parents are much more resistant to the outreach of someone who’s a religious person” than are secular parents in areas with less widely varied Jewish populations, Kaplan said. “It’s more of an issue there, because of the mix.”

Chai Tots’ campus in Park Slope, its first and largest, is located in the basement of an apartment building across the street from Prospect Park, directly below the spacious apartment where Hecht and his wife, Sara, live with the younger members of their 12-child brood. The school evolved from a Mommy and Me group that Sara started in her living room 23 years ago; a second campus, in the adjacent neighborhood of Prospect Heights, opened last year. The Windsor Terrace school is the newest addition.

Greater New York’s Board of Jewish Education says that among the 55 or so Jewish preschools in Brooklyn, most are associated with Orthodox yeshivas rather than with Reform or Conservative congregations. That leaves an opening for Chabad, which, because of the piecemeal way it runs its operations, has the flexibility of opening preschools wherever they are most in demand, rather than having to affix them to pre-existing synagogues or Jewish community centers.

“I looked at tons of schools,” said Gayle Benno, a Conservative Jewish preschool teacher who recently enrolled her 18-month-old at the Windsor Terrace campus. “They were all secular, besides this one. I didn’t find any Jewish schools in my neighborhood.”

Chai Tots goes to great lengths to distance these schools from their ultra-Orthodox founding spirit. The school’s Web site features testimonials from parents like Helen Shankman, who wrote: “I was sure I would see little girls in long dresses, boys with long side-curls in dark pants and white shirts. To my surprise, I found kids named Dylan, Lindsey and Zoe.”

At Chai Tots’ graduation ceremonies, said Rory Bernstein, the mother of two girls at Chai Tots’ Brooklyn campus, it has become de rigueur for a parent to speak about “how they were really scared to send their kids to this school, because it was religious.”

Parents like Bernstein have had to accept that their children may come home with ideas very different from their own.

“My husband was very wary of sending his kids to a religious school, because his sister became ultra-Orthodox in college,” Bernstein said. “But I felt that they were too young for that really to be an issue. And at age 2, that’s true. But already my daughter who’s 4 tells me that Hashem made the world and asks me if Hashem is real — which is a little uncomfortable for us.” Despite this, the Bernsteins were pleased with what they saw as an unusually warm and welcoming school, so they decided to keep their kids enrolled.

Though Sara Hecht said that she hopes to open a school for older children someday, Chai Tots almost certainly owes some of its success to many parents’ feeling that their preschool-aged children are too young for the religious outlook of their teachers to affect them. Indeed, early childhood education experts say, parents look primarily for proximity, hours and cost when they choose a preschool.

“As children get older, parents do become more concerned about the content of the education, and it’s not enough to have a nice, warm atmosphere and a lot of singing,” Woocher added.

Bernstein did not hesitate when asked where she planned to send her older daughter to kindergarten next year: PS 321, her neighborhood public elementary school.

“I suspect fully that once things are over here for her, she’ll pretty much forget about… the religious stuff,” Bernstein said. “And in a way, that would be sad, because in a way, our whole purpose of bringing her here was that we did want her to learn about the Jewish world. But we want it to be coming from the place in the spectrum where we are.”