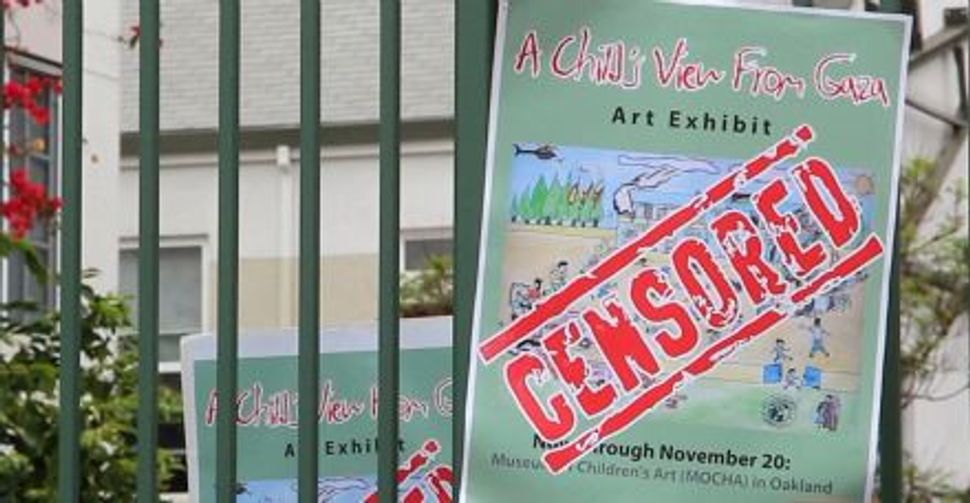 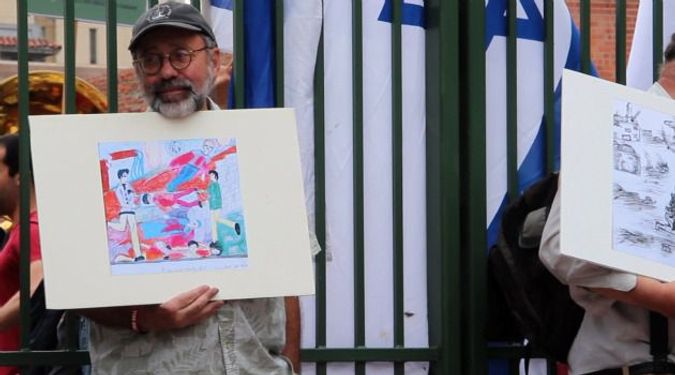 Dodging Art?: Protesters rally against the decision by the Museum of Children?s Art, or MOCHA, to scrap the exhibit of Palestinian children?s art. Image by Adam Grossberg, Oakland North

The Tweet from the Jewish Federation of the East Bay was unabashed: The Jewish establishment had succeeded in shutting down an art exhibit aimed at children that portrayed Israel scathingly.

“Great news!“ the federation proclaimed. “The ‘Child’s View From Gaza’ exhibit at MOCHA has been canceled thanks to some great East Bay Jewish community organizing.”

Sent on September 2, the message celebrated the cancellation of an exhibit of 45 drawings by Palestinian children that had been scheduled to open on September 24 at Oakland’s Museum of Children’s Art. The museum’s decision was announced immediately following a meeting between Jewish groups and the museum‘s directors. And that has set off a debate still roiling the cultural quarters of the San Francisco Bay area, where the Jewish establishment has already drawn lines on artistic criticism of Israel from within the community. 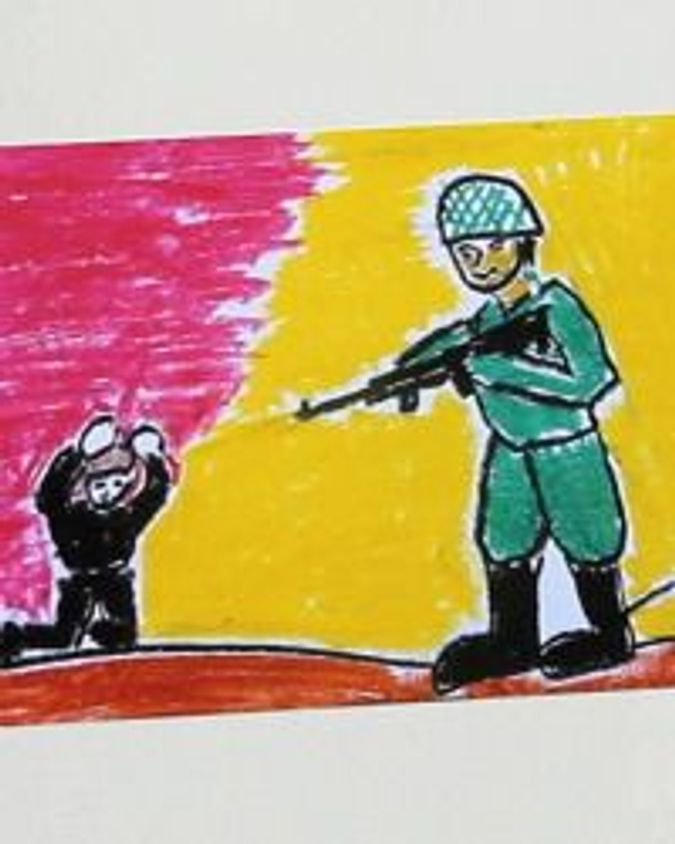 Graphic Art: Some of the children?s art is disturbing, like this depiction of a soldier confronting a child. Image by Adam Grossberg, Oakland North

Advocates for the Palestinian cause charge that the Jewish community is now attempting to control debate about Middle Eastern issues outside Jewish communal institutions. The fact that the argument centers on pencil-and-crayon drawings by children puts an unusual spin on the matter, and solemn charges of censorship are coming from many quarters, including a passionate essay by Northern California resident Alice Walker, author of “The Color Purple.”

“I was absolutely floored,” said Barbara Lubin, founder and executive director of the Middle East Children’s Alliance, a not-for-profit organization that focuses on Arab children’s issues and calls for ending American support for Israel. Her Bay Area-based group, which is sponsoring the traveling exhibition, first contacted MOCHA back in March about providing a local venue for the show. Lubin estimates that MECA’s costs for the exhibit, including staff, shipping, framing and marketing, came close to $10,000. “They have pressured other art exhibits around the country and in the Bay Area that had anything to do with Palestine,” Lubin told the Forward. “This is not our first time feeling that pressure.”

The Bay Area’s history of strong political activism is never more intense than when it comes to the Middle East, whether the activists are pro-Israeli or pro-Palestinian. As in many such cases, this protest of the Jewish establishment includes Jewish groups and individuals, among them the International Jewish Anti-Zionist Network-Bay Area, the Israeli Committee Against House Demolition and many Jewish members of the Middle East Children’s Alliance, topped by the Lubin herself, a founder of MECA.

The internecine aspect of the conflict, portrayed in the newly released documentary “Between Two Worlds,” by Alan Snitow and Deborah Kaufman, follows a recurring toxic pattern of “victimization and recrimination,” Kaufman told the Forward.

Rabbi James Brandt, CEO of the Jewish Community Federation of the Greater East Bay, denied that censorship was his organization’s goal. In an interview with the Forward, he expressed regret at the tone of the Tweet that celebrated MOCHA’s closure of the exhibit. The issue was serious and more complex, he said. A statement issued under his organization’s banner together with East Bay’s Jewish Community Relations Council and the Anti-Defamation League better represented the Jewish establishment’s position, Brandt said.

“A biased, one-sided perspective filled with depictions of violence has no place in a community-based museum dedicated to serving young children, including 3-, 4- and 5-year-olds,” the statement read.

The violence depicted in many of drawings is indeed bloody, and in many instances it portrays smiling soldiers wearing the Magen David shooting and killing women and children (despite the fact that Israel Defense Forces uniforms do not display the Jewish star). Much of the artwork was produced in children’s therapy sessions supported by funds from MECA after the 2009 incursion by the Israel Defense Forces into Gaza that lasted more than two weeks and resulted in hundreds of civilian Palestinian deaths, including those of children.

Lubin maintains that the artwork represents the children’s unprompted creativity, despite the fact that MECA, an organization avowedly opposed to U.S. support for Israel, sponsored the art’s creation at sessions guided by therapists under its pay.

The woman behind “A Child’s View from Gaza” is Susan Johnson, a 70-year-old grandmother living in Doylestown, Pa. Raised in segregated Chattanooga, Tenn., Johnson was at one point a supporter of Richard Nixon and a Republican committeewoman, she told the Forward in a telephone interview. But she drifted leftward over the years, and became an ardent advocate for Palestinian rights after a “life changing” visit to the West Bank in 2004.

Johnson said she was shown the drawings at hospitals and camps where children were being treated for physical and emotional trauma after Israel’s attack on Gaza in 2009, and she decided to bring these drawings to the United States as a traveling exhibition. “A Child’s View From Gaza” has been shown in several places around the country, including the Green Door Studio artists collective, in Burlington, Vt., and Curtis Memorial Library, in Brunswick, Maine. None of the previous venues were specifically oriented toward children, and the exhibition did not raise the sort of controversy elsewhere that it did at MOCHA.

Brandt, the Jewish federation CEO, claimed the Oakland venue’s target audience of young children, rather than the exhibit’s politics was at the core of Jewish groups’ objection. “The concern that we brought to the attention of the museum staff was that the children of the East Bay area — who in that age group do not know very much, if anything, about Israel or Gaza, or the Middle East conflict — would be seeing these very violent graphic images completely out of context.”

Even without the stars of David identifying the soldiers, Brandt maintained, the violent images were “inappropriate for this age group.” As for the Jewish star, he said, “for children in our region… their immediate association is not with the State of Israel, but [with] their classmates who have Jewish stars on their T-shirts from our Jewish camps and after-school programs.”

According to MOCHA, the museum’s own curatorial and institutional inability of to handle the show was at the root of the matter. In a public statement, MOCHA board member Randolph Belle said the museum canceled the show “because we lacked a formal policy for sensitive content and because were not confident that we had the resources to deal with the numerous concerns we received regarding the exhibit.”

In an open letter on its website, the museum noted that most children who visit MOCHA are between the ages of 5 and 9. “Many children enter our gallery without the supervision of their parents,” the website stated.

Hilmon Sorey, MOCHA’s board chairman, declined to speak to the Forward. But sources familiar with the museum’s operations say an average of 10 school classes, totaling about 200 children, visit each week. The museum often provides “field trip packets” for school classes, and “teaching artists” as guides to the exhibits.

Lubin told the Forward that MECA was prepared to provide its own curatorial materials, as well as psychotherapists to help the children cope with the violence observed in the exhibit. But MECA rejected an offer by MOCHA to mount a smaller version of the show in a less accessible area within the museum.

Lubin vowed that the show would go on, nevertheless. And so it did. An “Anti-Censorship” press conference held on September 23 featured statements from activist organizations, including CodePink Women for Peace, Afghans for Peace and American Muslims for Palestine. The following day, supporters holding the artworks demonstrated on the street in front of MOCHA before attending the show’s opening — in a nearby storefront.