For One Day, Newark’s Jews Return To Mourn 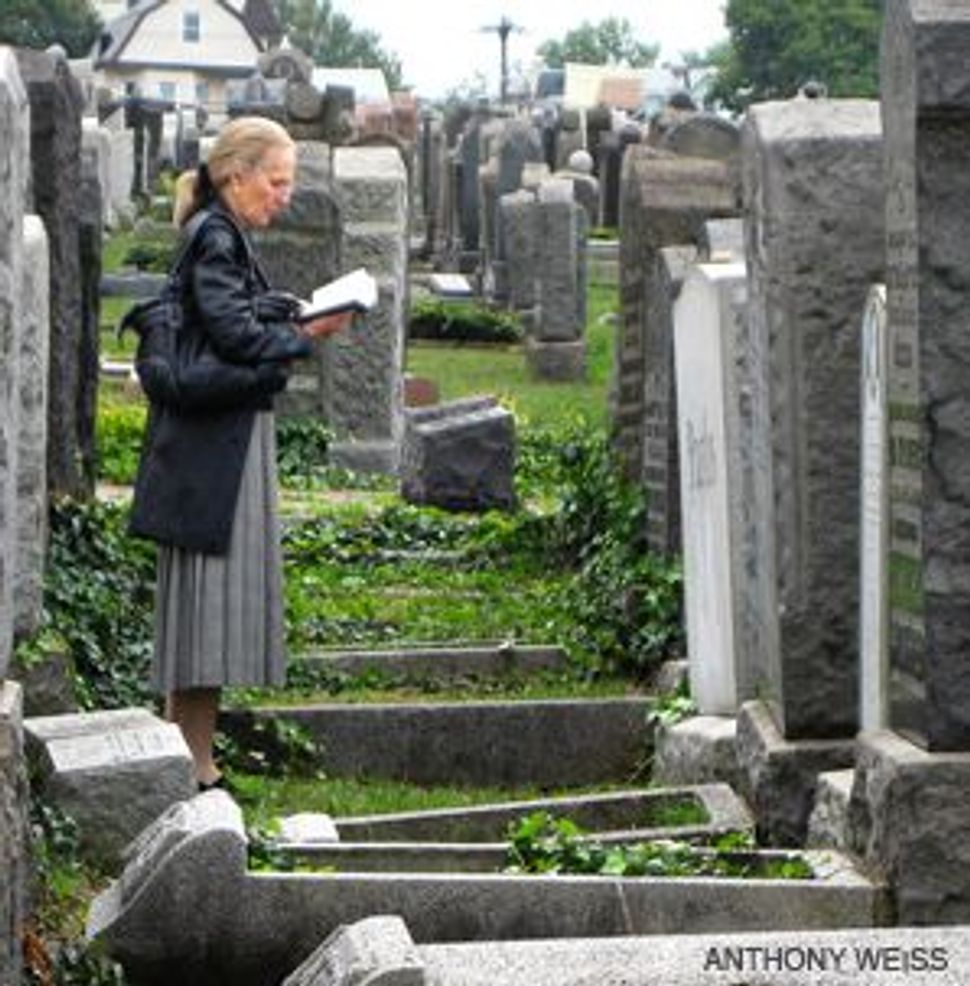 PRAYER FOR THE DEAD: Esther Friedman (above) journeyed to the city of her youth from Queens to pray at her grandfather?s grave on Newark, N.J.?s most recent annual safe day for Jewish mourners.

Newark, N.J. — The lively Jewish community that made Newark, N.J., one of the capitals of American Jewish life is long gone, but once a year a small spark of the community is rekindled — under police protection. 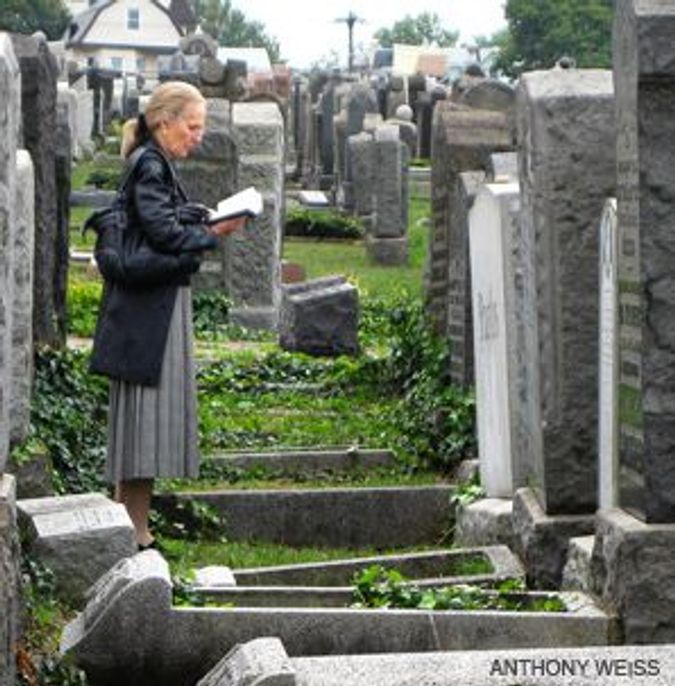 PRAYER FOR THE DEAD: Esther Friedman (above) journeyed to the city of her youth from Queens to pray at her grandfather?s grave on Newark, N.J.?s most recent annual safe day for Jewish mourners.

One day each year, typically the Sunday that falls between the High Holy Days, a detail of police officers creates a temporary bubble of security around Newark’s Jewish cemeteries. On that day, hundreds of Jews trickle back into Newark, and a faint shadow of the city’s once-bustling Jewish population is reborn, as visitors come to recall both the relatives and the community that have since passed on.

Among those visiting this year were Molly Metz and her family, who picked their way past the debris from the crumbling gateway of Congregation Toras Emes’s cemetery and walked down to the graves of Rose, Morris and Jack Schwartz — Metz’s mother, father and brother respectively. With her children and grandchildren gathered around her, Metz, 75, tearfully announced to her mother’s headstone, “So we’re all here, Bub.”

It’s been 40 years since Metz lived in Newark, but like many Jews, she makes it a practice to visit the graves of her relatives on the High Holy Days.

“It’s absolutely sad to see what was once a great Jewish city come to the point where 200 Jews out of the 65,000 that once lived there have to come once a year with a police escort,” said Warren Grover, a local historian who has written about the history of Newark’s Jewish community. “It’s sad, but it’s life.”

The officers who have provided the security escort for the past two decades come from the Essex County Sheriff’s Department and the Newark Police Department. While most are volunteers, there are Jews and non-Jews alike, all making sure that visitors feel safe in a city that has struggled to bring down its notoriously high crime rate.

“My background is the Jewish faith, and I feel it’s something I need to give back to my people,” said Sy Nankin, a deputy sheriff with the Essex County Sheriff’s Department who has been volunteering for 14 years.

The day’s activities generally begin at about 10 a.m., when cars from the surrounding suburbs pull up alongside a small cluster of cemeteries in the northwestern part of the city and by a group of cemeteries near Newark’s airport.

The center for the day is the old office of a Jewish monument business, which is otherwise closed. Out-of-towners can go there to ask for the exact location of a relative, grab a cup of coffee or kibbitz about the old days. The whole thing is organized by the local Jewish federation, United Jewish Communities of MetroWest, which coordinates with the police and publicizes the day.

The majority of the visitors this year appeared to be well past 60, though they were interspersed with a few younger families. Most walked quietly out into the graveyard to find the tombstones, exchange memories and say a prayer of remembrance. Then they returned to their cars and drove away.

Newark was once home to the fourth-largest Jewish population in the country. At the community’s peak in the 1930s and ’40s, roughly 65,000 of Newark’s 450,000 residents were Jewish. The community was based in Newark’s cramped Third Ward, which was full of pushcarts and sweatshops.

At the same time, synagogues and mutual aid societies began to purchase plots of lands in Newark’s thinly populated outskirts for burial grounds. Money was tight, and graves were packed in close to one another to stretch the capacities of the real estate.

As the population grew more prosperous, many Jews moved to more spacious quarters in Newark, most notably in the tree-lined and heavily Jewish Weequahic neighborhood, which has been memorialized in the novels of local boy Philip Roth, a classmate of Metz’s. (“He was the smart one,” she said.)

“It was a beautiful neighborhood,” recalled Metz. “It was so Jewish, I didn’t know there was anybody who wasn’t Jewish. I thought everybody was Jewish.”

Newark’s race riots in 1967 destroyed many of the remaining Jewish businesses in the old Third Ward, and those Jews who had remained in the city moved out shortly thereafter. Still, in those early days after the exodus, many of those who had left the city came back to visit their relatives.

“At one time, you couldn’t walk around in the cemeteries, there were so many people,” said Sanford Epstein, whose family monument business still cares for the cemeteries and many of the gravesites.

But as Newark’s crime worsened, many became afraid to return, fearing they would be attacked.

Today, Newark is virtually devoid of Jews. There is only one operating synagogue left, populated largely by people from surrounding towns. Communal officials estimate that Newark’s Jewish population is a few hundred at most — far outnumbered by the tens of thousands of Jewish dead who are buried in Newark.

Still, Newark has shown signs of revival in recent years. Today, the neighborhood around the cemetery seems to hover between decay and renewal, marked by a combination of boarded-up buildings, well-kept lawns, cracked sidewalks and new houses.

The cemeteries are subdivided into sections, each founded by a synagogue or a burial society or by fraternal lodges. The societies that owned the cemeteries are largely defunct, and there is little money to pay for upkeep, unless a relative wants to create a maintenance endowment for the gravesite.

Some 20 years ago, the New Jersey branch of the Shomrim, a fraternal order of Jewish policemen, began to volunteer to provide security one day a year for Jewish families who wanted to visit their relatives. That organization has since disbanded, and in recent years the local Jewish federation has taken over the organization of the visiting day.

Some of the visitors, like Metz, are reconnecting with close family members. Others come to pay their respects to ancestors they never met. Howard Matson, a banking executive and amateur genealogist, drove down from Westport, Conn., to pay his respects to his great-uncle Harry Mate, a businessman and bootlegger who died of kidney failure in 1922.

“I’m probably the first person to visit his grave in 40 years,” Matson said, gazing at the monument. Matson then placed a stone on the headstone and recited the Kaddish, the traditional prayer of mourning.

For One Day, Newark’s Jews Return To Mourn