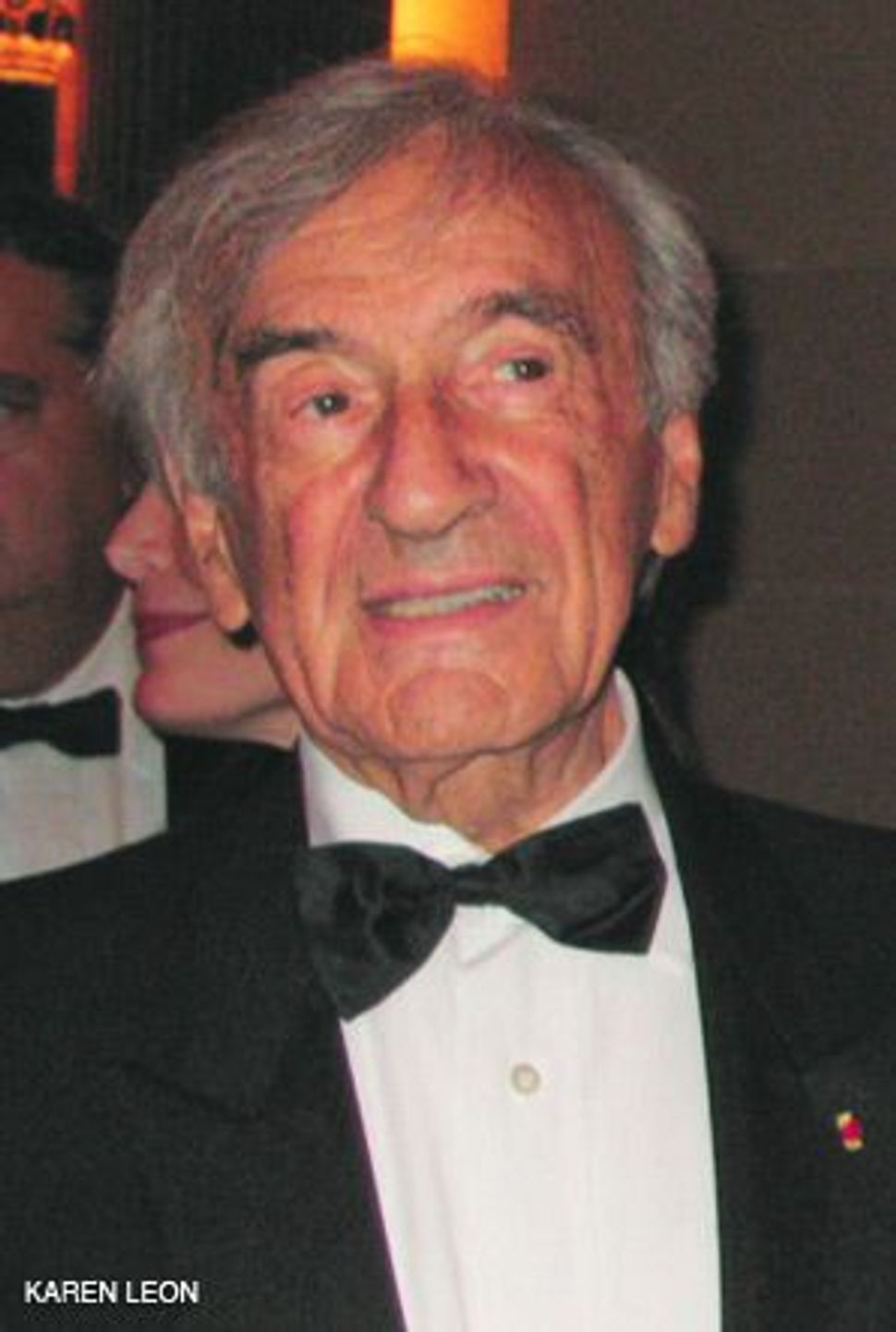 WISDOM AND MEMORY AT 92ND ST, Y’s TRIBUTE TO ELIE WIESEL AT 80 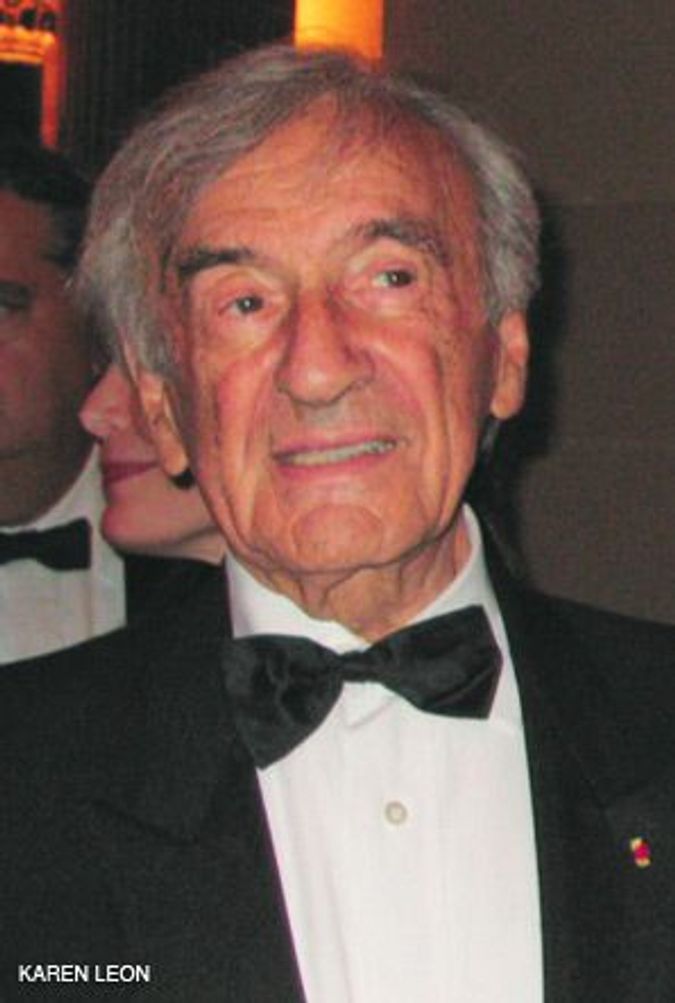 Elie Wiesel’s 80th birthday, September 30, was celebrated October 2 when the 92nd Street Y held an event titled “A Day of Humanity and Peace — A Tribute to Elie Wiesel.” It was a memorable gift to hundreds of Wiesel fans. “Mayn libe Marion un Elie,” began the Y’s executive director, Sol Adler. “No matter where Elie and Marion’s travels take them, when they return here to the 92nd Street Y, we greet them in Yiddish and they know they are home. Elie sits at a desk and becomes our teacher.” Onstage, Wiesel listened, smiled and at times seemed embarrassed by the acclaim heaped upon him. “He did more than Moses Mendelsohn, the father of Jewish enlightenment. A mensch, a scholar, a leader, he universalizes the Jewish experience,” declared Eric Kandel, the Nobel Prize-winning psychiatrist and neuroscientist. Barbara Walters, creator and co-host of ABC-TV’S “The View,” lauded Wiesel as “a gentle yet tough teacher,” and said, “Elie kept Marion busy translating his [40] books.” Wiesel demurred: “Barbara, when you speak, in one day you reach more people than all of my books together.” Arthur Gelb, former managing editor of The New York Times, recalled the April 1985 gold medal ceremony at the White House, during which Wiesel was unable to dissuade President Reagan from visiting the cemetery in Bitburg, Germany. “Elie sent him a copy of his speech in advance… pleaded with the president. The next day, the president switched the event from a room holding 300 to a small one.” Gelb recapped Wiesel’s plea not to visit the cemetery where 47 of Hitler’s elite were buried. “‘That place is not your place — your place is with the victims.’ “The president went [to Bitburg], and Elie, your warning was sounded on the front pages of newspapers all over the world.” Wiesel lamented, “Only why didn’t Jewish leaders speak up to FDR? I was told that when you are in the Oval Office, you can’t say ‘No!’ I taught them that you can say ‘No!’”

Theodore Bikel accompanied by Tamara Brooks on the piano, sang in Yiddish, “Ver Vet Blaybn?”— “Who Will Remain?” Irshad Manji, author of the 2004 book “The Trouble With Islam Today: A Muslim’s Call for Reform in Her Faith” (St. Martin’s Press), greeted the audience with, “Salaam, Shalom. To the atheists in the audience, how the devil are you?” She then cited Bobby Kennedy, “who said moral courage is greater than courage on the battlefield.” John Silber, president of Boston University, where Wiesel teaches, described Wiesel’s harrowing trip a number of years ago via dugout to meet with the Miskito Indians, who were being victimized by the Sandinistas. Wiesel’s son Elisha Wiesel, showcased the Nobel laureate as a warm, caring father who had been a baby-bird-in-nest and cat-in-tree rescuer.

In response to the questions “Is war legitimate? Is there a just war?” — two of several queries sent in by young people from around the globe — Wiesel answered: “The only war I would have supported was against Hitler. Had I been a young man [in America], I’d have been willing to bear arms. That was a just war.” Asked about the impasse between the Turks and the Armenians, Wiesel said: “Both sides came to me. I don’t believe in collective guilt. I asked the Turks to admit it happened. All the Armenians want is the right to remember.” In his video tribute to Wiesel, cellist Yo-Yo Ma said: “I grew up with the words ‘never again!’ And why we should be more empathetic to the [people] of the world.” He added that when cellist Pablo Casals had been asked what work he would have most wanted to hear played, “His reply was Bach’s Sarabande 5th Suite.” Yo-Yo Ma then enchanted Wiesel and the audience with this exquisite work. Matthew Bronfman, the Y’s program committee chairman, thanked the audience for coming. Wiesel walked off the stage to a standing ovation.

“[Elie] never fails to ask about my father, Kirk,” said Michael Douglas, host of the September 22 Elie Wiesel Foundation for Humanity awards dinner. The event honored France’s president, Nicolas Sarkozy. “Elie has given us hope and tries to give hope to others,” Douglas said. Douglas’s stunning wife, Catherine Zeta-Jones, and Madame Sarkozy (aka Carla Bruni) had the photographers in overdrive. Attended by 900 high-profile guests, the evening was launched with the Opera Noir de New York singing a stirring rendition of “The Star-Spangled Banner,” “Hatikvah” in impeccable Hebrew and “La Marseillese” in superb French. Wiesel reflected on his post-Buchenwald “Jewish experience in France,” and noted, “I cannot forget the antisemitism of *[Philippe] Pétain, nor the resistance *to Pétain.” Lauding Sarkozy “for his global humanitarian efforts,” Wiesel presented him with a tzedakah box and said, “I hope you will continue your battle against violence in the world.” Sarkozy responded, “The French people will never forget America’s sacrifice for France,” and declared, “Iran must not have a nuclear bomb… Russia must respect the borders that abut them.” And in a reflective aside, he mused about “the solitude of power.”

The mission of The Elie Wiesel Foundation for Humanity, which is rooted in the memory of the Holocaust, is to combat indifference, intolerance and injustice through international dialogue and youth-focused programs that promote acceptance, understanding and equality.” In Israel the foundation operates two Beit Tzipora Centers for study and enrichment in Ashkelon and Kiryat Malachi. The focus is on educating the Ethiopian-Jewish community and giving Ethiopian-Israeli students the opportunity to fully participate in Israeli society. More than 1,000 boys and girls are currently enrolled in after-school programs. In the fall of 2007, the foundation expanded its efforts toward helping Darfurian children adjust to their new lives in Israel.

“Ten years ago I encountered [for the first time] a Reform Jewish community in Milwaukee, Wisconsin,” Moti Dotan, mayor of the Lower Galilee Regional Council in northern Israel, told me during our September 18 chat at Manhattan’s East Side Bruno Jamais Restaurant Club. “It was a shock! I come from an Orthodox yeshiva. After three days in Milwaukee, I understood how difficult it is to hold on to Judaism in America. But I began to admire Jewish organizations in America,” said Dotan, who touted Kadoori, a Galilee-based school that attended by “the poorest children — Jews, Druze, Arabs, Ethiopians” among others. “You know,” he said, “Rabin was a graduate.” Dotan, a World ORT board member, was one of a group of American and overseas ORT board guests relishing the delights of upscale Manhattan — a far cry from ORT’s late-18th-century origins in Eastern Europe, where it taught trades to the poorest of the poor. ORT also operated in post-World War II displaced persons camps, teaching survivors skills that enabled those in the camps to create new lives, raise families and, in turn, become benefactors themselves. Today ORT America and World ORT’s reach includes a global network of schools and high-tech training programs that empower 300,000 students in 62 countries to become productive citizens.

At our table was Doreen Hermelin, national president of ORT America (and Forward reader). President Clinton had appointed Hermelin’s husband, David Hermelin, a past ORT president, to Norway in 1997. In 2001, when David Hermelin was remembered at an ORT dinner attended by Hillary Clinton, Doreen recalled her husband’s fixation with luncheon meat: “He always brought along a salami in case there was nothing to his liking on the menu.” She talked about how her husband, after the couple settled into the embassy in Oslo, “ate salami on embassy-baked challah,” served on kosher china brought from their home in Michigan. “On one of his trips to Israel, he packed the salami in the center of his luggage. At the airport, the dogs sniffing the bags went into heat.”

The September happenings scheduled for ORT America and World ORT’s board of trustees included a private tour of Ancient Near Eastern art at the Metropolitan Museum of Art with Oscar White Muscarella, a world authority, as the guide. There followed a reception and dinner at the restaurant, with a keynote address by Dotan. Among the attendees at the reception and dinner were Robert Singer, World ORT director general, and Jean de Gunzburg, World ORT president and a direct descendant of Baron Horace de Gunzburg, one of the three founders of ORT in St. Petersburg, Russia, in 1880. Capping the ORT Manhattan art-cum-gourmet escapade was the September 21 dinner at Capsouto Frères Restaurant. Restaurateur and sommelier Jacques Capsouto, a former ORT student who has received awards from such publications as Santa Magazine, Wine Spectator, Wine Enthusiast, Zagat and Mobil Guide, expounded on the wine pairings of each course: for example, a Yarden Sparkling Brut from the Galilee, a Yatir Sauvignon Blanc from the Judean Hills (2007) and a Kayoumi Caberrnet Sauvignon from the Galilee (2003). The evening’s keynote speaker was President Jean de Gunzburg, whose stated intent is “to make World ORT the household name of Jewish education.”