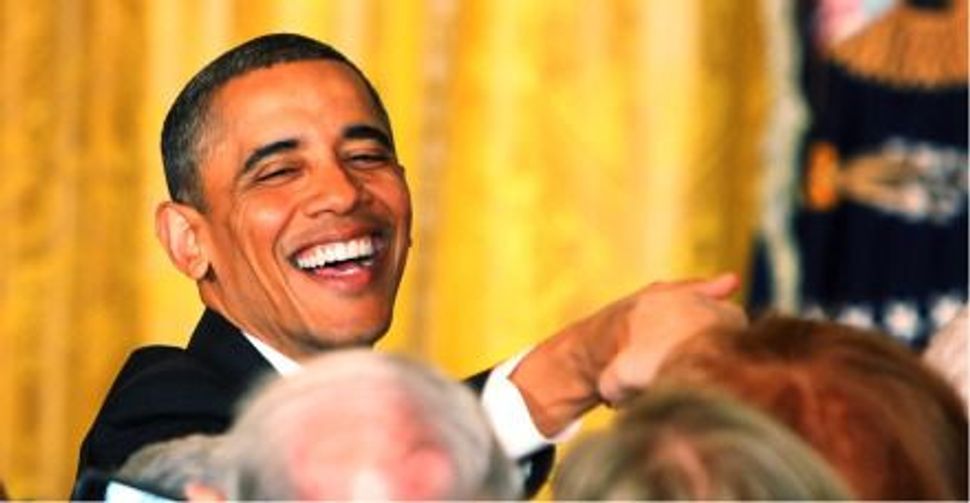 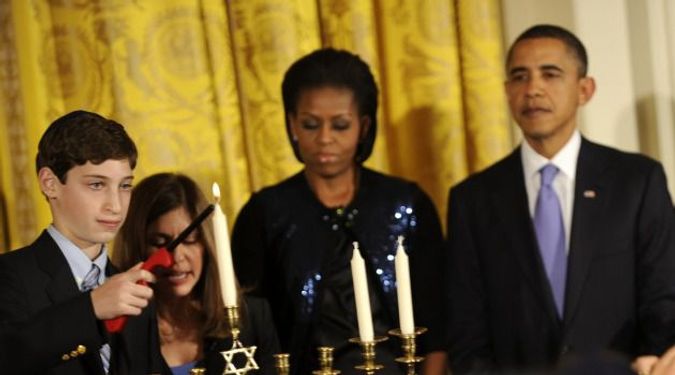 Key Constituency: President Obama?s Jewish supporters are pushing back hard against Republican attacks that he is soft on Israel. Polls say support has dipped in the key Democratic constituency. Image by Getty Images

Together, they have been trying to figure out how to overcome a relatively successful Republican attempt to plant doubts among Jewish voters regarding Obama’s relations with Israel.

The fruits of both their labor and the labor of other campaign and White House officials has become evident in recent weeks: A pro-Israel blitz, which has included conference calls, website updates and opinion articles, and which culminated in the president’s address to the United Nations, has Democrats feeling that they are taking back the initiative.

“We feel really good that when the president’s full and complete record is on the table, the president will do exceedingly well in our community,” said Ira Forman, the Obama campaign director of Jewish outreach. Forman believes that the tide is turning thanks to a concerted effort in recent weeks to “set the record straight,” as his campaign publicity puts it, regarding the president’s relations with Israel.

Few argue with the contention that such a push has been necessary. Two recent polls indicated a decline in Jewish support for Obama, although Jews, as a group, still hold a more positive view of the president than the general population. According to the American Jewish Committee survey, Obama’s approval rate among Jewish voters dipped to 45%. A Gallup poll put Jewish approval of the President at 54%, still a decline compared to previous surveys. Just why Jews have turned more critical was far from clear. The polls pointed to dissatisfaction both with Obama’s economic policies and his policies on Israel.

A veteran Democratic activist and former head of the National Jewish Democratic Council, Forman was a natural choice for the daily lifting that the president’s drive to win Jewish support requires in the run-up to the 2012 elections.

But more publicly, the campaign has identified several surrogates to speak on Obama’s behalf to Jewish voters and activists. Key among these are Wexler, who represented a heavily Jewish congressional district in southern Florida, and Levine, who represented the San Fernando Valley in the Los Angeles metropolitan area. Both come with strong pro-Israel credentials from their years in Congress and are household names in the Jewish community.

Following the Republican attacks on Obama’s record on Israel, “I wanted to help in any way I could to communicate to our community how good a friend to Israel the president was and still is,” Levine said in an October 3 interview.

One way the former congressman communicated this message was in a letter he sent to Jewish voters just hours after Obama delivered his September 21 U.N. speech staunchly opposing the Palestinian Authority’s statehood resolution in the General Assembly. On the campaign’s letterhead, Levine praised the president’s stand while rejecting the claims of Republican candidate Rick Perry, who accused Obama of being “naïve” on Israel.

“Israel has no stronger friend than President Obama, but we need to repeat this message because it has been so distorted by Republican partisans,” Levine told the Forward.

Wexler, one of Obama’s first Jewish backers in the 2008 campaign, is now back in the frontlines, speaking to Jewish voters and activists about Obama’s record on Israel. A series of events in recent weeks has made his job easier: the president’s personal involvement in getting the Egyptian military to rescue Israeli diplomats surrounded by a mob in Cairo, a leaked report regarding the administration’s willingness to supply Israel with bunker-buster bombs that were denied to it by earlier administrations and Obama’s U.N. stand against the Palestinians’ statehood bid.

“This is an enormous set of circumstances bolstering the U.S.-Israel relations,” Wexler said.

Obama campaign officials and supporters insist that the peace process banner has not been abandoned. But with the coming of campaign season, a new set of priorities can be seen in the messaging to the Jewish community, one that stresses first Obama’s commitment to Israel’s security and legitimacy. Obama’s U.N. speech appeared to signal a phase in which he will be putting significantly less emphasis on bridging gaps to move the peace process forward and more on simply urging the Palestinians to come to the table for negotiations.

Beyond the improvement in American-Israeli diplomatic relations that this has engendered, the Obama campaign is also striving to highlight the administration’s strong security cooperation with Israel. Here, the administration can cite even Israeli officials, who have praised that cooperation as unprecedented.

This, in turn, segues into another key tactic the Obama campaign is adopting with Jewish voters: the use of “validators,” a term referring to outside officials, unrelated to the administration or the campaign, who can validate a political message.

In this case, the validators are Israeli senior officials who have gone on the record praising Obama’s support. Leading the pack is Prime Minister Benjamin Netanyahu, who was quoted in Levine’s letter to supporters; Defense Minister Ehud Barak, and Deputy Foreign Minister Danny Ayalon, an official known for his hawkish stands and who was caught on tape praising Obama’s friendship during an event in Florida. At the urging of Debbie Wasserman Schultz this video was posted on a campaign website.

The campaign is clearly pleased, believing that such sources give it outreach to a broader spectrum within the Jewish community. “It’s important that when people use false arguments to attack the president, that we get some perspective and listen to what the Israelis are saying, and not only doves,” Forman said.

Obama campaign officials have also been pointing to a poll done in Israel after Obama’s U.N. speech that showed a significant surge in his popularity there, in effect recruiting Israeli public opinion, too, as a validator. A previous survey, conducted months after Obama took office, found that only 4% of Israelis believed him to be “pro-Israeli.” The recent poll, sponsored by The Jerusalem Post, showed that 54% of Israelis now hold this view.

Dan Senor, a Republican strategist, took issue, in a recent article, with the Democratic notion that Obama’s problem with Jewish voters has to do solely with getting his message out. “Obama has made some meaningful exceptions, particularly having to do with security partnership, but overall he has built the most consistently one-sided diplomatic record against Israel of any American president in generations,” Senor wrote in a September 14 opinion article in the Wall Street Journal which irked many in the Obama campaign. “His problem with Jewish voters is one of substance, not messaging.”

While the White House is officially separated from the campaign, the president and his top administration aides have spearheaded their own outreach efforts focused on the issue of Israel. The administration’s top point man for the Jewish community is Vice President Joe Biden. According to reports, the vice president has held meetings with Jewish donors in which the discussion centered on Obama’s policy toward Israel. Biden is also the host of an annual High Holy Day reception for Jewish communal leaders.

“Why Biden? Because he’s been around for so long and so many people [in the Jewish community] know him,” said Steve Rabinowitz, a Washington public relations executive who served as an adviser to the Clinton administration. “He has a long record on Israel.”

Dennis Ross, a senior adviser to Obama on the Middle East with close personal and communal ties to the Jewish community, has also been a key administration contact point person. It is Ross who has led the effort to block a Palestinian move for statehood via the U.N. and to restart peace talks.

Ross, who has served both Democratic and Republican presidents on the Middle East, going back to Ronald Reagan, updates Jewish leaders regularly on developments in the region. In a recent conference call, according to participants, Ross outlined Obama’s actions in the U.N and urged Jewish activists to avoid turning Israel into a partisan issue.

Also helping Obama’s effort is his new ambassador to Israel, Daniel Shapiro. In just a few months, Shapiro, who took up his post in July, managed to turn his position in Tel Aviv into a major hub of public diplomacy activity, which has, in turn, helped increase the visibility of the Obama administration’s relations with Israel in the eyes of Israelis.

The Obama campaign’s next goal will be a drive to compare the Republican candidates’ views and record on Israel with those of the president, an effort that Obama campaign insiders boast will reveal “huge differences” between the two sides.

Beyond this, Democrats would also like to move toward a deeper discussion with the Jewish community on domestic issues, where they believe Jewish voters’ affinity to liberal political and social values would play out well for the Obama campaign. A first step in this direction is expected to focus on the president’s jobs package, which now awaits debate in Congress.

Still, the issue of Israel remains the main focal point of Jewish outreach efforts. “In the past month and a half, the news issues dictated our focus,” a campaign official said. “It’s not as if we wanted to talk only about that, but there were things happening and we had to get the facts out.”