A Taste of Israel 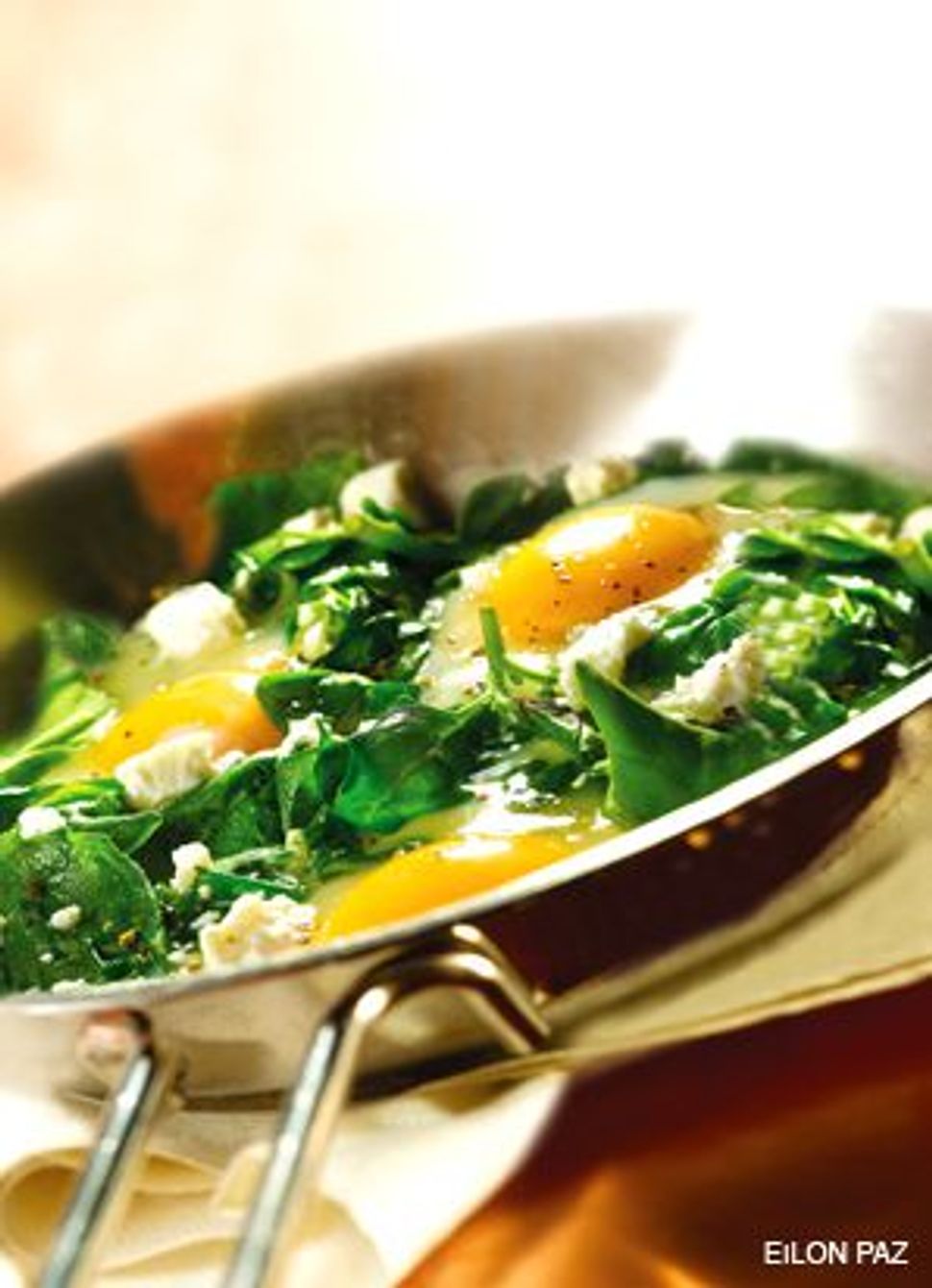 Israeli food is known for a lot of things, but refinement is not traditionally one of them. 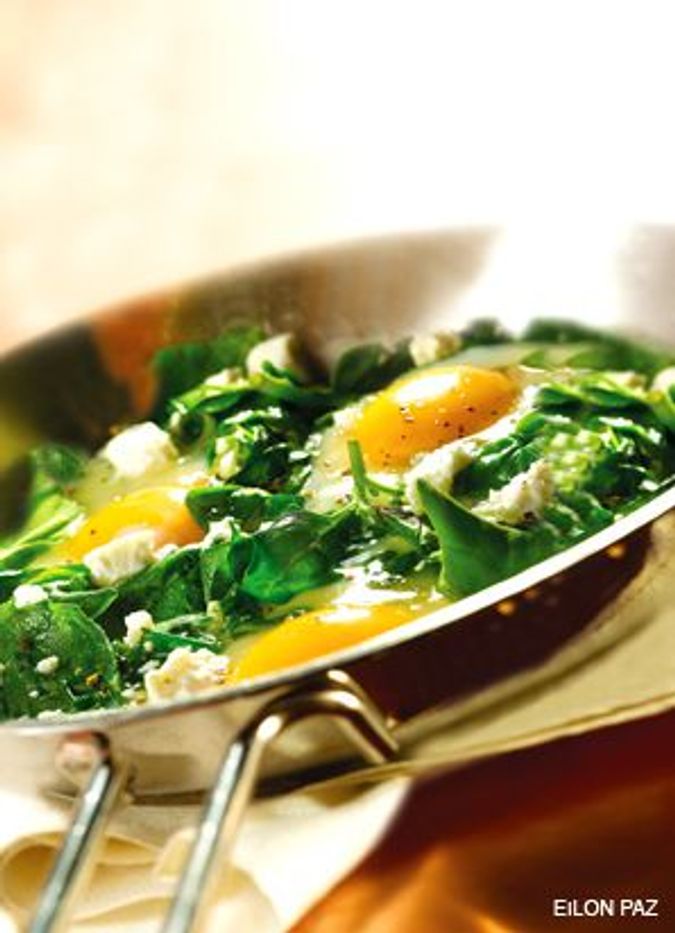 There is the falafel mentality (crispy and greasy), the hummus-and-pine-nuts-platter mentality (quick, clean and healthy) and the pomegranate-seed mentality (exotic and Mediterranean, but scant, like the kind of food you’d expect birds to eat in an Israeli rainforest).

Despite its good-natured junkiness, simplicity and popularity among Jews and non-Jews alike, the phrase “five-star restaurant” is almost never modified by the adjective “Israeli.”

With the American release of “The Book of New Israeli Food,” Tel Aviv-based editor and gastronome Janna Gur hopes to change that.

“This is the way falafel is supposed to be,” said Gur, who compiled an extensive collection of recipes by food writers and chefs for the book, in an e-mail to the Forward. “If you go to the trouble of making falafel at home — a messy business — you might as well make the real thing.”

The falafel in “New Israeli Food” is characteristically rich and full-bodied. The tome’s basic recipe calls for fresh parsley and coriander, as well as Shipka hot peppers (Gur offers dried hot red pepper as an alternative), cumin and ground cardamom. And lest anyone suspect that Gur is merely offering a tarted-up version of standard fare, the basic falafel recipe is followed by one for fish falafel in spicy harissa (red chili paste) mayonnaise.

Gur is the founder and chief editor of Al Hashulchan Gastronomic Monthly, an Israeli food and wine journal. After immigrating to Israel from Russia, and subsequently working as an El-Al flight attendant and a translator of literary fiction, Gur, along with her husband, began publishing Al Hashulchan. In its first incarnation, the magazine was a journal for food industry professionals. Soon, amateur cooks and foodies started taking notice, and Gur and her magazine rapidly cultivated a following among the Tel Aviv culinary scene.

“I wanted to tell the story of modern Israel,” Gur said. “There is this image of Israel that comes directly from Jewish Agency posters — Israelis drinking orange juice, wearing funny hats and dancing hora on the street, or there is another vision of constant war and terrorist acts.”

“New Israeli Food” is divided into six sections. Some, such as “Salads Etc.” and “Grill,” are self-evident, featuring recipes for such Israeli staples as hummus, eggplant and kebabs — as well as the befuddling mixed grill, which combines chicken livers, spleens and hearts.

The book also springs some surprises on its readers, not the least of which is the section on holidays, which includes recipes for Ramadan. “It’s a book about Israeli food,” Gur said. “Twenty percent of Israelis are Arabs. A few eyebrows were raised… but I am proud of it.”

“The Street and the Market” chapter includes bourekas, shakshuka and Jerusalem bagels — basically, home versions of Israeli market highlights. Most of the book’s recipes are simple, straightforward and light on ingredients, but its pages are beefed up with introspective essays on Israeli food and culture. Sometimes, the essays are merely clever: “Shakshuka,” Gur muses on the recipe composed of eggs, tomato and spices, “is one of those dishes you can make even when your refrigerator appears to be empty.” Others are more profound, hazarding observations on Israeli culinary consciousness and venturing to explain some of the fundamental aspects of Israeli culture.

For instance, Gur posits, the reason that vegetables play a prominent role in the traditional Israeli breakfast isn’t a mass need for vitamins or hydration. Instead, she says, it dates to pioneer kibbutzniks, whose economy revolved around their produce. She also explains the origins of the elaborate Israeli breakfast, noting that it was originally a midday meal for those same kibbutzniks, who started work before dawn.

The book is versatile, and it started out as a work purposely geared toward a non-Israeli audience. “I originally published [“New Israeli Food”] in Israel,” Gur said. “It was written in English and aimed at tourists and visitors.”

In Israel, “tourists and visitors” can include anyone from Christian fundamentalists to atheist Jews, and everyone in between. Religious Jews might take exception to the main recipe for challah, which is dairy (an alternate pareve version is suggested, with water and oil substituted for milk and butter).

Gur, who came to Israel in 1974, can’t stop gushing about the country’s culture and people — which, for an interview centered on food, definitely speaks to both her perceptiveness and her sensibility. “There is a mixture of Western sophistication with Levantine flair,” she said — and for a moment, one wonders whether she’s talking about the people or the food. Then she elaborates: “Girls with bikinis, standing next to ultra-Orthodox Jews. I wanted to capture this mix. It is so perfectly reflected in the local food.”

Matthue Roth most recently is the author of “Losers” (Scholastic/PUSH Books), a novel about Russian-Jewish immigrant geeks. He is an associate editor of MyJewishLearning.com.

The following recipe, by food writer Shir Halpern, appears in “The Book of New Israeli Food.”
Shakshuka with Spinach and Feta

A mild version of shakshuka without tomato sauce
Serves 4

A Taste of Israel