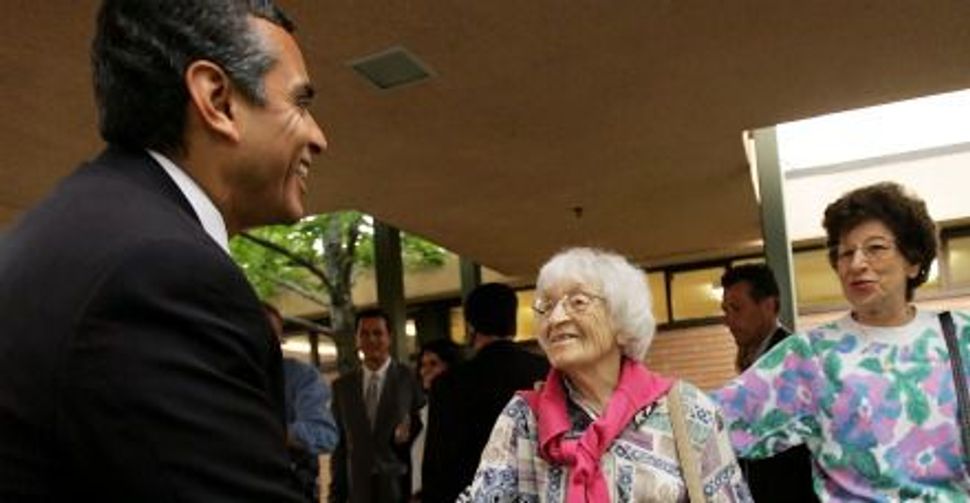 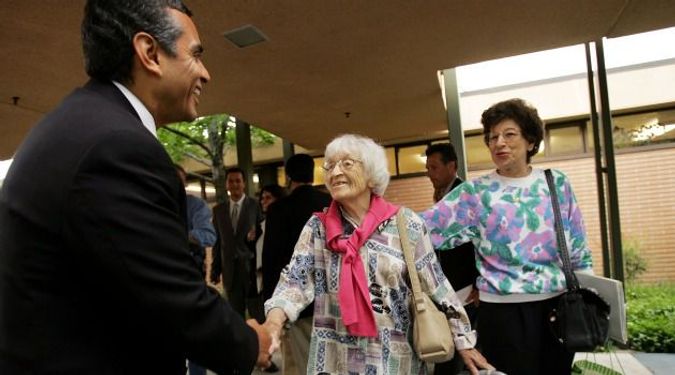 Angeleno Allies: Mayor Antonio Villaraigosa, Los Angeles? first Latino mayor, is leaving office in 2013 due to term limits. A group of Jews and other Latinos recently met to discuss ways of strengthening the alliance between the two groups. Image by Getty Images

It was billed as a broad coming together of two of Los Angeles’s most important ethnic communities. But percolating underneath the closed-door sessions and the concluding public declarations of common cause on such issues as immigration, racism and anti-Semitism at a recent “summit” between local Jewish and Latino groups was a more immediate issue: the city’s upcoming mayoral race.

Surging demographics and rising expectations have given Latinos a greater political role than ever before in national and local politics. And that reality is both uniquely promising and in some ways politically problematic for L.A.’s Jewish community.

The September 22 conference at the University of California, Los Angeles between leaders of L.A.’s organized Jewish and Latino communities was sponsored by the American Jewish Committee, the Anti-Defamation League, the National Council of La Raza and the New America Alliance. In terms of timing, the get-together reflected the early stirrings of “our post-first-Latino mayoral era,” as one conference organizer, David Ayon, senior fellow at the Leavey Center for the Study of Los Angeles, put it.

Antonio Villaraigosa, the city’s first Latino mayor in more than 130 years, will run up against term limits in 2013. But mayoral races here, like presidential races nationally, are starting ever earlier. And right now, in this overwhelmingly Democratic city, which has never had a Jewish mayor, the four leading Democrats for the post are all Jews or closely Jewish connected.

The unique line-up includes Jan Perry, the city council’s president pro tempore and an African American who converted to Judaism 30 years ago; Austin Beutner who serves as First Deputy Mayor and oversees the city’s jobs programs; City Controller Wendy Gruel, who is married to a Jewish documentary film producer; and 40-year-old Eric Garcetti, the city council president and son of a former L.A. district attorney, whose mother is Jewish.

Garcetti is the product of an Italian-Mexican marriage on his paternal side, while his maternal Russian Jewish grandparents founded Louis Roth Clothing, the first union shop in L.A.’s garment industry. Fluent in Spanish, Garcetti’s double-barreled ethnicity makes him the most serious contender to Zev Yaroslavsky, a veteran of the Soviet Jewry movement, who is 100% Jewish. Yaroslavsky, who will retire after four years as a county supervisor, has been a powerful force in Los Angeles politics for the last 30 years. He has not yet announced if he will make a run for mayor, but he is considered the front-runner.

Latinos are close to a majority in the city, and Jews often deliver as much as 18% of the vote. As a result, “coalition building was certainly the theme of the day,” said Rabbi Mark Diamond, executive vice president of the Board of Rabbis of Southern California, one of 60 invited conferees at the session.

“It’s sort of a golden age,” Amanda Susskind, regional director of the ADL, told the Forward after the conference, amplifying Ayon’s remarks made during the session. She noted that during the 2001 mayoral primary Villaraigosa tallied more Jewish voters than his Jewish opponent, Bob Hertzberg. “The two communities have been working closely together during this administration, and now it’s a matter of what happens next.”

But where the two groups converge politically and socially is not always immediately apparent in the everyday life of most Angelenos; even the Kosher Burrito stand that for many years used to serve patrons of all persuasions across from City Hall mysteriously disappeared a few years ago. Nevertheless, according to conference attendees, there is more common ground than one might assume.

“We discovered that the most obvious issues are not necessarily No. 1,” said Susskind. During the session, she told the Forward, dialogue started out focusing on immigration reform for Latinos and Jews’ concern for Israel’s security. But it ultimately shifted toward issues affecting both communities, such as the faltering local economy and the need for jobs.

Seemingly obscure redistricting issues were also on everyone’s mind. But these were, in fact, markers for the underlying demographic shifts that are steadily transforming the city’s politics and power centers.

The congressional race for the San Fernando Valley’s redrawn 30th Congressional District, where Reps. Howard Berman and Brad Sherman are squaring off, is one place where demographic changes promise to give Latinos more influence. The two House members, each from separate, heavily Jewish districts before the redrawing, have been forced to face off against each other as a result of the boundary changes.

A similar redistricting plan, backed by L.A. County Supervisor Gloria Molina and other key Latino leaders, would alter the demographics of the heavily Jewish 3rd County District in West L.A., presided over by Yaroslavsky. If the plan goes forward, according to L.A. Observed blogger John Schwada, “the 3rd District starts out as a pastrami sandwich but comes out a tamale.” In other words, Yaroslavsky’s district would lose the wealthy, heavily Jewish environs of Pacific Palisades, Brentwood, Westwood and all of the West San Fernando Valley, creating a new district with 50% of its population Latino.

Yaroslavsky has vowed to fight the plan. This has caused some head scratching; the 3rd District will no longer be Yaroslavsky’s concern after his term as county supervisor ends next year. And if he does declare for mayor, this fight could antagonize Latino voters.

But keeping his core constituency intact — with its wealthy Jewish campaign contributors and higher voting rate — may ultimately be more important to Yaroslavsky’s run for City Hall. Indeed, observers are saying that his opposition to the redistricting plan is the surest sign that he intends to run.

Garcetti, meanwhile, has just come out in support of the plan, drawing the first political line between himself and Yaroslavsky, a mentor and officiator at Garcetti’s wedding.

Neither Yaroslavsky nor any of the declared candidates attended the UCLA summit. A spokesman for the supervisor indicated that the event was not on his radar. Villaraigosa, who was scheduled to speak, was also a no-show.

A joint statement issued at the conclusion of the conference declared that the group would “denounce xenophobia and bigotry of all kinds; speak out against vitriolic rhetoric aimed at immigrants, Israel, and diaspora communities; and empower the Latino and Jewish communities to work towards a more just society.”

Brave sounding boilerplate. But where that might all come together, suggested Mexican-American filmmaker Moctezuma Esparza, producer of “Selena” and “The Milagro Beanfield War,” is in Hollywood, where the entertainment industry’s top ranks are predominantly Jewish, and Latinos are scarce at all levels.

“There are zero Latinos in feature film studio executive positions,” he told the Forward, “and less than 1% in television.”

Was this a result of Jewish discrimination against Latinos? Esparza smiled cryptically, and then disclosed that he himself was of Jewish extraction, a descendant of Sephardic exiles escaping the Inquisition to the New World in the 16th century. He said his family settled in the hill country of Jalisco, ending up generations later in East L.A., an historical home of both Jewish and Latino communities, where the Kosher Burrito was invented and, at least politically, is still cooking.