Sarah Palin Hits a Nerve Among Jewish Women, But It’s a Raw One 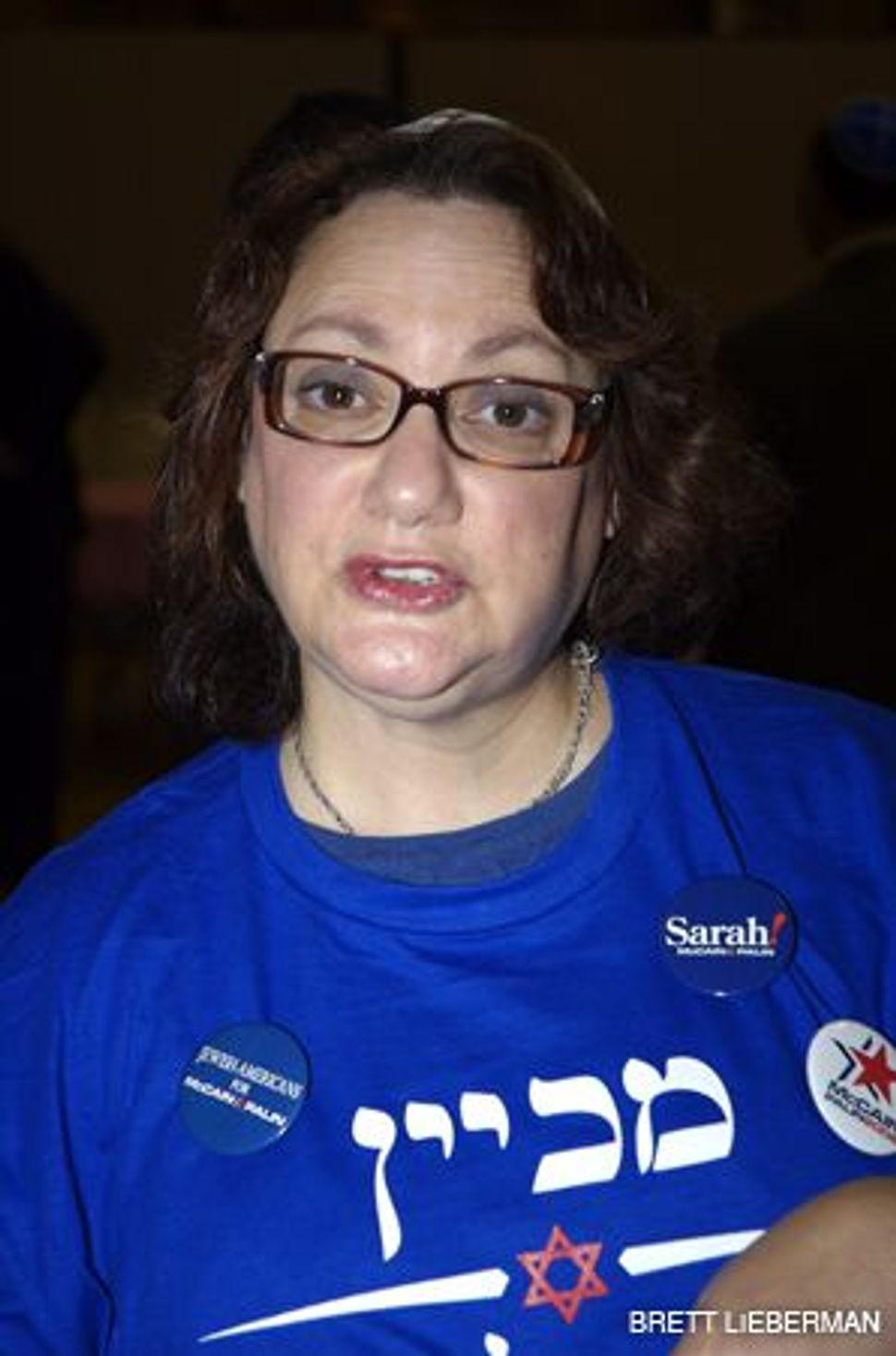 When Clare Kinberg, editor of a feminist Jewish magazine, set up her booth at an Ann Arbor Jewish community event, she didn’t expect to attract a parade of women eager to vent their rage against Sarah Palin. But woman after woman — perhaps noticing Kinberg’s Barack Obama pin —approached her to tell stories of how John McCain’s vice-presidential pick had galvanized them into becoming active in the Obama campaign. 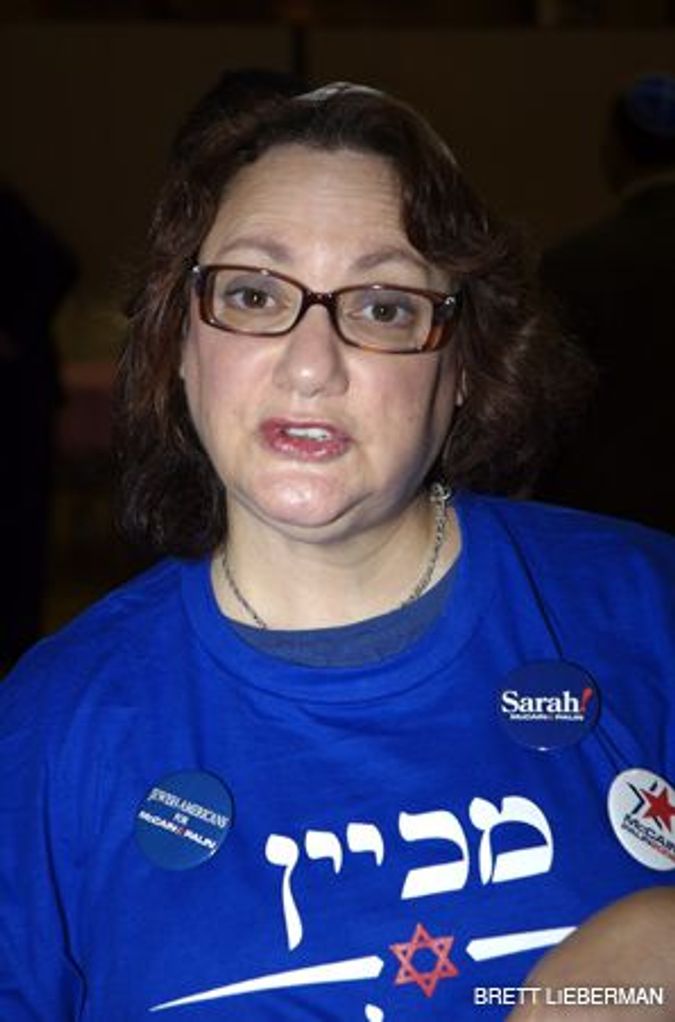 “She really brought out some ire, fear, something personal,” said Kinberg, who edits the magazine Bridges. “It was almost a visceral reaction that she represented something anathema against Jewish values, something very deep in their identity.”

On a political level, it’s no surprise that liberal Jewish women don’t like Palin — they are liberals, after all, and Palin is an avowed and unabashed conservative, in a heated presidential race. But the Alaska governor also seems to strike a raw nerve on a symbolic level for many Jewish women, drawing far more indignation than a male candidate with similar views, almost as if she offends their sense of who they are.

“It was the place in their identity where they are Jewish women,” Kinberg said of the angry voters who dropped by her booth. “People didn’t bring up specific things about reproductive rights or abortion or separation of church and state, but it was all of those things wrapped up together.”

Palin’s attempts to woo both women and Jews have made many members of both those groups resent what they see as unwanted advances.

Despite being a woman running for vice-president immediately after Hillary Rodham Clinton’s defeat in the presidential primaries, Palin has met with disapproval ratings from 45 percent of women (compared with 35 percent of men), according to a Time magazine poll conducted in early October.

And, despite having cast herself as a take-no-prisoners advocate for Israel, Palin has garnered an approval rating of only 37 percent of the Jewish electorate, according to an American Jewish Committee poll taken in September.

“In the same way I resent her co-opting a feminist message in order to achieve a retrograde goal, I resent her pandering to the insecurities of American Jews,” said Ayelet Waldman, a Berkeley, Calif.-based writer who has been volunteering full time with the Obama campaign.

For some, the antipathy toward Palin is located even more closely at the intersection of feminism and Jewish identity. “She’s the anti-wonk, the anti-intellectual, someone who doesn’t want to brook differences of opinion,” said Susan Weidman Schneider, the editor of Lilith, another Jewish feminist journal. “She is certainly not someone with whom I or other Jewish women I know would identify. There’s a real sense of alienation.”

For Schneider, Palin represents the opposite of what Hillary Clinton meant to many women during the presidential primaries. Schneider told the Forward several months ago that she believed Jewish women identified with Clinton to the point of almost reading the senator as Jewish herself, “the same way that some people imagined Bill Clinton, during his time in office, to be the first black president.” Even the negative stereotypes that stuck to Hillary Clinton—that she was emasculating or shrill—have also been used to tar Jewish women, while Palin has tapped into an entirely different set of signifiers.

The down-home charm that Palin projects in lieu of a focus on nuance or detail is particularly off-putting for many Jewish women, who are likely to be highly educated, urban, and upper-middle class.

“Most Jewish feminists are not part of the class base that she’s meant to appeal to,” said Alisa Solomon, a professor of journalism at Columbia University. “So when she’s deliberately dropping her ‘g’s and throwing out her ‘you betchas,’ that doesn’t appeal to us. We’re not the audience for it.”

More so than Obama or McCain, Palin seems to “read” in basically the same way across the political spectrum, with voters mostly in agreement about what Palin represents, but differing—vastly—in how they feel about those representations. Palin’s admirers among Jewish women, fittingly, seem to be concentrated most heavily in Orthodox communities, where her image as a religious person and an upholder of family values resonates.

“Most of the women I’ve talked to from my circles seemed to like her, at least at first,” said Baila Olidort, the editor of Lubavitch.com, the Web site of the Chabad-Lubavitch movement. “When she was first introduced, I thought, ‘This is terrific.’”

Olidort said that she has had second thoughts since Palin’s weak interview performances, and that she has not yet decided how she will vote—but that on an ideological level, Palin’s “views are aligned quite well with traditional Jewish views.”

Opinion on Palin seems to be split among Jews who are observant but not ultra-Orthodox—a swing-voting demographic that both parties would like to nab.

“People say, ‘Oh, she’s a creationist,’” said Judy Davidson, a resident of Downingtown, Pa. who describes herself as being in between the Conservative and Orthodox movements. “What she believes is what every Orthodox Jew believes. We love her.” Davidson runs a kosher sports-themed Internet café and sells Jewish McCain and Palin campaign paraphernalia on the side.

But, perhaps hewing again to class lines, Lynne Bermont, a professor at New York University who lives on Manhattan’s Upper West Side and describes herself as a fairly observant Conservative Jew, told the Forward that, “as a Jewish woman, I am most proud to be part of a tradition that valorizes ethical integrity and intellectual activity… Sarah Palin is antithetical to all of these values.”

Sarah Palin Hits a Nerve Among Jewish Women, But It’s a Raw One